Alice Bee: Hey Brendy. Why don’t you spark up a massive spliffer of weed-grass and join me here to talk about Life Is Strange 2: Episode 3. It’s called Wastelands, which I think might have a double meaning of some kind.

Brendan: Let’s recap: The Diaz brothers have so far suffered the following:

I think that’s everything. They should be okay now, right? 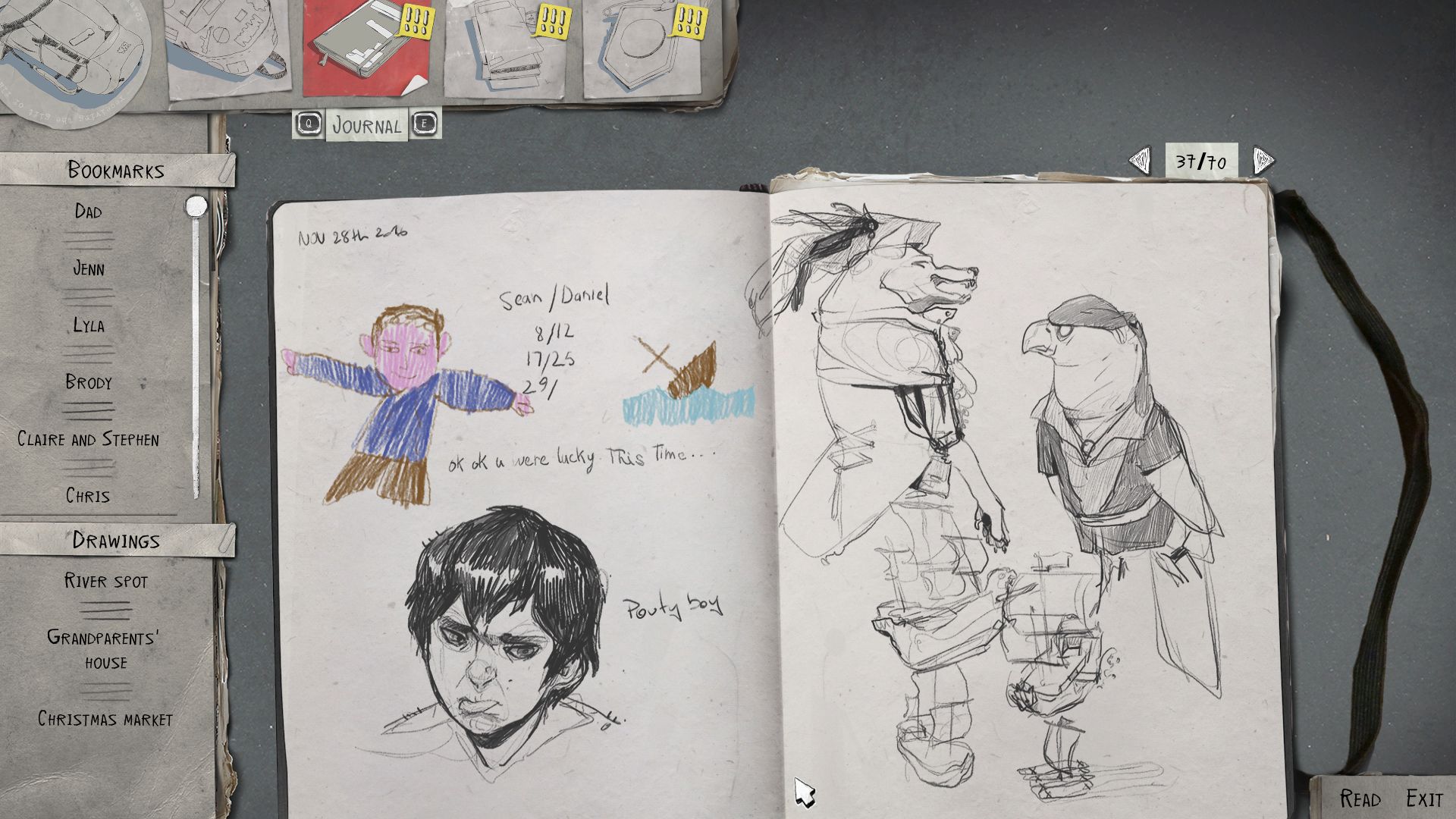 Alice Bee: One would hope! I was surprised because this episode opens with a sizeable time jump of a couple of months. It turns out that they’ve been living with Chekov’s Drifters in a commune in the woods, and working at a secret weed farm.

Brendan: It certainly drops you right into things. I liked that. Sean Diaz wakes up in a tent and the first thing you note is how shaggy and long his hair is, and how grubby his clothes are. I’ve learned to check the journal as soon as I start these episodes, because it’s full of fill-in-the-blanks drawings and a little map showing the boys’ journey.

Alice Bee: I think I liked this episode the most so far, but sort of because I had the strongest reaction to it. I just hated that Finn dude so much. Hated him. And I enjoyed hating him.

Brendan: Ha ha. White lads with dreadlocks are a surefire way to make 99% of your audience go “ugh”.

Alice Bee: He’s just the worst! This de facto leader of a group because he spouts stuff that sounds almost meaningful! And he totally turns Daniel against Sean. I thought it was a good… not exactly a parallel to the brothers, but an image of what they could become, almost. The Weeders (as I thought of them) are a bunch of almost-adults suffering a kind of arrested development, but to the Diaz brothers they sort of seem like sensible grownups to emulate. 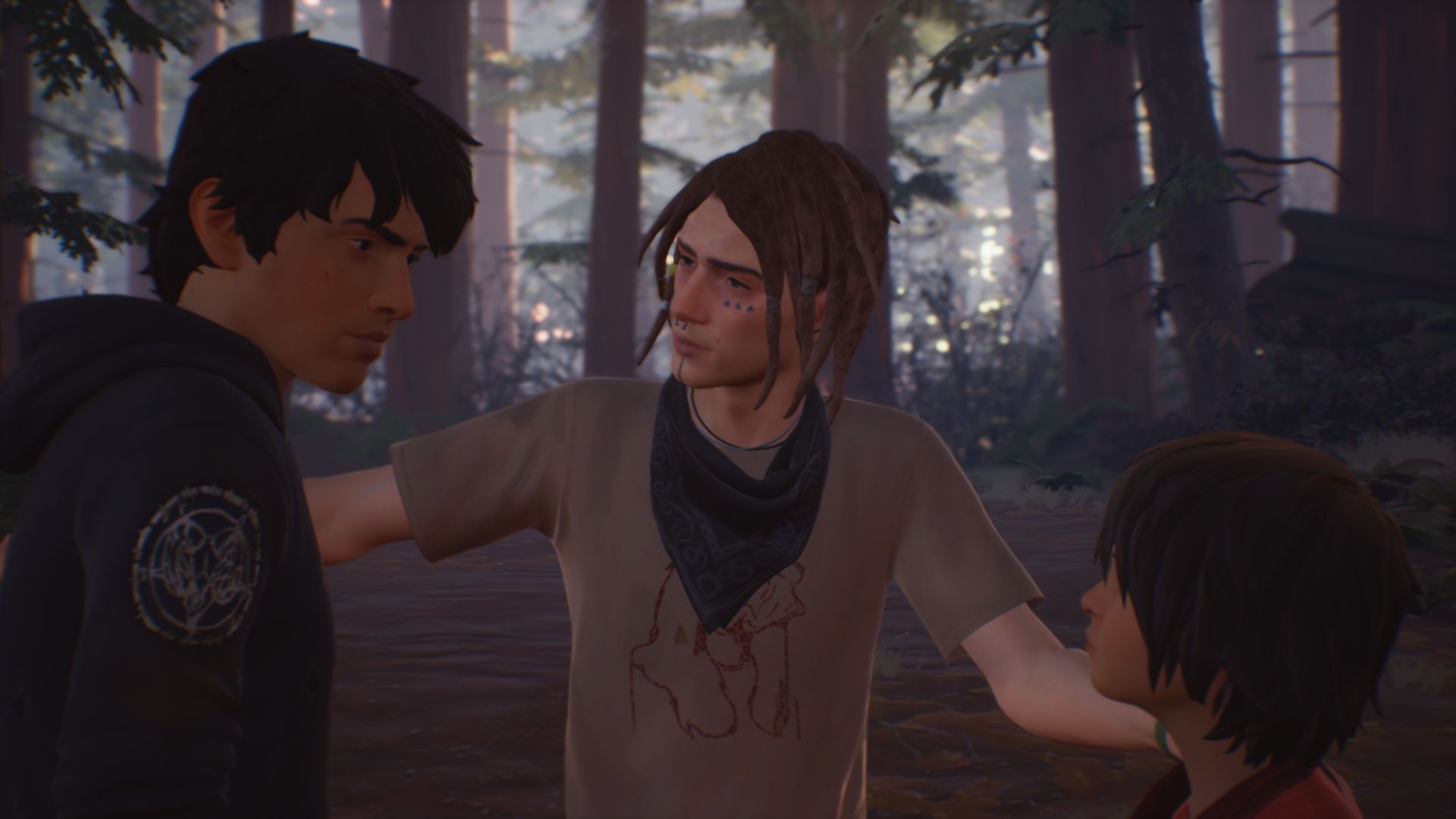 Brendan: I didn’t dislike Finn so much, because I felt like he was a well-observed character. So far this has been the episode where I looked at the characters and thought: “Yeah, that’s a person I know.” I was glad there were so many new faces around this campsite, and they all bounced off each other. It felt like a really low-stakes Walking Dead from Telltale in parts, but with a Danish couple arguing in the back of a pick-up truck instead of two angry dudes pointing guns at each other.

Alice Bee: There aren’t zero angry dudes pointing guns. I think my main complaint about this episode is Merrill the drug farmer and his henchman. The conflict with them seemed a bit bolted on, or at least less thoroughly thought out than the Weeders.

Brendan: Good point. Merrill was rubbish, he was just this bad drug dude who never really had a motivation (that we could see) to be bad. Like, you hear some phone calls and stuff he’s having with his clients (presumably even badder dudes) but that doesn’t give him much reason to be as pointlessly ruthless as he is towards the end.

Alice Bee: Yeah he’s really mad at Daniel just, like, being around, which culminates in the Diaz brothers getting fired and everyone else not getting paid for that week. So then the arbitrary climax is Finn using Daniel as a safe exploder in a plan to steal all Merrill’s money. Did you agree to the plan or not? 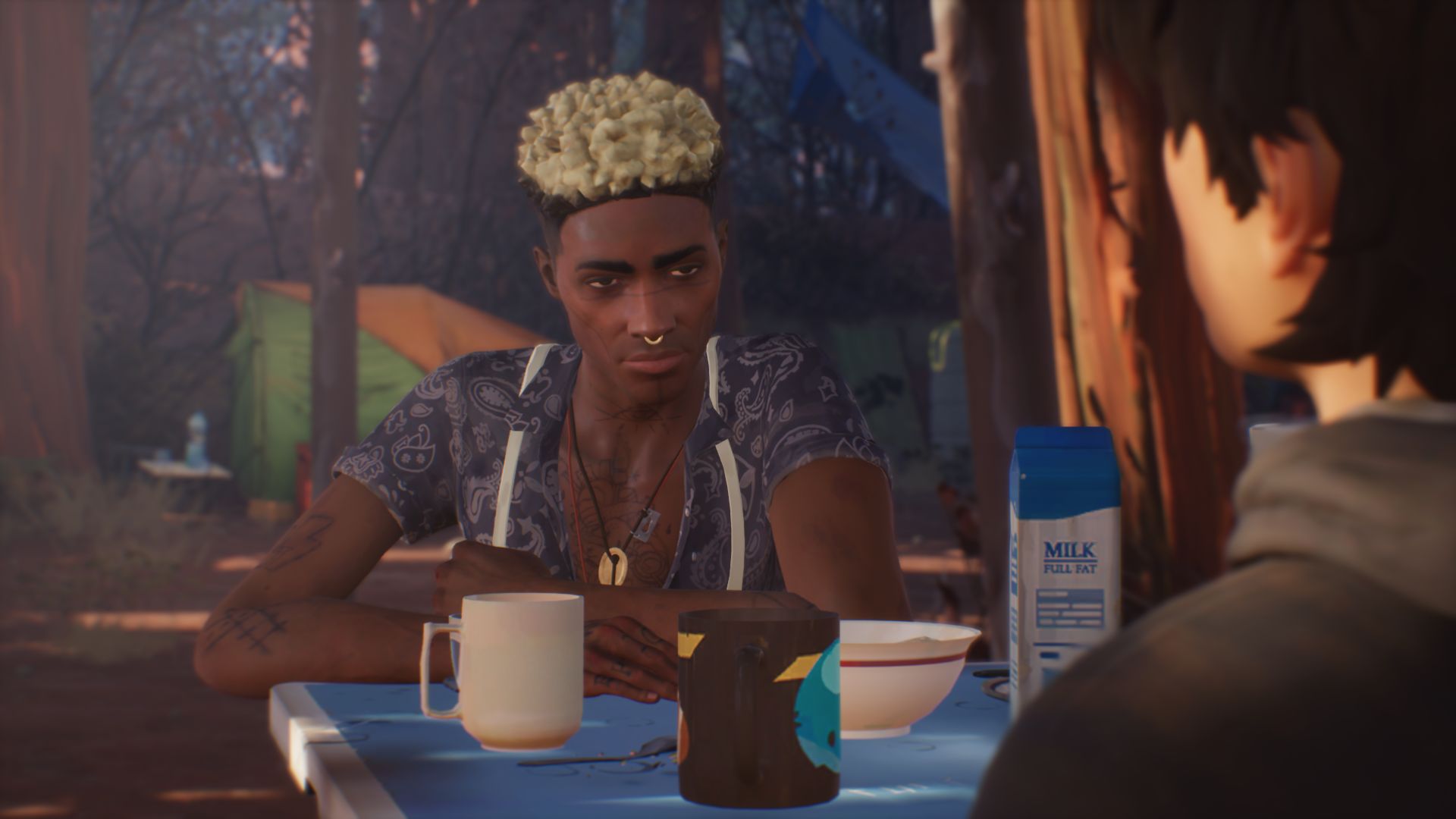 Brendan: I said: “Naw thanks mate I’d rather not get my brother shot in the eyes cheers”. My exact words. But then of course, this is a halfchoose-your-own-adventure story, so it happens anyway.

Alice Bee: Yeah I already knew Finn was going to go full softboi-scumbag anyway. I didn’t realise you had the option to sort of romance him until the end, though. Like you can either smooch him or Cassidy the guitar player.

Brendan: I got very bi vibes from him the moment he was throwing knives.

Alice Bee: Ah yeah, I was just looking at him as a secondary villain, and therefore didn’t think Daniel would be exploring sexuality with him. SPEAKING OF.

Alice Bee: Yeah! Cassidy took Sean skinny dipping, and I kept trying to remember how old they both were! And then she invited Sean into her tent and I was like “Okay little man, this has gone too far at this point, you deserve better” so said no. And she got arsey! Like, excuse me, I’m trying to teach Sean that he has boundaries that should be respected here. 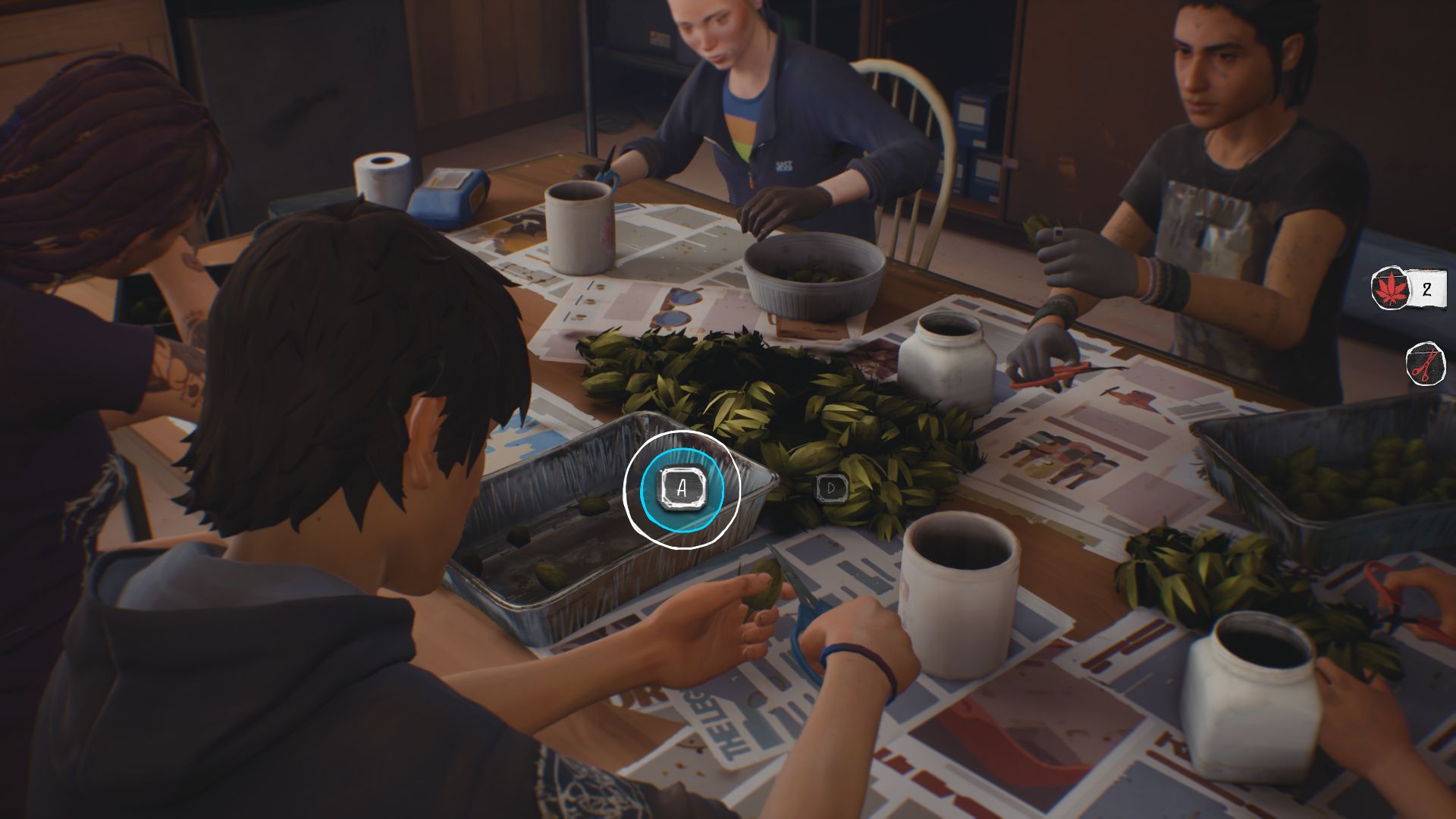 Brendan: Ha ha. The stats at the end tell you that almost everyone kissed the crusty hippy girl, but something like 45% of people drew the line at the tent zipper. I bowled right in. He’s a young lad. He’s out in the woods. His little brother can explode trees. He’d do it.

Alice Bee: That doesn’t mean that he should, dammit. Also she is a terrible tattooist. She gives him a shitty scratcher prison-style tattoo and then takes him swimming! That’s literally the first thing they tell you to not do when you have a fresh tattoo. After “do not get a tattoo from a grubby wood hippy”.

Brendan: Did you get a cool wolf? I got a rubbish tat of some trees. I can’t wait for episode five when Sean looks at his arm and says “this was so dumb” to himself.

Alice Bee: If they don’t make it a smeary infected mess after he went swimming the developers are cowards.

Brendan: There were some moments I really liked with this group of knobheads though. I was proper nervous when they started playing this form of “truth” around the fire. Well, more like, “everyone share a trauma”. It reminded me of being an underage drinker in the woods and sitting around some logs with people you only sorta-know. Uncomfortable, but still wanting to be there. It was a very teenage moment, and since the developers often don’t hit the notes of teen life quite right, it was one of the better bits. It shows they can get it. 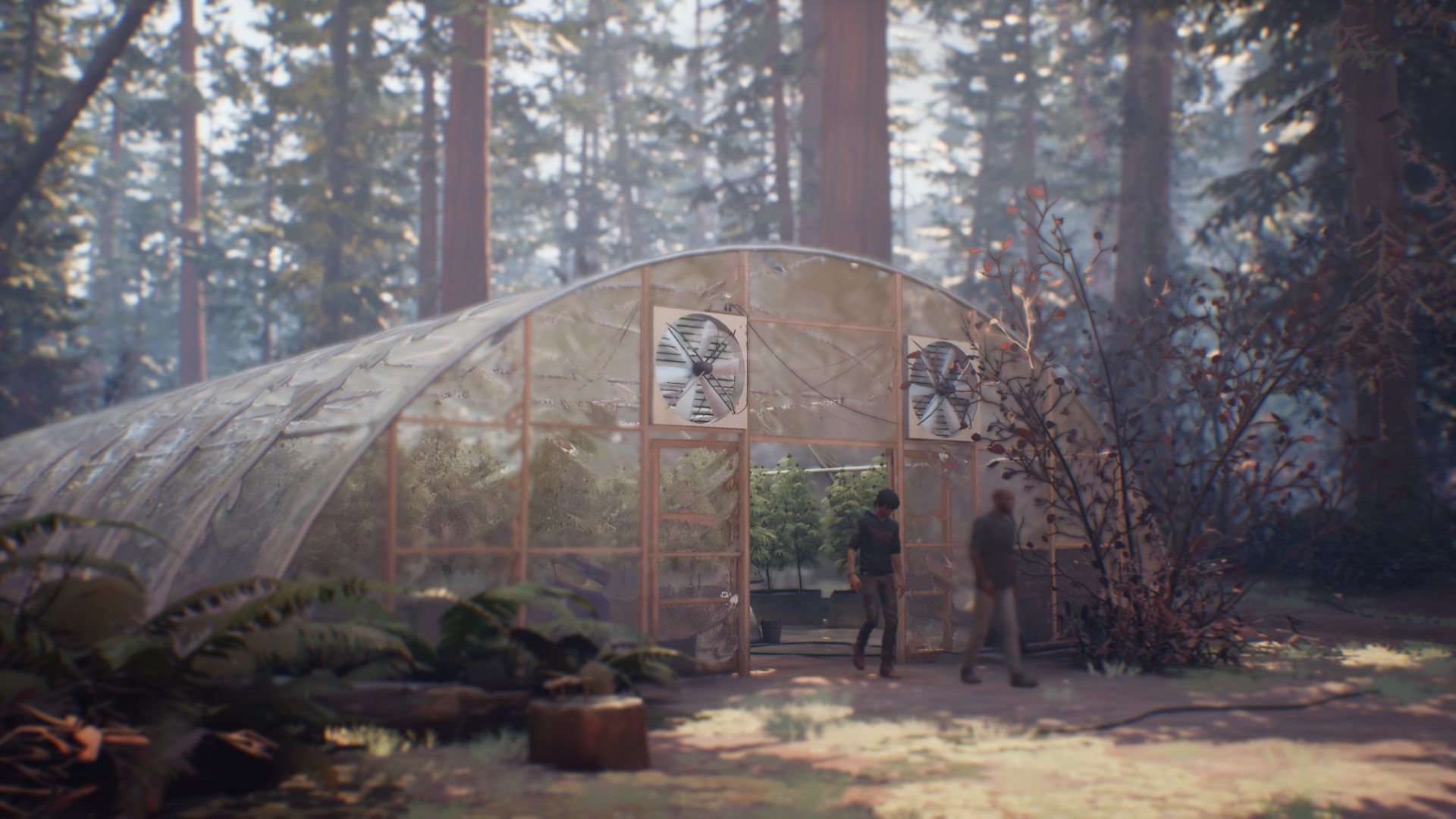 Alice Bee: I think this episode made me realise the game is for people our age and what our teen years were like, and I can’t believe it took me this long. It was when one of The Weeders said she’d had a dog called Black Flag and I was like “Ohhh, that’s a reference for people in their 30s.”

Brendan: This would also explain why Sean has the musical taste of a 2000s-era university student.

Alice Bee: Yeah exactly! But I agree, I think that scene and the characters of the group were good. I wish some of them had developed a bit more. In fact, it would have been cool if the conflict that eventually makes Daniel asplode was within the group itself, and there was no weed farm to deal with.

Brendan: Aw, yeah. Just straight-up angsty friendship drama. But then how could we play a stupid quick-time event minigame about cutting weed plants?

Alice Bee: Oh my god the weed mini-game. I forgot about that, and I even warned you about it ahead of time. 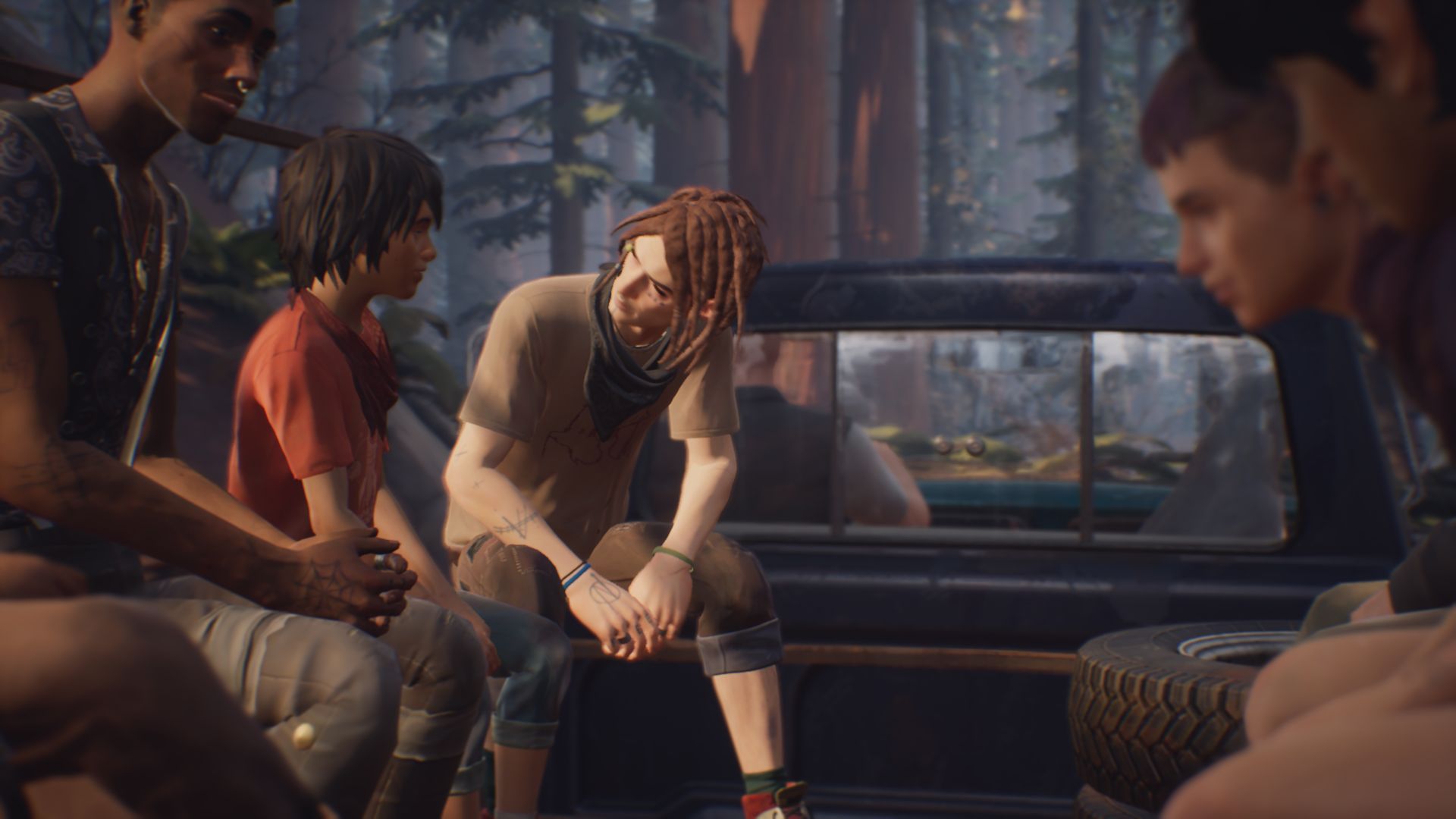 Alice Bee: I will tell Graham to put that in your annual appraisal. Which ending did you get, though? Because I have no idea how you’d get one that wasn’t a total nightmare.

Brendan: For me, little Danny Diaz gets shot in the shoulder and throws one of his telepathic wobblers. Everything in the weed farm’s cabin explodes into splinters. And poor Sean gets a big ol’ piece of glass in his left peeper.

Alice Bee: Same! I got Daniel to stop Finn getting shot. Although afterwards I was like “I have no idea why I bothered or cared.” At this point it’s starting to remind me of Looper, or Deadpool 2, where there is an innocent child who could become destroyer of worlds. But it also felt like the ending was very funnelled this time, like there was no right answer, and I wasn’t a massive fan of that.

Brendan: I liked the melancholic morning after scene, but yeah, I think this has been my favourite episode because it went from “superhero bros on the run” to being more of a bildungsroman for Sean. And if it ramps up the psychic powers stuff from this point on, there will likely be less of that. Which would be a shame. Anyway, I’m done talking about this. Fancy a toke?

Alice Bee: Yes mate. I’m getting a contact high just from writing in a shared document with you.