If you click on a link and make a purchase we may receive a small commission. Read our editorial policy.
Premature Evaluation is the weekly column in which Steve Hogarty explores the wilds of early access. This week, he's attempting to reintegrate into functioning society by becoming a lumberjack.

January. Hell month. My powerful brain – usually a throbbing, high-performance organ capable of doing several sums per minute – has atrophied to a wet walnut, a sodden grey scrap of cauterised flesh that ricochets around inside my skull like a horrible slug. The excesses of the holiday season have left my wretched body brittle and hollow. My eyes are sunken into my cadaverous face, like somebody launched two bad grapes as hard as they could at some uncooked bread. There is only one reprieve from this cursed month, and that is to become a lumberjack. Don’t try and stop me.

Lumberjack Simulator joins Farming Simulator and Woodcutting Simulator in the increasingly crowded lumberjack simulation market and is, without a doubt, one of the three lumberjack simulators I have ever played. This is a simple game in which you, apparently the only human being left alive on the planet, are doomed to traverse a brown terrain mesh in search of man’s tallest and most ancient wooden foe: the tree. Once one is located (they tend to move in herds) you must attack it with the lumberjacking implements at your disposal until the trunk is compromised, sending this moisture-wicking arboreal freak from the arrogant vertical to the shameful horizontal in one humbling Pythagorean arc. 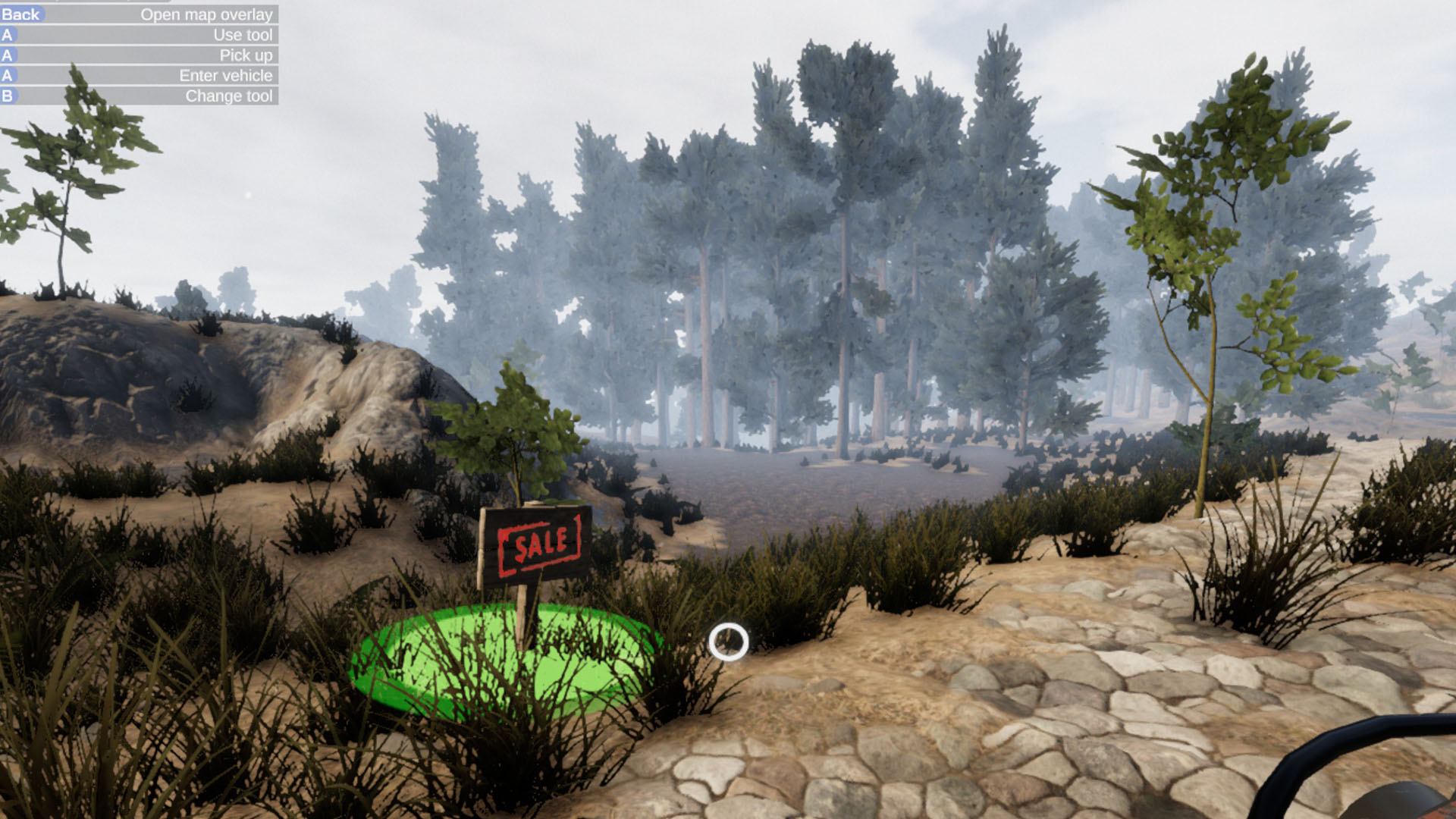 Of course, making light entertainment of felling thousands of innocent trees is perverse in the context of all the real world deforestation we’re currently facing. Vast swathes of the Amazon are being razed to the ground each minute to satisfy the spiralling demand for chopping boards and hamster bedding, yet here Lumberjack Simulator normalises the unfettered environmental destruction required to feed the insatiable capitalist machine that, like some demented Bertha*, vomits cash for billionaires and turns the sky into poison.

Not only that, but the loading screens display a bizarre series of pithy truisms about lumberjacks too. Things like “lumberjacks are respectful of themselves and others”, “lumberjacks give away a portion of their wealth to the less fortunate”, “lumberjacks try to solve problems before asking for help” and my personal favourite, because it hints at some untold backstory between this game’s author and a lumberjack, “lumberjacks are loyal”. This breathless venerating of the profession is nothing short of revisionist, pro-lumberjack propaganda, a brazen attempt to whitewash the role lumberjacks have played in the unsustainable harvesting of trees for their precious tree flesh. 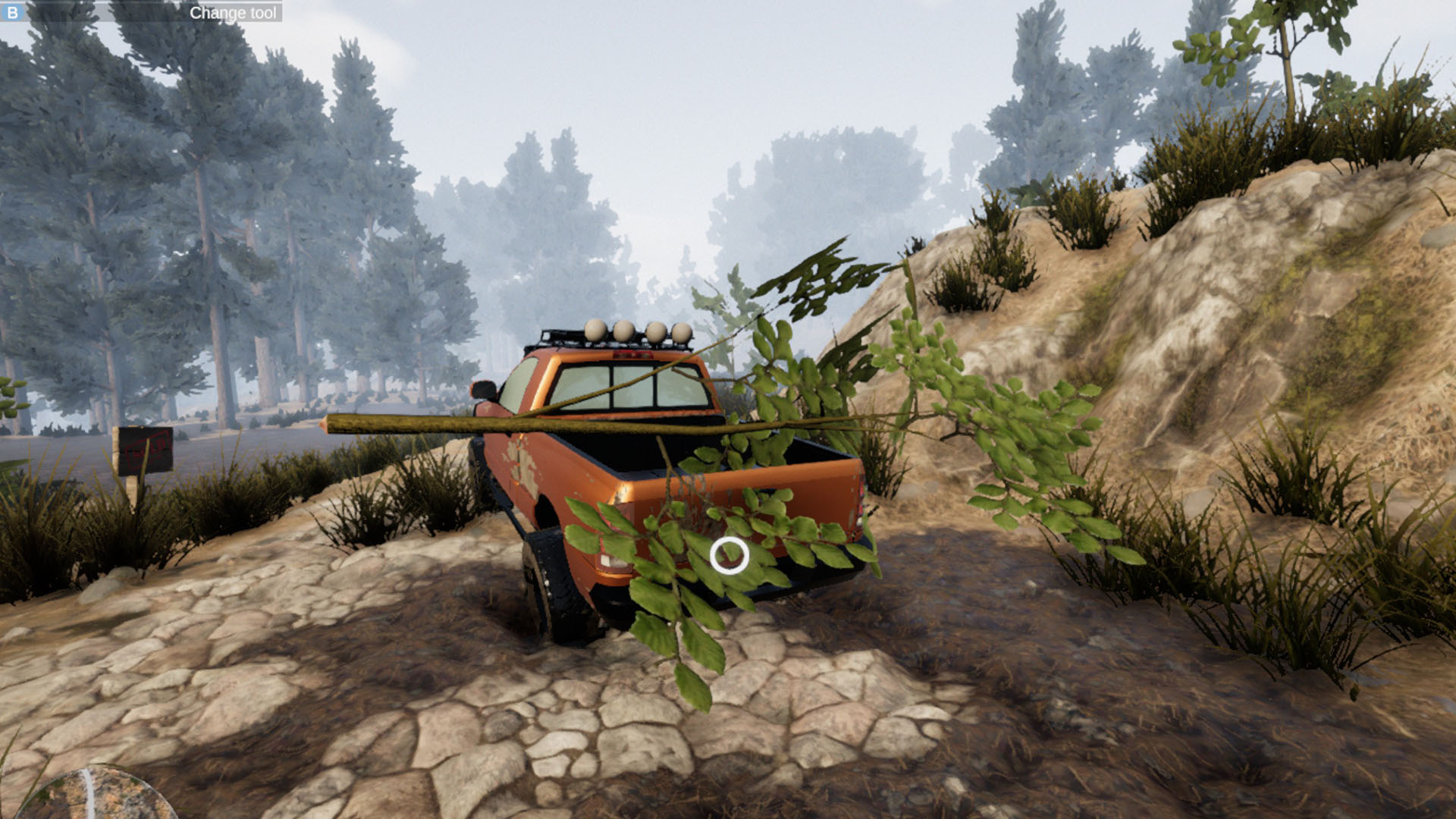 But let’s be pragmatic, this is Lumberjack Simulator and lashing yourself to the trees in protest just isn’t an option, so off you go to work. Before you can jack any lumber you must navigate to a designated logging area demarcated by a glowing green rectangle, first traversing muddy terrain which deforms realistically beneath your chosen vehicle’s chunky tyres. Your tree snatching tractor sinks believably into the soft earth, leaving behind deep furrows as it churns up the wet brown dirt. Your truck has to switch between gear modes to keep traction, lest it splodge to a sloppy halt, rim-deep in nature’s own sodden gunk.

Don’t get too excited. Lumberjack Simulator doesn’t come close to the dizzying kind of mud physics seen in the current class leader in real time slurry deformation, Mudrunner (née Spintires). Your tyre tracks don’t combine with one another over repeated trips to form impassable ditches to be circumnavigated later on. There are no rivers to forge, tyres to deflate or suspensions to tweak. Mud will stick to the wheels and chassis, but the vehicles don’t sustain any damage, won’t sink very deep and will jerk about like dying fish with every sudden movement of the steering wheel. Mudrunner’s mud is dangerous and wild, an unpredictable stew of soil and rock. This mud is more like the marmalade puddles in the breakfast table level of Micro Machines: ineffective and predictable, slowing you down uniformly. 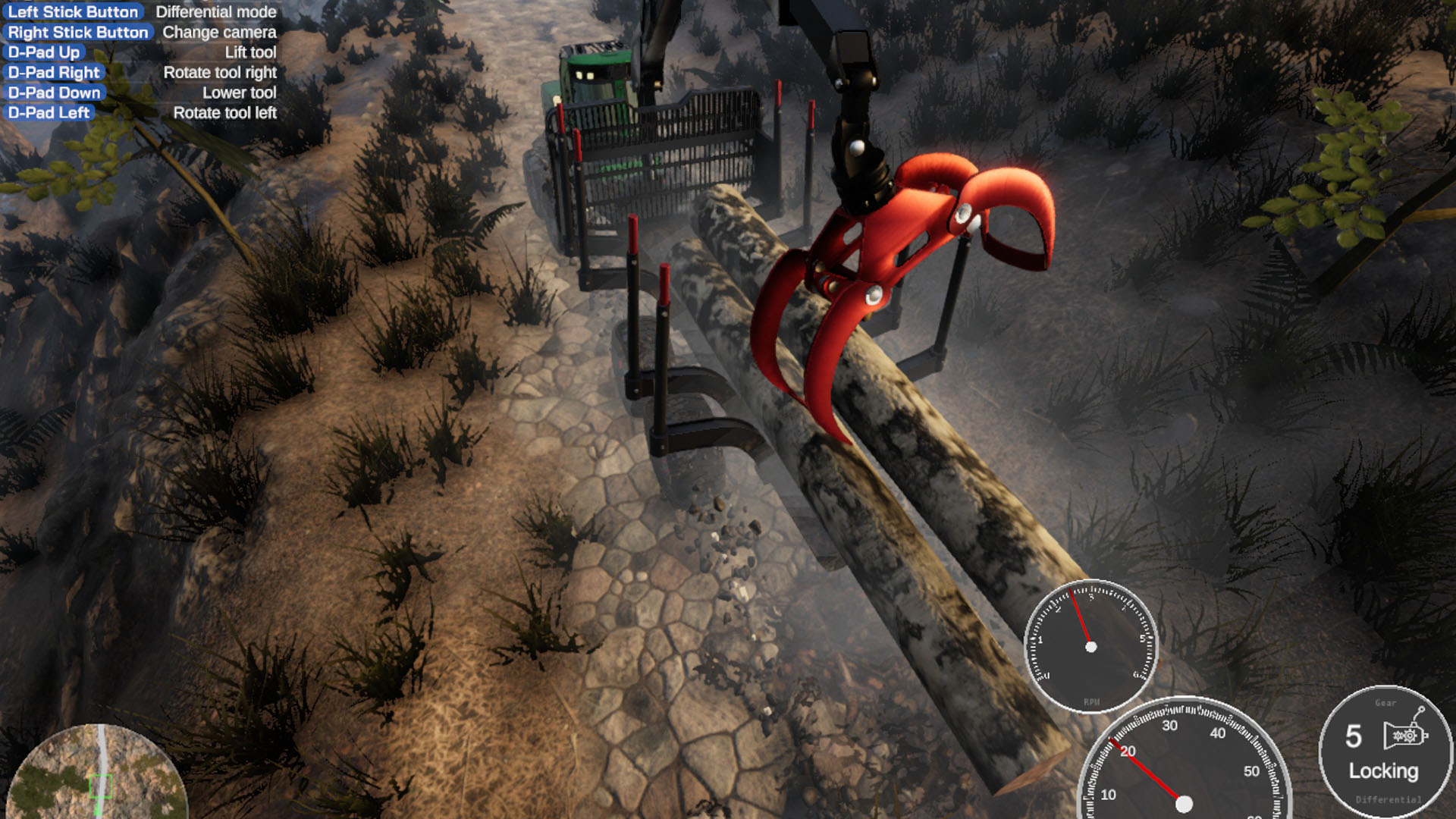 These relatively rudimentary physics also wreak havoc when you get down to the sorry business of lumberjacking. You’ve got half a dozen different means of actually chopping down a tree. Depending on its size you can have it at with your hand axe or chainsaw until it topples over, after which you can drag it about the forest, manhandling it into the back of your pick-up truck with your invisible ghost hands in full view of all of its mates.

You’ve also got a series of specialised lumberjacking trucks and tractors, each with its own medieaval torture device bolted to the front. These guys can latch on to felled tree trunks like they’re fairground grabber prizes, or grasp them inside their bear trap-like claws while they simultaneously buzzsaw through the tree’s base, like some giant QVC kitchen utensil. You can prune off awkward branches once a tree is down, ready for loading into the game’s off-road hauler, before you ferry your wooden prize back to base to be sold. With the cash you can buy upgrades to your vehicles, to head back out and repeat the process until you’re satisfied, though these improvements don’t do a whole right now. 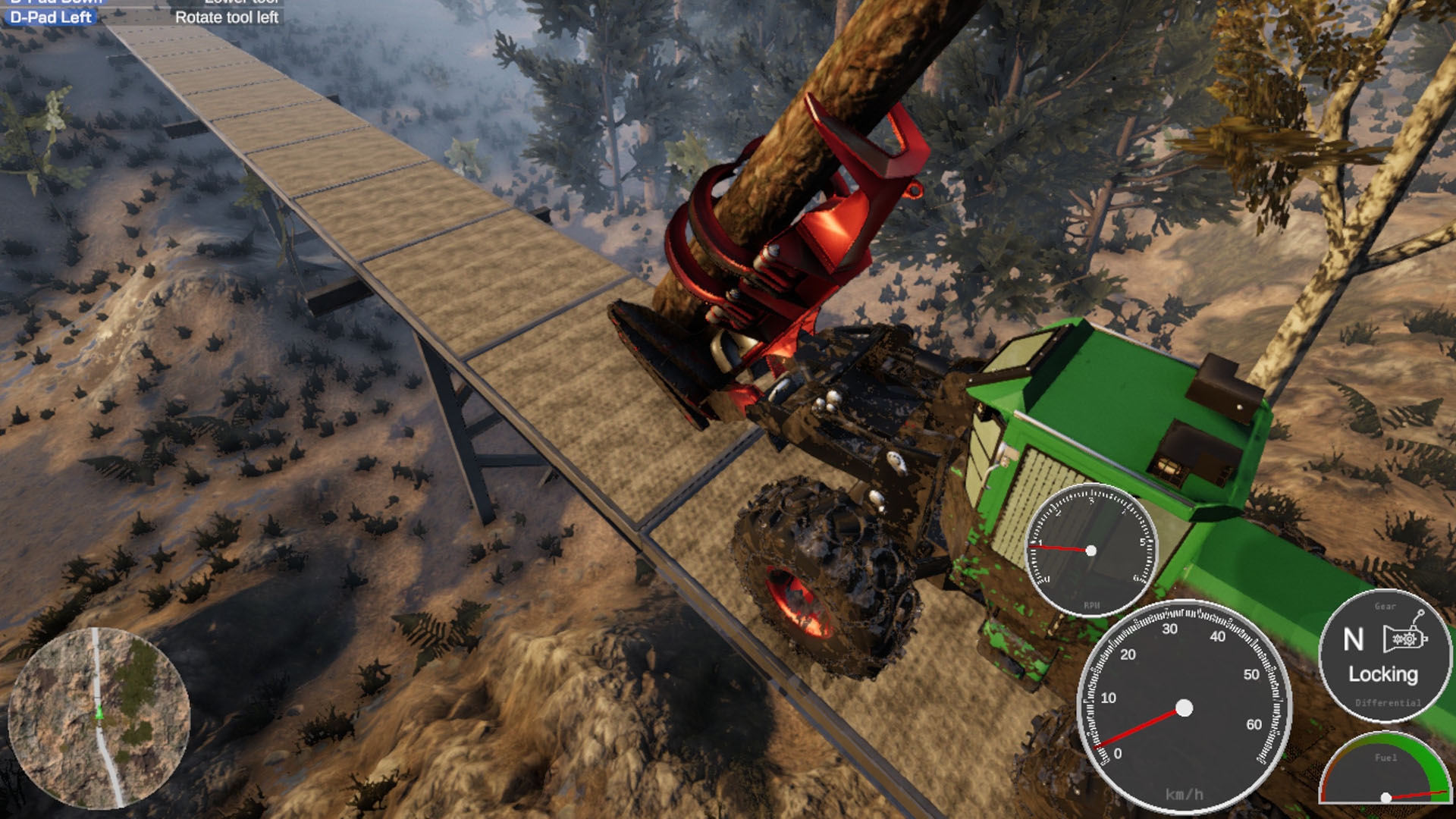 There is an IKEA bookshelf-thin veneer of a serious simulation here, but Lumberjack Simulator is scuppered by wonky, floaty physics and – a far more serious concern for a lumberjack simulator – an unrealistic depiction of what forests actually look like. Maybe it’s to provide a small sense of jeopardy when hauling logs across the muddy terrain that there’s no option to properly secure your load either, which seems to directly contradict the characterisation of lumberjacks in the loading screen messages.

Far from the altruistic, self-caring problem-solvers the developer assures us that they are, Lumberjack Simulator depicts lumberjacks in their purest sense: socially outcast risk-seekers with little regard for workplace safety regulation, subconsciously longing for the day they are finally pulverised by an unsecured log.

*Bertha is a British children’s television programme from the 1980s about a possessed factory machine and the unfortunate men and women condemned to work with her.