If you click on a link and make a purchase we may receive a small commission. Read our editorial policy.
Oh! We survived yesterday! But what worlds are here to greet us on Post-Apocalypse Day as we stagger, blinking, into the light?

It has become increasingly difficult to play games that aren’t about the end of the world. The apocalypse and its chaotic aftermath has grown into a collective obsession. We seem to have a cultural fascination, desire, perhaps even lust, to see things burn, violently breaking with the past. Even games that weren’t originally about living in the end times, like Minecraft, have been twisted into apocalyptic shapes.

Minecraft’s 2b2t server is notorious for its unprecedented levels of destruction (and for its offensiveness). It offers players a “neverending” sandbox that’s existed for almost five years, with “no rules”. That’s half a decade of Armageddon. This is gaming’s ultimate badlands, a fiery place of eternal apocalypse where the bombs are other people.

When I think of Minecraft I think of gently rolling hills and jolly cooperation, not wastelands and intense hostility. I used to consider the places conjured up by Minecraft’s algorithm as twee. Imagine my shock upon entering a world where the entire ethos is aggressive and persistent anarchy.

My first experience of 2b2t was with queuing up to enter. That’s right: please form an orderly queue for anarchy. 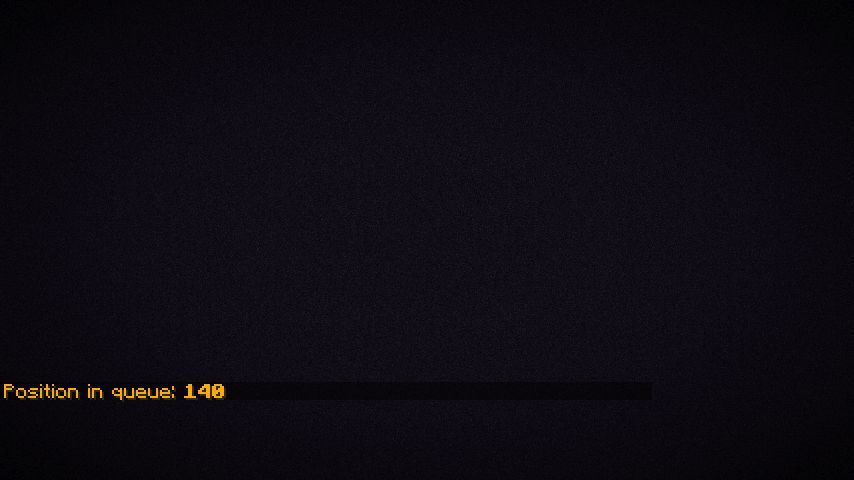 After an hour or so of waiting, I spawn into the world. There’s instant confusion. I had expected a wasteland, just not an underwater one. I’m hit with the combined horror of gaming’s worst water levels. I clamber up a series of falls which cascade down to the bottom of the world from what used to be ground level.

I can already hear explosions. I imagine some scoundrel dropping TNT from above. I later realise the booms are caused by Ghasts, one of the game’s more dangerous creatures. At some point in the server’s lifespan they were taken out of their natural environment and placed at spawn to greet newbies. 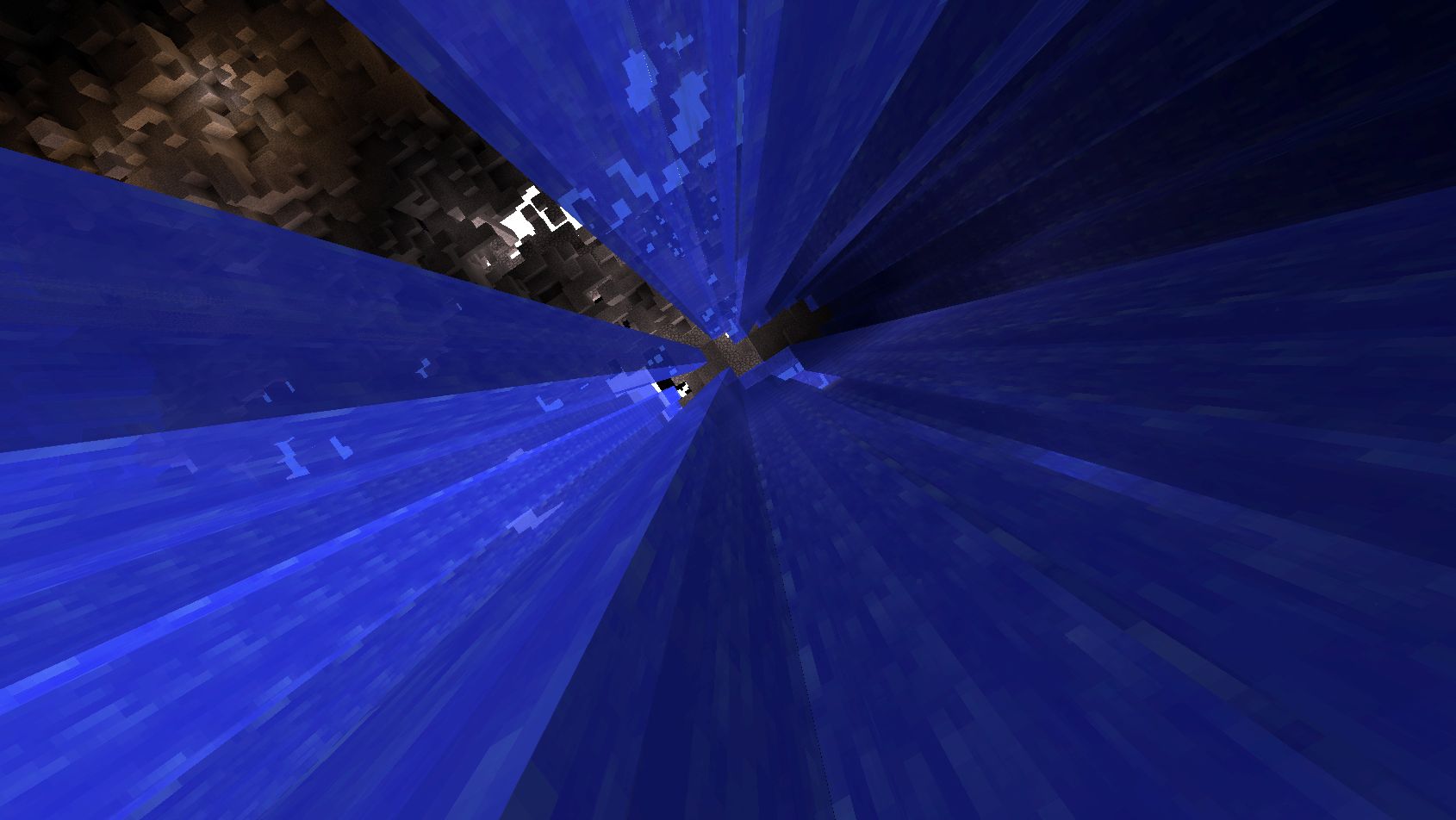 I continue to climb the waterfall, away from my sunken place and towards light. I feel like a slippery Keanu Reeves being birthed into a dark and horrible world. Topside, things are no less hostile. The spawn area is mainly open space, the landscape having  long ago been blasted to smithereens. Now there are just floating blocks and the kind of unnatural geometry Lovecraft got off on. There is an endless number of makeshift bridges, platforms and stairs that people use to try to escape the shattered wastes.

After some time hopping from platform to platform I find a portal to the Netherworld. Before joining 2b2t, I read that these gateways were vital for survival. This is because for every step you take in the Nether, you travel 8 in the Overworld, making it an easier way to escape the chaos of spawn. Of course, 2b2t has been around for so long that the chaos has spread far and wide -- and so the distances you need to go in order to find safety, let alone an abundance of life, are great. 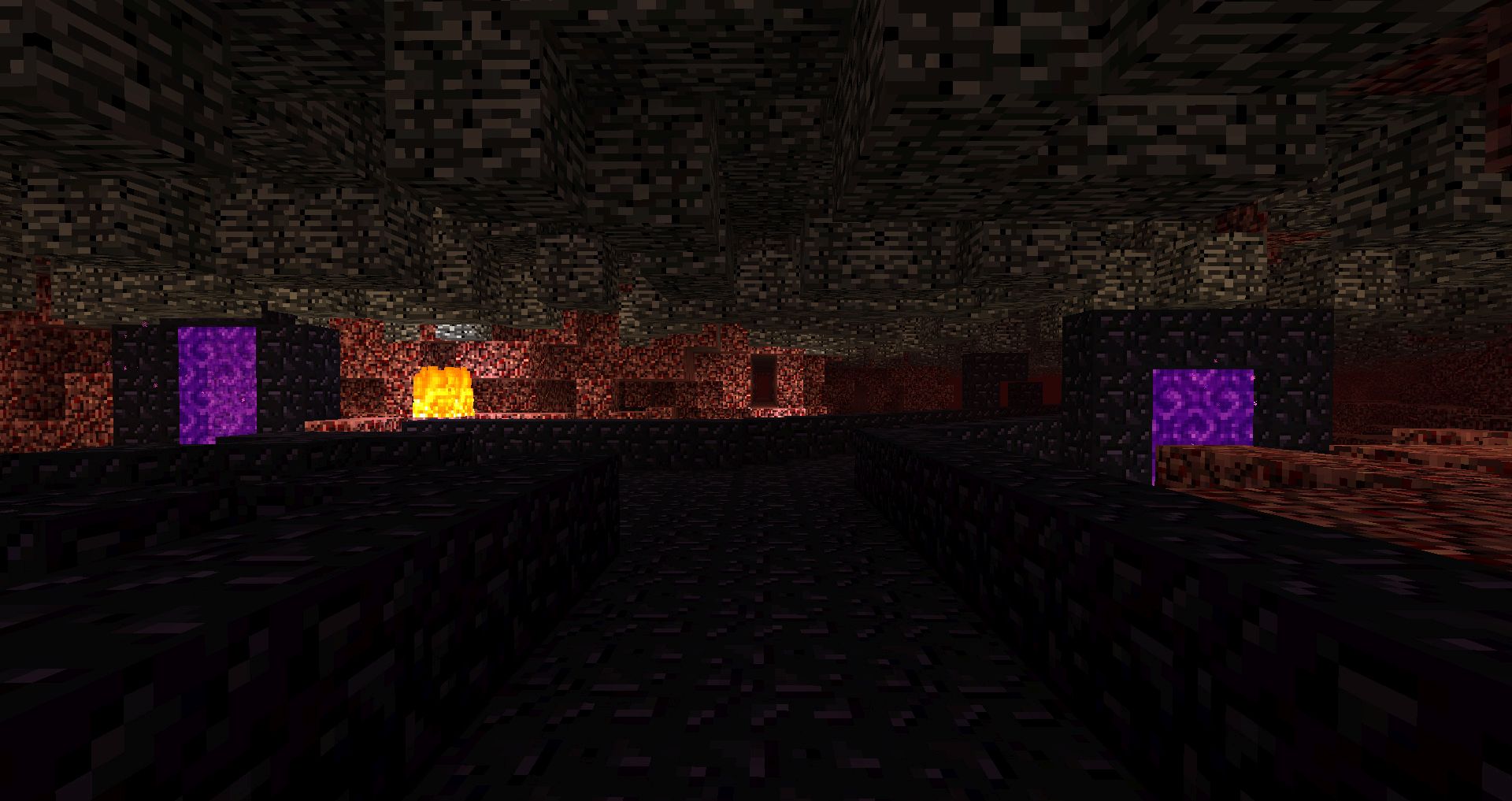 Once in the Nether, I find a network of obsidian highways that have been created by players over the years. Essentially, the highways were a vast transport network that led people to different parts of the map. Every so often on my path, there’d be a portal, like a bus stop, that would take me back to the Overworld. I was reminded of Stargate -- each portal representing another pocket-world.

On one world I find a strange arrangement of standing stones. 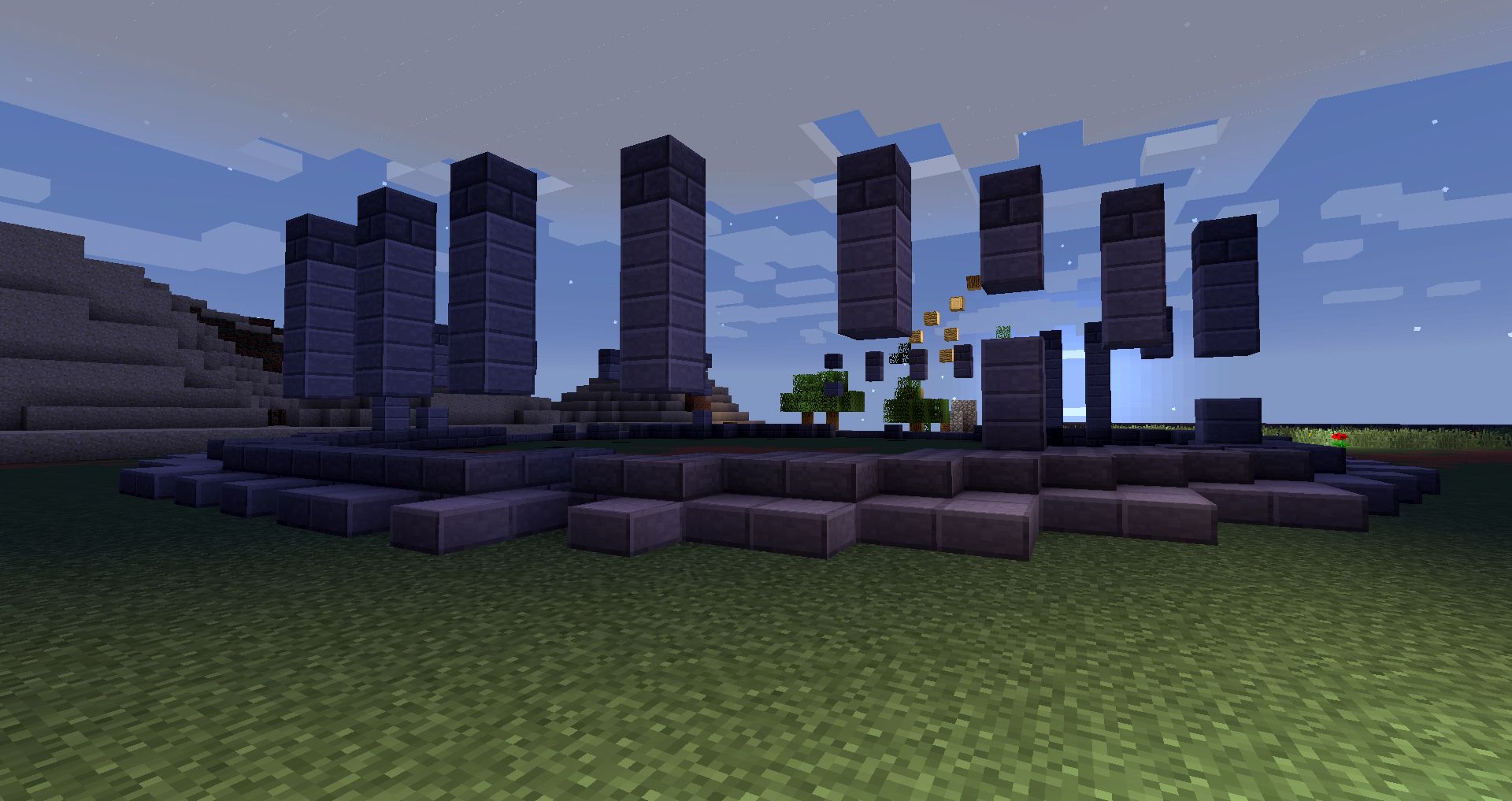 On another, a small farm to aid travellers. 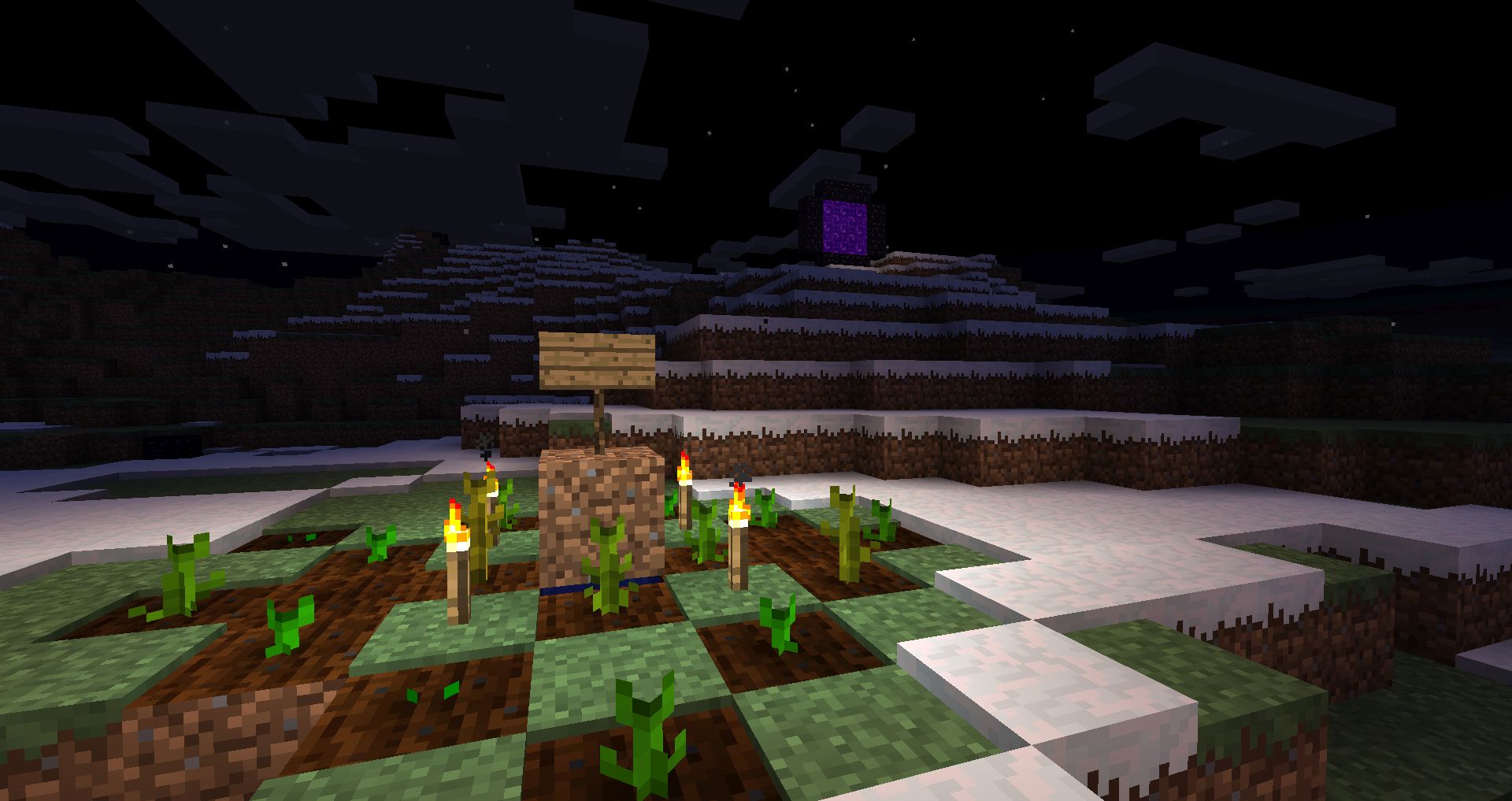 Then a ruined fortress, empty and broken. 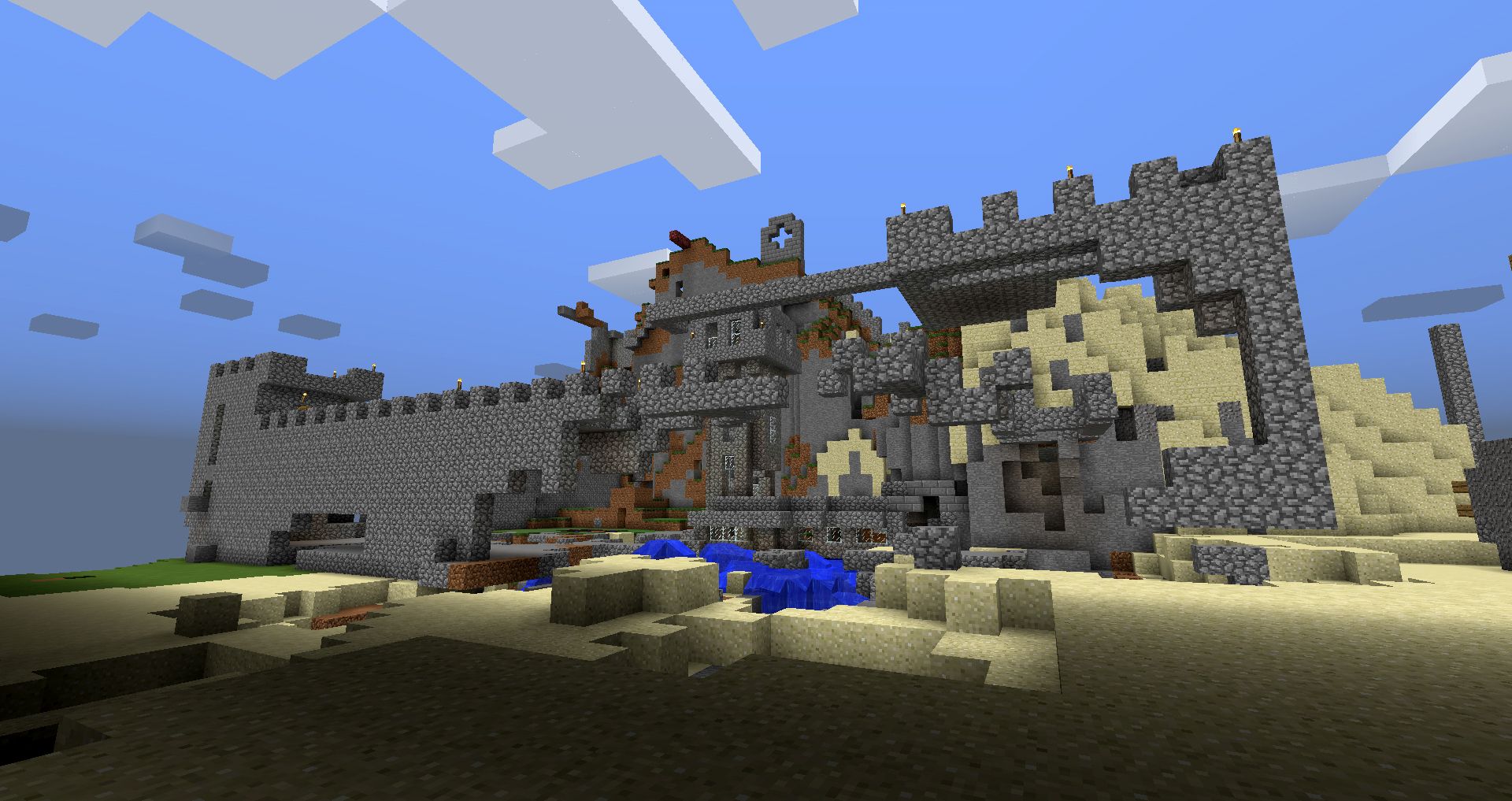 I started to see what drew people to 2b2t. The persistent world and all of the destruction had created these layers of history and an abundance of archeological sites. This was ruin lust material.

Of course, hostility caught up with me. The farms I came across were barren, and even though I’d escaped the initial chaos, each place I visited was bare and lifeless. I starved to death on some cold, tundra world.

When I tried to find my way back to the Nether, I realised I had been lucky in my first foray. Every portal I attempted to use now took me to my death. Some unnamed miscreant was blocking the Nether side of the portals with obsidian, so that when you warped in you were instantly entombed. One time, my captor broke me free, only to pummel me to death with a golden carrot.

This portal-sabotage happened countless times, on several attempted journeys. At one point the creepiest thing in Minecraft was the goofy-green creature plastered on lunch boxes and school bags. Now, on 2b2t, I’m hounded by a killer who seems to know my every move and derives pleasure from burying me alive. 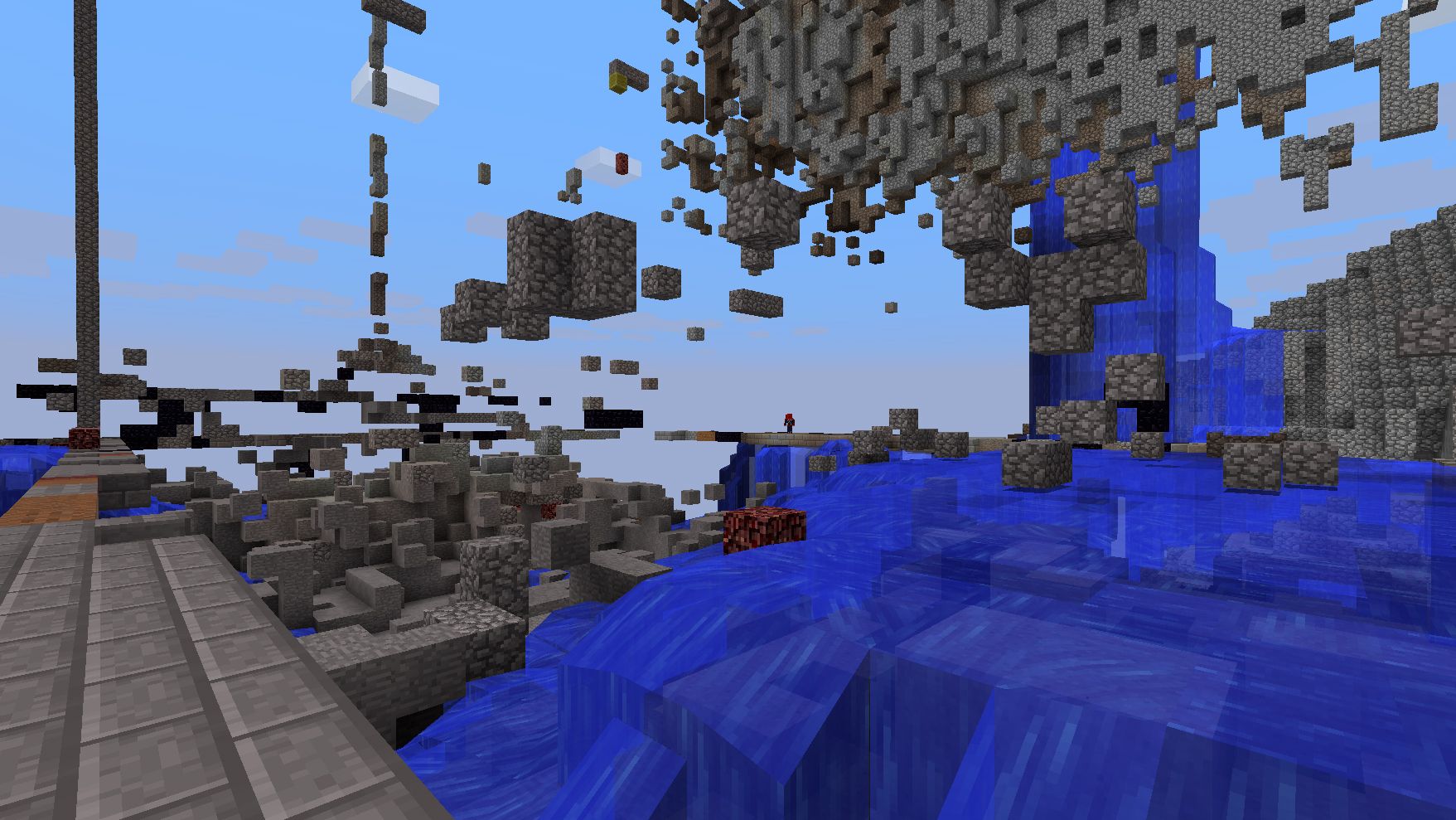 Destruction always seems to work best in sandboxes, and Minecraft, in many ways, is the ultimate form of that. Picture a bigger kid stomping over your elaborately constructed sand castle, cackling all the while. Now feel him knocking you down and force-feeding you a sandwich. Post-apocalypses are a kind of escape fantasy, and much of this is down to the freedom these worlds can offer. This is Fight Club territory -- men burning all their worldly possessions, abandoning civility in order to follow a primal drive for old-fashioned face-pummeling. These virtual worlds give us a taste of Emperor Palpatine’s “unlimited power!”

Post-apocalyptic spaces are a kind of blank slate. We log onto these worlds to assert control we often lack in reality. Alongside physical catastrophe, where land and buildings are left derelict, we see societal ruin. 2b2t is a grand experiment in this regard. Taboos are aired (frequently via homophobia and racism in text chat) and societal norms are cast away. There is evidence of groups forging new worlds -- seen in the farms and highways -- but there is also the temptation of a different flavour of individual liberation. The post-apocalypse takes place after the final judgement, perhaps this is why some see it as an opportunity to stalk, grief, murder and destroy with abandon.