If you click on a link and make a purchase we may receive a small commission. Read our editorial policy.
Main Assembly review
A robot building puzzle game that cruelly exposes the limits of your own rapidly atrophying imagination.

Main Assembly is a physics-based puzzle sandbox in which you build specialised robots to carry out different tasks, like ferrying a washing machine across a busy railway track or rescuing crash test dummies from burning buildings. It’s a kind of Kerbal Everything Program, powered by a comprehensive suite of easy-to-use creative tools that let you construct pretty much anything you can imagine: spring-loaded catapults, rocket-powered doodads, spinning whizzbangs, a motorised penis that twirls around and around to signal to the world how predictable you are.

Let me set your expectations: if you’re anything like me, this is one of those sandbox games where you’ll spend countless hours designing a little stick on a box that slowly extends when you press the F key, only to glance at the Steam Workshop to find somebody else has designed a flyable F-15 fighter jet with a detailed cockpit view and fully functioning bomb bay doors. If you’re easily discouraged by the apparently boundless talents of everybody who isn’t you, then Main Assembly will sandblast away any lingering notions you might have had about a potential career in robotics. 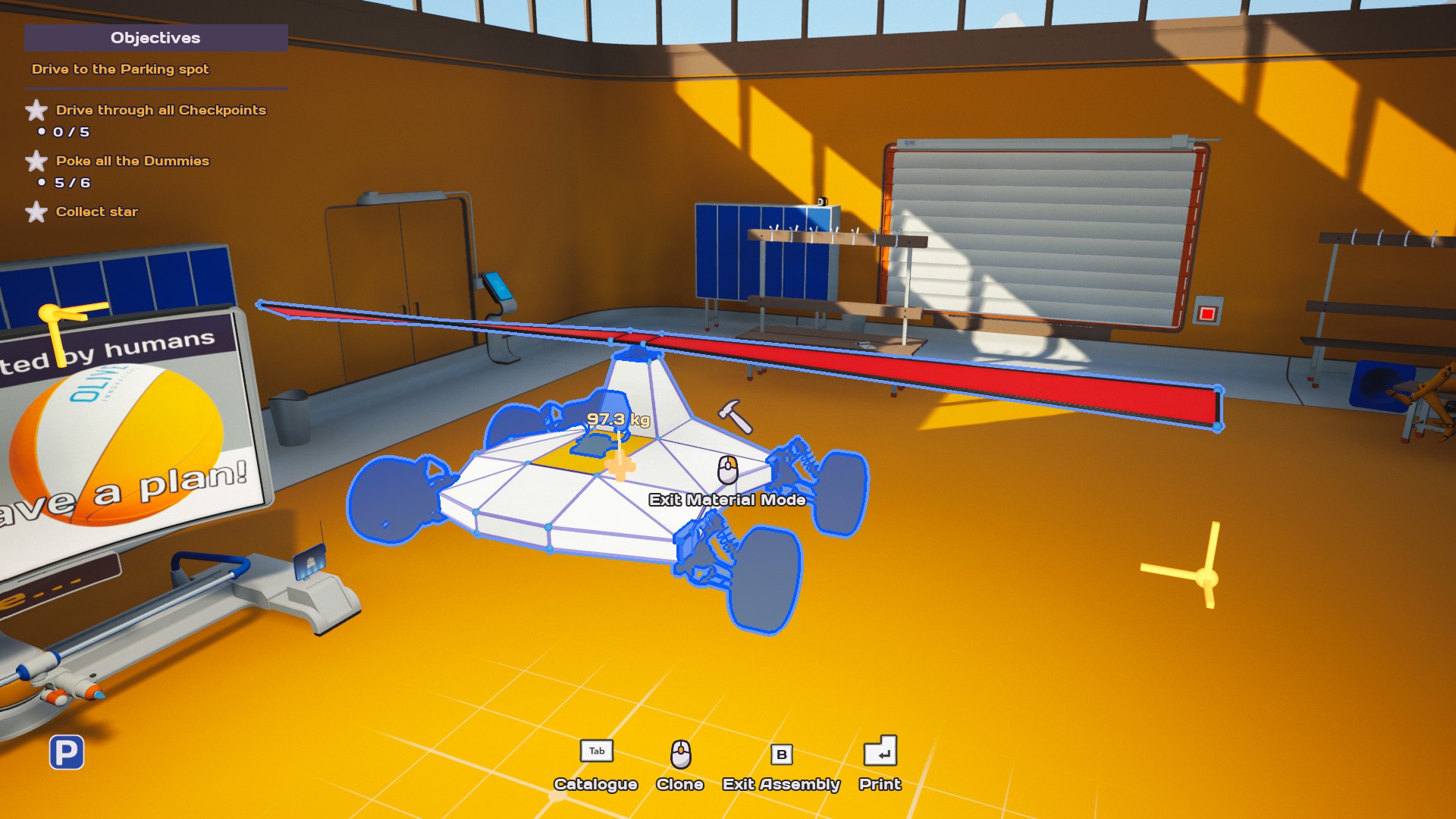 On the other hand, if you’ve got a healthy relationship with your own inadequacies – or worse still, actual competence – Main Assembly presents a deeply satisfying loop of seemingly unsolvable problems and your own hand-built solutions. For the mechanically inclined it’s an opportunity to flex whichever bit of your brain understands how torque works, a heaving toy box set inside a robust physical simulation, with a drag-and-drop programming interface so you can wire up your creations to do your bidding.

For the rest of us, this game is the manifestation of the idea that if something is stupid, but it works, then it’s not stupid. Need to lift a crate into a truck? Weld a pair of retractable prongs on the front of the go-kart you built for the previous challenge and give that a go. And if those prongs happen to catapult the crate into the harbour? Switch back into build mode, refine your machine, and try again. Fumbling your way to the simplest solution will still leave you with a cobbled together robot you’ll adore. 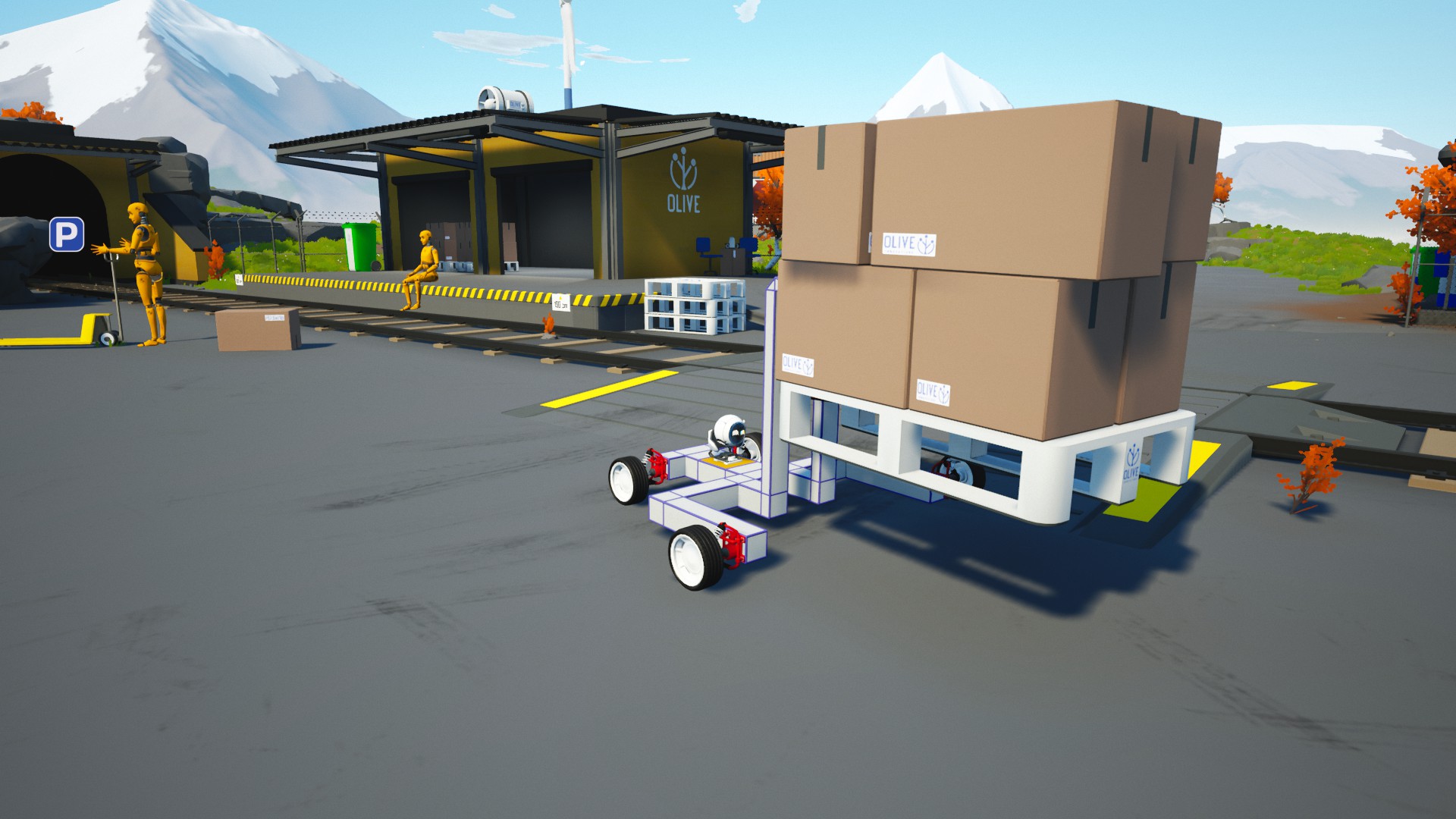 Crucially for novices and experts alike, the building interface does everything it can to stay out of your way. Constructing a robot is super intuitive, a matter of clicking and dragging on vertices, polygons and edges to gradually build out the robot’s chassis, before snapping motors, pistons, wheels and other components to its surface. By default, automatic symmetry prevents you from designing something that won’t drive in a straight line, and at any point you can tap the enter key to print your robot and take it for a spin. No loading or delays, just rapid iteration, frictionless tweaking and experimentation.

A simple and powerful visual programming interface lets you map the actions of individual robot parts to button presses and other inputs. In the most basic example, you can wire up the WASD keys to control acceleration and steering. At the more advanced end of things, you can attempt whatever the hell kind of electronics is making this player’s aeroplane fly. 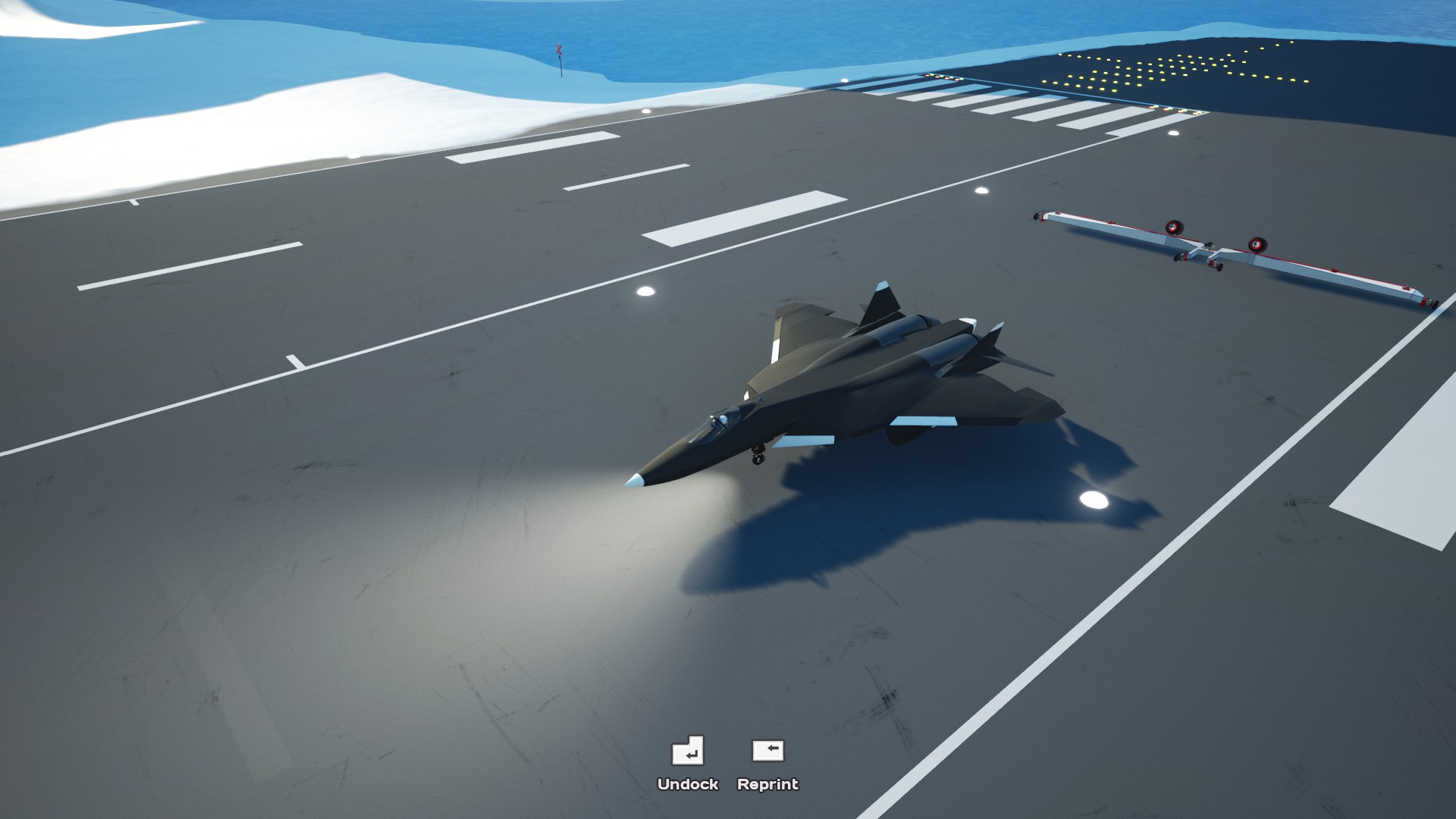 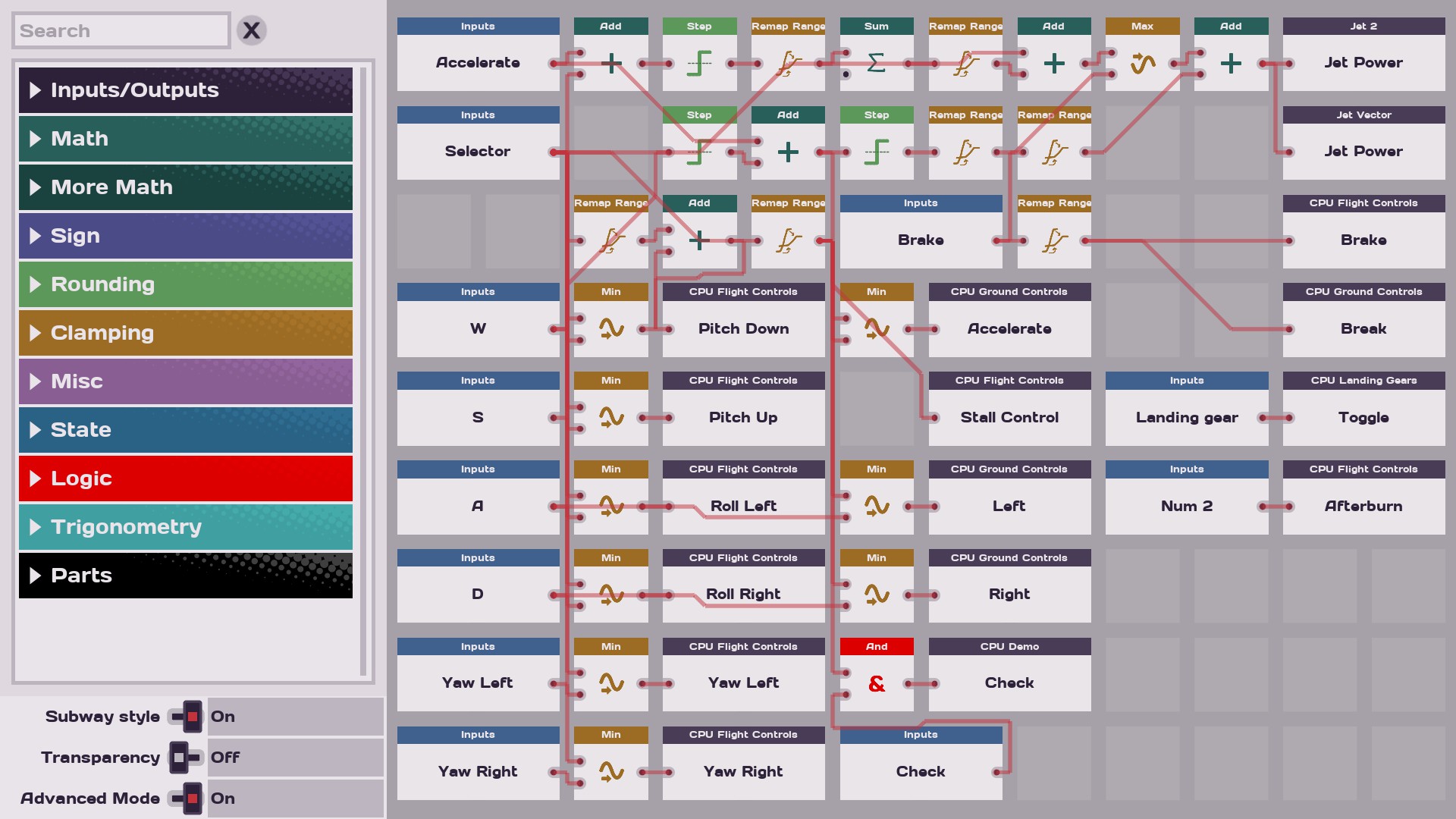 I’d like to be able to show off some of my own incredible designs in this piece, but my robots aren’t very good. They’re not terrible – they’re certainly not as bad as Matthew’s – but despite their shortcomings I love each and every last one of them as if they were my own metal children. Each one is saved to a growing library of designs, and each one has a name. I spent an entire evening designing Forkboy, a forklift that could pick up very heavy objects by extending an equally heavy counter-weight out the back to keep it from tipping over forwards. I later learned that this is also how real-world cranes avoid falling over. So that’s me, independently arriving at a solution that the person who invented cranes came up with. And I bet it took them ages. Main Assembly can make you feel incredibly clever.

The game is set around a series of star-collecting challenges. As well as a basic objective, there’s usually a couple of additional ones that test the limits of your creation. You might have designed a robot that can successfully pick up a mannequin from the floor, but can you make a robot that can pluck one from a high ledge, or from really far away? As you add features to your robot – taller winches, longer pistons, telescopic arms – new design problems and weight balancing issues all have to be considered. In this way building robots feels organic, and the ability to instantly test out your changes means you can take baby steps towards solutions. 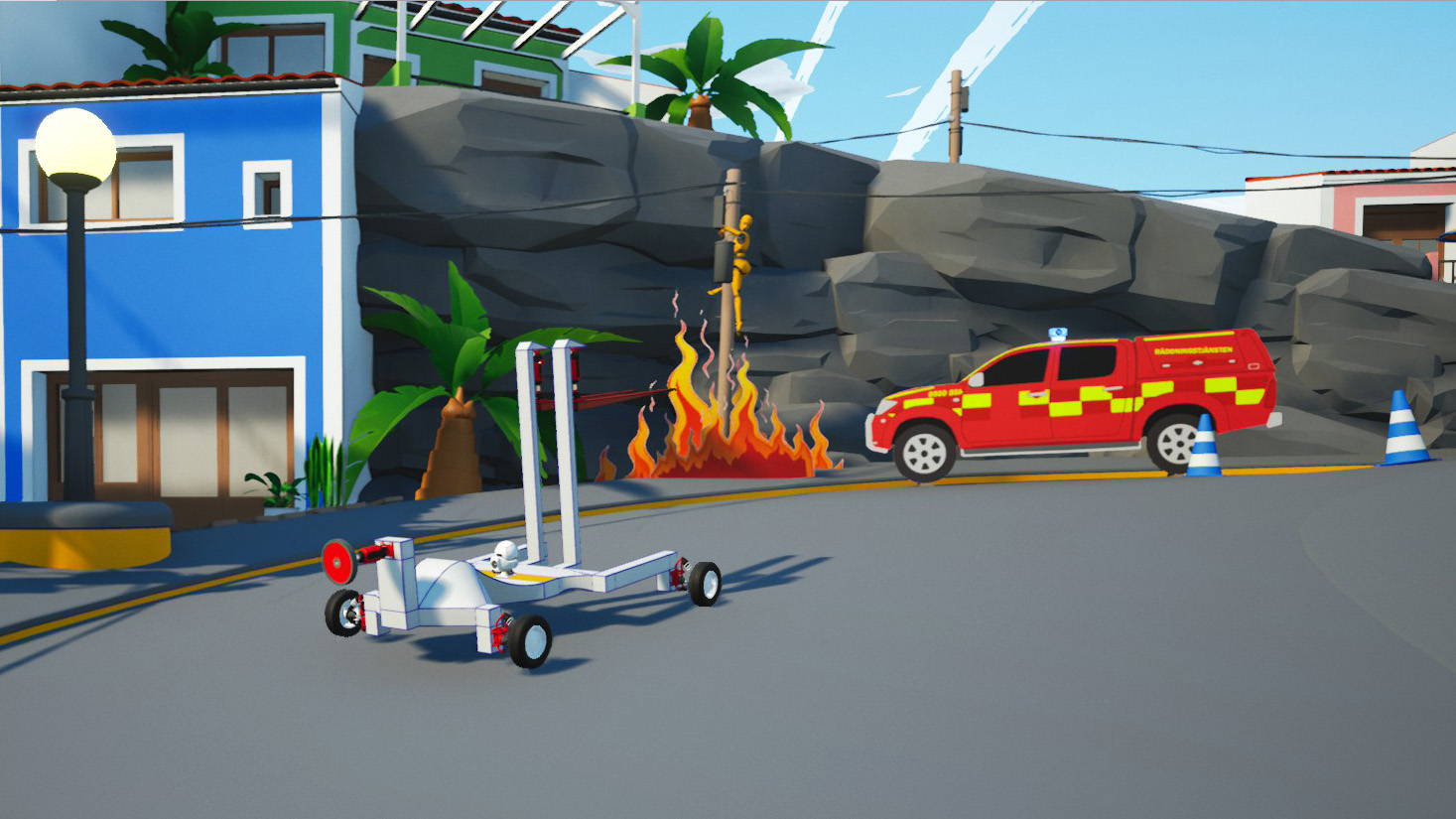 There are a few issues. The tutorial walks you through the basics, but cuts you loose just at the moment things start getting really complicated. If you're familiar with builder games and have a grasp of basic programming concepts, you'll be able to intuitively figure out some of the trickier aspects, but novices will be in over their heads as soon as the tutorial dumps them back at the main title screen. There's currently not a whole lot to actually do with robots you create either, besides drive them around in the challenge levels collecting stars.

And on a couple of occasions there seemed to be something irredeemably broken about my robot. Polygons of the chassis would extrude in unpredictable directions, surfaces would vanish so that the hollow insides of my robot were exposed to the world, and no amount of careful teasing of vectors could lift whatever curse had befallen it. The entire robot had to be euthanised and another built from scratch. 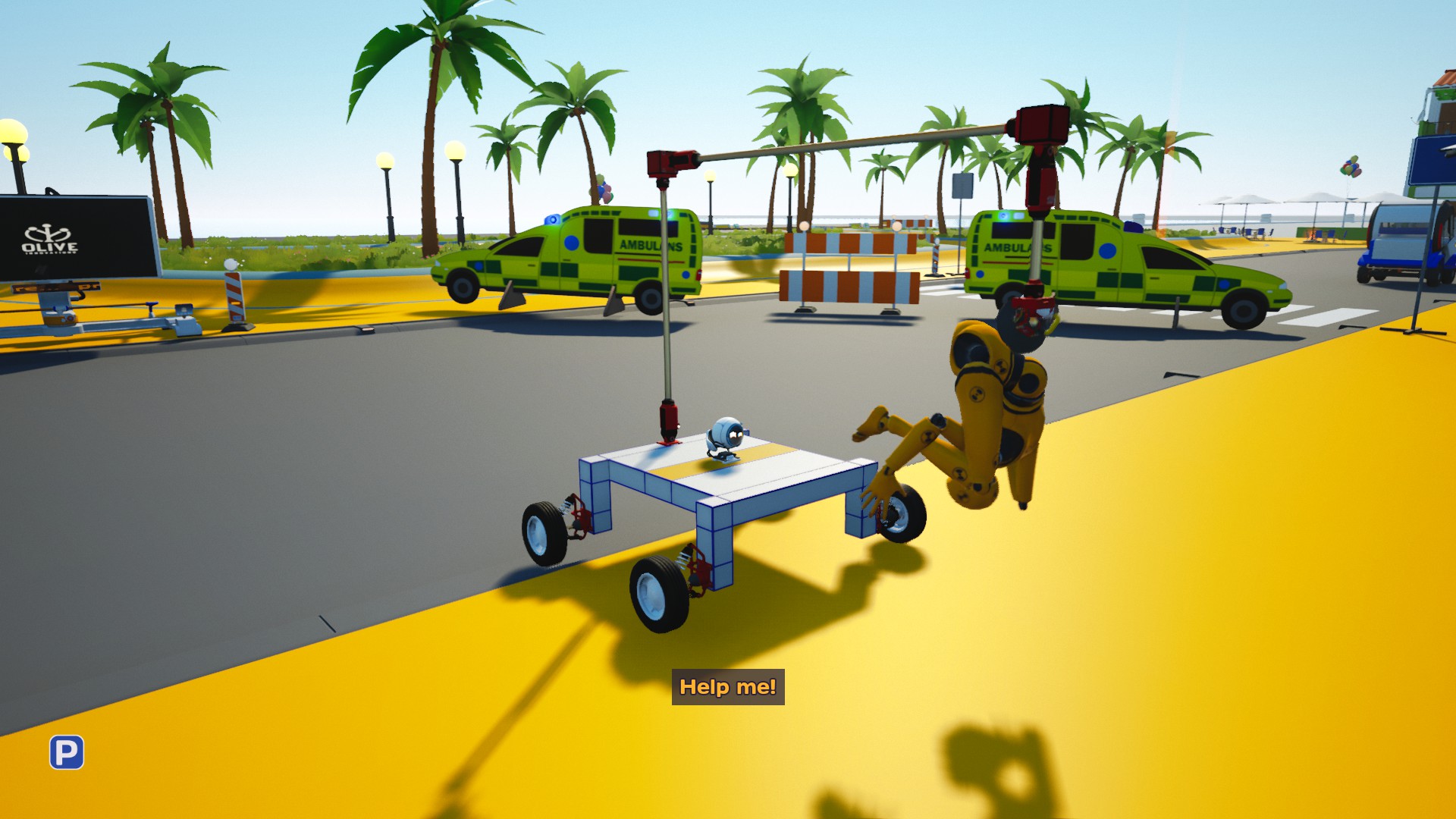 Such ghosts in the machine are thankfully rare, and this early access version feels otherwise highly polished. Main Assembly is great at understanding what it is you’re trying to do at any given moment. Drag the corner edge of a cube towards another part and it will weld them together, snapping on neat grid lines and tidying up any back facing polygons. Attach a pair of wheels and the game will automatically wire the steering up to your left analogue stick. And its physics engine is robust enough to cope with all manner of experimental oddness: high-speed collisions between moving parts, and whirring doodads jamming themselves into places they shouldn't be.

There is an implicit contract between builder games and their players, a promise that if something doesn't work properly it shouldn't be the fault of a physics engine that can't cope, but the robot design itself. Main Assembly lives up to this promise better than any other physics toybox I've used. It is a frictionlessly inventive playground, a lubricated luge track leading from your creative brain to the screen, so that your greasy ideas can slip effortlessly into reality, regardless of how puerile they may be.