Earlier this week, after remembering that I'd populated the RPS Mince Raft server with thirty-odd mates from Twitter and then forgotten about it for four months, I put together an impromptu archaeological expedition, and went in to find out what the hell happened in there after it went dark. In Monday's post, we poked around the chaotic ruins of the server's derelict spawn town, where we found a bouncy castle, a giant "mincemas" gift (full of mince), and an underground den we could only deem "the bone room" before leaving in a hurry.

But that was just the start of the journey - and the deeper we went into this place, the weirder it got. Below is a selection of photographs from the second part of my account of the expedition, annotated with my field notes. But before we set out, a warning: last time, I promised that you were gonna see a train's arse in this post - and if you thought I was kidding, you're in for a bleak surprise. OK, ready? Let's go.

Thought I'd start us off with a bit of a philosophical question today: 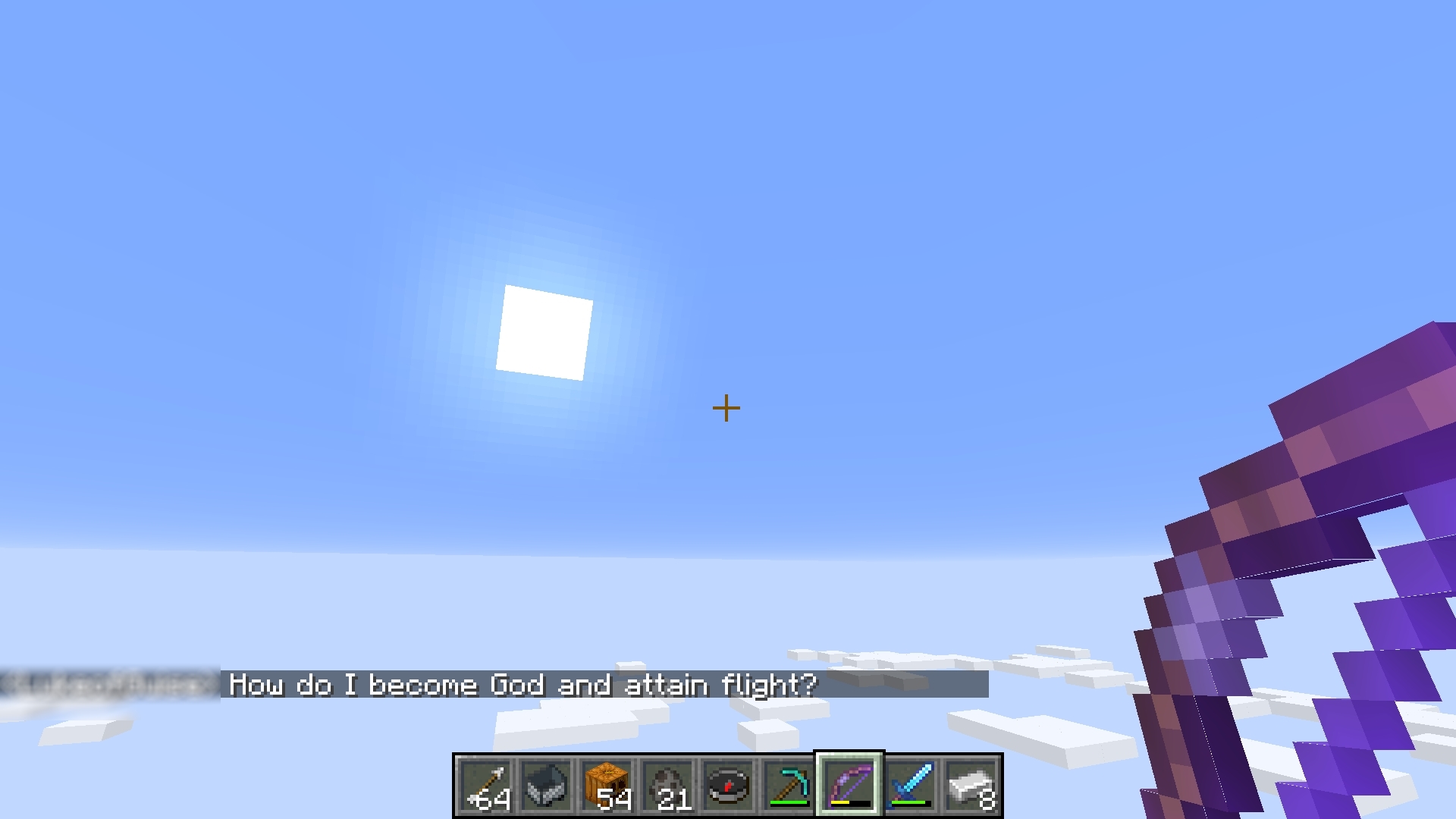 It was hard to determine exactly where the borders of the spawn settlement were, as it seemed there had been at least two attempts to build city walls, both of which had long been built over. At one point while investigating, we found a vast pub, seemingly modelled on Deadwood's Gem Saloon (going by the signs behind the bar), that had become entirely subterranean after being covered with other buildings and an artificial hill. 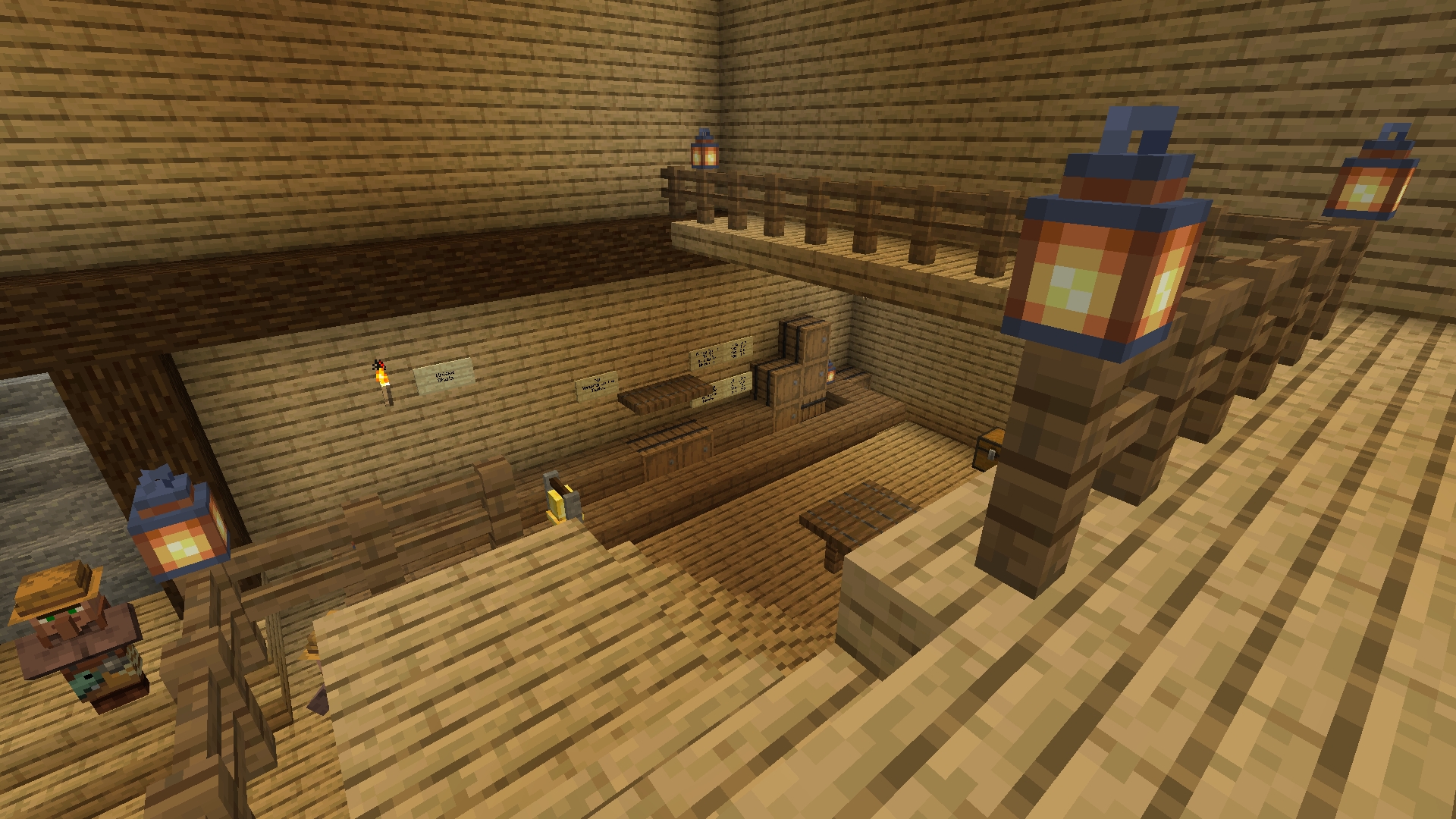 I was informed by one of my companions that this place had once served as a prison for one of the strange relic mobs known as giants, but that it had died in "the accident", which it was becoming increasingly clear had wiped out every mob within a few hundred blocks of spawn, at some point before it had been abandoned. The place took on an air of cosmic sadness after that, so we made our way above ground and headed away from town as night fell. On our way out, we couldn't resist investigating this cathedral, perched high on a crag overlooking the city: 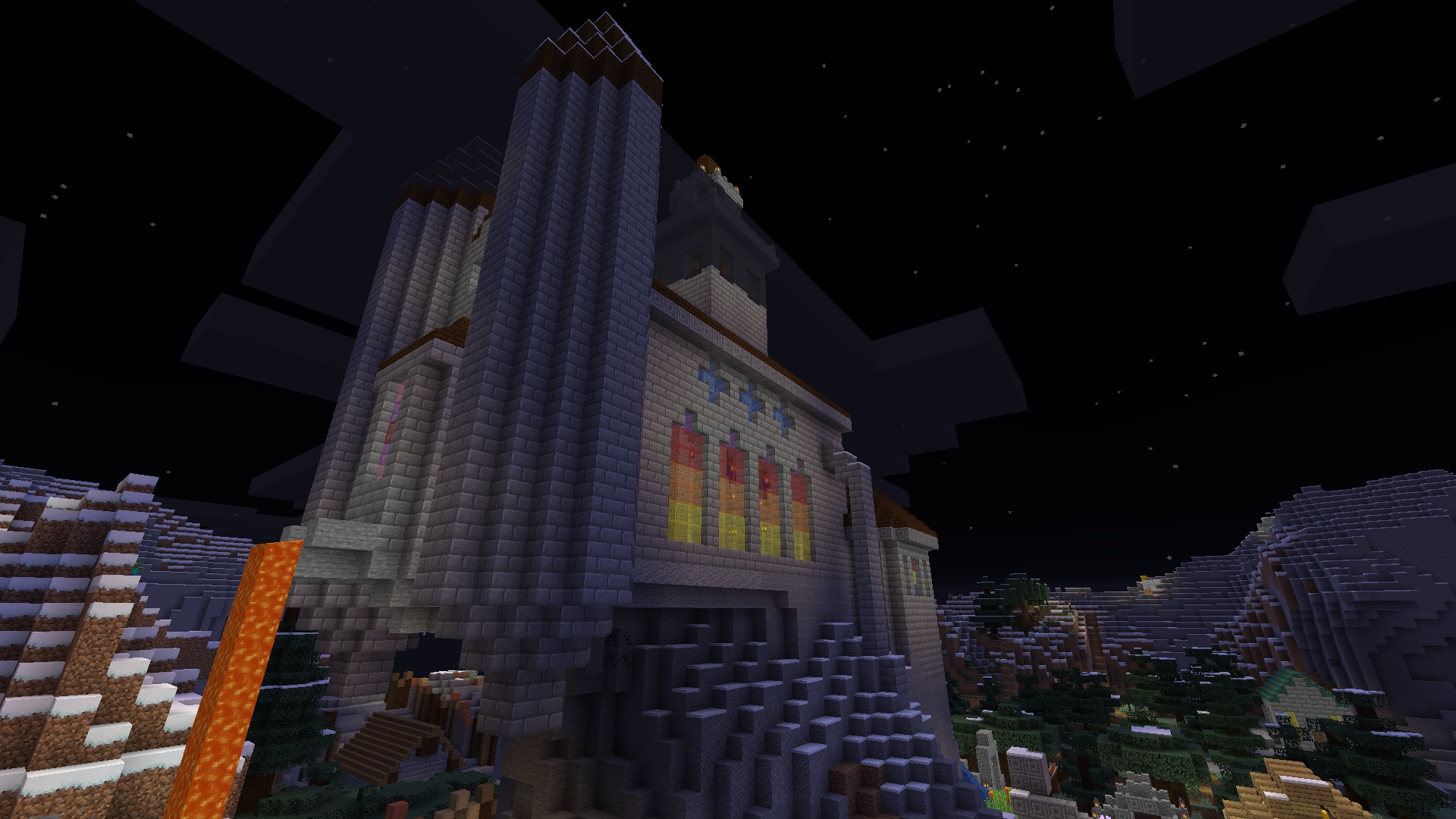 This place of worship was explained only by these signs above its doors: 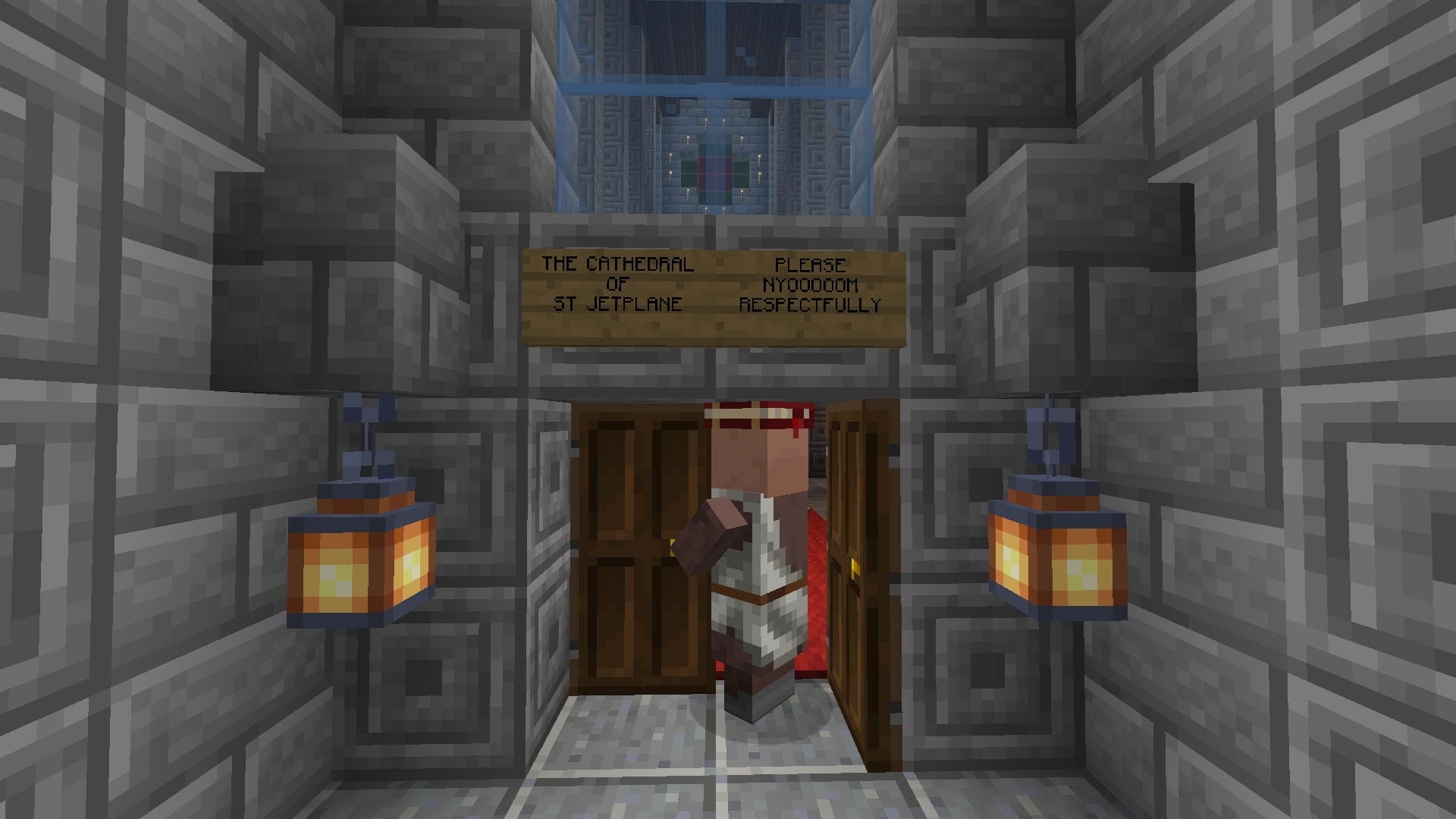 Beyond these eight words, nothing of the religion of St. Jetplane had survived, save for an iron golem bearing a tag that named him "Brother Duty-Free", wandering forlornly on a nearby hillside. This odd monk had nothing to say to us, however, so we paid our respects to the cathedral as best we could according to our interpretation of the sign: by flying around above its nave, solemnly making aeroplane noises. 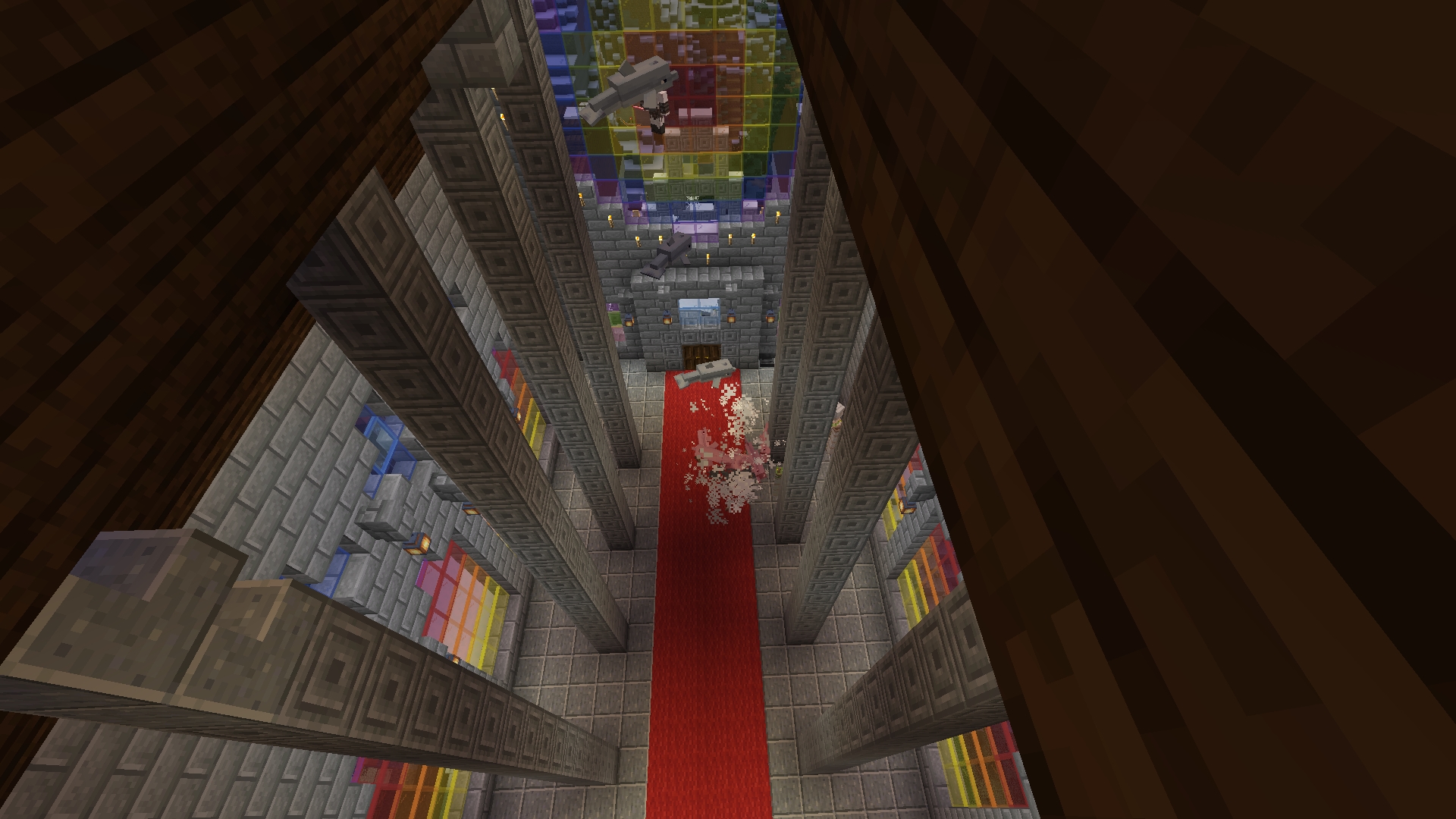 When Nat began to bark up a load of dolphins, however, I feared we might have been stretching the definition of "respectful", and I moved us on. We headed east as night progressed, and a little way beyond town, we ran into a corral of shuffling cows, next to rows upon rows of simple, rustic graves. 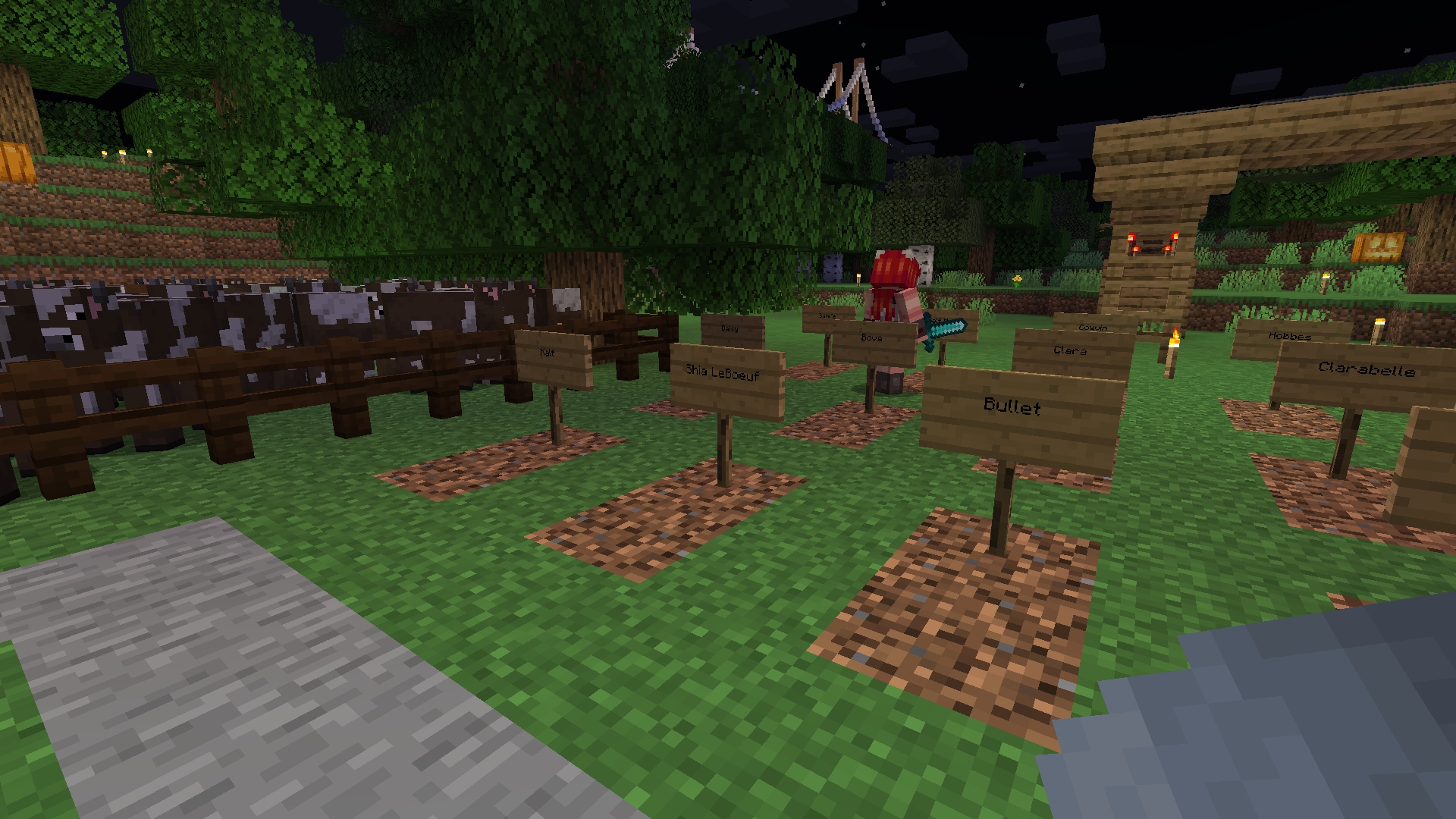 As the herd looked mournfully on, we realised the names on the headstones were classic cow names - things like "Daisy", "Clara" and "Shia LaBeouf", and hurried on without looking back. Before long we found a railway to follow, and as dawn came, it led us to a valley containing a mess of rails and wooden sidings. We were perplexed, until our scout took to the air and saw its true nature: it was a go-kart track. 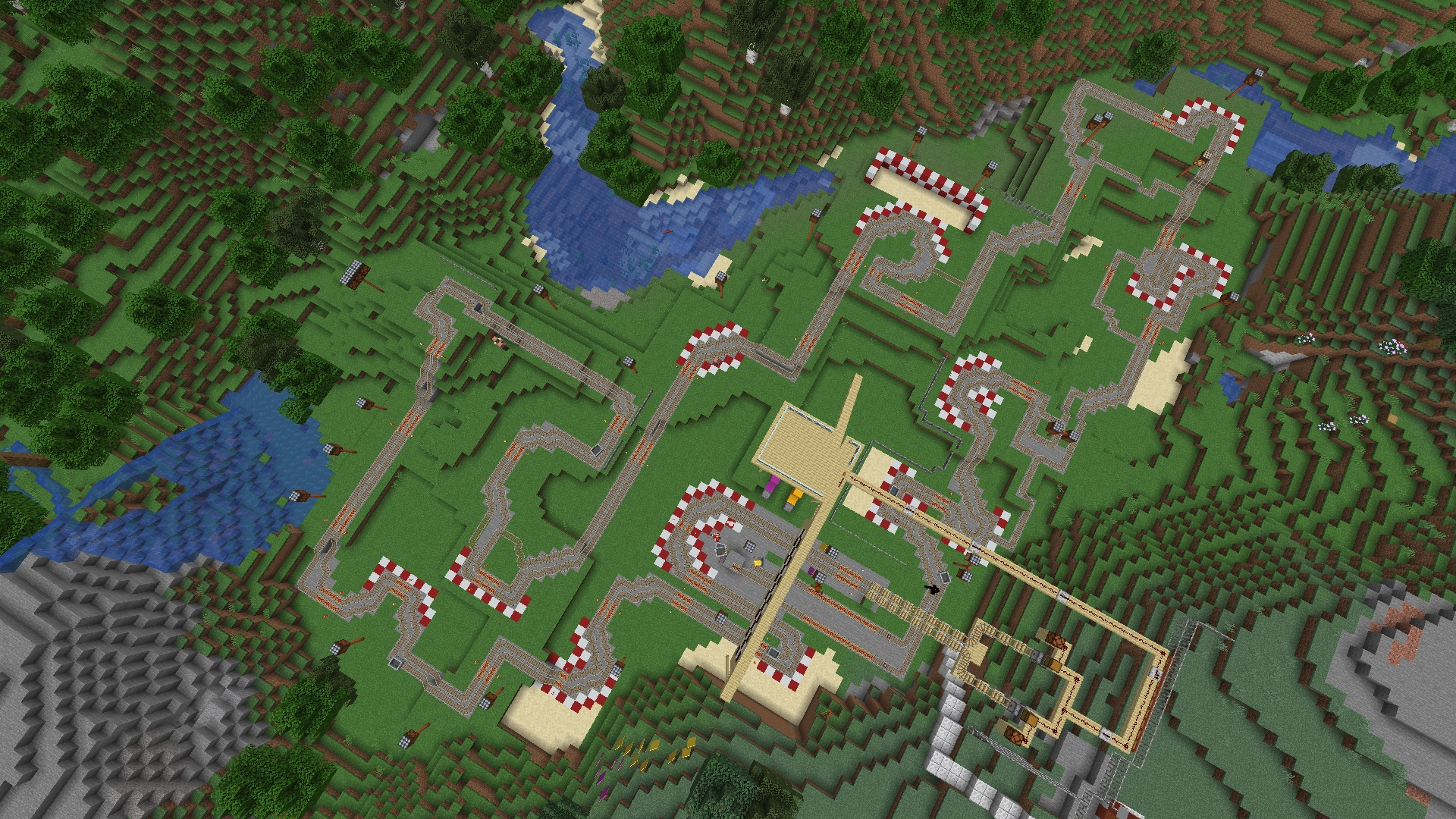 Needing to bolster our spirits after the bovine cemetery, we had a pleasant race for a time. (In this next image, you can see my expedition mate Ollie in the foreground. I thought his skin was meant to be Kratos off of God Of War this whole time, but apparently he just went to a Minecraft skins database and typed "brute" into the search box, and this came back). 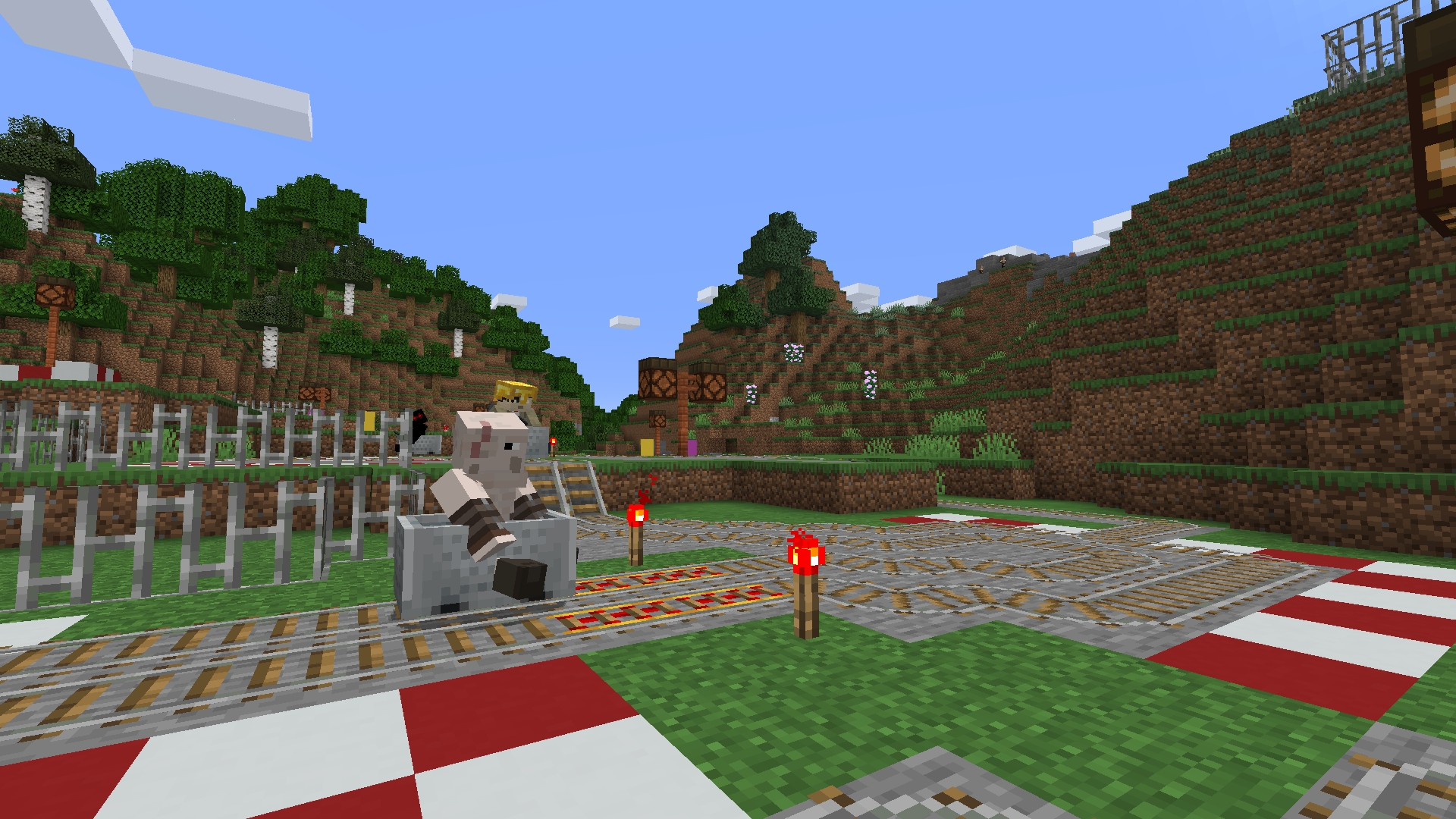 As we raced and raced and raced, I developed the uncanny feeling we were drifting into a session of Garfield Kart Furious Racing, so we dragged ourselves from the karts and continued on the eastern railway. After a while, this figure became visible, smouldering on a clifftop to our left, and we eyed it nervously as we passed. 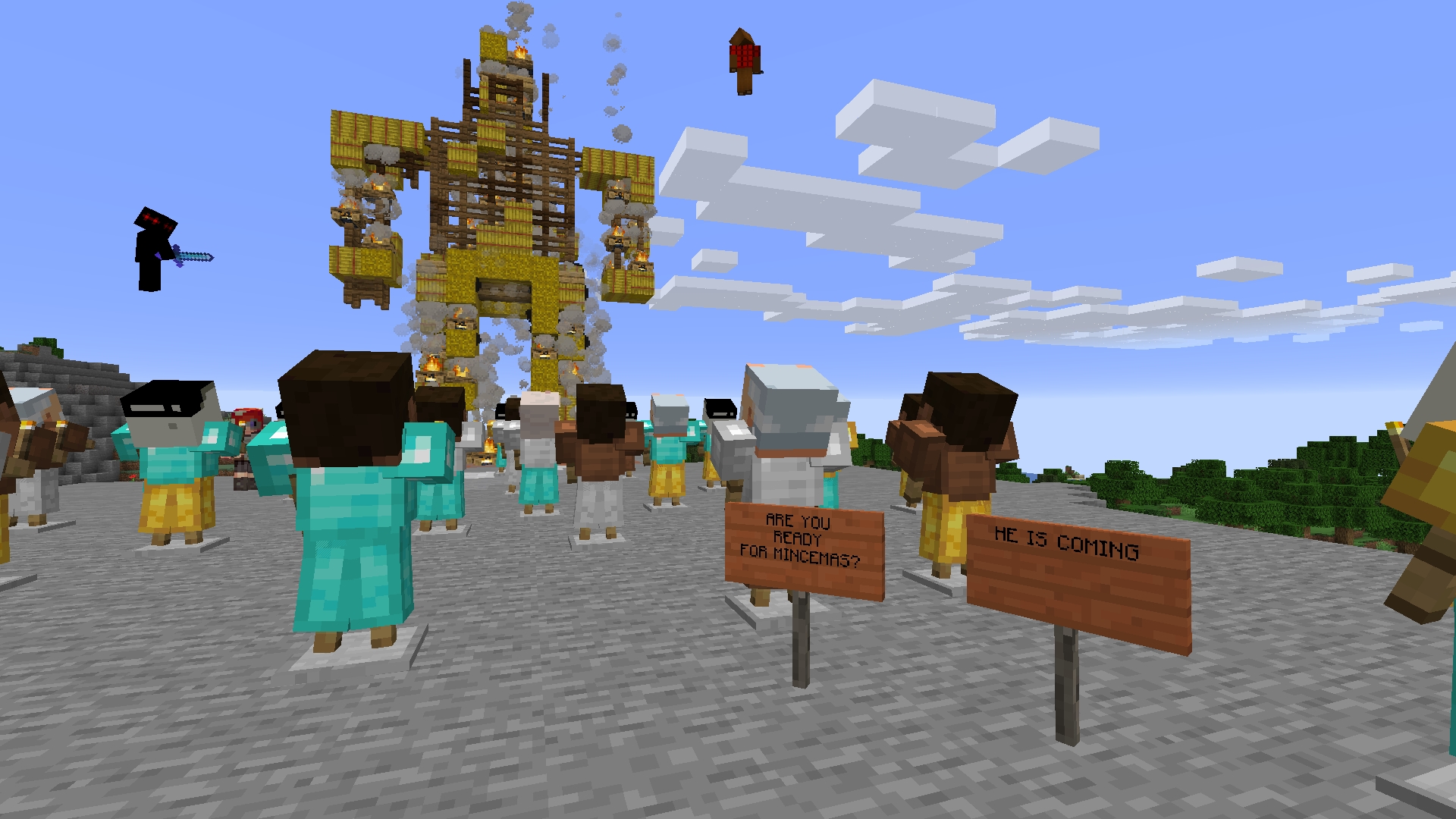 Once again, the signs placed before this idol warned of "Mincemas", suggesting that whatever this event had been, had not been confined only to the spawn city. In the image there, you can see two of my expedition mates examining the crowd of static, lifeless worshippers before the idol - they abandoned their investigation in a great hurry, when they (genuinely) found facsimiles of their own faces among the frozen congregation.

Continuing on through the hills, we also found a structure we could only name "French Stonehenge": 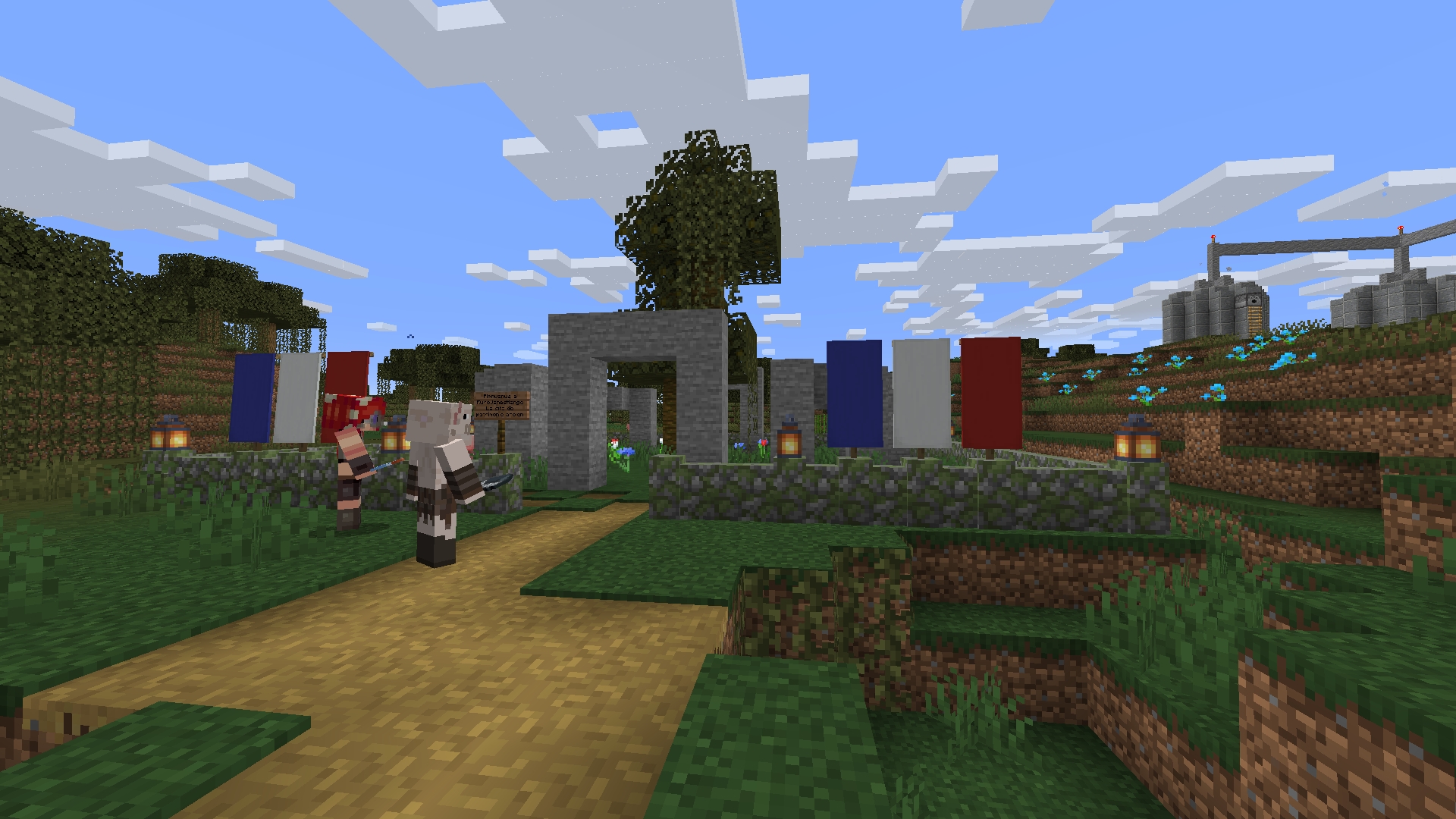 It was, you see, a reconstruction of Stonehenge... but with French flags. Elegant, if enigmatic.

After a little more travel, the rugged hill country flattened out onto a broad, grassy plain. On it was built... a suburb. Dozens of immaculate show homes, with a swimming pool and barbecues, but with no sign that anyone had ever lived in any of them. 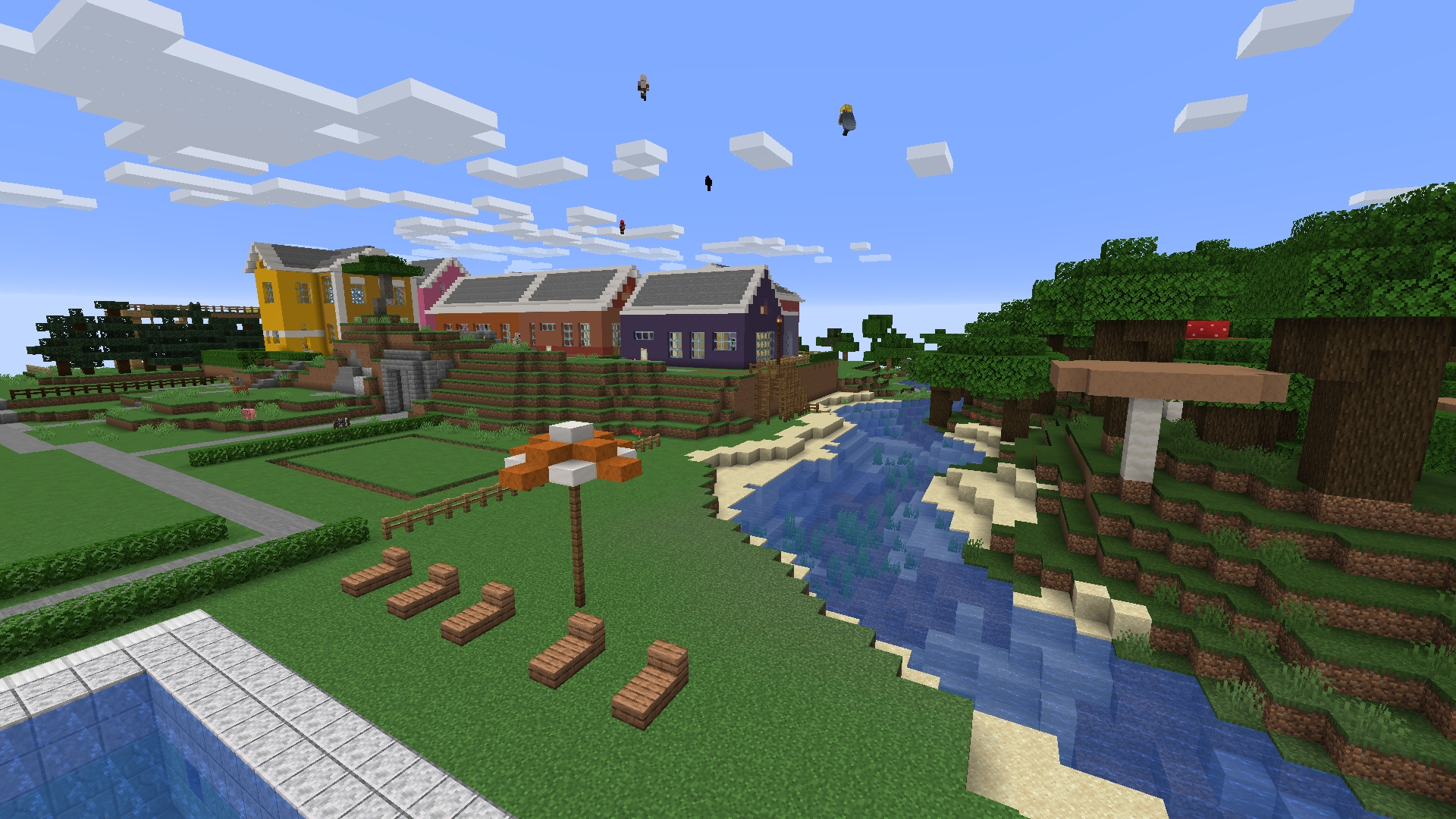 This is the next image in my camera roll, and I do not recall how the picture was taken. It concerns me. 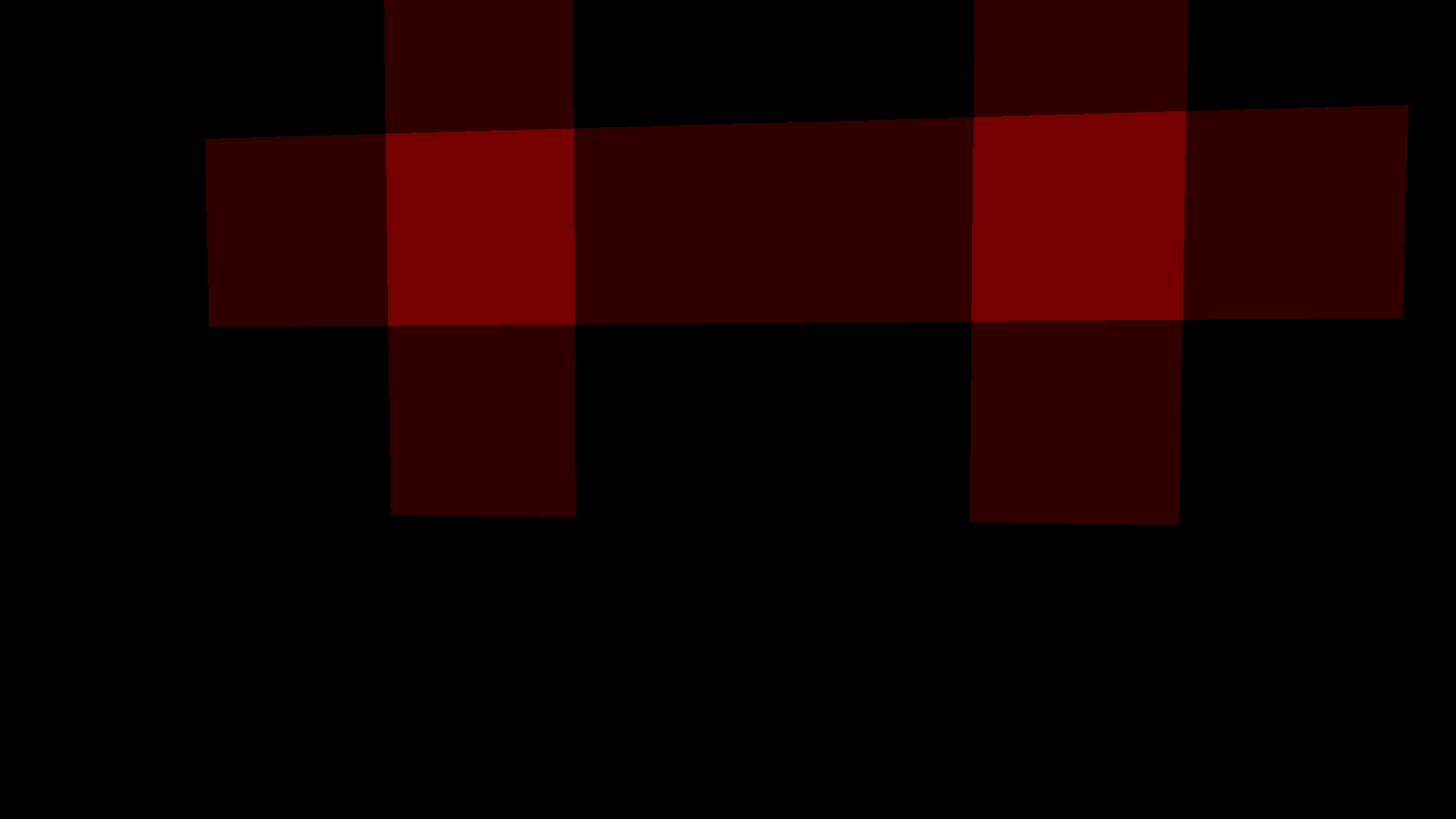 After passing the suburbs, we couldn't help but wonder where the "urbs" were - until the edge of a wheat field led us, first to a belt of farmland, and then to a genuinely immense city, whose outskirts are pictured below. On one of the skyscrapers (just visible on the left), glowstone blocks flickered on and off to spell the word "BIZNIZ", while another immense warehouse merely proclaimed the word "BEEF". 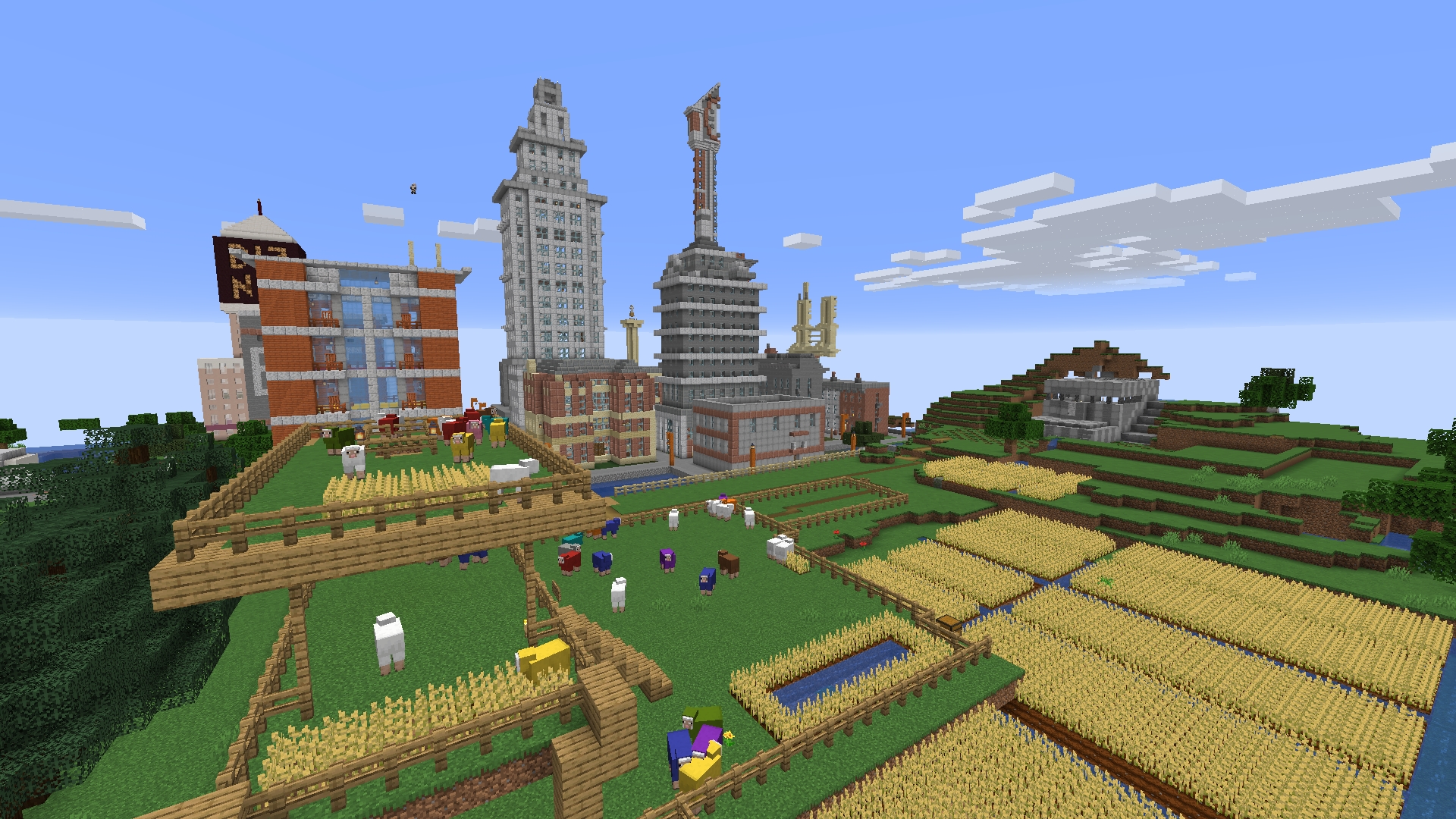 We moved into the city, and found its inhabitants: hundreds of muttering, identical villagers, wearing turtle shells on their heads: 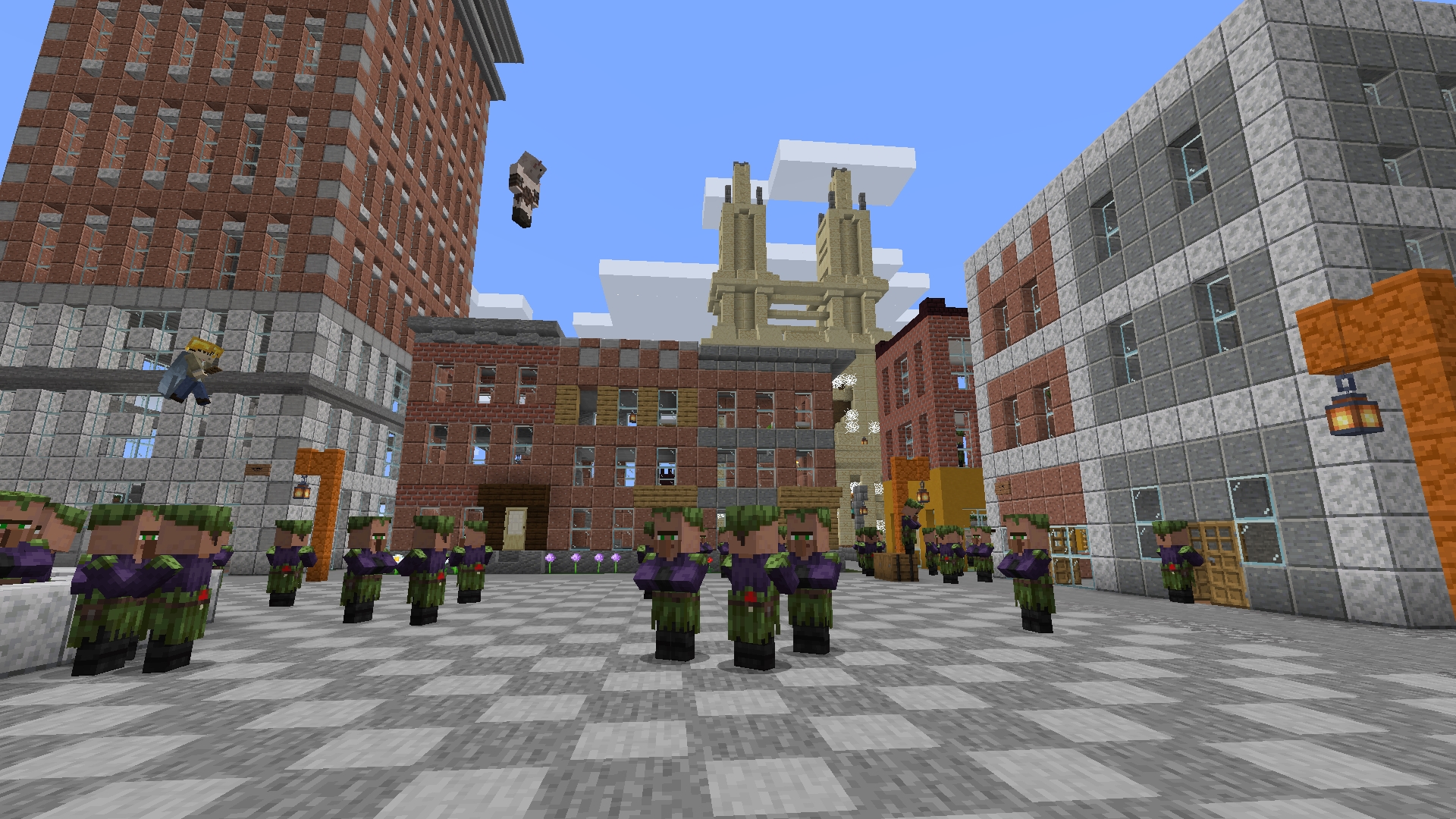 Before leaving town, we found a strange building adjoining a large glowstone skull, with a sign reading "entrance this way". To our delight, it turned out to contain... a functioning ghost train ride! 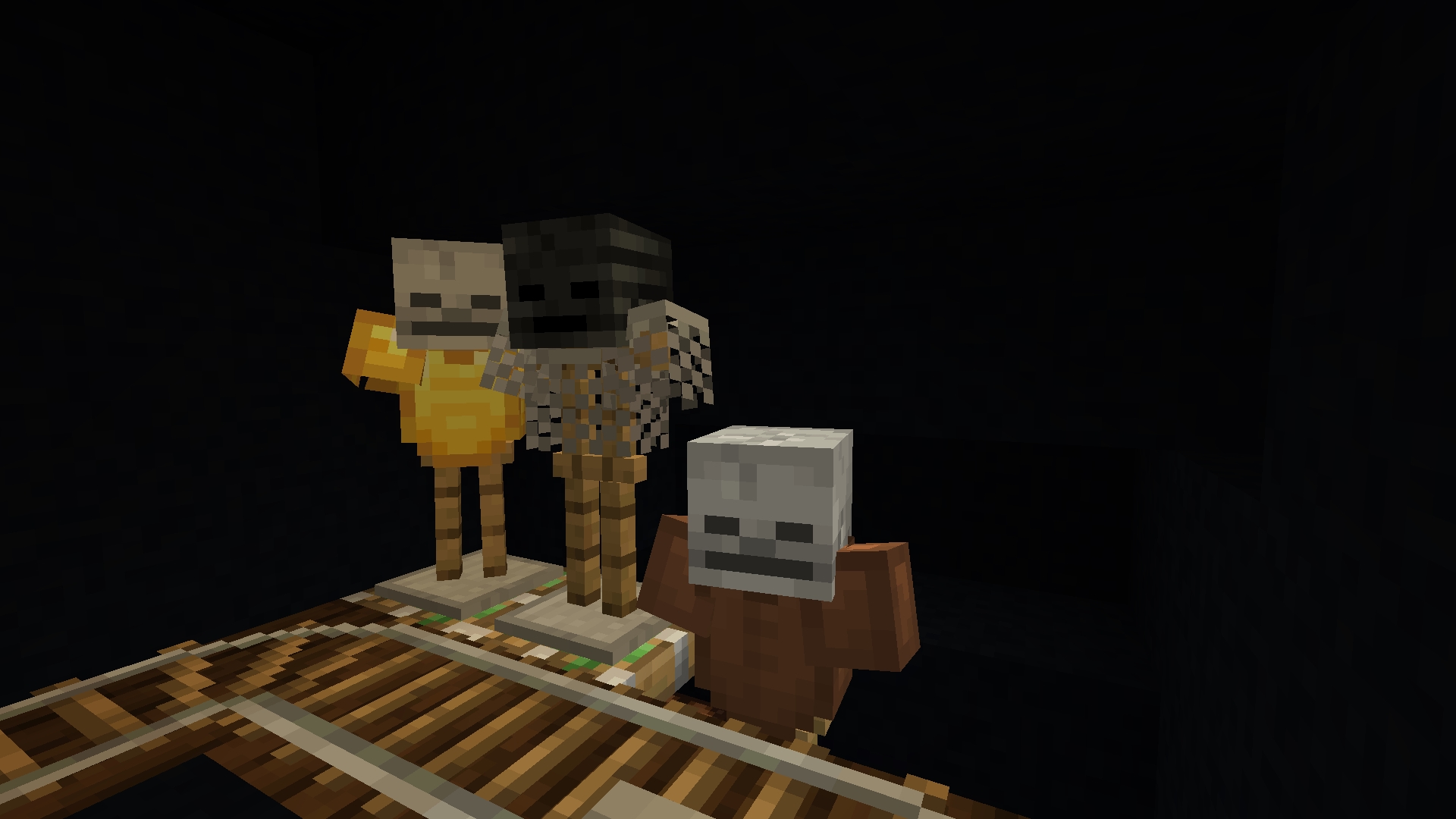 Honestly, it was brilliant. Lights went on and off, spooky music played, and all sorts of frightening figures (including Shronk, pictured in the back left) lurched out on pistons to frighten us. 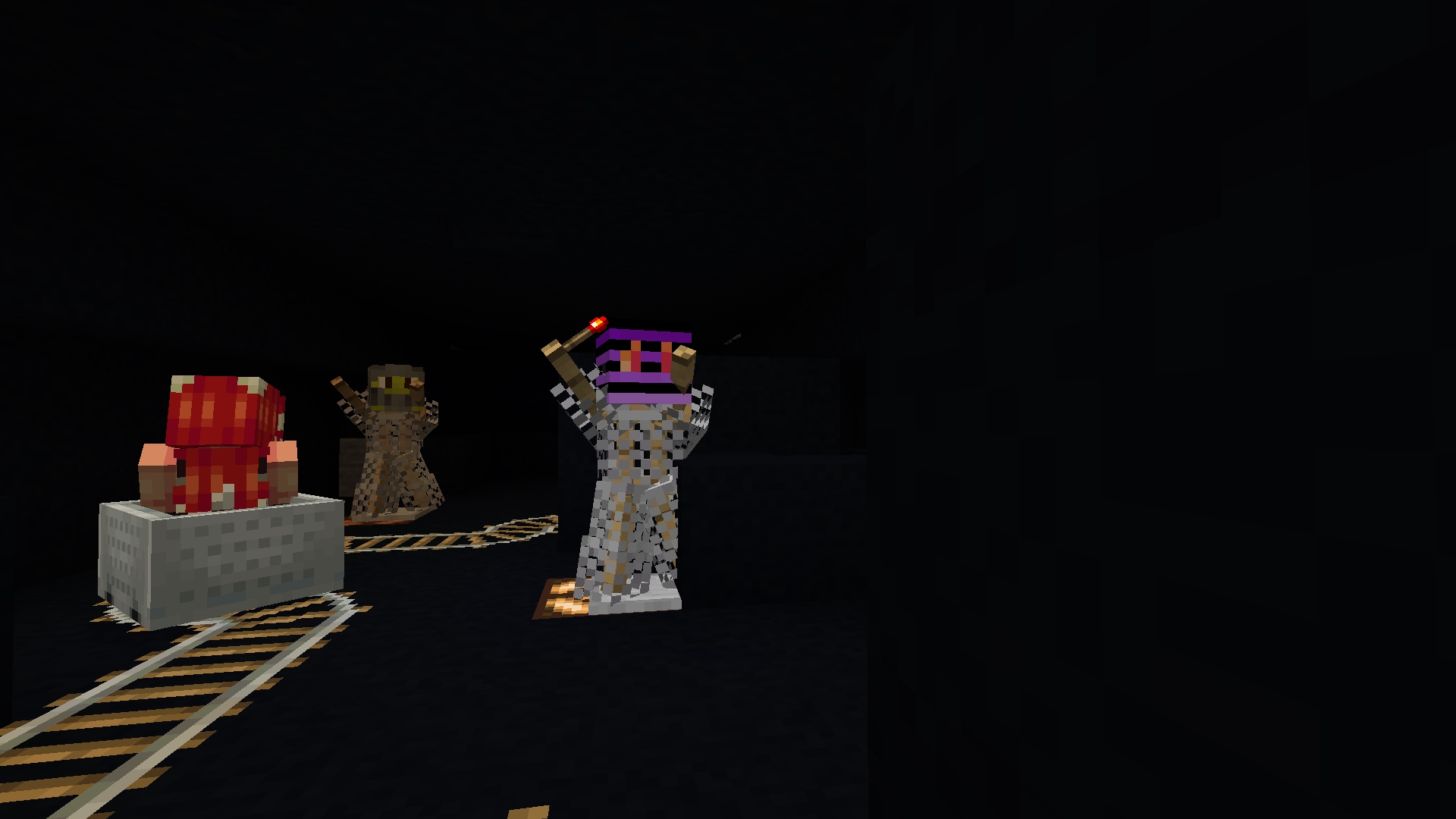 But the most frightening train of all was yet to come. Leading out from the strange metropolis was a much more intact railway than the one which had run through the hills, and so we took to Minecarts to continue east, with my vehicle in the lead. As the sun wet, a heavy rain began to fall, and after a while I noticed a dark shape looming on the track ahead. It seemed to be some sort of... train. But with the face of a man. A face contorted into a perfectly expressed grimace of shame, fear, and... desire? 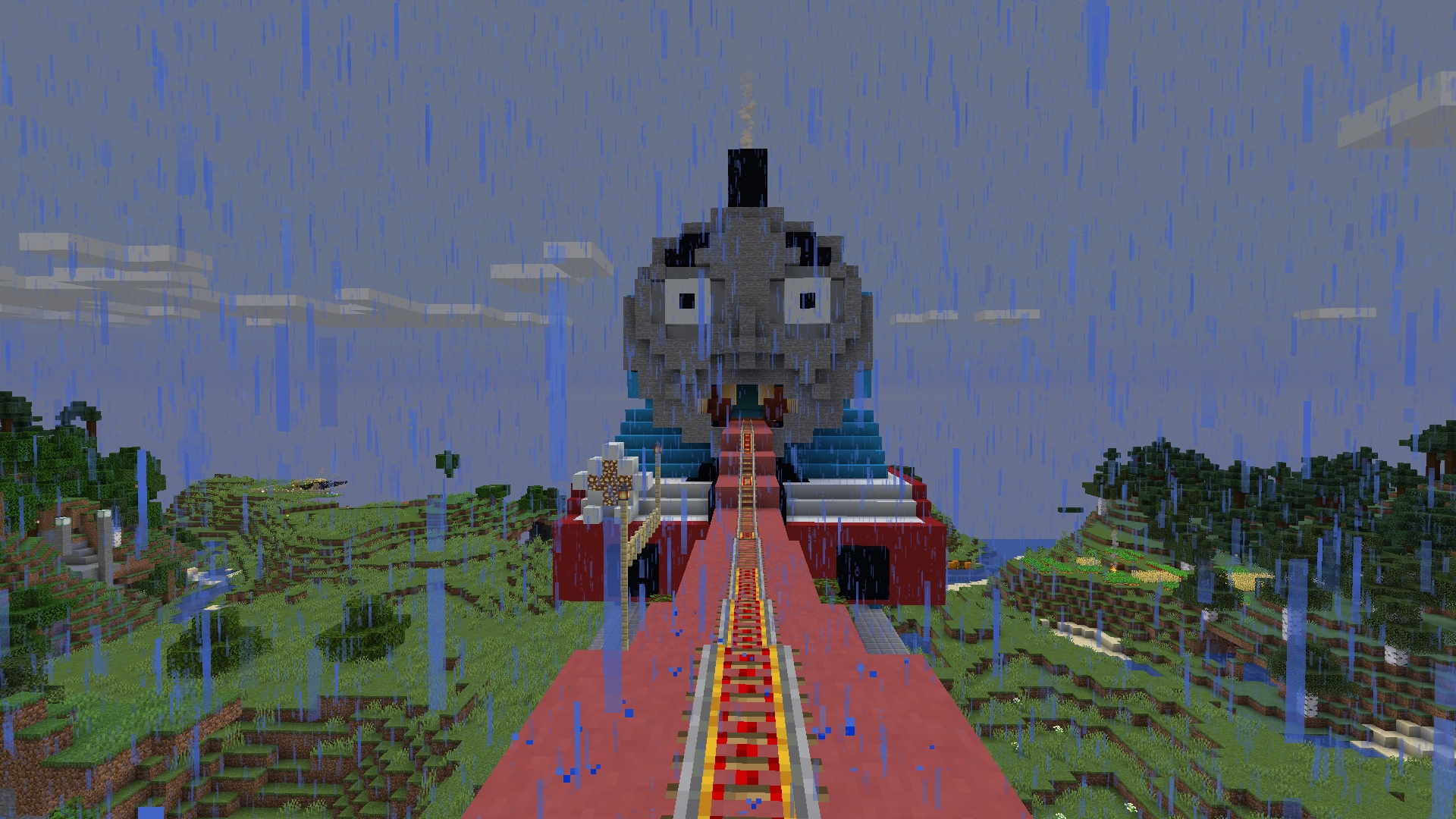 It was too late to turn back now, so we continued into the train's maw. Inside, we found it had uvula and - to my immense distress - a pelvis. 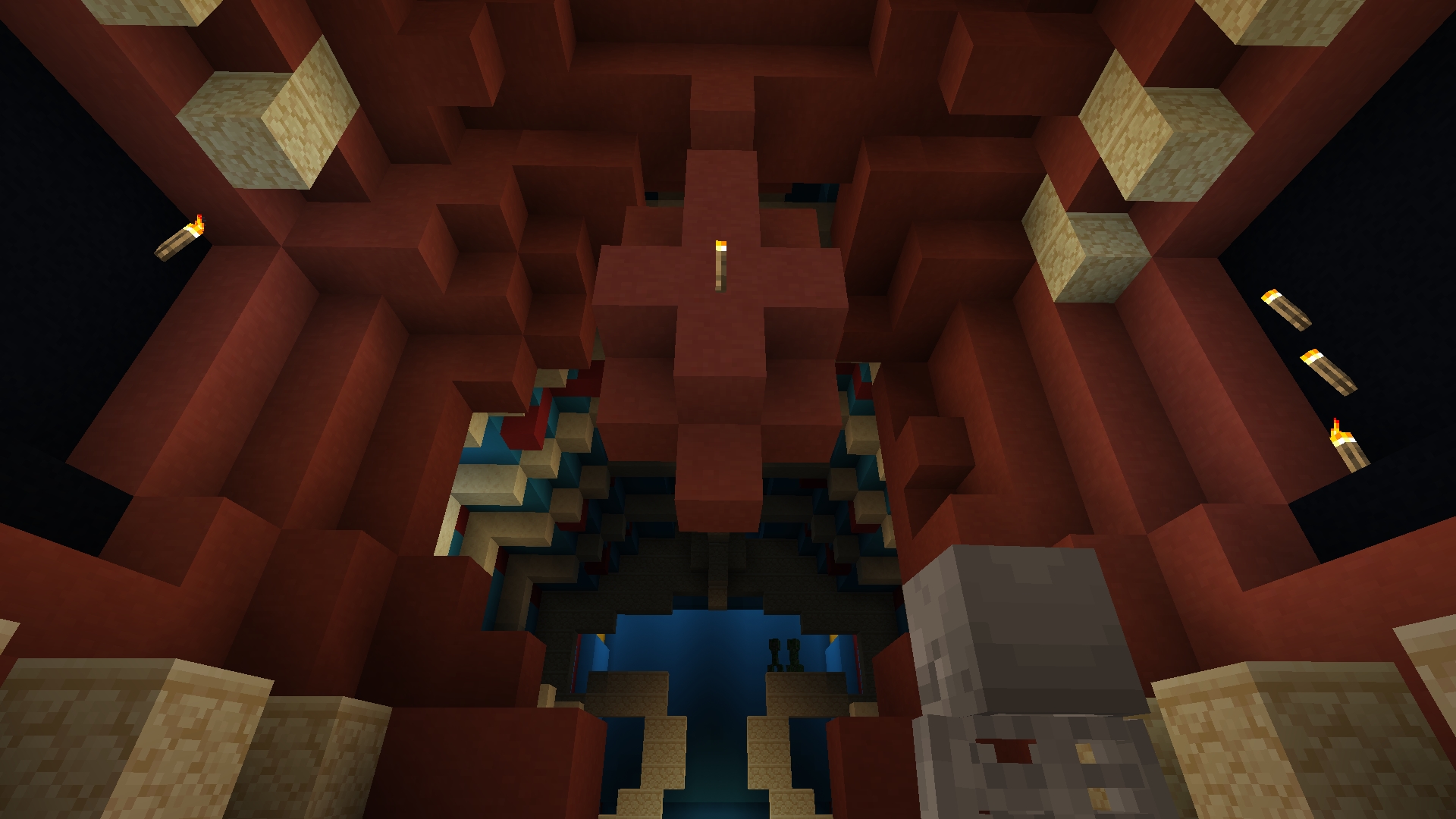 I hated that train with my life. But there was only one way out of it - through the bum. And so, as my minecart shot out of it like a bad jalfrezi, I could only glower balefully back at what, I would now forever be burdened with knowing, was Thomas the Tank Engine's arse: 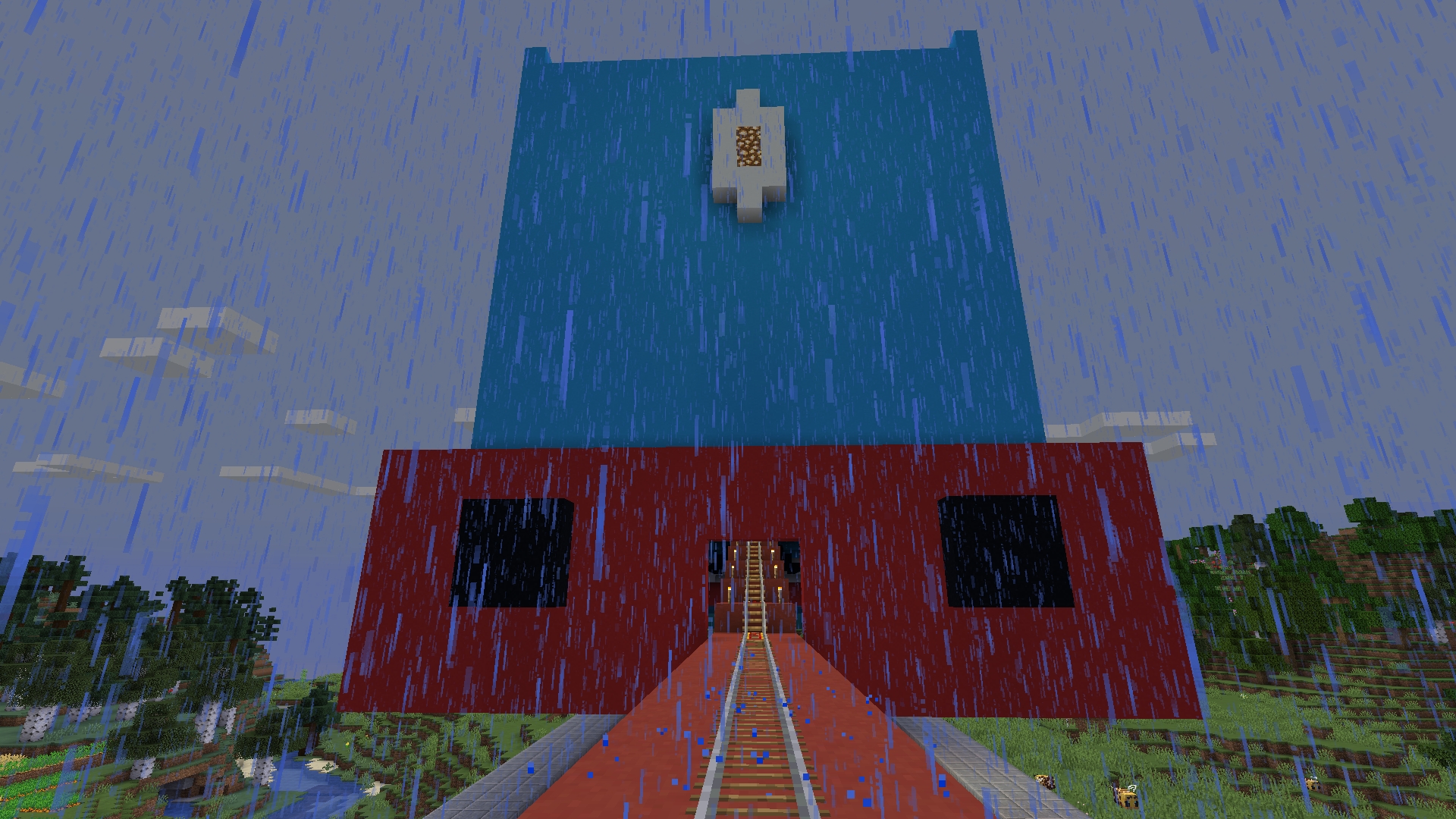