It all started so reasonably. Last July, I fancied having a bit more Minecraft in my life again, so I started a little Realms server for the RPS treehouse. Sin made a hovel. Astrid built a caravan. I bought a couple of friends in and we made a little town in a canyon. It was pleasant. But time moves on, and places change. By the time summer had rolled round into autumn, the original settlers of the server were all but vanished - Sin, indeed, had been Hounded Out.

But the place was anything but abandoned. I'd invited a fair crowd of Twitter mutuals onto the server to keep the lights on, and they... well. They got busy. By the last time I played, on Halloween, I was referred to only as "the Pharoah", and a metropolis had been built on the foundations of our starting settlement, by some sort of Shrek-themed cargo cult. After that, my time was eaten up by other games and other things, and I didn't go back on the server again. Until this morning, that is, when I was seized by nostalgia, and grabbed a few of the old regulars from the server discord to take a turn around the old place. After four months away, I figured we'd find little more than a Shrek-themed ghost town, and a few abandoned megaprojects. But I was wrong. In my absence, things had only gotten weirder. Here are some photos from this strange, melancholy expedition: 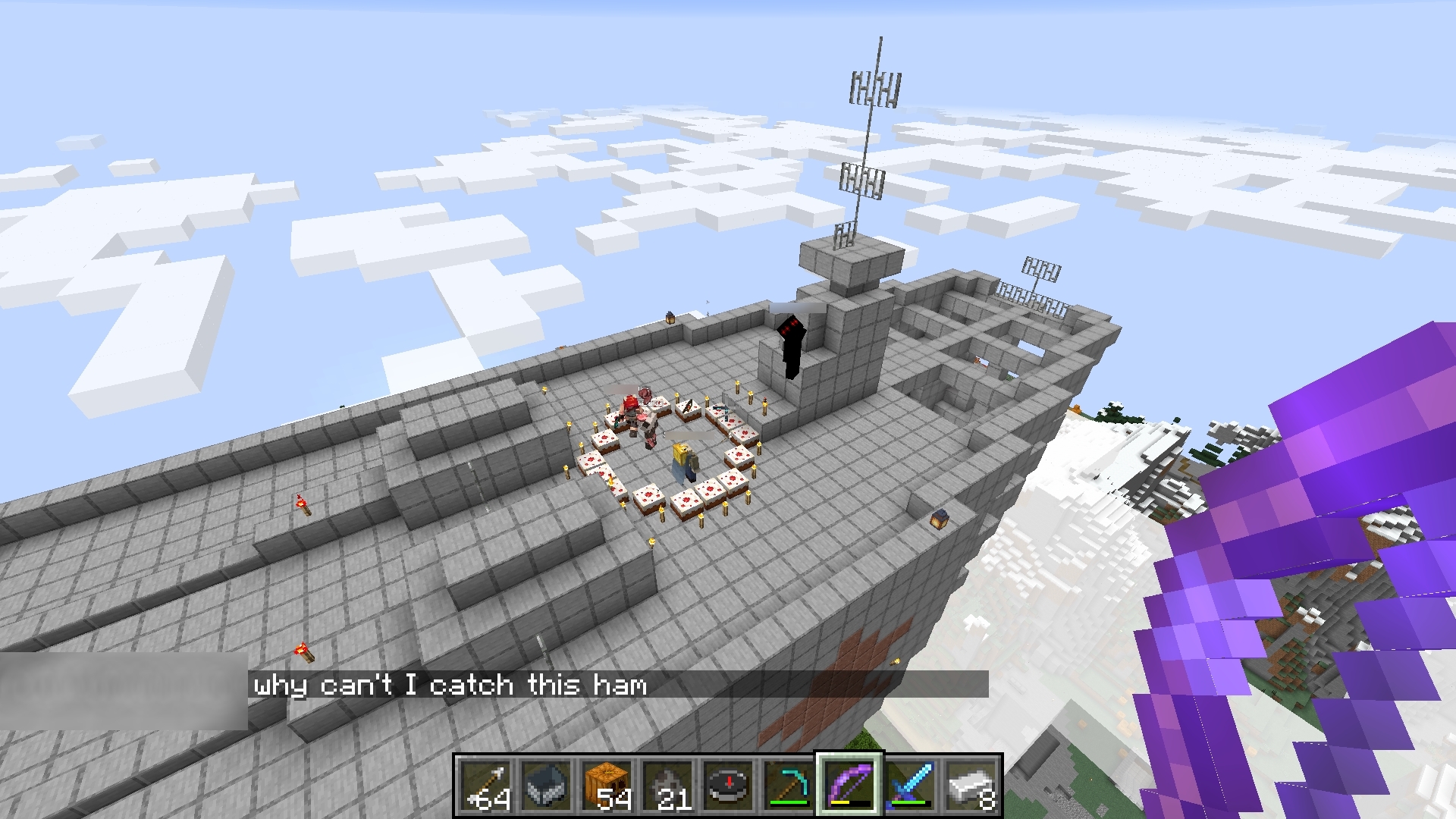 We start on familiar enough ground - the deck of the massive airship constructed long ago over the capital by RPS contributor Nat. I arrive late, and my expedition-mates have been killing time by juggling ham in an arena made of cakes. It's a good sport to get into. 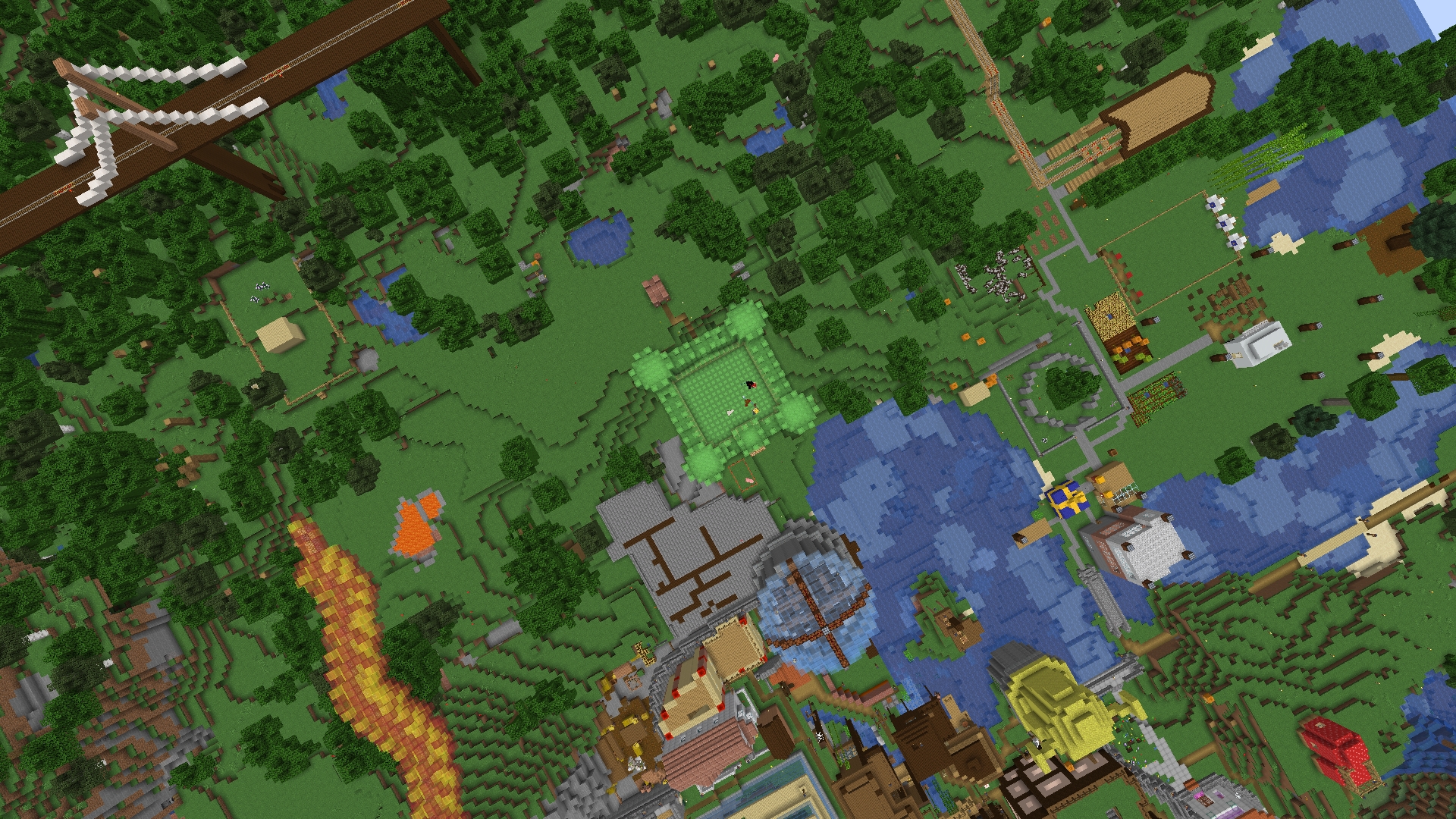 Once we're assembled, I lead us in a grand jump off the ship's edge, aiming for the huge green structure on the town's outskirts - a bouncy castle, on which we boing happily for a while, before heading out into the multicoloured nightmare of the place that was once our home. 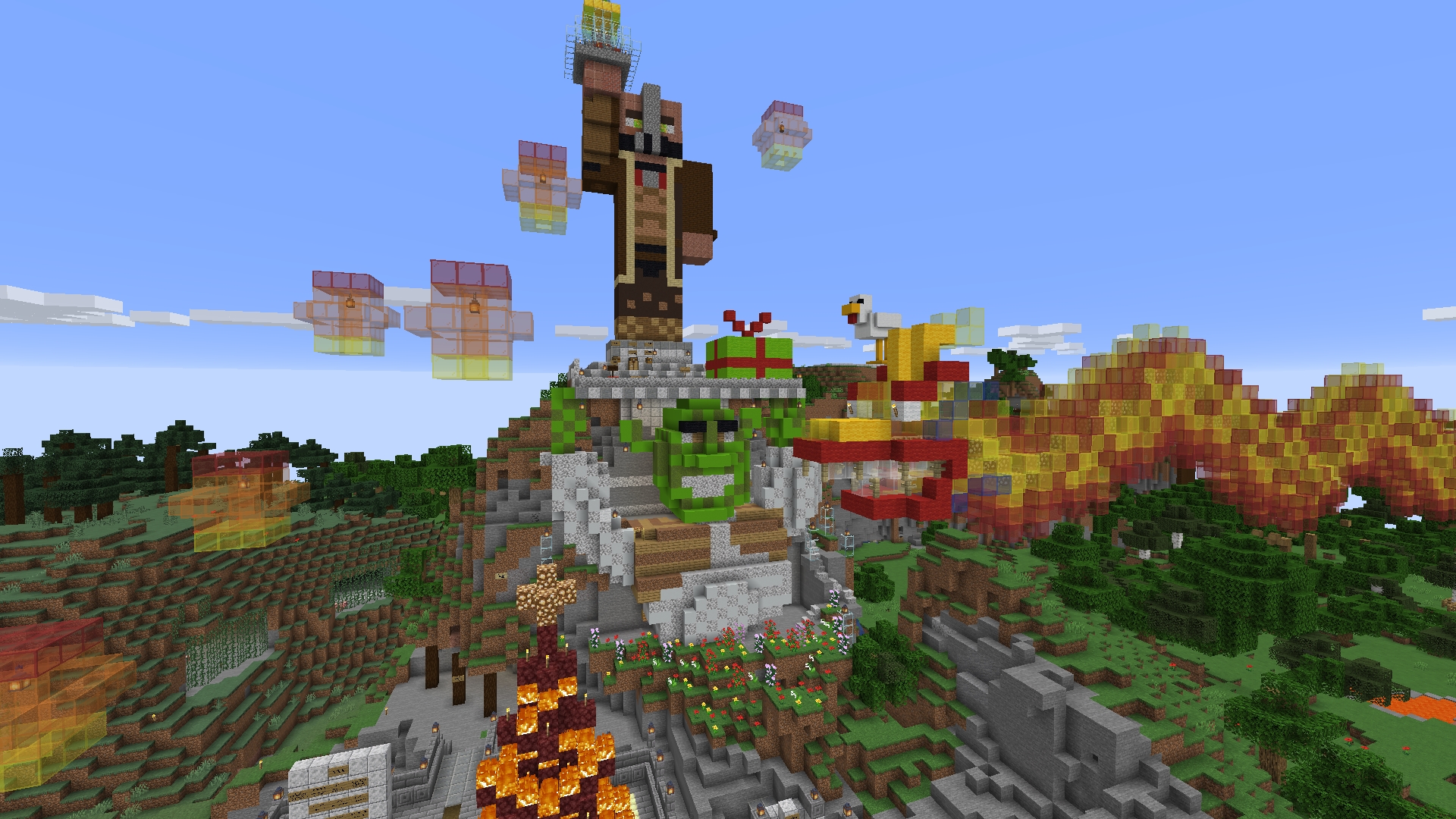 This statue now marks the site of our first founding, visible for miles around. It's a statue of Shrek, Atlas-like, supporting Bane off of Batman, who is holding a beacon of green light that goes all the way to space. Signs all over the place warn of an impending event called "Mincemas", which I suspect may be something to do with the burning Christmas tree made of meat in the bottom left here. Oh, and see the chicken perched on the dragon's head? Optical illusion. That's a titanic statue of a chicken on a distant hill. 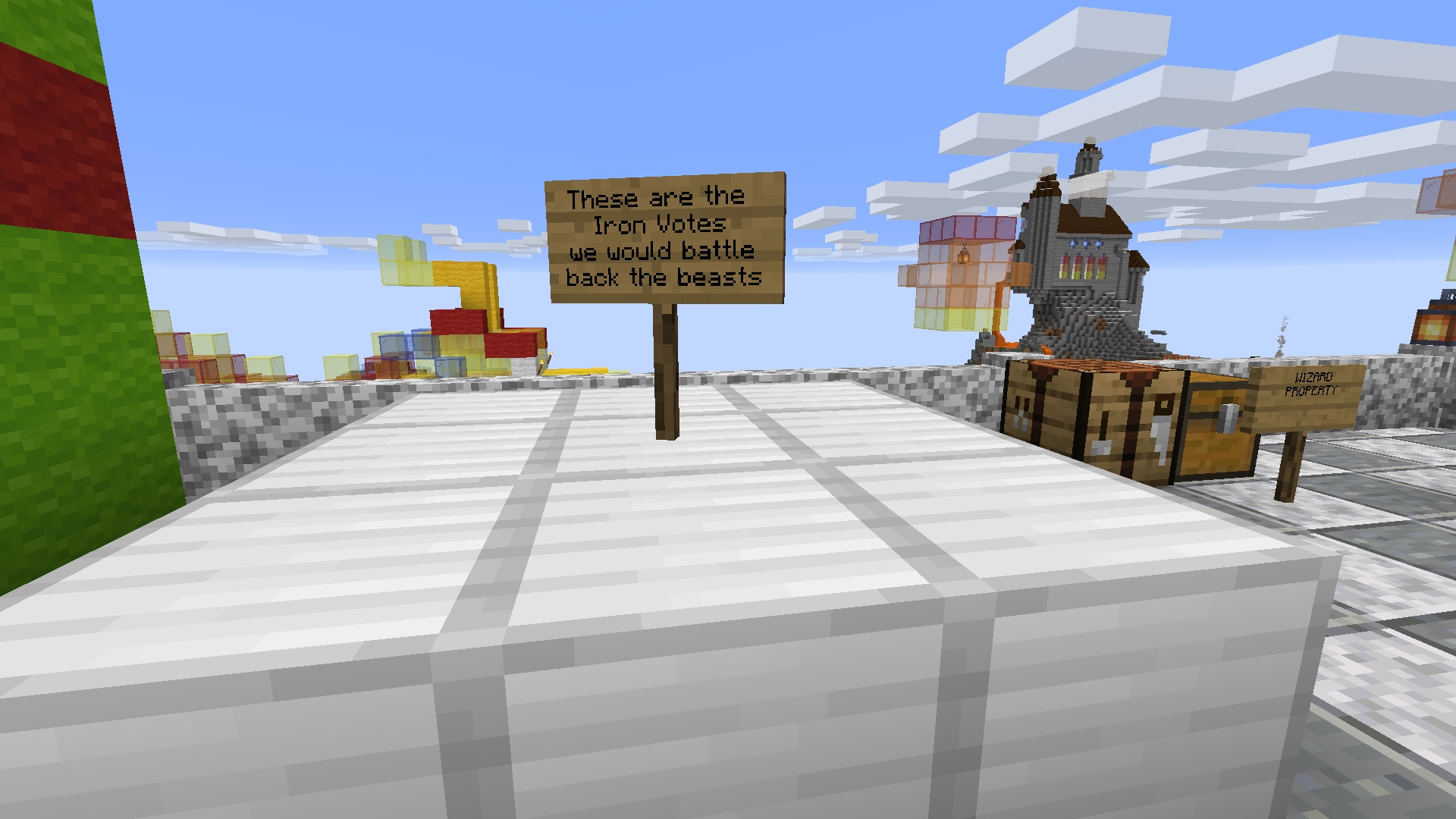 By Bane's feet is this iron block, with a cryptic political statement inscribed on a sign atop it. When I left the server, I gave every member full mod powers - essentially, making them gods. What struggles took place here, between these immortals? What were the "Iron Votes"? What beasts had to be beaten back? 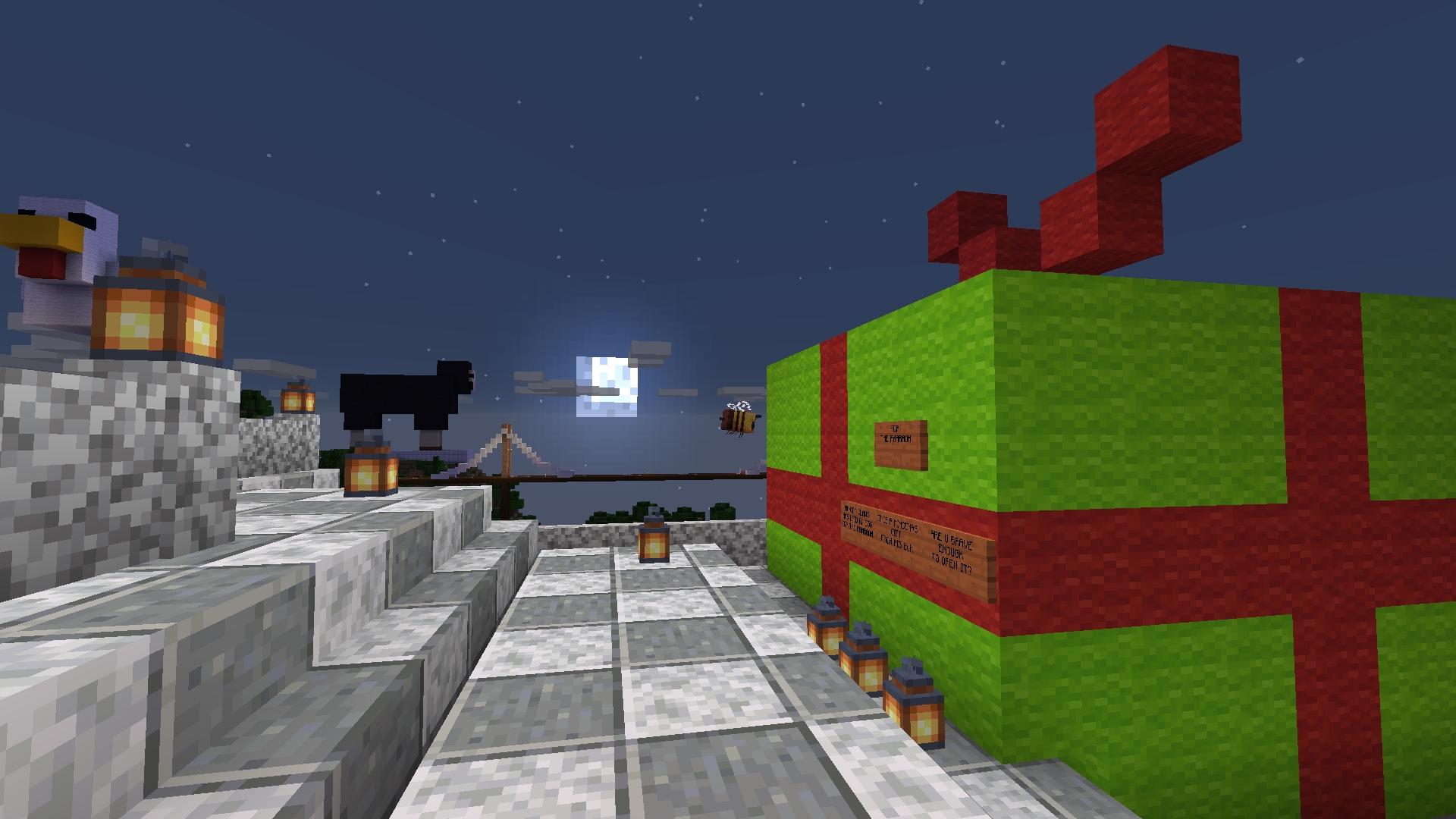 As a bee glides past in the dusk, I notice that the huge green present on Bane's platform has a note on it, addressed to "PHARAOH" - was this my... Mincemas gift? The note goes on to tell me that "Mincey claws has laid a eg for Pharaoh... from him bum". Somewhat anxiously, I bash open the side of the parcel, to reveal... mince (that is the server's name for Netherrack, apparently, due to its texture). The mince is hollow, like a scotch egg. One of my companions idly recalls that "there were polar bears in there once... until the accident". I don't ask about the accident. 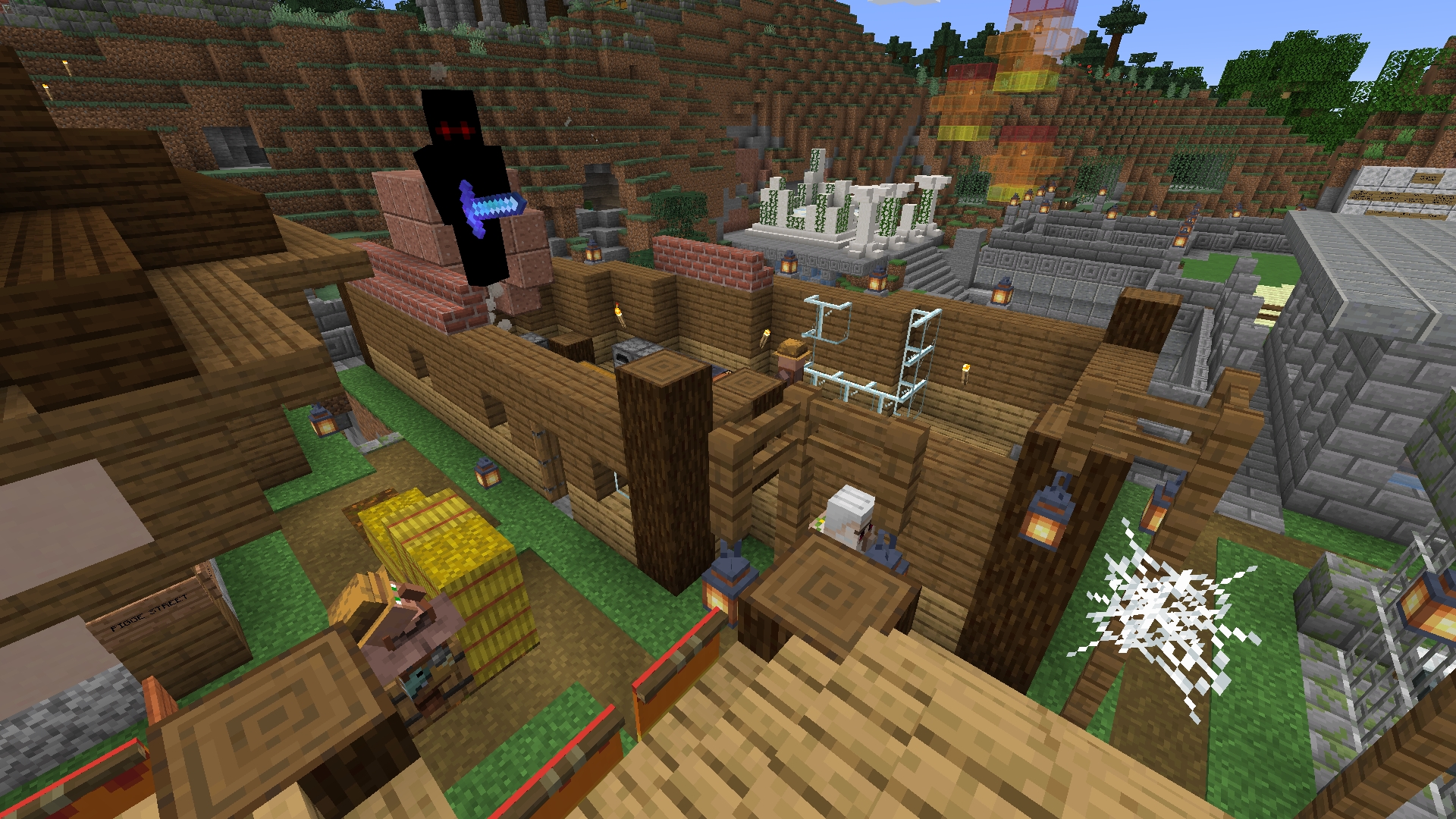 Meanwhile, it seems the town built during the age of the Shrek cult has experienced multiple waves of expansion and collapse. Now it is half-demolished in some places, half-built in others, and I am told that the "real" life of the server has long moved North. Now, these ruins are pottered around by villagers and their golems, eking out a strange existence in the rubble. 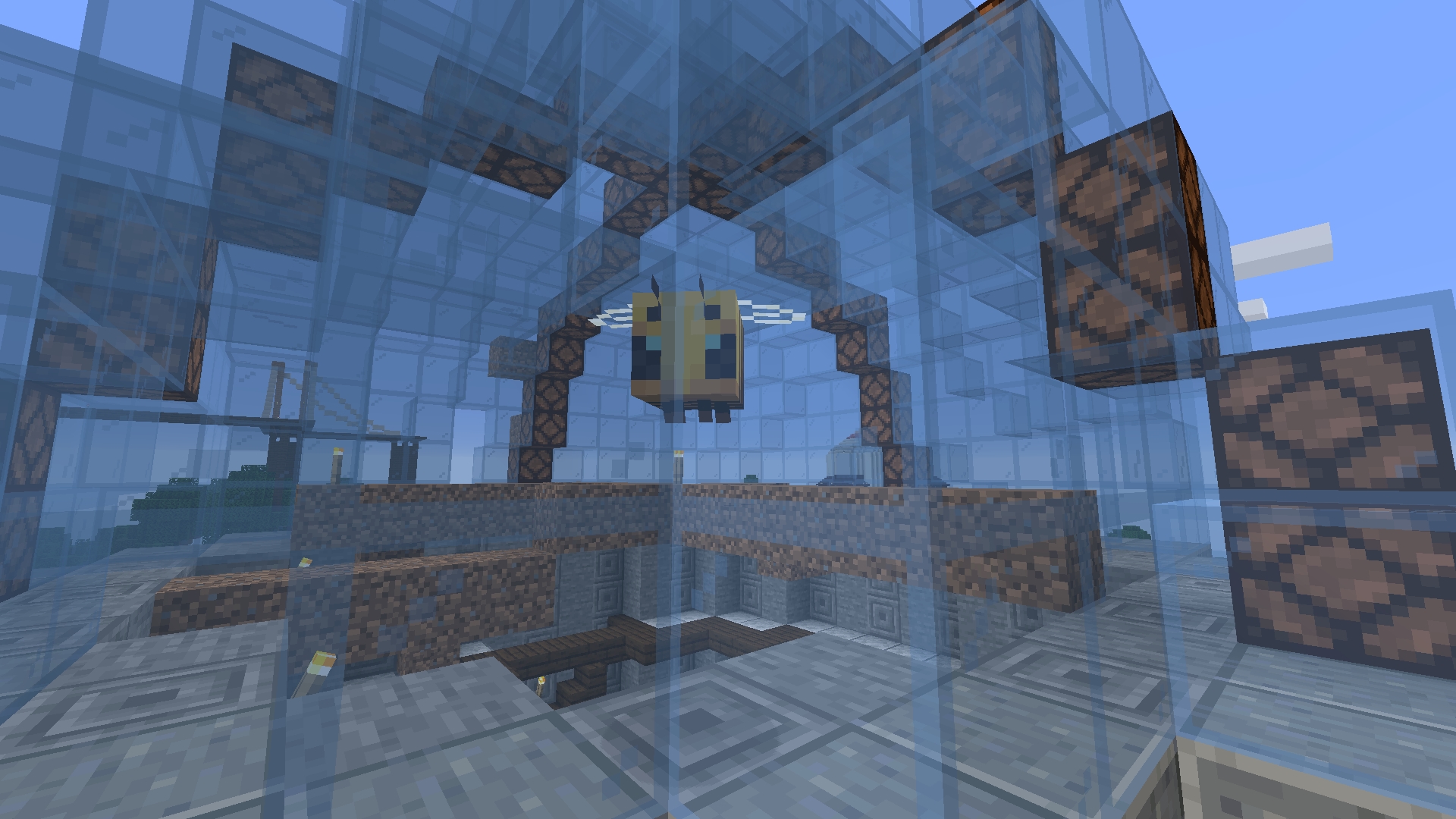 A moment of melancholy, as a bee looks out at me from its prison in the glass dome of the old cartographers' guild. Is the bee a cartographer now? 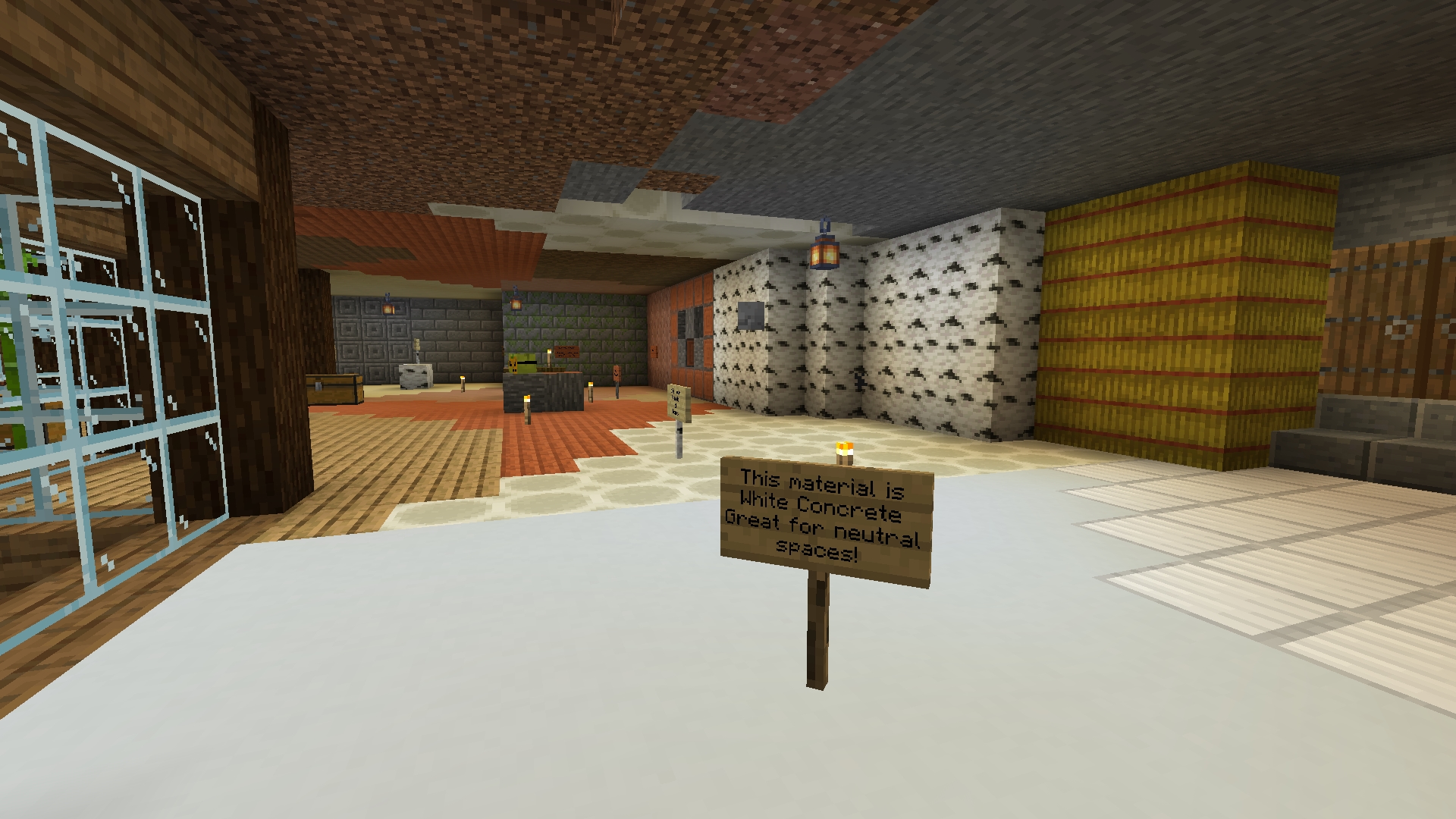 Exploring the ruins, we find a "design museum", where surfaces of dozens of block types have been laid out, along with helpful signs annotating their properties. It's like a sort of Grand Designs version of a wiki, and I like it a lot. 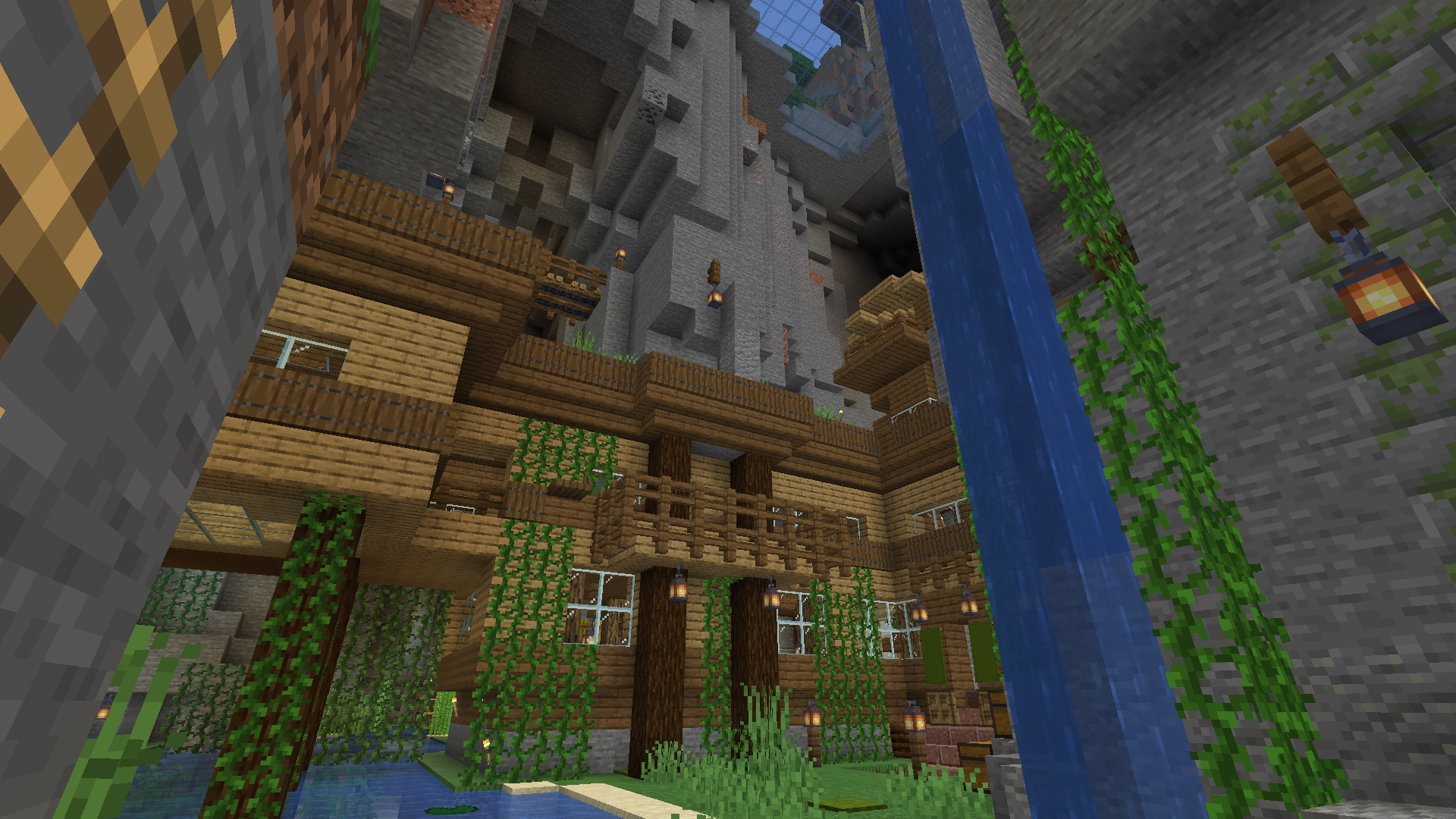 Breaking our way into the caverns beneath the city through a built-over minecart track, we find the old underground town that I and my friends built, long before even the madness of Shrek worship overtook the world. Sealed away beneath the strangeness above ground, it is a peaceful, time capsule of a place. 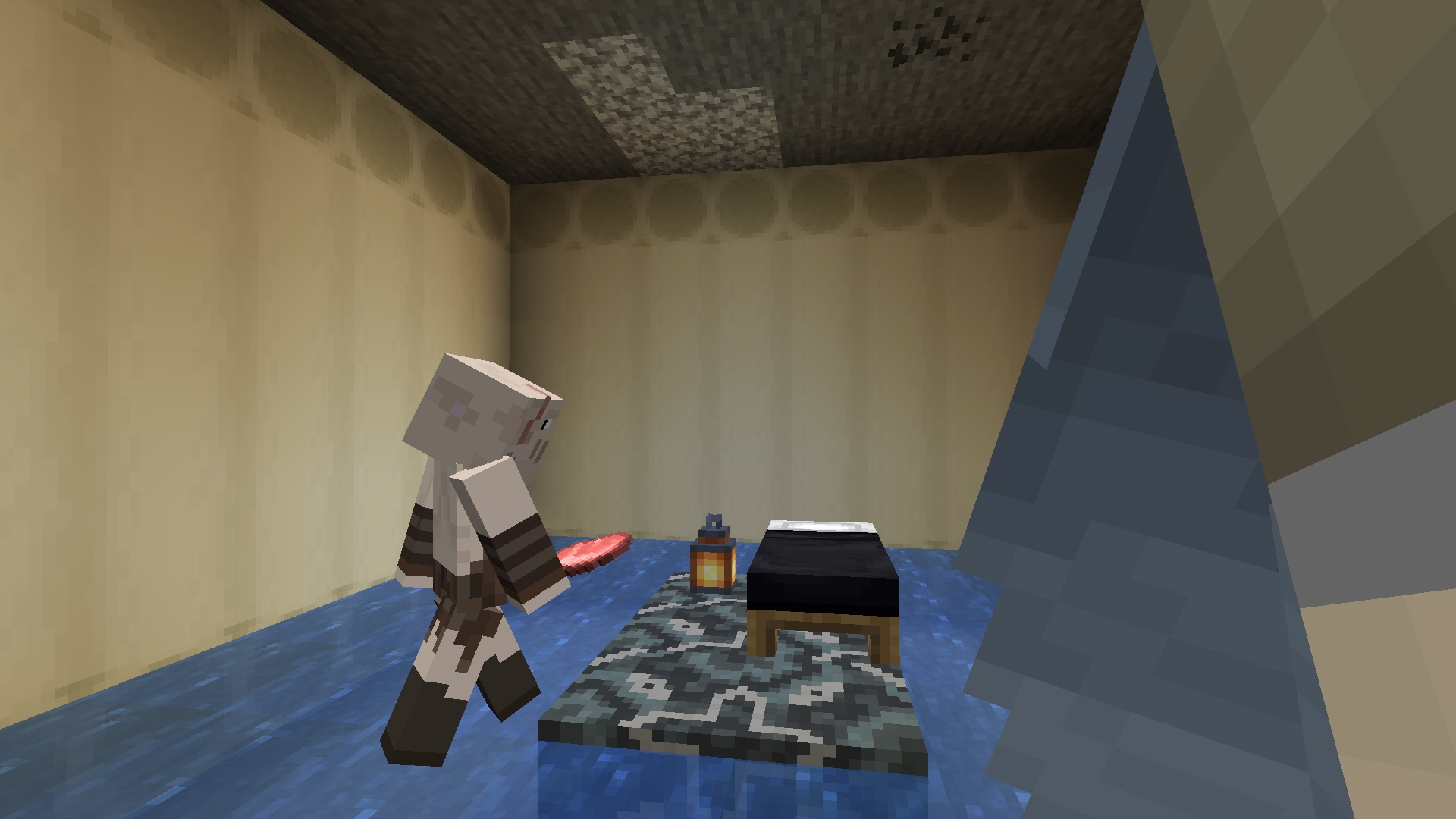 That is, until we find the Bone Room. Clearly, someone else has been squatting here, and their sense of decor has a dark energy to it. We make a hasty exit for the aboveground, lest they return. 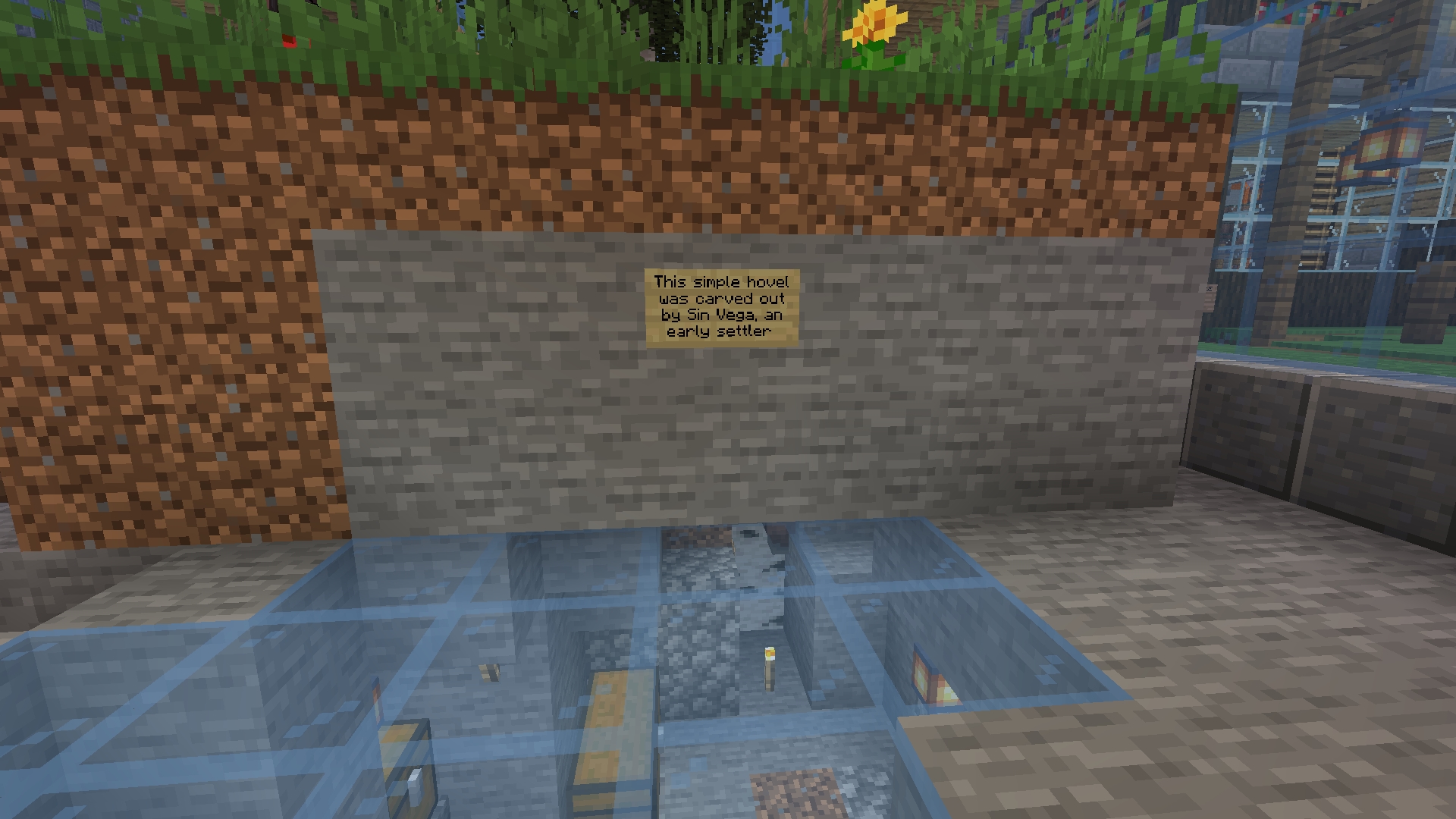 Before leaving the town, there's just time for a poignant visit to Sin's original hovel, preserved beneath glass in the "museum of the way we used to live". 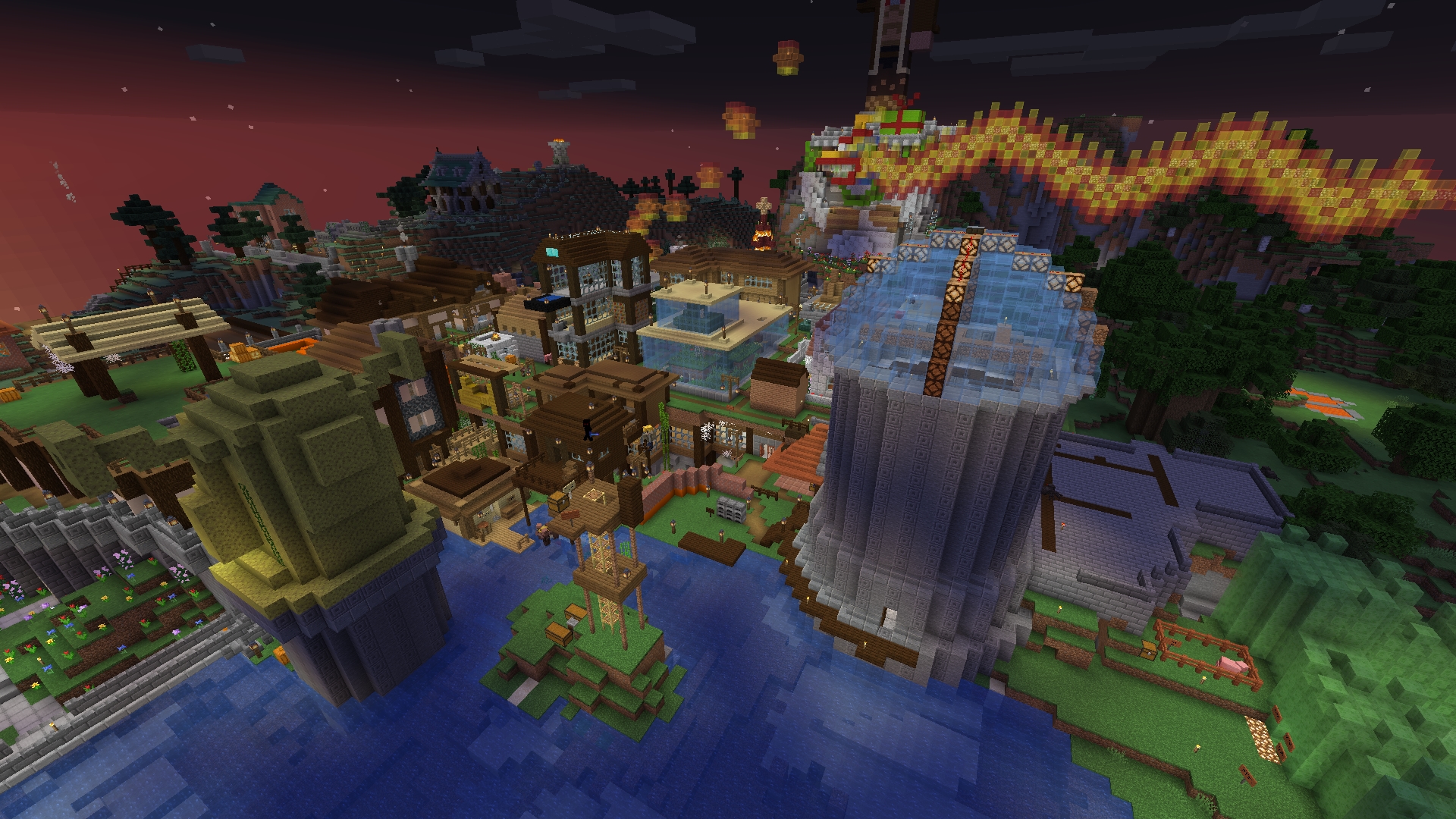 Here's the ruins of the starting settlement in full - you can see the case around Sin's hovel right in the middle there. It's nice to see some things are still sacred. As we reflect on the passage of time, we gather our party, replenish our supplies from the many, many abandoned chests in the old town, and prepare to move North. From here on, warns one of my companions who has kept an eye on the server through the winter, things get strange.

But nothing will prepare me for Thomas The Tank Engine's Arse.