The Motorstorm series on the PS3 were spectacular (if straightforward) rough-and-tumble racing games. You drove fast and occasionally knocked out other cars. Codemaster's upcoming multiplatform successor, Onrush, bears a lot of superficial resemblance but scratch just under the surface and you'll hit something completely unique. I played a few rounds of it at EGX Rezzed, so allow me to try and explain how it all works, once you're done watching this class roundup trailer.

So, character classes. In a driving game. This is because, for want of a better point of reference, Onrush is Overwatch on wheels. Two teams are racing the same circuit in classic arcade time-attack style, extending their team's shared time remaining by driving through checkpoints. Every time you can bump an enemy out of the way of a checkpoint or wreck them (forcing a respawn), that's a precious second or two that your team now have that the other team don't. Continue until one team times out and a winner is declared.

On top of that, each of the 8 vehicle classes has some variety of passive perk, an active ability and an Overwatch-esque ultimate skill that can be charged up over the course of multiple lives, and can swing the direction of a match unless countered correctly. Also similar to Overwatch: It doesn't matter how great your K:D ratio is, because if you're not driving through those checkpoints, you're dead weight for your team. There's a surprising amount of complexity to it, that I was trying to wrap my head around all while trying not to die too often in my 5v5 demo session. 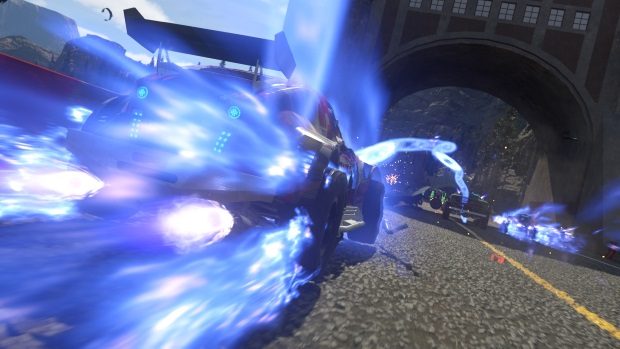 During my few rounds of the game I mostly played as the Outlaw biker-class. Very squishy, but performing tricks off ramps gives me extra Rush (Ultimate) charge, meaning that I was always drawn to higher, more stunt-filled track branches. Also, landing from a huge jump creates a slight stunning shockwave which doesn't serve much offensive purpose but means that you won't immediately die if you drop into the middle of the enemy team. The Outlaw's Rush ability is a simple speed boost, plus an aura that drains boost energy from nearby enemies.

It makes for a very unique experience. At the heart of it, you're still racing and trying to hit the same checkpoints as everyone else, but you've got these constant threats to keep an eye open for. Getting KO'd won't hurt your team much (and you can switch class on respawn, too), but a full team wipe will almost certainly put you on the back foot. If players can get their heads around all these mechanics, I'm really interested to see if this can catch on as a multiplayer standard on PC.

Onrush is due out on June 5th on consoles, with a £44/$60 RRP, although no date has been pinned down for the PC edition quite yet.