It started with Glenn Walker. 31, well-paid and past-it, Glenn was one of the litany of players I inherited as new manager of Brackley Town, languishing in England’s sixth tier. Glenn would come to be the emblem of how all of Football Manager 2020’s systems interact and collaborate to make managing my players’ hopes and expectations a unique challenge that frustrates as much as satisfies. More than ever, they feel like real people, with their own agendas and plans - and will stick the knife into you at any given opportunity.

But first, some context.

It had been a tricky start. My tiny new charges were already in the relegation zone, easily swept aside by all comers. The kind of club with no money, the kind of team with no backbone. The kind of ground with no toilets. But I got the typical boost that all new managers get, with the players actually deciding to turn up and cobble together a few wins and draws, taking us out of danger. We were, whisper it, in genuinely good form.

Meanwhile, the board were expecting me to build towards a play-off push in two years time and sign players under the age of 23, because, I don’t know, reasons. Enter Glenn Walker. Or rather, exit, because I unceremoniously show him the door after a month in order to free up some pennies to sign some new, better, younger players. My captain, Gareth Dean, comes to me complaining about letting a senior member of the team go, demanding that I sign a replacement. I refuse, calmly explaining that Glenn wasn’t part of my plans. Gareth has a tantrum, refusing to back down, and ends up storming out, livid. 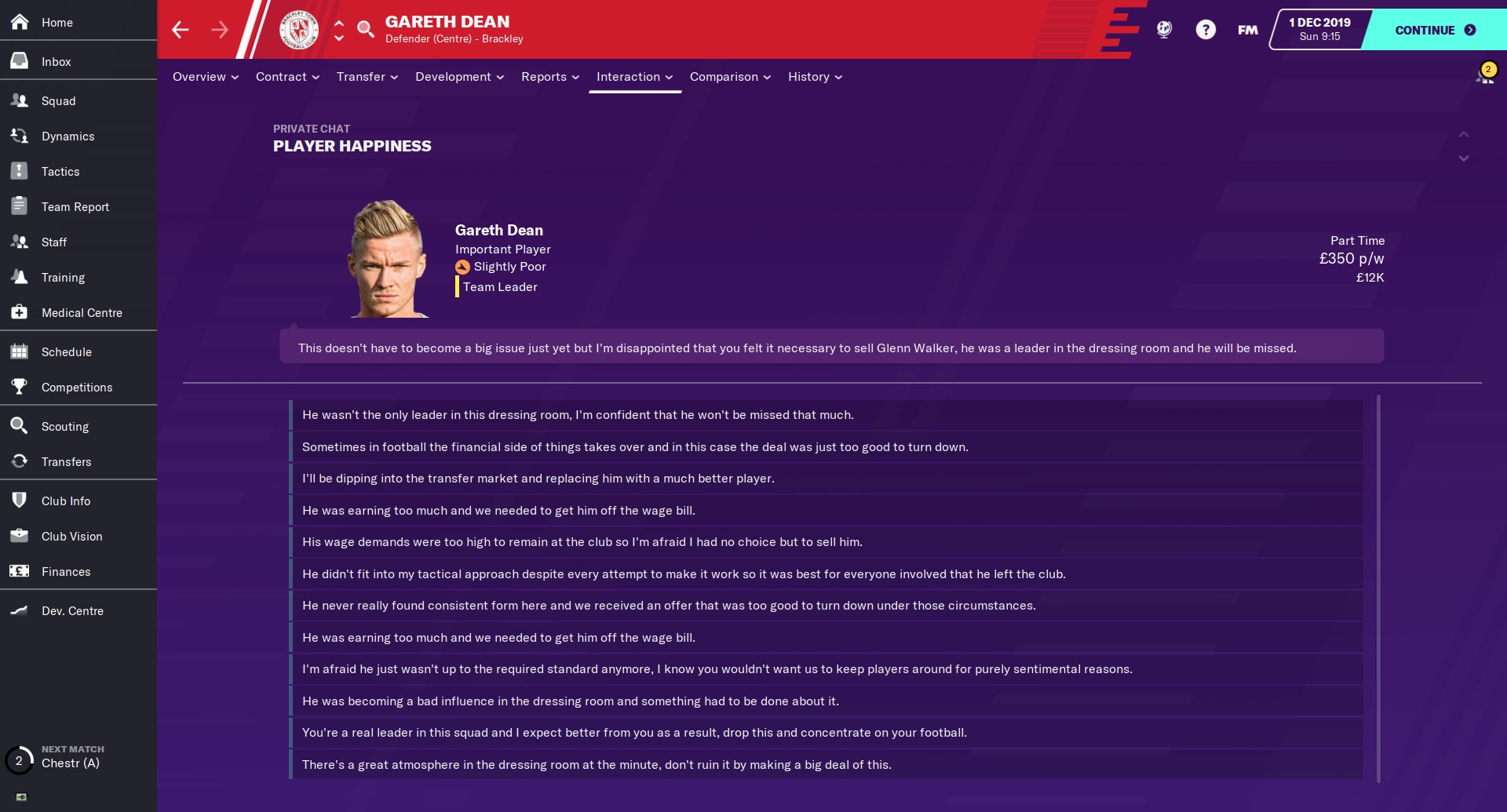 FM games have had effective approximations of conversation for some time, so this kind of interaction is nothing new. It’s what happens next that illustrates how well FM2020’s systems create a domino effect.

Gareth essentially leads a rebellion against me amongst the players, stoking up discontent about me selling off our prize donkey. Seeing that most of the team is unhappy, I call a team meeting, where multiple dissenters, led by Gareth, refuse to be satiated and remain angry. Mercifully, though, other members of the squad do become calmed. 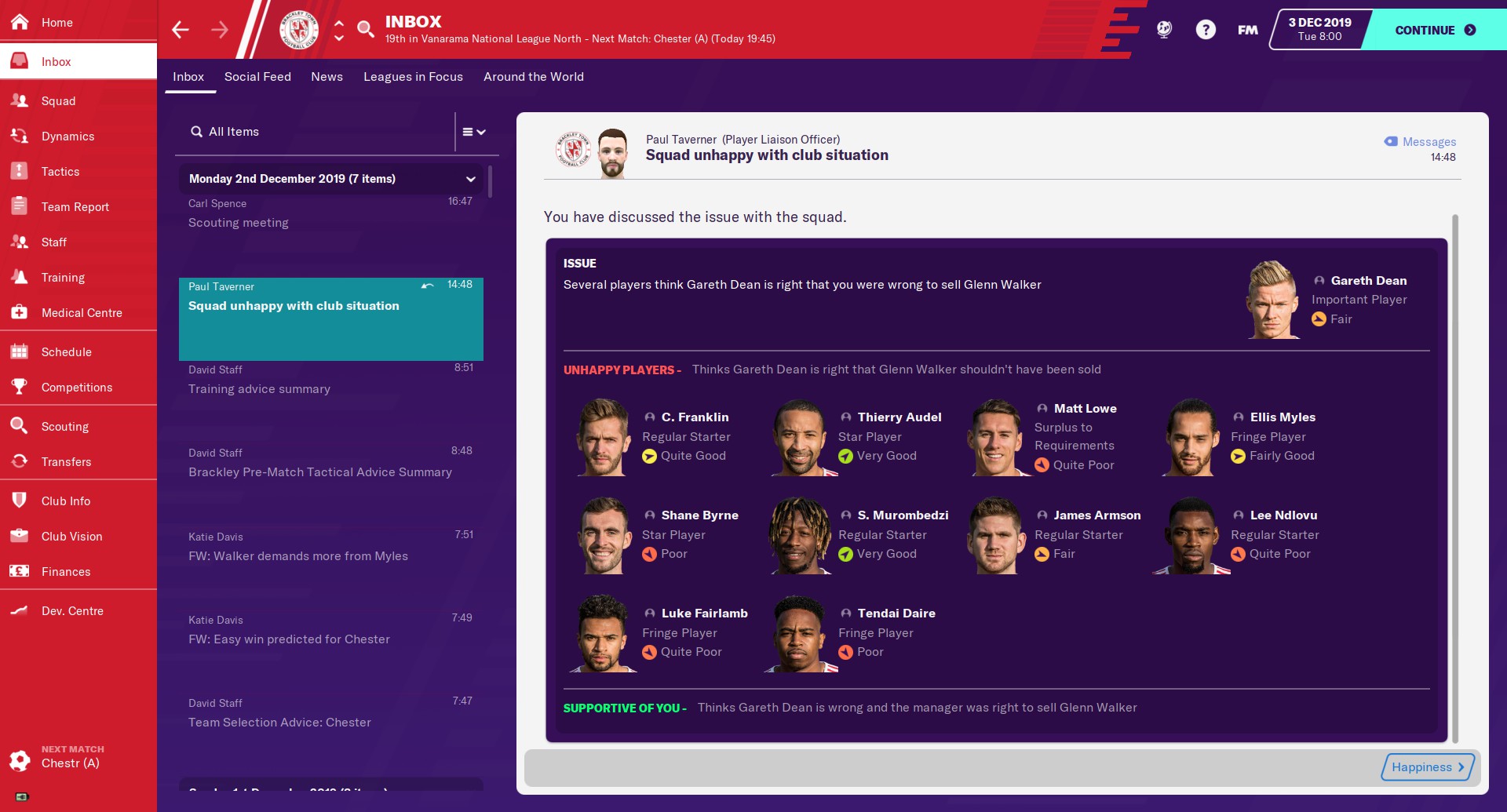 But this only splits the team. Those on my side are unhappy playing under Gareth Dean as captain, and the others who don’t agree just want to see me sacked. The entire squad is now in civil war. 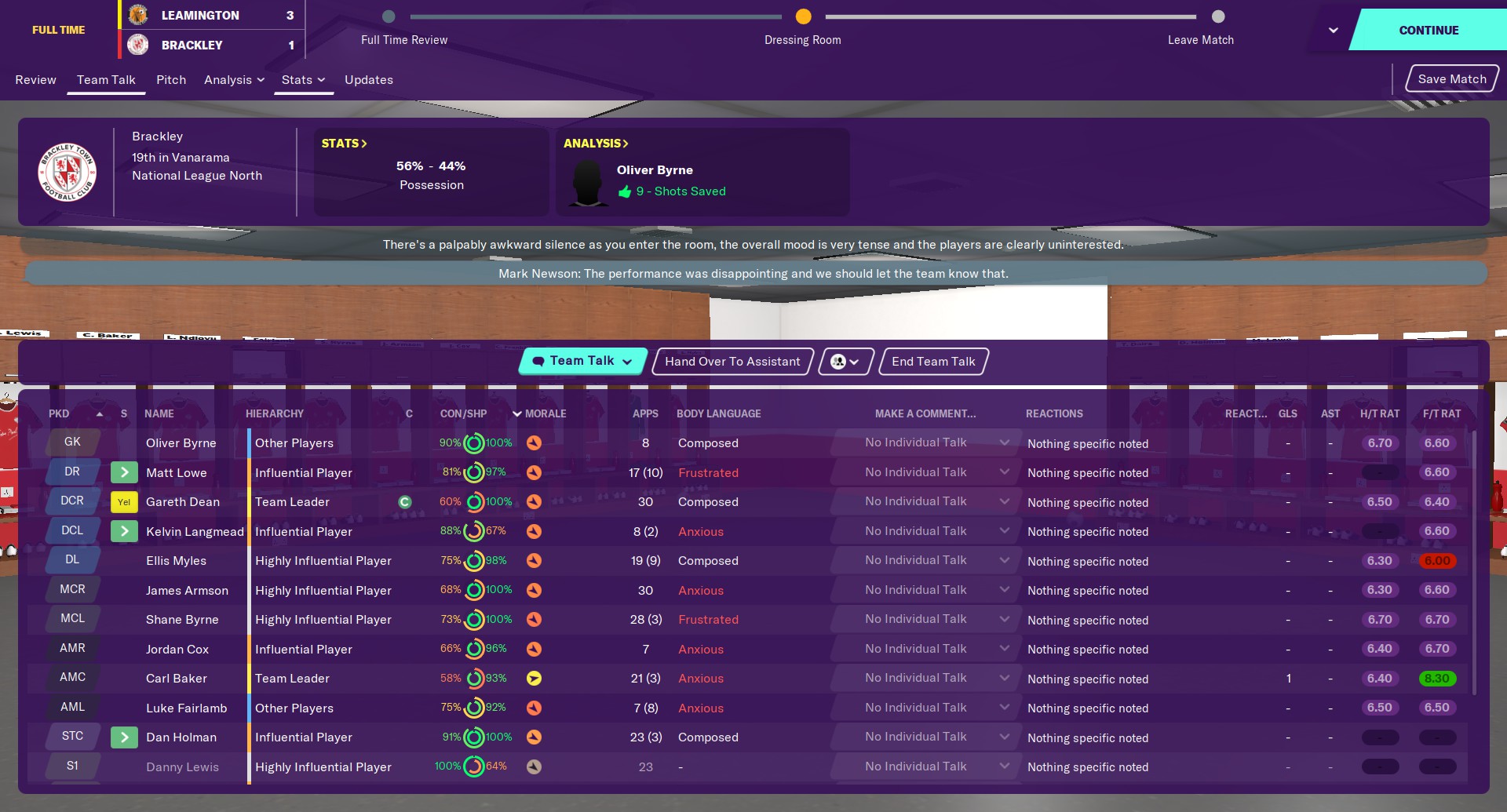 It’s at moments like this that it does feel like the game is actively leveraging my own inexperience against me. Throughout this process, the game constantly reminds me that some of the players are struggling to motivate themselves to play for a manager of my “low standing”. Charming. Meanwhile, the very nature of coming to a new game means new UI, new features and new ways to accidentally start the wrong player. Both IRL and in-game, I am a rookie.

In fact, the only players who have been drama-free are my new signings, to whom I made realistic promises and whom I’ve promised to develop into lower-league stars. I get a brief flash of pity for, of all people, David Moyes. No wonder he was obsessed with bringing in Marouane Fellaini at Manchester United - I miss the feeling of having friends.

If you're keeping up, now everyone hates each other, I hate all of them, the fans and board hate me, and my new signings are sitting crying in the middle like children whose parents are arguing about custody in front of them. We slump to the bottom of the table. The on-the-field failures mean even the players who were on my side have now lost faith in me. But they genuinely don’t feel like my fault! 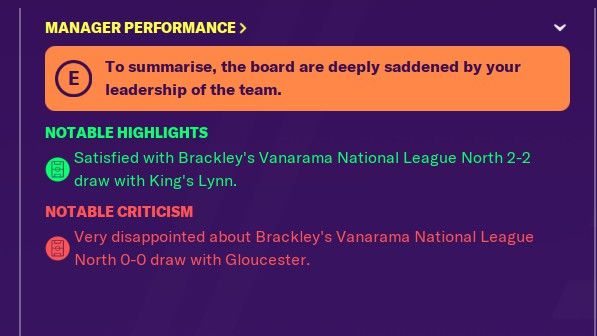 And that’s one of the genius strokes of FM2020. It makes you feel completely powerless, in the way that real-life managers seem to in post-match press conferences, or in shots of them standing on the touchline, completely alone, arms folded, soaked through. It all comes to a head in a final, climactic team meeting with the core leadership group, consisting of captain, vice-captain, and a couple of the older players who have been at the club for a while.

I beg. I beg for more time. I beg for my job. My spamming the “(Passionately)” conversation tab seems to work, as they come to the decision that I seem pretty, ahem, passionate, about things, and that I deserve a final shot.

We scrape a win that week. And another the following week. And a draw the week after that. I turn the ship around, and survive relegation by a hair. Only four months later at the end of that season do I finally hear the last of Glenn. Gareth holds his hands up to admit he was wrong.

And one of my best strikers finally stops angling for a move elsewhere because of it.

Glenn, you’re now at Chippenham, and I wish you only the best. But curse you, curse you and your lovely, warm nature that helped you make so many friends at Brackley.

If there’s a moral here, it’s that my entire game nearly unravelled because I said no just once to one player. From that moment on, the game just did its best work, quietly tangling me in a web of loyalty, hurt and expectation. Football Manager 2020 forces you to really have to back yourself, picking your battles and choosing approaches carefully. It makes you feel lonely.

And the end result is fear - fear of player power. The dressing room becomes a Greek chorus of young men, desperately ambitious, scared and vulnerable, commenting painstakingly on your failures - and baying for your blood while doing so. But if you can overcome that, the game does reward you with success.

A year on, my Brackley team are sitting pretty in the play-offs a year ahead of schedule, my decisions vindicated, my conscience clean. Oh, and that dissenting captain? I released him at the end of the season.