The next Playerunknown's Battlegrounds map will be a little 4x4km one--25% the size of its current two--and we'll get to play it on test servers next month. Developers PUBG Corp today laid out some of their plans for Plunkbat across 2018, which range from fancy additions like the little new level to refining and overhauling a number of existing parts. Expect prettier houses, new game modes, emotes, new vehicles, new sounds, more custom game options, more performance improvements, more anti-cheat, more, more, more, how do you like it, how do you like it?

"This year we want to involve our players in the ongoing development of PUBG even more than before," head honcho Brendan "Playerunknown" Greene said in today's announcement, "and to aid with this we plan to open an Experimental Test Server so we can get your valuable feedback on our feature/content development cycle sooner and for you to have a real impact on how our game changes and develops going forward."

That's where we'll find the new 4x4km map next month. Greene says it "should give you all a much more intense and faster paced Battle Royale experience", with players packed in closer and shorter rounds. He shared this concept art of the map's map: 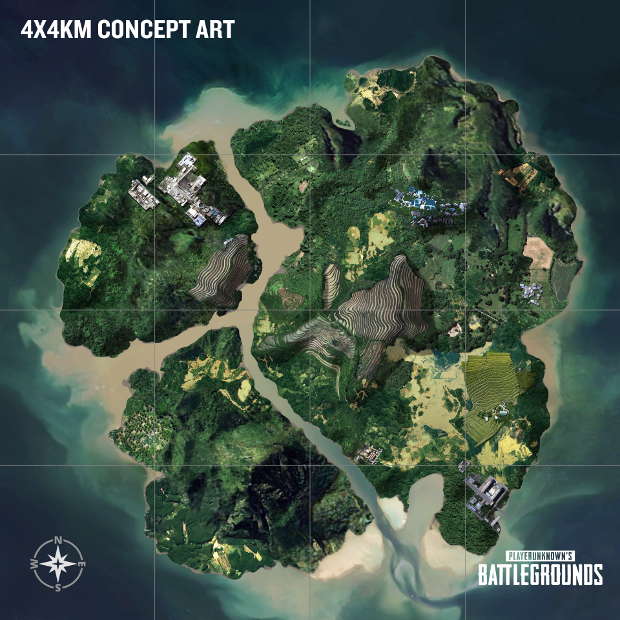 Based on the verdant flora and what appear to be paddy terraces and fields, I'd guess it's set in China or a fictional similar place in southeast Asia. Seeing as Plunkbat is huge in China and soon to officially launch free-to-play there, some sort of pandering China-ish map wouldn't be a huge surprise.

Greene mentions they're planning another 8x8km map too but doesn't show anything or say when we might get to play. He has said before that they were planning an Adriatic island map, though plans could have changed since then. In the meantime, you might enjoy looking at a fantastic concept for Scandinavian map made by a fan.

Let's rattle on through some other things coming. Emotes!

Bullets penetrating limbs (to reach juicy facemeat behind) and vehicles! Achievements! Squad voice chat in the main menu! Overhauled player animations, including new ones for getting in vehicles and changing seats! More responsive parachuting with new animations! New vehicle sounds including suspension! More player sounds, including different movement sounds for different loadouts and different breathing sounds for different activities! More spectator stuff! More custom game options, with more players allowed to use them! An API to pull player and match data out of the game! Other things! More exclamation marks!

The developers plan to release big updates every two months, with smaller ones in-between.

See the blog post for details on all this and more. Greene says that blog post doesn't cover everything coming in 2018 either, so cross your fingers if you've been hoping for something else.