Abstract multiplayer fencing game Nidhogg didn't need its minimalist style to be buried under a splatter of aggressively grotesque paint and gore. It didn't need extra weapons to upset the perfect balance and precision of its two-button combat. It certainly didn't need its titular wurms to chew the air with stumpy rotten teeth.

All a Nidhogg sequel really needs, to justify its existence entirely, is better netcode and maybe a couple of new modes to play with. By messing with the original formula, particularly with that divisive visual switch, Nidhogg 2 [official site] risks proving that more can sometimes be less. Here's wot I think.

The original Nidhogg is tense and often hilarious. Every round, both players start as equals, and then they push and pull and stab and flail in an attempt to move to the left or to the right. The fight is a combination of fencing and tug of war. The fencing part is obvious – your're both armed with stabby swords (as opposed to slashy swords), but the tug of war part is just as important.

Fights start in the central area in a series of symmetrical corridors, tunnels and paths. The immediate goal in each area isn't to kill your opponent, it's to reach the point at which the screen stops scrolling and flips to the next stage. And you're always going to the left or the right, while yor opponent is trying to go the other way.

There are no points for killing your opponent and it's more a delaying tactic than anything else. Dead fencers can't make any progress, or prevent your own, but they're only down for a couple of seconds before respawning nearby.

Sometimes you die because you ran into the point of a sword held at eye level, and sometimes you end up in a brilliant stand-off, blades occasionally clashing as you struggle for supremacy. It probably lasts around six seconds but it feels like you just re-enacted that one swordfight from The Princess Bride or the elegant brutality of The Duellists.

Time a swish of your weapon just right and you can disarm an opponent, flicking the sword out of their hand. It spins through the air and clatters onto the ground, and then you stick them through.

Nidhogg is fast and sometimes frantic, but it's always precise. Blades connect with one another, or with flesh, and the timing of every parry and poke is vital. Nidhogg 2 does not always feel precise. In adding a variety of weapons and scenes that require clambering and negotiation of conveyor belts, it has become a less predictable game.

You and your opponent still start as equals but there are four weapon types where once there was only one, and these work on a cycle. Kill your opponent and he or she will spawn with the next weapon in line, then the next, and so on. This means that you begin as equals but soon one of you has a bow and the other has a knife, and then there are different weapons littering the floor, and somebody falls down a pit.

I played a few rounds with Graham and afterwards described Nidhogg 2 as Super Smash Nidhogg. It's nowhere near as chaotic and erratic as Nintendo's beat 'em off (the edge of the screen), and characters don't have special moves of their own to fit with their wonderfully weird designs, but it isn't as refined as the original and, for me, that takes away a lot of the appeal.

Nidhogg 2 is no longer a fencing game. It's a hacking and slashing and shooting and stabbing game. Five minutes can go by without a single parry or smooth disarm as daggers play off against bows, and hulking great broadswords smash opponents into pulp. Instead of a thumb war, it's rock, paper, scissors.

That's a little unfair, as there's no hard-coded system of counters with the weapon types, but they introduce enough variables to chip away at the core sword-on-sword simplicity that made the original such a joy to play. Occasionally you'll still have a brilliant round because the fundamentals of the two button combat are the same. You can jump, slide, parry, kick, stab and (now) slash and shoot – it's a tactical twitch game. The action is so fast that you can't quite believe you ever have a chance to react intelligently, so when you do there's a sense of having mastered swordplay mixed with a suspicion that blind luck was on your side. 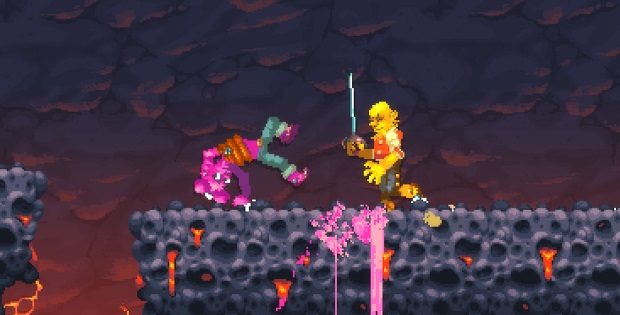 And that's as it should be. For all my complaints, Nidhogg 2 still manages to make me laugh and smile and occasionally curse. A fight can collapse into a farcical chase or a sequence of drop-kicks and head-stomps, or it might go off the rails as both competitors insist on throwing their weapons as soon as they spawn and then dance toward each other, kicking and jumping.

Nidhogg has always been a silly game but the weirdness of the victory animation, which sees the winner devoured, no longer feels like an odd punchline because the whole game has become a grotesque parade. I hated the screenshots when I first saw them and I wasn't alone, but in motion I quite like the new look. It's deliberately ugly in a way that I rarely see in a game, like a nineties platformer that got sick or a claymation scene that's gone horribly wrong.

The worms are no longer exclusive to the finale of a fight and have a similar role to Dishonored's whales. They're butchered, hanging from hooks, but also destroying airships and generally being a nuisance. Sometimes you're running along their guts and sometimes you're in a volcano or up among the clouds. The stages are packed with detail, and have some tricksy elevation changes and traps, but even though I'm not dead set against the graphics, I still prefer the simple style of the original.

That's true of the combat as well. Nidhogg 2 has more to offer but it all feels like a distraction from the perfection of the central fencing mechanic and melee feels so overpowered, rewarding proximity and button mashing rather than the careful poise of the duelling. You can add modifiers to games, including a 'Baby' mode which makes both characters crawl and slide and hop, but you can't strip out everything new and just play the original. There will always be at least one extra weapon variant. 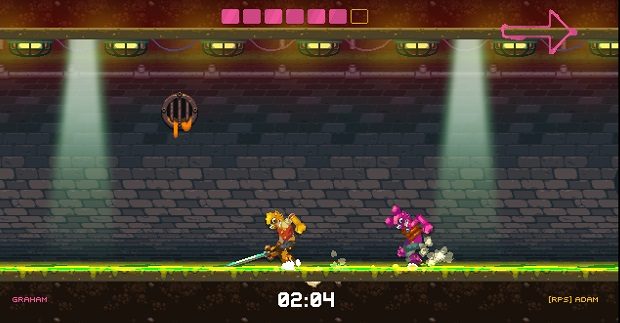 Well, you can return to the original by...playing the original. But Nidhogg 2 does have the one thing that a sequel needed. Better netcode. I've had a fine old time playing with friends and strangers alike,and that's enough to make Nidhogg 2 a better proposition than the original if you're not playing with people in the same room. And that beats playing against the computer, where there's nothing more than a brief arcade mode introducing the levels and weapons.

It's slightly more cluttered and distracted than its predecessor, but there's still plenty of fun to be had. Much as I love it, Nidhogg never lingered on my playlist for long, partly because the netcode wasn't ideal. Nidhogg 2's changes to the formula would, I suspect, start to irritate me more over time, and I can't imagine I'll be going back to it a few months down the line. If you've never Nidhogged before, this might be the best place to start since you'll almost certainly be able to find a non-laggy game much more quickly, but it's missing some of the original's elegance, and not just in the visual department.

Nidhogg 2 is out now for Windows and Mac, and is available via Steam for £10.99.