If you click on a link and make a purchase we may receive a small commission. Read our editorial policy.
Developer: Monkey Moon, Black Muffin
Publisher: Raw Fury

When I'm in the back of a taxi I'm most likely to be hoping that neither I or the driver end up coming off as an awful person. I am extremely unlikely to think of the driver as "a priest, a confident, a friend". But for all I know, you, the person reading this right now, are a big weirdo and pour your heart out whenever you're in a stranger's car. And if that is the case, you are potentially a customer in Night Call.

Night Call is a gig economy simulator and/or murder mystery, set in present day Paris. You, a cab driver and the surviving victim of a serial killer, wake up in hospital after spending two weeks in a medically induced coma, and the police immediately blackmail you into investigating your own case. This is clearly absurd, but the game barrels through it quickly enough that it just about gets away with it. 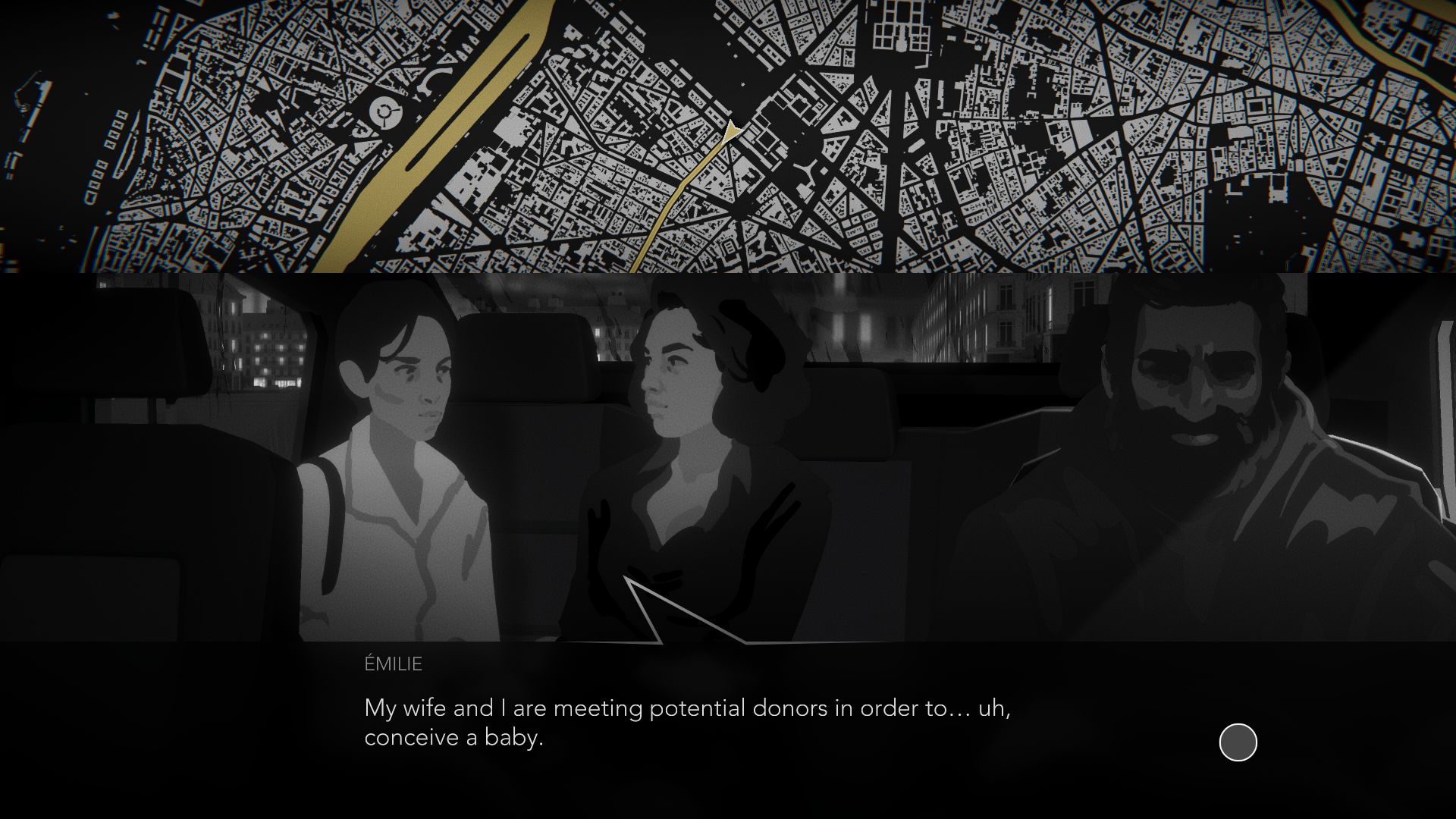 So anyway. The quintessential hard-nosed-lady-bitch detective gets you to ask around and investigate leads during your night shift. At the same time, you need to get enough work done on your shift to not go into horrific debt. From a satellite style map of Paris you pick up rides, and then chat to them while they sit in the back seat, about… stuff.

The murder-mystery part is simultaneously minimal whilst taking up half of the game. You pick up rumours from the radio, newspapers, and sometimes whoever is in your back seat. You can follow leads to locations or informants, which costs you time and sometimes a big chunk of change. Along with information you get from your clandestine detective pal, it all goes on your big bumper corkboard of clues at home, to be connected to Polaroid photos of the suspects. Every evening, you look over what new things you've learned and try to eliminate suspects. 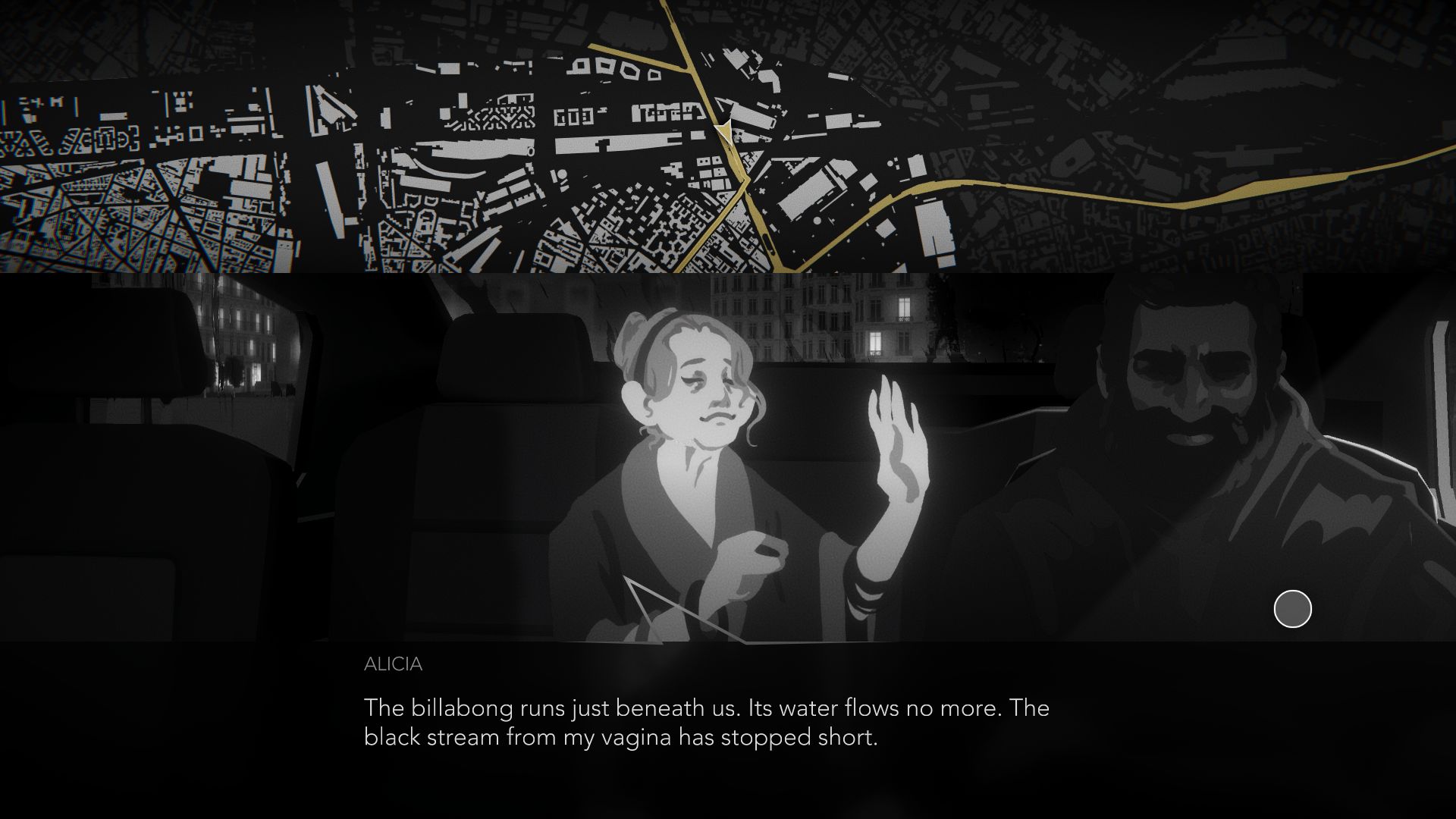 Concrete connections are made by the game automatically, and you can vaguely shove around the loose clues if you want, but you're not really detecting. Mostly the information goes from, for example, a crime report to being on the board without ever passing through your brain -- you might be told the witness statement said X or Y, but you don't get to read the statement itself. At the end, if you name the wrong suspect, the detective will even tell you she thinks you're wrong. It's not exactly Jonathan Creek, is it?

Being a taxi driver, on the other hand, is pretty meditative and chilled. When I played I became annoyed that I had to spend time and money on the murder bit, which I kept forgetting existed until I slumped back to my apartment to stare balefully at the clue wall. I was at least fully inhabiting the player character, who didn't seem any more enthused about it than I was. 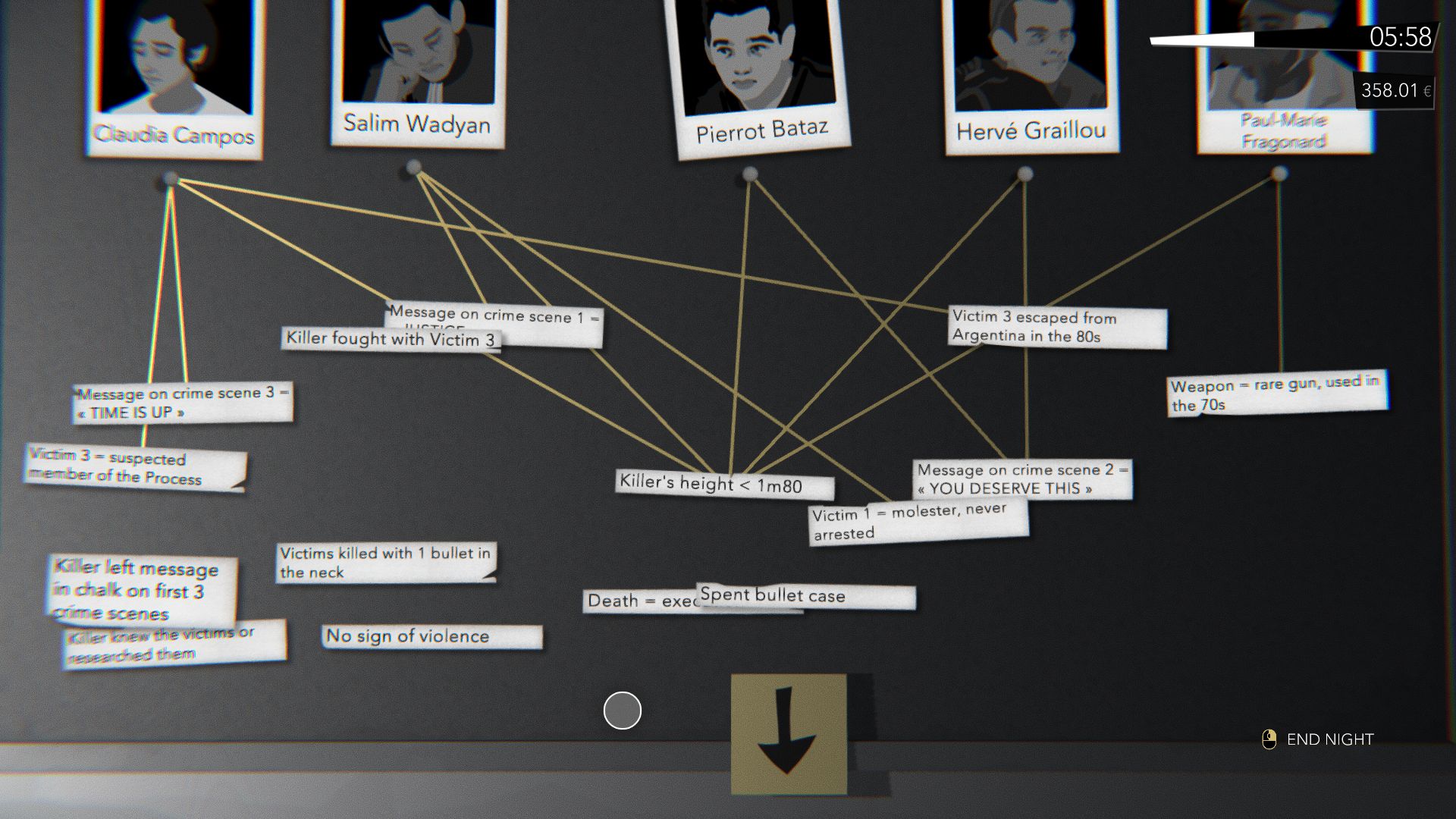 In fairness to Night Call, the point isn't solving a murder, the point is that you can only solve it because people talk to you. There are 75 different customers you can pick up, shuffling around Paris at 2am, and they vary wildly. Middle aged ladies writing poetry. Burnt out, bitter DJs who never made it big. A young man who hates cops, but is dating one. They're only in your car for a couple of minutes, but it's enough for them to leave something with you, and you can get different responses from them by choosing different things to ask them, or tones to use.

Night Call uses its characters to bring up topics I wasn't expecting it to, including race, religion, sexuality, perhaps most notably, terrorism, something that has of course touched Paris in recent years. But to its credit, it often employs a light touch and approaches things from interesting angles, and has a dreamy, magical realist kind of style that sometimes sees you, e.g., giving a lift to an actual cat. It rains, everything is black and white and grey, apart from the occasional neon sign. Ah, the night shift. 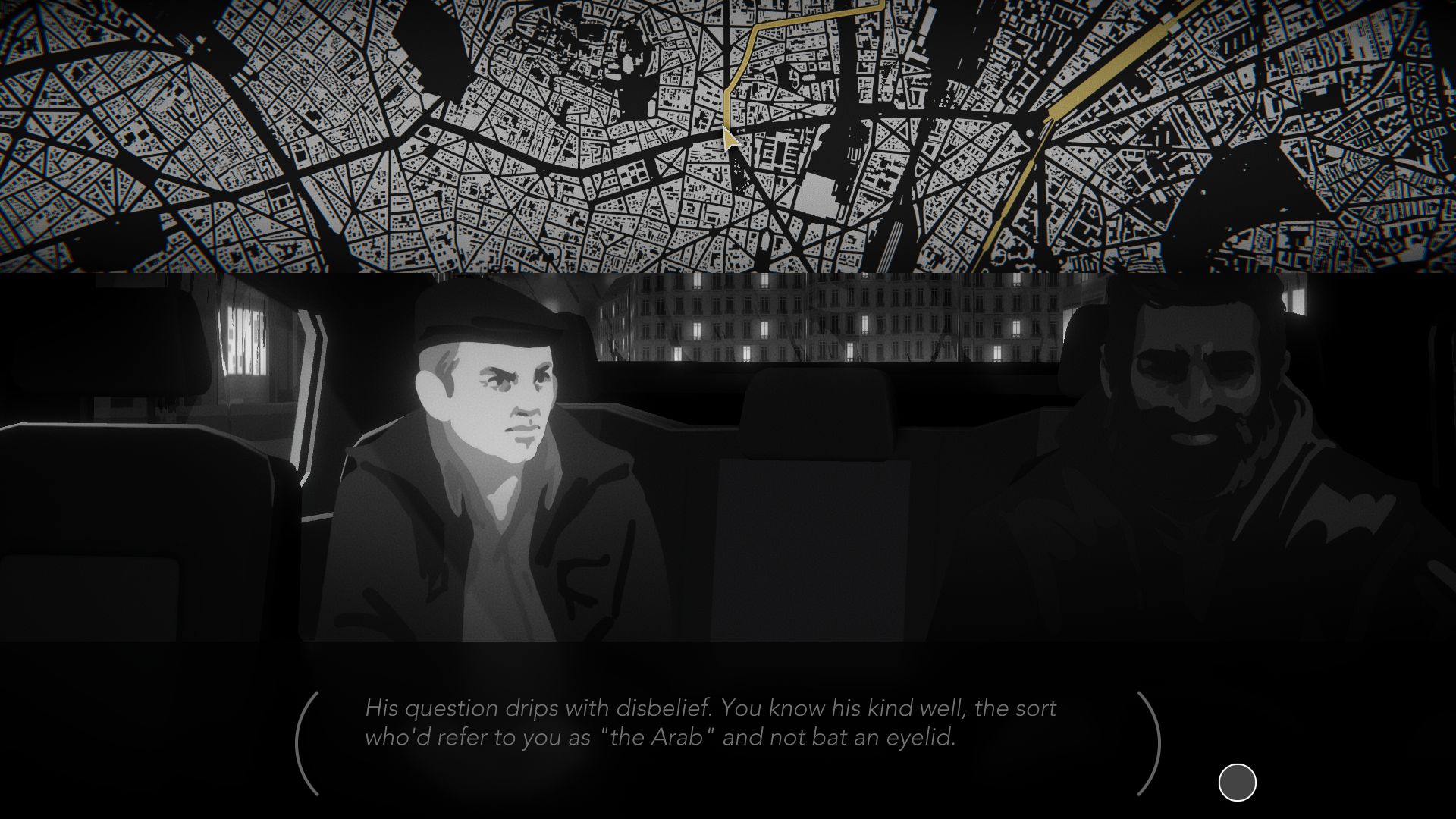 But Night Call is, at the same time, capable of being heavy-handed. A priest gets in your taxi and has an extended conversation about how you and he are the same viz. confession. And the magical realism can lose sight of the realism bit. In one case I got a pivotal clue from the ghost of a small boy. You think Morse would take that to court? It'd never stand up!

But for the most part I really liked chatting to the weary travellers. The most rewarding part is encountering the same customer several times, because they remember you, and will open up more each time. It's like being an archaeologist blowing dirt away from a skellington, except the tiny brush you use is conversation. And at the same time, you learn a bit about who your character is too. 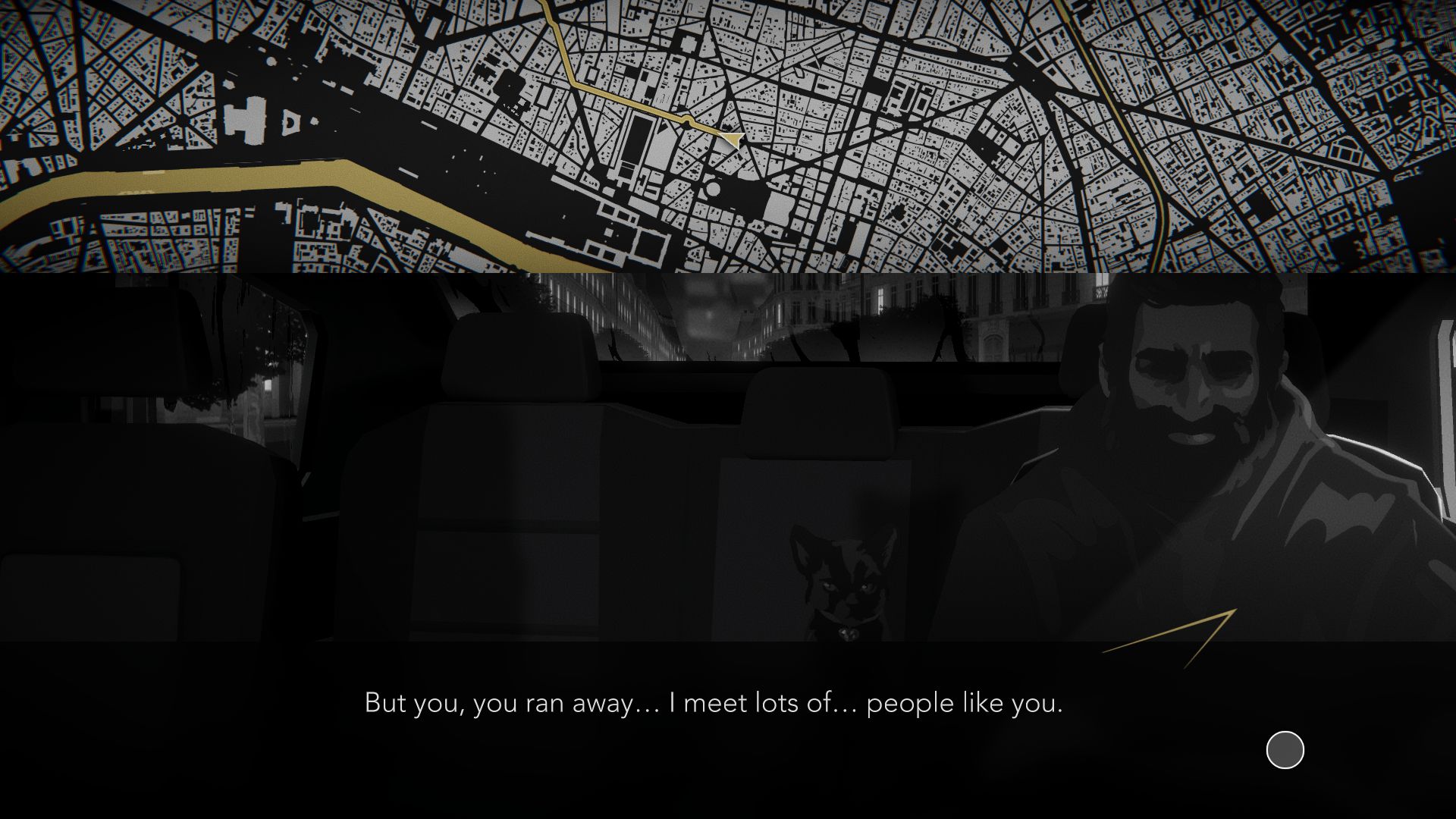 Night Call does feature more than one murder case, so I was hoping to become a sort of hapless private detective known to all the weird night owls across the city, but those cases are actually each their own self-contained version of the game. Each starts with you waking from your coma, except a different serial killer dun it, and your relationships with the passengers have been reset to 0. Given that the identity or chase of the killer isn't the most compelling bit, it's deflating to lose the sense of character progression you'd hard-won through repeated drives to Charles de Gaulle Airport, and there's less reason to pay attention to conversations if you've already had them.

So, it's a game with two key strands that feel forced together when they don't really work in tandem. I like both ingredients in theory, but they don't coalesce successfully, like how a vinaigrette salad dressing will separate into oil and vinegar until you shake it up again. Except balsamic dressing is obviously delicious. Night Call isn't quite that. It's not bad, though. A honey-mustard, maybe?