If you click on a link and make a purchase we may receive a small commission. Read our editorial policy.
Premature Evaluation is the weekly column in which Steve Hogarty explores the wilds of early access. This week Steve has been recaptured, and has been playing a Doom-y first person shooter called Nightmare Reaper.

Hey, it’s me. I was gone for a while, but now I’m back. Back to prematurely evaluate some early access games, like an impatient baker wrenching open the door of an oven and plunging his fist into a molten ball of uncooked dough. Like an open heart surgeon dialling down the anaesthesia to wake his patient up while they’re still on the operating table, just to let them know the operation is going okay. That’s me, that’s my job. Graham won’t let me review finished games in case I’m irreparably spoilt by an abundance of levels, features and polish. So here I sit, trapped in the RPS basement, waiting for scraps of half-done roguelikes to come clattering down the dumbwaiter they feed me sausages through. They told me a wizard has done a curse on the entire outside, so I wouldn’t even like it up there anyway.

Nightmare Reaper is a retro-styled first person shooter in which you play a patient at a psychiatric ward repeatedly diving headfirst into her own demon-addled psychoses, which, luckily for the player, roughly resemble a series of procedurally generated Doom levels. Let’s put that unhelpful mental health stereotype in a little box and kick it under the bed for now, because what’s going on inside this woman’s brain is wild, an unvarnished mix of classic FPS gun blasting and roguelike weapon drops. Dead enemies erupt into coins and treasure as well as gibs, leaving behind the hordes of wealth required to upgrade your skills, while chests, crates and clutter sometimes hide new weapons, from common to legendary, each with randomly generated attributes granting them damage bonuses, elemental effects and the like. 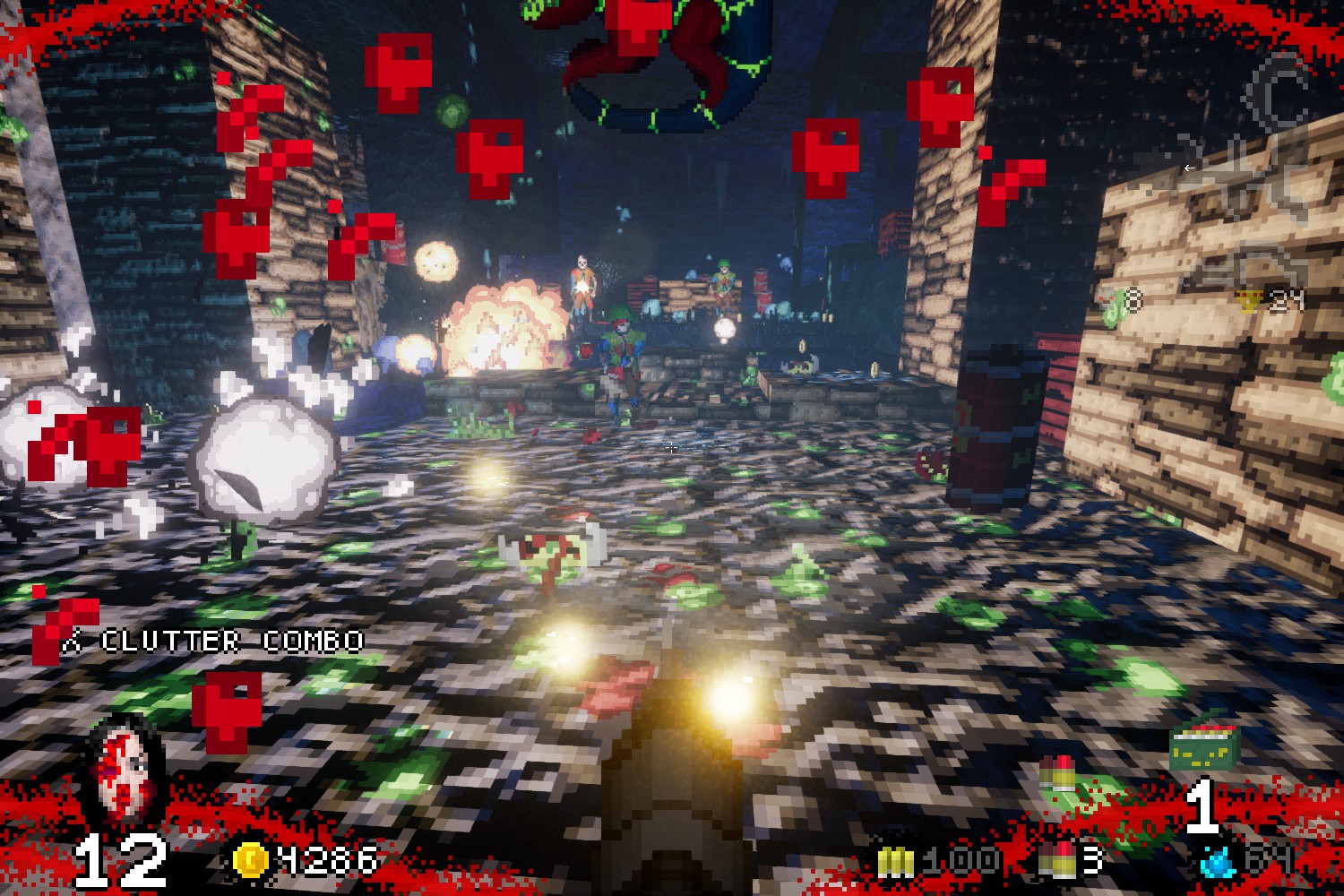 It’s great fun, and feels precisely the way it should: all punchy and zippy, with big guns that really boomph stuff into their constituent parts. There’s a lot of really excellent boomphing happening here, and a lot of sparkling blood splotches left smeared across the low-poly environments like dropped soup. Nightmare Reaper is a throwback to the genre’s golden age, to the fast-paced circle-strafe-athons of yesteryear. It’s part Quake, part Blood, part Wolfenstein 3D, with the weird and untethered armory of Duke Nukem 3D. There are secret areas hidden behind walls, a face that becomes bloodier as you take damage, coloured keys for coloured doors, sprites that are always pointing towards you, sticky grenades and fireball-blasting spellbooks, and the occasional large arena style roos teeming with enemies awaiting mindless slaughter. Nightmare Reaper feels about as 90s as stonewashed jeans, tearing up a photograph of the pope and setting fire to a mountain of dead cows.

But it does have some original ideas too. Crack open the menu screen (for no reason at all it resembles a Gameboy Advance SP, which is still the greatest looking handheld Nintendo has ever made) and you’ll find a skill tree modelled after the Super Mario Bros 3 level select screen. Here you can spend your hard-won coins to improve your speed, health, ammo capacity and so on, but not before completing a game-within-a-game, a mise en abyme in the form of a brief side-scrolling platformer. This hurdle to unlocking new skills is a pleasant enough surprise at first, and an interesting way to zhuzh up what’s usually an uninspired and functional corner of the menu screen, but the platforming itself is janky by comparison to the rest of the game, with bad collision detection and jerky physics, like somebody’s very first go at GameMaker. And the unlockable skills themselves are nothing to get giddy about, generally improving stats rather than adding new features. 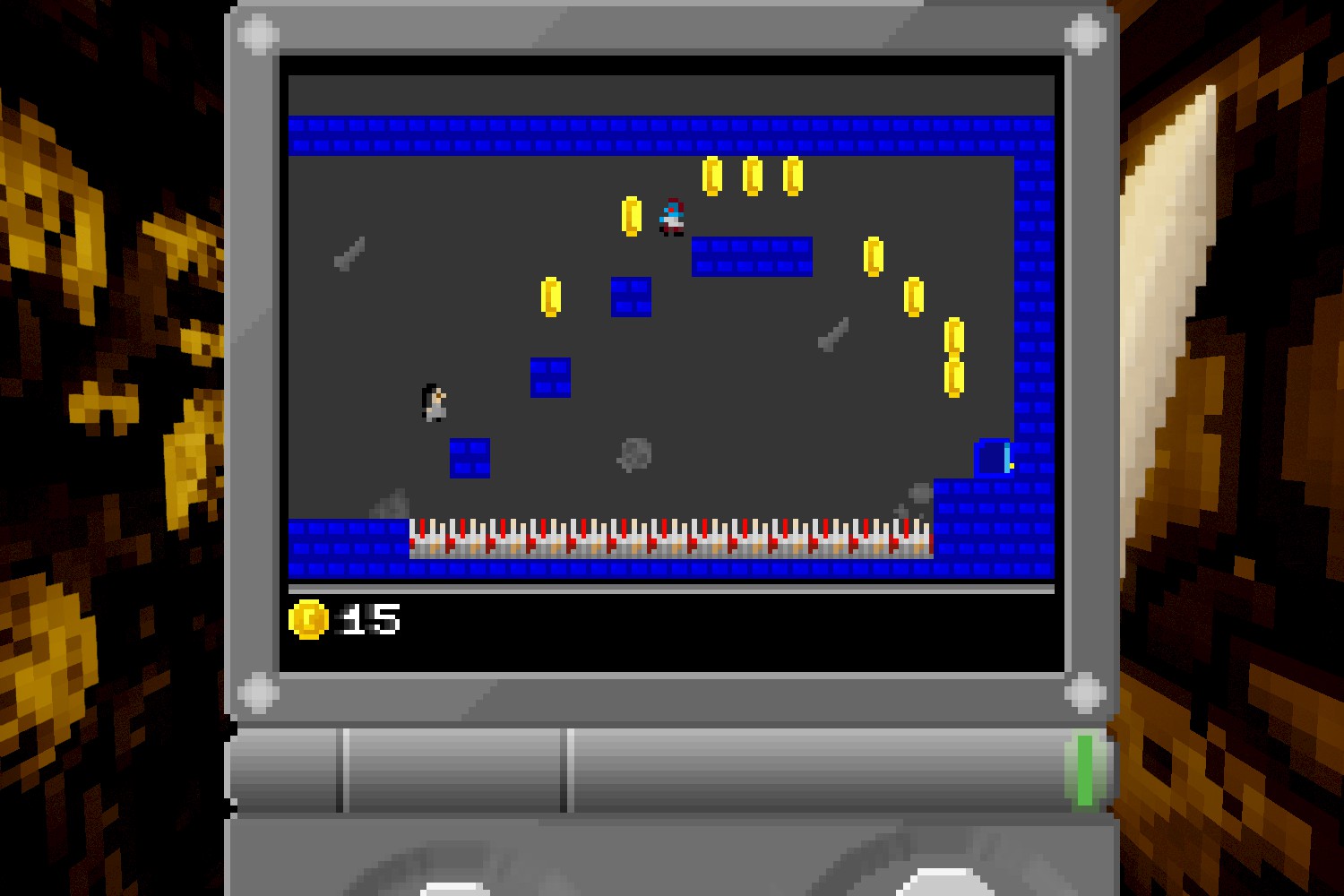 Most of the interesting variety is instead found in the weapon drops. These range from big swords and throwable battle axes to double-barrelled shotguns and uzis, grenade launchers, lightning wands and mystical tomes that spurge out hot blasts of elemental energy. In the early access version there are already 30-something of a planned 80-something different ways to murder demons, and each weapon has an alternate fire. There’s a chainsaw with a grappling hook attachment, solving the age old problem of wanting to chainsaw something when it’s all the way over there. You can find a sniper rifle, which turns the standard run-and-gun tactic on its head and slows the pace of the game way down.

Very early on, I found a legendary claymore that would set things on fire, and would routinely wade into rooms packed with enemies and cleave everything until it was just strewn with burnt messy ribbons. Nightmare Reaper is full of delightful, unexpected detail too. If I cloved a tree with my flaming sword for example, it would catch fire and burn down. Enemy sprites would be clooven at the precise angle of attack of the clarven of the claymore. Sometimes I would clerve a demon and it would just stand there for a few seconds as all of its blood spurted out, Tarantino-style, before it collapsed in a dead, clorven heap. 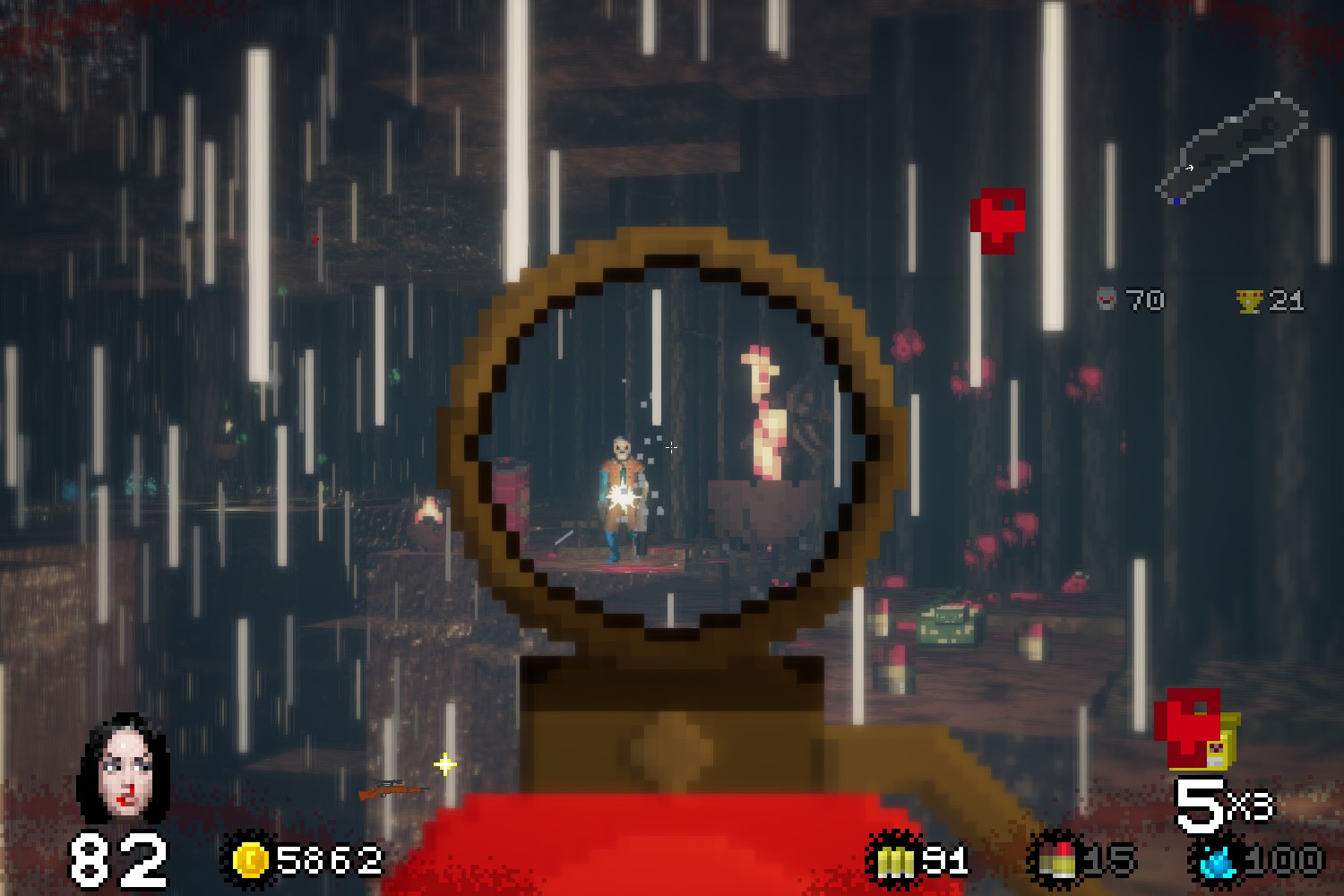 You get to keep one weapon after each level, while the rest are sold off for gold, so you can carry your favourite bazooka with you for as long as you please. Quite how the inner workings of your psyche have a functioning economy is never explained.

The early access version of Nightmare Reaper contains the first episode of three, which is actually a pretty giant chunk of the finished product, taking around eight or nine hours to complete. But it likes to dawdle. The procedurally generated level design repeats itself pretty quickly on repeated plays, with familiar chunks of rooms recycled and reorientated to create new layouts. As you proceed to different areas – there’s a cave, a cave but with mushrooms, a spooky forest – you’ll wish that new enemies, challenges and environments could be delivered with all the same frequency and fervour as the game’s swelling roster of weapons.

But all that will come, as sure as sausages come tumbling out of the hole in the wall in the basement where I live. Nightmare Reaper is one of the better examples of the new and increasingly populated genre of retro-styled shooters and a chance, if ever it were more needed than right now, to slip backwards in time and pretend that the last few years were some horrible dream.