UPDATE: Atlas Rises is out now and is 4GB - so says the download my Steam account is currently doing!

Did you know that I still play No Man's Sky [official site]? I started a new save recently with the intention of building a base and following the storyline and possibly having a greenhouse and then ended up ignoring all of the above and instead pootling from planet to planet, chasing a sort of multi-headed cactus creature. Business as usual for Pip.

BUT I've been keeping an eye on the imminent update, mostly just to see what it brings and how my ongoing voyage might change. It sounds like Atlas Rises (which is what update 1.3 is called), in addition to ancient portals, terrain editing, 30 hours of new story content and so on, is also making baby steps towards synchronous co-op (i.e. a very basic form of multiplayer).

Singleplayer/multiplayer distinctions are one of the things which caused a kerfuffle when the game launched because prior to release the game lead, Sean Murray, had always maintained the game wasn't a multiplayer experience but had spoken of the capacity to experience other players in Journey-esque terms - that perhaps that would be the only way for your character to know what they looked like. Then when two players then ended up at the same location and couldn't experience one another's presence in any way it added to the ill feeling towards how the game had been marketed.

To me it felt like the encounters/moments were something Hello Games had wanted to do and believed they could do for a long time but then couldn't and stopped talking about it, perhaps assuming the situation's sheer unlikelihood would mean the question didn't come up after release instead of explicitly walking back specific claims. I don't think that's the right thing to do, but it's more nuanced than the more headline-grabby "Hello Games deliberately lied on multiple occasions" anger would suggest because it involves omission and intention and all those other things.

ANYWAY. That part is the least interesting to me as I have no desire to interact with anyone except the weird creatures in NMS so let's get it out of the way first! It's in the segment marked "Joint Exploration":

"Glitches in the simulation have begun to appear.

"Visualised by strange floating orbs, up to 16 players can see and communicate with one another, and explore the universe together.

"While interaction with others is currently very limited, this is an important first step into the world of synchronous co-op in No Man's Sky.

"While interaction is very limited, VOIP (Voice over IP) allows proximity based voice chat with other nearby explorers.

"Use portals to quickly travel to more populated planets, or to meet up with friends."

I like the idea that maybe you could just wander up to someone and start hearing ghost voices of chat. I could be No Man's Sky's Dererk Acorah! Voices from the aether telling me to tell you a message from someone called Mary who had a great fondness for Richard...

The top line summary for the rest of the update is as follows:

"In the Atlas Rises story, the fabric of existence is starting to falter. A mysterious new interdimensional race have appeared. Glitches are causing ancient portals to activate. Our story brings a new context, quest system and branching narrative to No Man's Sky. 30 hours of new story content. Double the lore and interactions of the existing game. Discover the truth behind the Abandoned Building logs, the World of Glass, the Sentinels, the Redemption of the Gek, and the meaning of sixteen... After Waking Titan, Atlas Rises."

Waking Titan was the ARG thingy with the cassette tapes which I was afraid might still somehow be part of the interminable Overwatch Sombra ARG. I have real ARG fatigue. ARG argh, if you will. 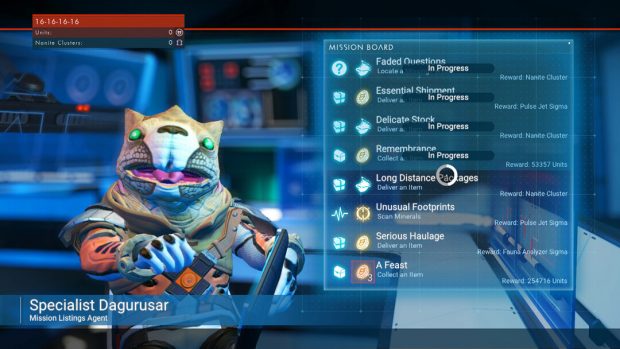 Digging a bit deeper into the info there are NPC guilds where you can improve your standing by completing missions (which is where terrain manipulation makes itself useful in uncovering buried bits for the salvage quests). There are more missions generally, actually, and across a variety of playstyles.

Trading and crafting now relate to variable economic factors tied to star systems - that one seems like an attempt to make that stuff more meaningful. There's more info on your info scanner interface visor thingummy. There's that terrain sculpting thing I've mentioned a few times which is via a multi-tool enhancement. The portals you find let you leap to new worlds or previously visited planets (you can do that with more efficiency by studying the glyphs, I think). Oh, and there are changes to space combat and another pass at low terrain flight improvements. It sounds like you can now crash into things which is good news for people who like that sort of thing and bad news for me who will end up landing in a tree by accident.

Here are the things I, Pip, am interested in:

1. The variety and visual quality of planetary biomes has been improved

2. Explore rare new exotic planet types as you journey toward the galactic core

3. Depth of field has been added as an option in photo mode, as well as NPC interactions

6. Improved generation of beaches along shorelines

7. Summon your ship from anywhere on a planet's surface using your quick menu 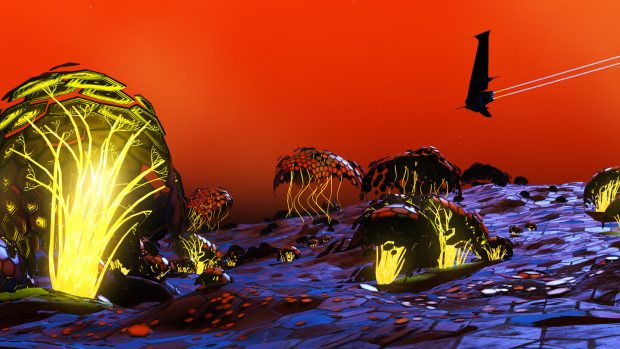 The full patch notes are here. My client hasn't updated so I'm assuming it's the notes which are live given some elements leaked earlier and the patch is to follow shortly.

My main observation is that at various points before launch the idea was that No Man's Sky was definitely not an MMO, or at least if it had MMO trappings it wasn't intended as an MMO. But with all of these changes and the guilds and the missions and the bases and the fledgling acknowledgement of other people via ghost voices(??) and hubs of activity and economic variables it sounds like it might actually end up as one.

Disclosure: Once upon a time Alec did some writing for No Man's Sky. I have no idea what he wrote but I hope it was Transformers fanfic.