Not content with tracing all the rays in Minecraft and lots of other big games like Call of Duty and Watch Dogs Legion this week, Nvidia also released a new GeForce Game Ready driver yesterday that promises up to 23% better performance in some of today's big multiplayer games, plus sharper pixels in retro games (see FTL: Faster Than Light running in 4K up the top there). Or at least it will if you've got yourself an Nvidia RTX or GTX 16-series card like our best graphics card champ the GTX 1660 Ti, because a lot of the driver's new benefits are all tied up with Nvidia's new Turing architecture, leaving older graphics card owners in a bit of a fuzz.

First, let's chat pretty pixels. You've probably never had a problem with this if you've got a 1080p gaming monitor, but if you've ever played a retro or pixel art game on a higher resolution screen, such as a 1440p monitor or a 4K TV, you may have found it doesn't look nearly as sharp. That's because games sometimes use a thing called upscaling to blow up lower res art in order to fit your high res screen, resulting in blurry edges and a fuzzy picture. Sometimes. Most modern pixel art games I've encountered recently have usually been pretty good with having their own high resolution assets available in their graphics options, but this isn't always the case for slightly older pixel games.

To help combat the aforementioned fuzz, Nvidia RTX and GTX 16-series card owners will now find an Integer Scaling option available in their Nvidia Control Panel's 'Adjust Desktop Size and Position' Display menu. It's still in beta at the moment, according to Nvidia, but it should help preserve that extra level of detail thanks to the hardware-accelerated scaling filters available inside Nvidia's Turing GPU that sits at the heart of their RTX and GTX 16-series family.

Fortunately, there's another new addition in Nvidia's Game Ready driver that should help do a similar thing in sharpening up images for everyone else. It's part of Nvidia FreeStyle overlay in their GeForce Experience app, which will now include a new Sharpen FreeStyle filter in their existing Detail filter. Here it is in action:

It will take a bit of a toll on your game's performance, but Nvidia promise that the performance impact is roughly half that of the previous sharpening filter. You can also choose your own level of sharpness, ranging from 0-100%, and apply it on a game-by-game basis - and in case you've forgotten, here are all the games that support Nvidia's FreeStyle app.

Next, let's talk performance boosts. It's not unusual for new drivers to bring small performance bumps to certain games, of course, but this time Nvidia's claiming you'll get up to 23% faster performance in Apex Legends playing at 1080p. Admittedly, they've only given us figures for their new crop of RTX Super cards, and the 23% result is only attained by the RTX 2080 Super. If you've got an RTX 2060 Super card, on the other hand, you're only looking at around a 15% performance boost, which isn't nearly as sexy. 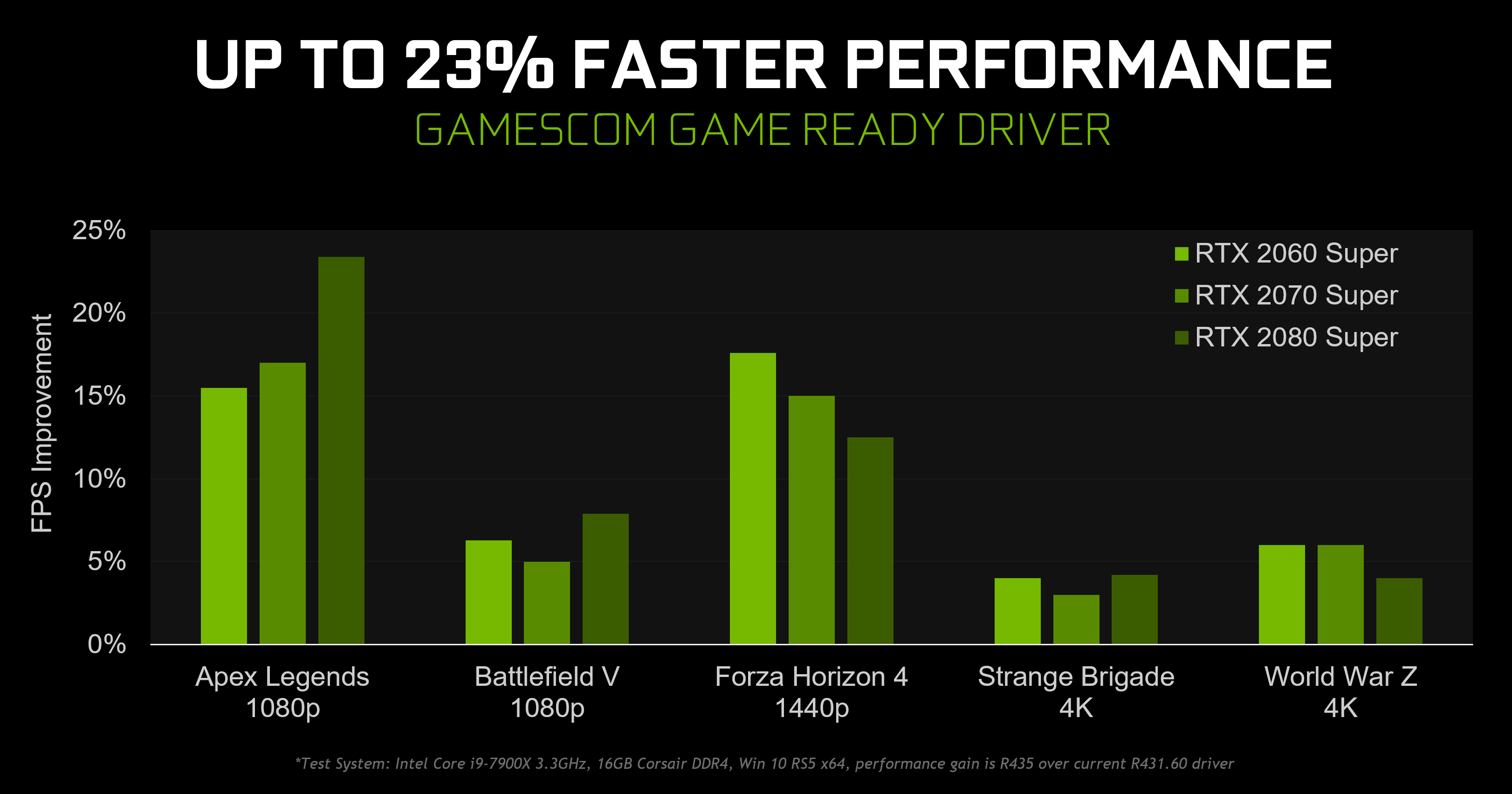 Forza Horizon 4 is a bit more promising, with the biggest performance bump belonging to the RTX 2060 Super instead of higher-end cards, but the other games in Nvidia's graph there are all below 10%, if not barely scraping 5%. It's also not clear whether you'll see similar performance gains on non-RTX graphics cards, as Nvidia haven't provided any graphs for those over on their website.

There's also a bunch of stuff about new, even lower latency times for even faster input responses from your mouse and keyboard etc (up to 33%!), but I think I've prattled on long enough about minute changes to your graphics card performance that you probably won't notice very much.

To download the driver, you can either get it here, or open up GeForce Experience, spend ten minutes remembering what log-in details you used that one time in the distant past and get it to update automatically through there. Enjoy!