Just when you thought there wouldn't be another opportunity to get one of Nvidia's new RTX cards this side of Christmas, another member of their RTX 30 series has arrived: the hotly anticipated RTX 3060 Ti. With prices starting at £369 / $399, this latest entry in Nvidia's next-gen RTX 30 family packs quite a punch for its price bracket, going toe to toe with the outgoing (and significantly more expensive) RTX 2080 Super across all resolutions, and offering significant gains over its immediate predecessors, the RTX 2060 and 2060 Super. It's arguably the RTX 30 card you've been waiting for all along, too. While not quite the same 4K powerhouse as the RTX 3070, the RTX 3060 Ti is a much more compelling option for gaming at 2560x1440, capable of hitting 60fps on max settings in almost every big game going today (a feat the RTX 2060 sometimes struggled with on the very top settings), and pretty darn close to that with ray tracing and DLSS switched on.

It's also a superb 1080p card, too, hitting well in excess of 60fps on max settings, and often pushing into the region of 70-90fps. With the RTX 3070 still rarer than hen's teeth and no immediately obvious Big Navi competitor from AMD on the horizon, the RTX 3060 Ti firmly succeeds the RTX 2060 and RX 5700 XT as my new graphics card of choice for mid-range PCs.

Of course, as you may have already guessed from the RTX 3060 Ti's name, there will likely be more than one RTX 3060 card arriving over the coming months - although quite when and for how much Nvidia aren't yet ready to say (edit: the RTX 3060 was announced at CES 2021 and is due in late February 2021). After all, their "Ti" moniker is normally reserved for the super-charged versions of a particular card, although whether we'll also see an RTX 3060 Super in the future as well as a vanilla 3060 is currently anyone's guess. In any case, the RTX 3060 Ti still makes a strong case for those after a flawless 60fps max settings 1440p GPU this year.

The Nvidia GeForce RTX 3060 Ti is the RTX 30-series GPU you've been waiting for, offering flawless, 60fps+ speeds at both 1440p and 1080p on max settings. It's the new go-to card for maxed out 1080p ray tracing, and it can achieve similar ray tracing performance at 1440p once DLSS is enabled. With no clear competition from AMD right now, the RTX 3060 Ti is the new best graphics card to buy for mid-range gaming PCs.

In the meantime, here's what we're dealing with in terms of specs. Like the RTX 3070 (and RTX 2060 Super before it), this graphics card has 8GB of GDDR6 memory to its name, which should be enough to get you through the ever-increasing VRAM demands of tomorrow's big games over the next couple of years, but it's worth bearing in mind that we've seen some titles such as Watch Dogs Legion butt up against that figure already on its very top graphics settings.

However, whereas the RTX 2060 Super had just 2176 CUDA cores under its belt, the RTX 3060 Ti more than doubles that to 4864 - just down from the RTX 3070's 5888 CUDA cores. It also has a slightly higher boost clock speed of 1665MHz compared to the RTX 2060 Super's 1650MHz, but it does also have a higher GPU power rating of 200W versus the Super's 175W as well. As a result, Nvidia have raised their power supply requirements for the RTX 3060 Ti to 600W this time round, rather than the 500W / 550W rating they recommended for their RTX 2060 predecessors. As a result, you may want to check your PSU's wattage beforehand to make sure you're not going to run into any potential bottlenecks.

I've been sent the RTX 3060 Ti Founders Edition for review, and much like the rest of Nvidia's RTX 30 Founders Edition cards, this one comes with one of their new 12-pin power connectors. Thankfully, there's an adapter in the box that fits onto the end of a single 8-pin connector, so you shouldn't have any trouble getting it up and running if you choose to go for one of these over a third-party card. Dimensions-wise, it's a little longer than the RTX 2060 Super Founders Edition, but I didn't have any problems fitting it inside my case - which isn't something that can be said for all of the third party RTX 3070 and RTX 3080 cards I've tested recently. In short, it's a much more practical entry in Nvidia's RTX 30 series family, and one that should slot quite easily into the vast majority of existing builds.

As for the RTX 3060 Ti's performance, this is a more than worthy upgrade for existing GTX 1060 owners, and heck, even GTX 1070 owners should see a substantial performance increase here, too, particularly if you've been struggling to hit 60fps on higher graphics settings at 1440p recently. 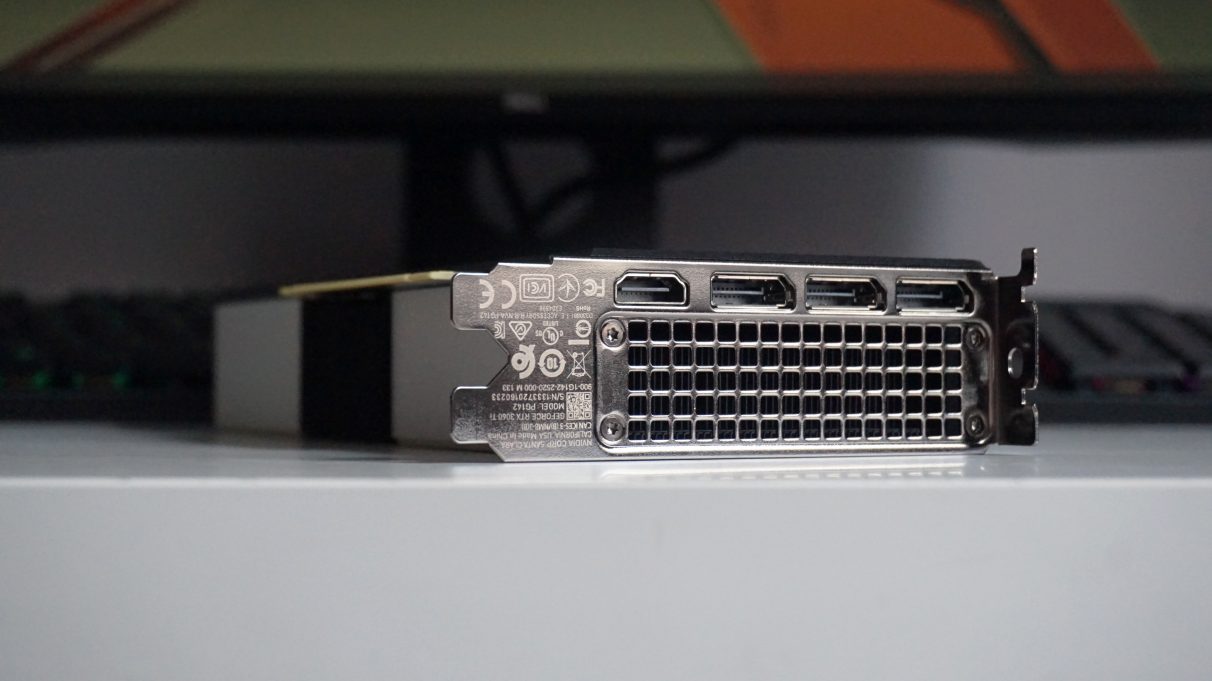 It also handled Metro Exodus beautifully, too, hitting a silky average of 83fps on Ultra at 1080p in its dedicated benchmarking tool (a feat the GTX 1070 couldn't even manage on Medium settings at 1080p), and an equally smooth average of 67fps on Ultra at 1440p - practically double what you'll get on the GTX 1070 with the same settings. I didn't need to deploy the game's DLSS support to bump up its ray tracing performance at 1080p, either, as the RTX 3060 Ti still managed an average of 65fps even with Ultra ray tracing enabled. You will need DLSS to hit similar speeds on Ultra at 1440p, mind (without it you're only looking at an average of 47fps with Ultra ray tracing versus 56fps with DLSS switched on), but that's true even of the RTX 3070.

It's a similar picture over in Shadow Of The Tomb Raider, too. Without ray tracing or DLSS switched on, the RTX 3060 Ti produced a wonderfully smooth average of 70fps on Highest at 1440p with its demanding SMAA x4 anti-aliasing setting enabled, as well as a massive average of 102fps when I knocked the resolution down to 1080p. It can manage the game's Ultra ray traced shadows quite easily at 1080p, averaging 64fps overall (which is just as well, really, as DLSS isn't supported at 1080p here), but it definitely needed a little assistance when I bumped the resolution back up to 1440p. Without DLSS, it averaged 42fps on Highest with Ultra ray tracing at 1440p, but switch on DLSS and you're back at that original 70fps average again.

To put some of those ray tracing figures into context, even AMD's new Radeon RX 6800 XT only managed an average of 56fps in Metro Exodus on Ultra with Ultra ray tracing at 1440p, which is the same as RTX 3060 Ti with DLSS switched on. That's quite the feat for a card that costs so much less. Heck, even the RX 6800 XT's Shadow Of The Tomb Raider result of 55fps on Highest with Ultra ray tracing at 1440p isn't quite as fast as the DLSS-enabled RTX 3060 Ti, which just goes to show what a difference DLSS makes to help level the playing field. AMD are working on a DLSS-style competitor at the moment, but they've yet to announce when it will be available. Until it's ready, the increasing number of ray tracing games with DLSS support only serve to make Nvidia's RTX 30 cards that much more appealing than their AMD rivals.

Back in the non-ray tracing arena, though, the RTX 3060 Ti continues to make a strong case as the go-to 1440p card going forward. While Total War: Three Kingdoms pushed it just below that all-important 60fps mark on Ultra settings at 1440p (averaging 59fps overall), it charged well out in front of it when I switched over to Monster Hunter: World, averaging a very slick 70fps on Highest at 1440p as I ran through its opening Ancient Forest environment. Both games saw average frame rates in the 90s at 1080p max settings, too, with Three Kingdoms coming in at 92fps and Monster Hunter an even more agreeable 101fps.

Again, compare that to the GTX 1060's modest averages of just 40fps and 43fps on max settings in Monster Hunter and Total War at 1080p (and barely playable 36fps and 28fps averages on max 1440p settings), and that's a substantial improvement on all counts.

The RTX 3060 Ti is a much more able companion for Final Fantasy XV's myriad of extra Nvidia effects, too. At 1080p, the RTX 3060 Ti kept a steady average of 65fps on the hills of Duscae with everything dialled up on Highest, and it even managed a (just about) playable average of 46fps on Highest at 1440p with all the settings switched on, too. Not ideal, sure, but I still saw a very agreeable average of 51fps with just TurfEffects and Hairworks enabled on Highest at 1440p, which simply isn't possible on the GTX 1070.

Heck, the GTX 1070 can barely manage 30fps on Highest at 1440p by itself, let alone adding any of the extra Nvidia settings to the mix, which is once again more than twice as slow as what the RTX 3060 Ti can do on similar settings. Without any extra effects switched on, for example, Noctis and pals positively glided up and down Duscae's lush and verdant hillsides, averaging 69fps overall. 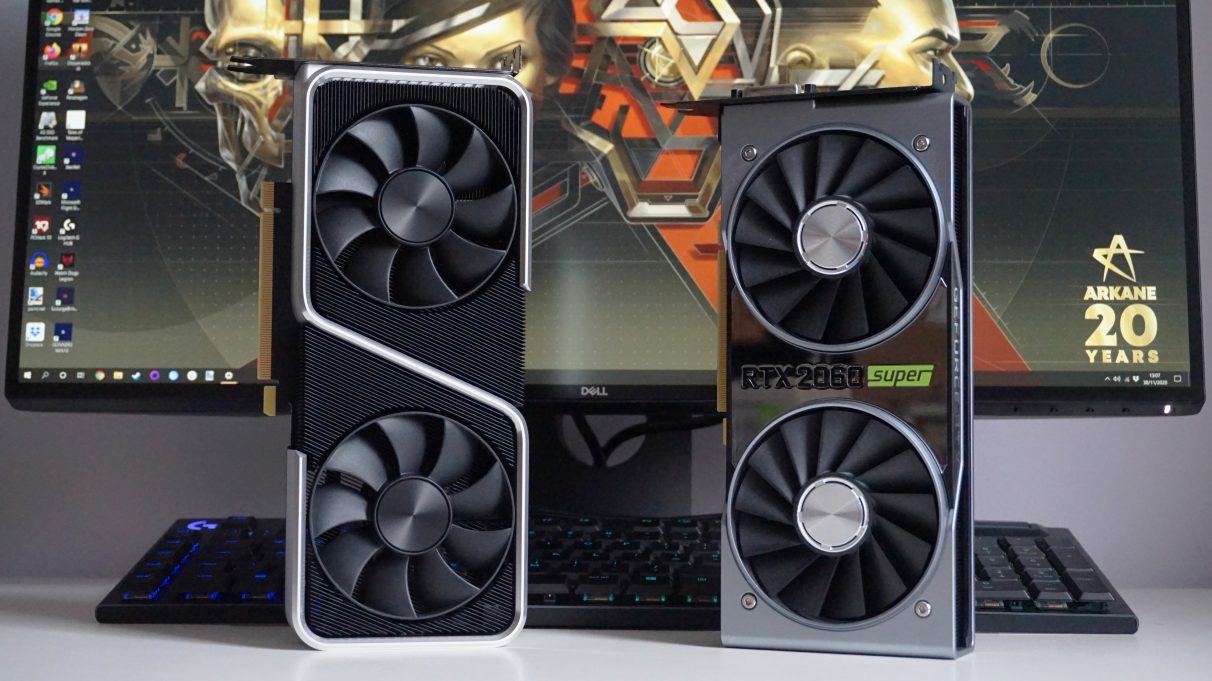 Older games such as The Witcher III receive a substantial boost, too, making them ripe for any future ray tracing updates. For example, when the RTX 3060 Ti can already manage an average of 113fps on Ultra at 1080p and 87fps on Ultra at 1440p riding around the forests of White Orchard today, then it should be more than capable of still hitting 60fps when CD Projekt Red eventually add in their upcoming ray tracing support for it - although I will, naturally, be testing this thoroughly in much more detail whenever it arrives.

For now, though, the Nvidia GeForce RTX 3060 Ti is a more than worthy upgrade for existing GTX 1060 and GTX 1070 owners, and it sets a new standard for 1440p gaming in its price range. It quite capably beats everything AMD's existing Radeon RX 5700 XT has to throw at it, and when you add in all the extra bits you get with it, from ray tracing and DLSS to Nvidia's increasingly sophisticated Broadcast suite for budding streamers and the like, there's simply no competition right now.

I'm sure AMD will have an inevitable RX 6700 XT lined up to take on the RTX 3060 Ti at some point in the next year (hopefully, maybe, once graphics card prices and stock levels come back under control a bit), but even then it's likely to be a tough proposition if they don't also get their DLSS rival out in time as well. Until then, the RTX 3060 Ti is going to be a tough act to beat when it goes on sale at 2pm GMT tomorrow, December 2nd, and is my new best graphics card pick for playing games at 2560x1440.