Nvidia's next-generation of RTX graphics cards is almost here. Based on their new Ampere GPU architecture, the RTX 3070, RTX 3080 and their Titan-class RTX 3090 GPUs are arriving later this month and into October. Now that the dust has settled a bit since their initial unveiling on September 1st, I've now updated our RTX 3000 series hub with new images, extra info and additional news stories that have come out over the last couple of days. If you missed the launch or just need a handy refresher, here's everything you need to know about their specs, price and release dates, as well as how they stack up to Nvidia's current RTX cards, both in terms of design and overall performance.

I'll be testing all three RTX 3000 series GPUs very soon to see exactly how they compare to their RTX 20 predecessors, but in the meantime, here are the key takeaways from Nvidia's RTX 3000 launch on September 1st.

Nvidia's RTX 3000 series GPUs will have a staggered release schedule over the coming months, with the RTX 3080 launching first on September 17th. That's just a couple of weeks away.

The RTX 3090 will then follow on September 24th, while the RTX 3070 will come later sometime in October. Nvidia didn't specify an exact date for the RTX 3070 during their GeForce presentation, but I'll update this article with more information as soon as it's confirmed.

All RTX 3000 cards will come with a free copy of Watch Dogs Legions and a year's subscription to GeForce Now if you buy one between September 17th and October 29th. However, it's currently unknown how much stock will be available at launch. Nvidia's website currently isn't accepting pre-orders for the Founders Editions of their respective cards, and industry sources suggest that the RTX 3080 and the rest of the RTX 3000 family could be in short supply until the end of the year.

As a result, the availability of these cards could be much lower than previous Nvidia launches. This may well push up prices depending on how much demand there is for these GPUs, but I'll update this article with more information as soon as we know more.

At the moment, Nvidia's official pricing for the Founders Editions of their RTX 3000 series is as follows. The most expensive Ampere GPU card is going to be the RTX 3090, which is set to cost £1399 / $1499 when it launches at the end of September.

As for third party cards from other manufacturers such as Asus, MSI, Gigabyte, Zotac, Palit, EVGA and others, these will likely be the same or more expensive than the Nvidia Founders Editions of these cards depending on how much they've been factory overclocked. The only confirmed pricing I've had through so far is for Asus' TUF Gaming RTX 3080 and RTX 3090 cards, which are set to cost an identical £649 and £1399 respectively as Nvidia's Founders Editions.

Overclockers UK have also listed lots of RTX 3070, RTX 3080 and RTX 3090 cards on their website, but there are currently no prices or pre-order options. I'll update this section with more information as soon as I have it.

Nvidia's RTX 3000 series are based on their new Ampere GPU architecture, and they involve a number of firsts when it comes to specs. They're the first Nvidia GPUs to be based on Samsung's 8nm manufacturing process, and they're also the first graphics cards in the world to make use of Micron's new super fast GDDR6X memory standard. Not all RTX 3000 series cards will have GDDR6X memory, mind (the RTX 3070 will only have regular GDDR6 memory like the existing RTX 20-series), but the ones that do will be able to deliver a system bandwidth of up to 1TB per second, which is massive.

The RTX 3000 series also has second generation ray tracing cores to improve their ray tracing capabilities, as well as third generation Tensor Cores for faster DLSS support performance. The number of confirmed ray tracing and DLSS games is still pretty small at the moment, but this should start to improve once the Xbox Series X and PS5 launch at the end of the year, as these consoles will also have ray tracing support.

Nvidia haven't released a full set of specs for their RTX 3070, RTX 3080 and RTX 3090 cards just yet, but you'll find the key bits of information summarised in the table below.

The RTX 3000 series will also support PCIe Gen 4, and will have HDMI 2.1a and DisplayPort 1.4a display outputs so they're ready for 4K and 8K displays. They're also the first graphics cards with AV1 codec support, which will be good news for streamers, as this uses significantly less bandwidth than previous standards.

One of the most striking aspects of Nvidia's RTX 3000 series is their dual axial fan design, confirming those earlier rumours that showed the RTX 3080 with fans on either side of the graphics card rather just one. This allows up to 55% more airflow than their previous fan design, according to Nvidia, and is up to 3x quieter and 30% more efficient than their previous generation of graphics cards.

They all have quite different designs, though, so here is what the Nvidia Founders Editions of the RTX 3070, 3080 and 3090 look like in the flesh (click to enlarge):

Each fan is independently controlled, too, with the front fans pulling air through its heatpipe and expelling it out of your PC case's rear system fan, while the rear fans expels air out of the ports bracket. Here's how it's meant to work in practice: 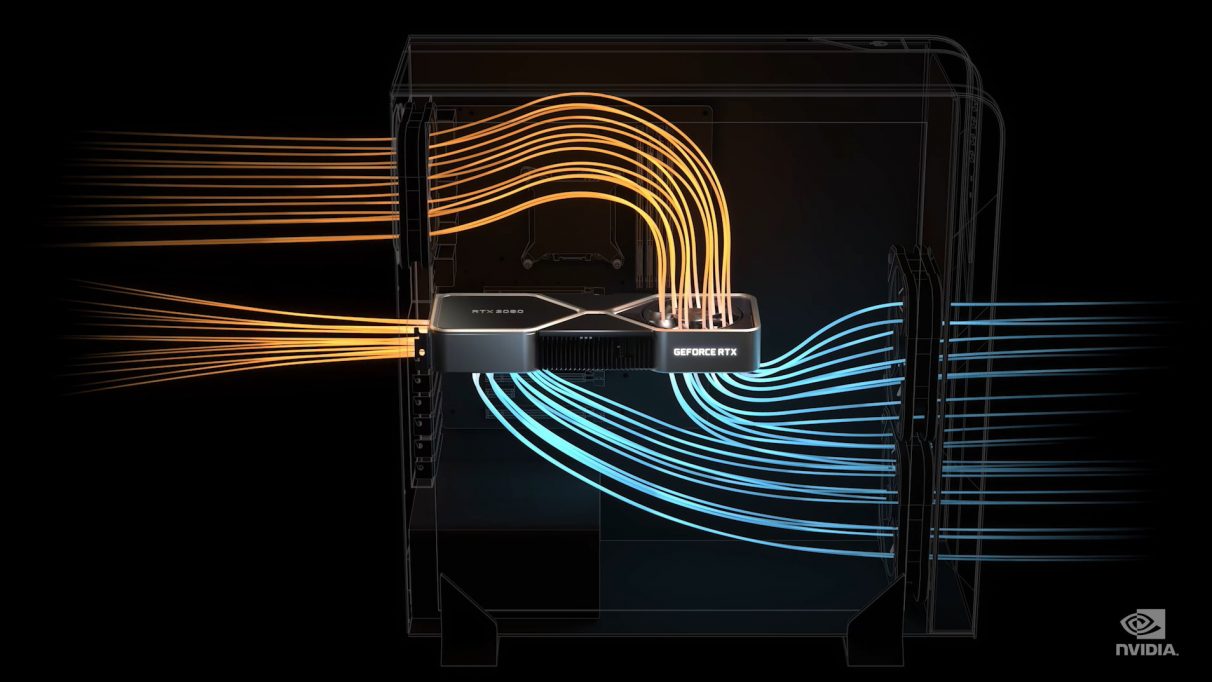 However, it's since come to light that only the Nvidia Founders Editions will have the dual axial fan design, as images of the third party cards that have been released so far look like they'll adopt a more traditional single-sided fan design. Third party RTX 3000 cards are still being announced at the moment, so it's possible we might see more dual axial designs released over the coming weeks, but right now we haven't seen hide nor hair of them.

It also looks like Nvidia's Founders Editions of the RTX 3070, 3080 and 3090 will also be the only versions that have a 12-pin power connector, too, which you can see in the image below. Nvidia created this new power connector in order to accommodate those extra fans, so they had to shrink the size of their traditional 8-pin connectors in order for their new design to work.

Nvidia will be including 8-pin adapters the boxes of their RTX 3000 cards so you can carry on using your existing power supply with the RTX 3070, 3080 and 3090, too. The RTX 3090 and RTX 3080 will come with two supplementary PCIe 8-pin connector adapters, while the RTX 3070 will come with one. However, images of third party cards suggest that, once again, the 12-pin connector won't be making an appearance on other types of RTX 3000 card. Instead, they will use a traditional 8-pin connector.

I will be testing the RTX 3070, 3080 and 3090 over the coming weeks to bring you full and in-depth reviews of their individual performance chops, but in the meantime, here's what Nvidia have said about how they stack up to their older RTX 20 cards. During Nvidia's RTX 3000 launch presentation, they used this graph to show off where the RTX 3070 and RTX 3080 sit in relation to their previous generations of high-end graphics cards.

If true, that's quite the bump in performance. Part of this is down to the performance improvements brought on by Nvidia's new Ampere GPU architecture. The main figure Nvidia have highlighted so far is that Ampere's performance per watt has increased by up to 1.9x over Turing, allowing the RTX 3000 series to achieve higher frame rates with the same amount of graphics power.

It's also down to Nvidia's second gen ray tracing cores and third gen Tensor cores. Both of these have double the amount of throughput compared to their Turing-based RTX 20 predecessors, which allows each card to do everything much faster than before. At the moment, Nvidia claim these enhancements will accelerate ray tracing performance by up to 2x.

Admittedly, it's a little harder to unpick exactly how much of an improvement we're going to see generation on generation, as so far Nvidia have only provided figures that included their performance-boosting DLSS tech switched on as well (and even then their graphs were a little unclear in terms of specific figures). Naturally, I'll be going testing all the available ray tracing games with a fine tooth comb once review samples of each card are available, so watch this space for some real-world performance figures.

Those are the headline facts for Nvidia's RTX 3070, RTX 3080 and RTX 3090 Ampere GPUs at the moment, but as always I'll be updating this article with more information as and when I get it. In the meantime, you can read all about our current favourite graphics cards right here, as well as find all the best graphics card prices in our regularly updated graphics card deals hub.