We've already seen how the new Nvidia GeForce GTX 1650 compares to its most immediate predecessor, the GTX 1050 Ti (have a read of our GTX 1650 vs 1050 Ti article for the complete skinny), but have you ever wondered how it stacks up to today's most popular graphics card, Nvidia's 6GB GTX 1060?

Well, wonder no more, as I've put both cards head to head to find out which one can lay claim to the pointiest average frame rate graphs. How much difference does that extra 2GB of memory add to the equation? Let's find out.

Just like before, I’ve run each card through my general games benchmarking suite at 1920×1080 and 2560×1440 resolutions to see how they perform across different graphics quality settings. The idea is to see what it takes to get a decent 60fps in each game, and how far each card is able to stretch itself before things get too choppy for comfort.

The games in question are Assassin’s Creed Odyssey, Shadow of the Tomb Raider, Total War: Warhammer II, Monster Hunter: World, Final Fantasy XV (with Nvidia’s fancy HairWorks, TurfEffects, VXAO and ShadowLibs effects turned off), Forza Horizon 4, The Witcher III and Metro Exodus (albeit only on Medium settings because neither card can handle its benchmarking tool on anything more strenuous).

Today, I’ve got the Zotac GeForce GTX 1650 OC and Asus' GeForce GTX 1060 6GB 9Gbps Edition. The latter, I should note, isn't actually available to buy any more, but when it was available, it was one of the fastest GTX 1060 cards you could buy. As a result, these GTX 1060 speeds are probably among the best you can expect to see from this particular type of card. The Zotac, on the other hand, is at the lower end of the GTX 1650 price spectrum, making it more of a baseline experience than anything else.

Starting with each card's Ultra performance, you can see below that in most cases there's a clear 10-15fps gap between the two cards at 1920x1080, giving the GTX 1060 a significant lead over its 16-series cousin. Admittedly, the GTX 1650 was never intended to be an Ultra quality card at this resolution, but the difference is pretty stark. While the GTX 1650 is stumbling around the low 30s in a lot of games, the GTX 1060's general stomping ground is much higher up in the region of 50fps, often see-sawing either side of it depending on the game in question. 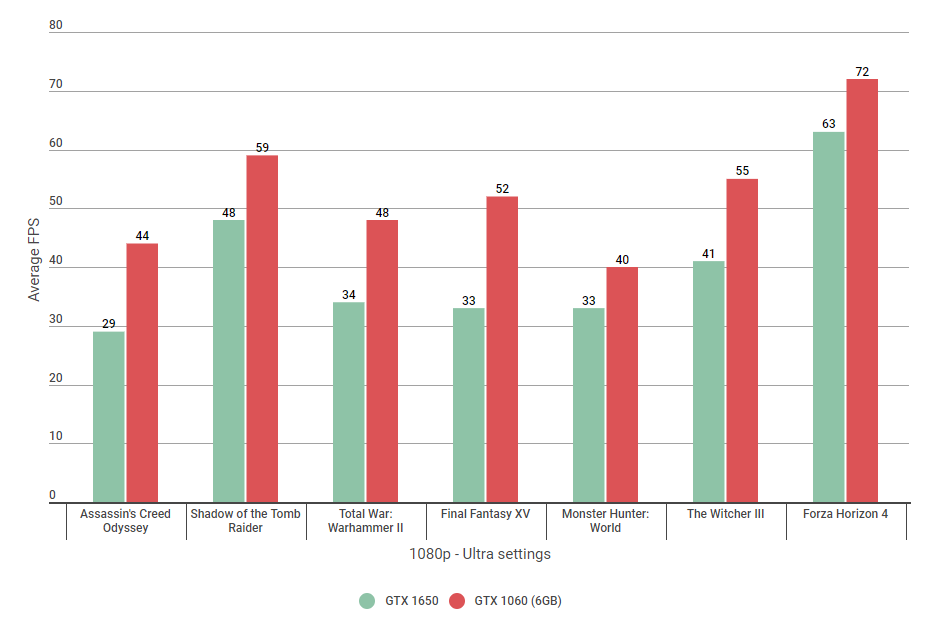 Indeed, the only games the GTX 1650 can really handle with any degree of competence on Ultra quality settings is Forza Horizon 4 and, to a lesser extent, Shadow of the Tomb Raider (albeit only with its basic SMAA anti-aliasing option enabled). Otherwise, it's getting dangerously close to the wrong side of 30fps here, with the biggest casualty being Assassin's Creed Odyssey, which averaged just 29fps overall in its internal benchmarking tool.

Fortunately, both cards are much more comfortable on High quality settings, which are outlined below. While the GTX 1650 still isn't hitting a consistent average of 60fps here, it's jolly well doing a much better job of it here than it was on Ultra. Indeed, you'd have to be a real nick-pick not to enjoy an average of 55fps in Shadow of the Tomb Raider here, as well as 53fps in Assassin's Creed Odyssey and 54fps in The Witcher III. 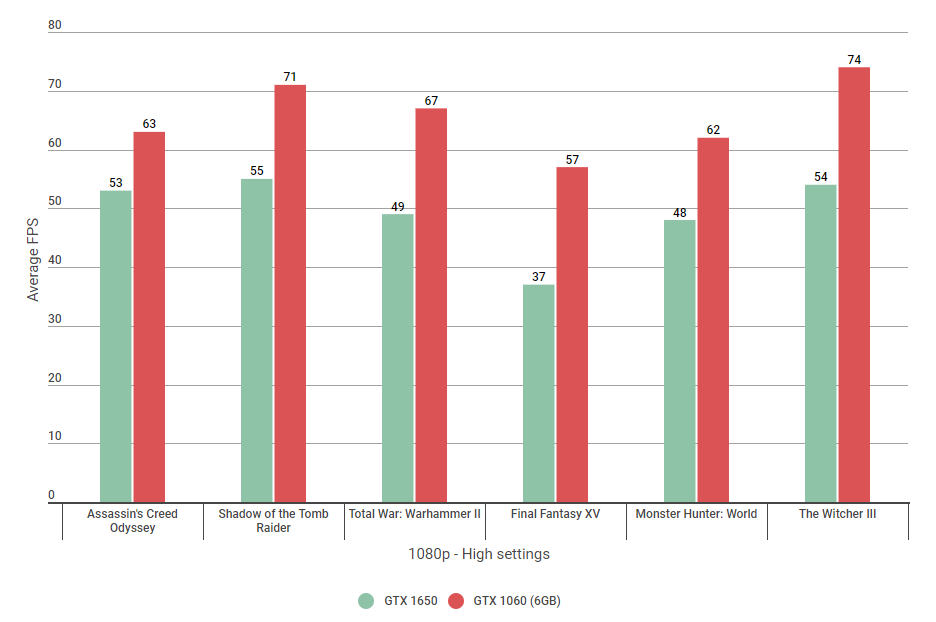 That said, there are still some games where the GTX 1650 falls a bit short on High, which makes the GTX 1060's 60fps+ speeds all the more enticing here, particularly when it comes to running Final Fantasy XV. This game remains one of the GTX 1650's biggest hurdles at this resolution, and it struggled to get much beyond an average of 45fps even when I lowered the quality down to Medium (or Average, in the game's parlance).

As you can see below, while the GTX 1650 is just about pushing into 60fps territory here, the GTX 1060 is able to go even further, offering average speeds of around 70fps that would be much more suitable for a high refresh rate monitor. It's also able to make a better stab at Metro Exodus as well, which the GTX 1650 struggles with by comparison. 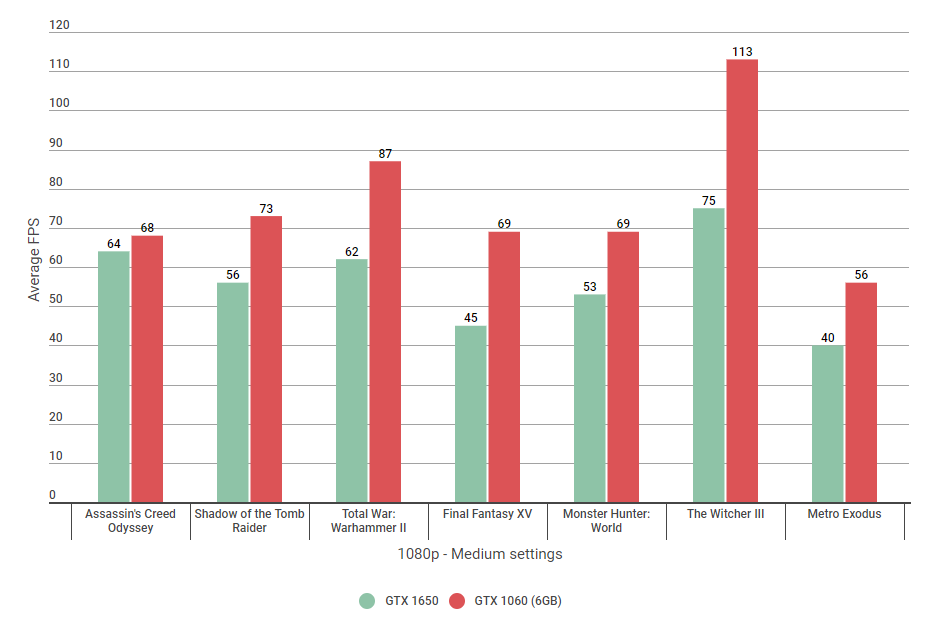 Still, if you don't have a high refresh rate monitor and just have a regular 60Hz one, then it's unlikely you'll see a huge amount of difference between the two cards here - apart from, that is, in Final Fantasy XV and Metro Exodus. Everywhere else, you're either getting a consistent 60fps with the GTX 1650, or are pretty damn close to it.

The same, however, cannot be said for their Medium performance at 2560x1440. Not that that's particularly surprising, really, given the GTX 1650 is really only intended to be a card for 1080p gaming, but I thought I'd include this graph anyway because it is just about capable of doing a bit of 1440p if you're not so fussed about the frame rate. 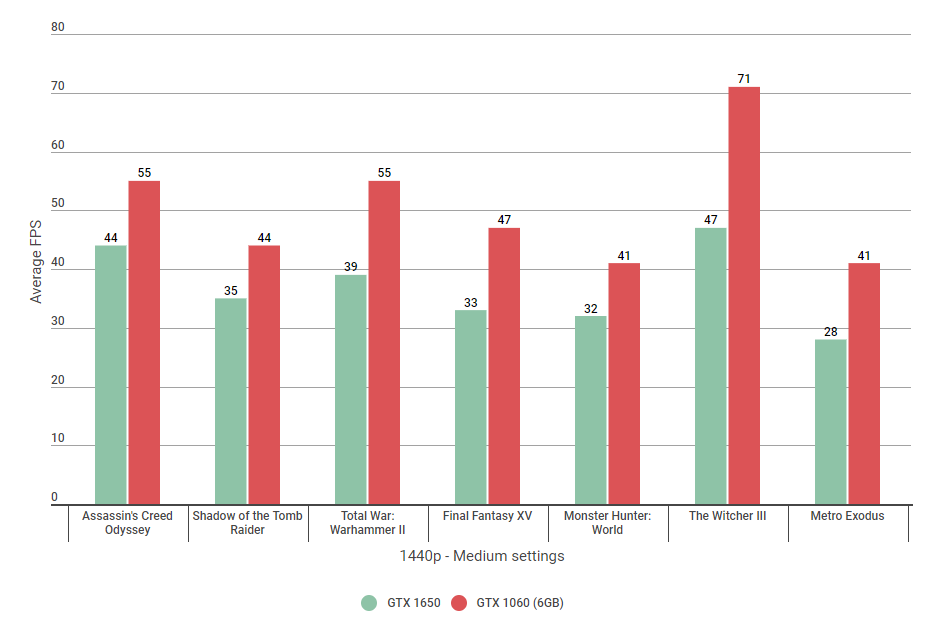 Here, however, you're looking at a similar kind of performance gap to our 1080p Ultra results, with the GTX 1060 often around 10fps in front of its newer sibling. The GTX 1060 still isn't completely perfect on Medium at 1440p, not by a long shot. But it's definitely able to offer a smoother gaming experience here than the GTX 1650, which once again is hovering around the 30fps mark.

Again, some people won't have any problem with that whatsoever, and GTX 1650 cards with higher boost clock speeds than the Zotac may even be able to nudge those average speeds a couple of frames higher, too. However, the GTX 1060 still has the GTX 1650 beat at this resolution, making it once again the superior card overall.

No surprises here, then. The GTX 1060 is still a better graphics card than the GTX 1650. Still, while I was never expecting the GTX 1650 to really come out on top here, these results will hopefully be of some comfort to current GTX 1060 owners who might be worried they're getting left behind by Nvidia's new generation of Turing-based GTX 16-series GPUs. Rest assured, the GTX 1060 is still a fine graphics cards in its own right.

Indeed, as we saw in my GTX 1660 vs 1060 comparison piece, the GTX 1060 can even hold its own against Nvidia's new GTX 1660 card as well. The GTX 1660 may be a tad faster overall, but unless you're itching to get a high refresh rate monitor and make use of all those 60fps+ frames, then there's no real need to get rid of your GTX 1060 card just yet - that is, unless you're thinking about upgrading to our best graphics card champ, the GTX 1660 Ti, which I reckon probably does offer a decent leg-up in the old frame rate department, especially if you're after something for better 1440p gaming. If you fall into that camp, then you should have a read of our GTX 1660 Ti vs 1060 article for more details.