Ever since it came out all those years ago, Nvidia's GeForce GTX 1060 has been one of the go-to graphics cards of this generation. Capable of superb frame rates at 1080p and 1440p alike, there's no wonder it's become one of the most popular GPUs on the planet. Now, however, the Nvidia GeForce GTX 1660 Ti has arrived, and by golly it's a corker. In fact, it's just gone straight in as one of the best graphics cards you can buy today. But just how much faster is the GTX 1660 Ti vs the GTX 1060? Well, that's what I'm here to find out through the power of graphs. Let's hop to it, shall we?

Paired with my Intel Core i5-8600K CPU and 16GB of Corsair Vengeance 2133MHz RAM, I've seen what each card can do on max settings at each resolution and taken an average frame rate (either from their own built-in benchmarks or from my own repeated manual gameplay tests) to see how they stack up against each other.

The cards in question are the Asus' ROG Strix GeForce GTX 1660 Ti OC and the 6GB Asus GeForce GTX 1060 OC 9Gbps Edition. Now I should note, this particular GTX 1060 isn't actually available to buy any more, but it's the only one I have to hand. The good news, though, is that when it was available, it was one of the faster GTX 1060s out there, so it should still give us a pretty good idea about what the absolute base case scenario is compared to the GTX 1660 Ti.

That said, Asus' ROG Strix OC card is also one of the more expensive and faster GTX 1660 Ti cards out there as well, so the results below should also be taken as a kind of best case type deal for what you can get on a GTX 1660 Ti. I'm pretty confident that you'll be able to apply most of the results below to the cheaper GTX 1660 Ti cards out there as well, though, as my early tests with Asus' £260 Phoenix GTX 1660 Ti were only an average of 2-5fps behind the ROG Strix OC - and in most cases it was more like 2-3fps. As a result, I reckon you can safely apply all the figures I talk about below to nearly all the GTX 1660 Tis out there, regardless of how much they cost.

Now we've got the methodology out of the way, let us gaze upon some lovely graphs.

With games getting more demanding by the year, the GTX 1060 has slowly started to lose its foothold as the best graphics card for playing games at 60fps on Ultra settings at 1080p, and nowhere is this more prevalent than on the games I've tested above. Don't get me wrong - 45-55fps is still perfectly playable in my eyes, but when the GTX 1660 Ti glides in with an effortless average of 56fps minimum, it starts to make the GTX 1060 look very old hat indeed. 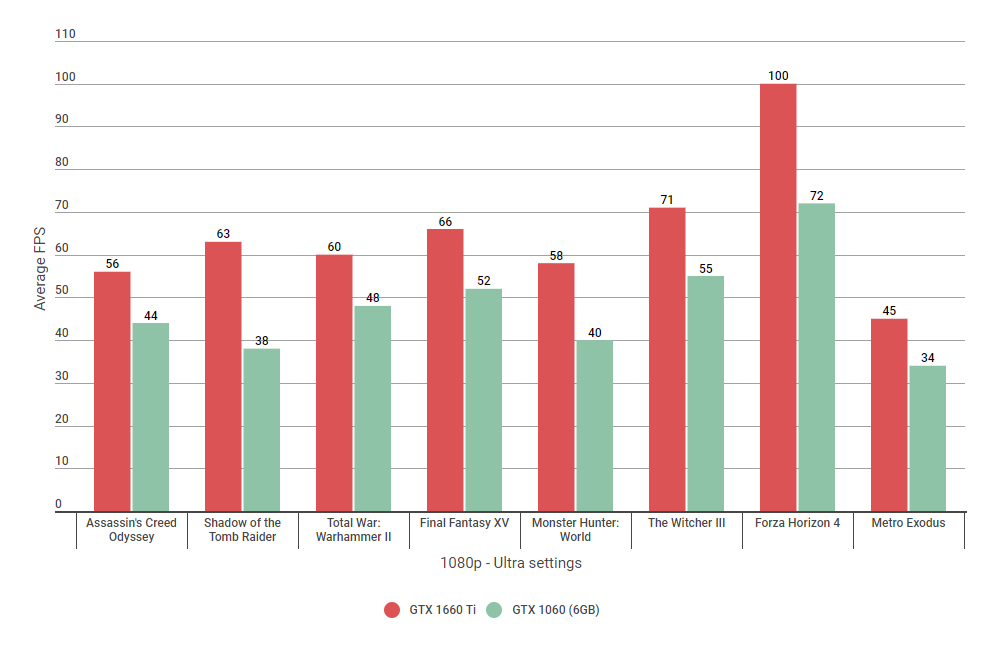 Indeed, with a boost of at least 10fps, if not closer to 15fps in a lot of cases, the GTX 1660 Ti is quite the step up over the 6GB GTX 1060, turning some of today's toughest games (aside from Metro Exodus, that is) from sort-of-playable-but-slightly-creaking adventures into buttery smooth delights.

That said, as evidenced by the GTX 1060's still excellent average of 55fps in The Witcher III, Nvidia's outgoing 1080p champ is probably still more than enough if your game library has a slightly older vintage than the latest and greatest. Indeed, unless you've got a 1920x1080 with a high refresh rate, then you probably won't see any benefit on the GTX 1660 Ti at all in these sorts of games, as your monitor will only ever be able to display 60fps - which the GTX 1060 is probably capable of doing already.

However, if you are one of those people whose PC is starting to feel like it's falling apart on some of these newer games, then the GTX 1660 Ti is absolutely the way to go if you want the bestest best speeds at the bestest best settings.

Speaking of which, if you're wondering why the GTX 1060's Shadow of the Tomb Raider result looks a little low, that's because I've got the full SMAA x4 anti-aliasing option enabled here, rather than something a bit more manageable like regular SMAA. You can still get frame rates around the 60fps mark with said regular SMAA setting on the GTX 1060, truth be told, but what I really wanted to highlight here was how much more capable the GTX 1660 Ti is when the game's really piling on the pressure. And by way of comparison, running the game with SMAA on the GTX 1660 Ti will get you frame rates in the 80-90fps region.

Of course, it's still perfectly possible to get a decent 60fps on High with the 6GB GTX 1060 at this resolution, which for most people will be absolutely fine - especially when it costs a good £60 less than the GTX 1660 Ti in the UK right now. However, when the GTX 1660 Ti can hit speeds in the 70-90fps region at this resolution, you're not only better future-proofed for when games start to get even tougher, but you've also got more scope to enjoy higher refresh rates if you decide to upgrade your monitor further down the line as well. That's why the GTX 1660 Ti is my new best graphics card of choice for 1080p resolutions, while the GTX 1060 (and RX 580) have been relegated to 'What you should actually buy' status if you're looking to save some cash and aren't that fussy about playing games at the best graphics settings.

Where the GTX 1660 Ti really starts to make a name for itself is at 2560x1440. As you can see from the graph below, a lot of games are barely playable on the GTX 1060 on Ultra settings at this resolution, with titles like Assassin's Creed Odyssey, Monster Hunter: World and Metro Exodus all in the stuttering mid-20s, and The Witcher III, Final Fantasy XV and Total War: Warhammer II in the dangerous mid-30s zone. 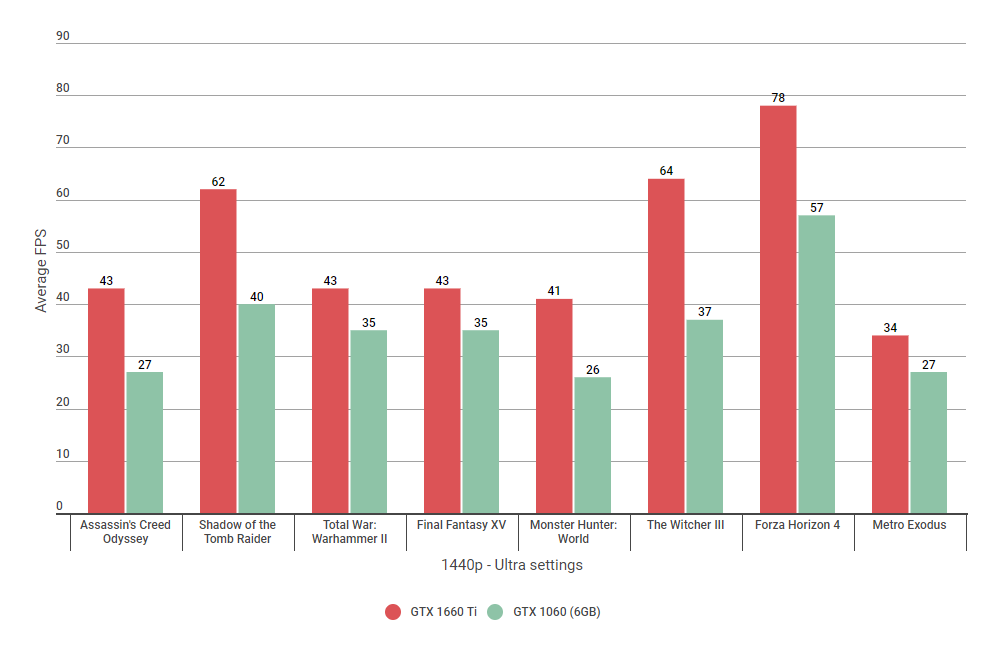 Admittedly, it's not like the GTX 1660 Ti is hitting a consistent 60fps here, either, with half the games on test hovering around the 40-45fps mark. But as I said in my GTX 1660 Ti vs RTX 2060 comparison piece, the 30-40fps region is definitely the point at which a small bump in numbers can make a surprisingly big difference to overall smoothness, transforming a game that's teetering on the wrong side of 30fps into something a lot more manageable.

I'd happily take 43fps in Final Fantasy XV, for example, if it meant being able to play it at its Highest detail setting at 1440p (sans Nvidia effects, mind), and I'd probably also hazard Monster Hunter: World on 40fps as well just so I can gaze at its fabulous dino costumes in greater detail.

Of course, you'll get much better results on both cards by dropping things down to High. Here, the GTX 1660 Ti really comes into its own, hitting near-60fps in practically everything going (except Metro, because everything struggles with Metro's insane benchmarking settings, more details of which can be found in my Metro Exodus graphics performance marathon). 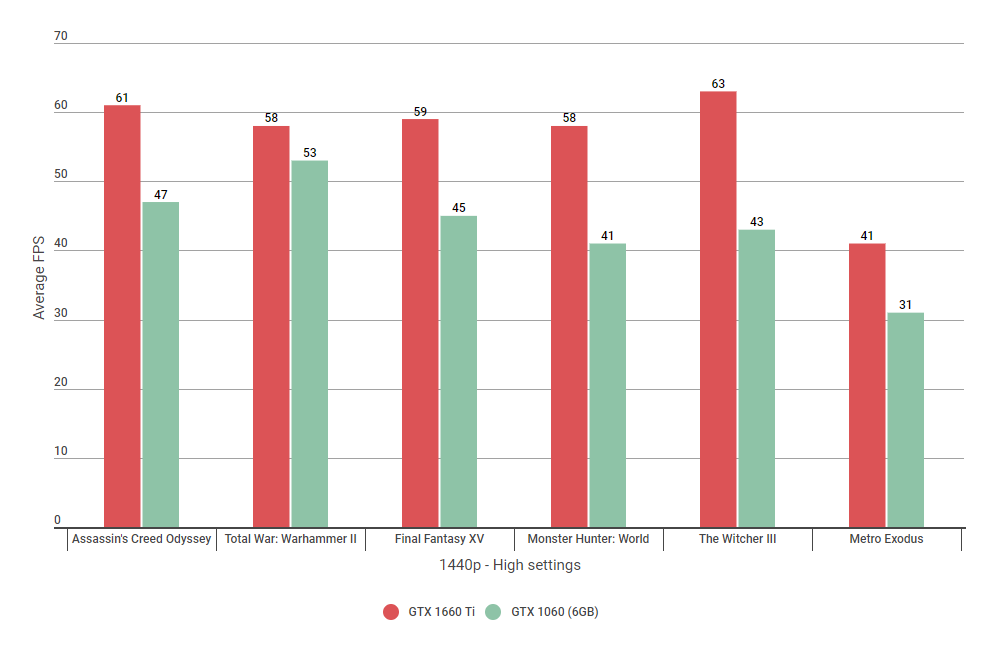 I've excluded Forza Horizon 4 here, as both cards could already hit 60fps back on Ultra at this resolution, and I've also missed off Shadow of the Tomb Raider because a) the GTX 1660 Ti can already do 60fps on Highest (with regular SMAA enabled, as per the graph above), and b) because you'd have to settle for Low on the GTX 1060 before you got the same kind of speed with just regular SMAA enabled and I didn't want it to get all embarrassed.

As I said above, the GTX 1060's 40-50fps results here are still perfectly playable at this resolution. But a smooth 60fps on High here is a pretty mean feat for a graphics card that only costs £260 / $279, especially when a lot of GTX 1060s in the US are still going for $250 in the US right now. This makes the GTX 1660 Ti such an easy recommendation for anyone looking to buy a new graphics card right now - especially if you're in the US, because why settle for 60fps on Medium at 1440p when you can have the same speed on High for practically the same money?

It's a slightly tougher sell in the UK, where 6GB GTX 1060 prices are still as low as £200 at time of writing, as for me that's still enough of a price gap to make the GTX 1060 worth considering as a budget option for those looking to keep costs as low as possible. Personally, I'd urge you to stretch to £260 if you possibly can, but I understand that not everyone has enough money to do that.

As a result, if you're looking to spend as little as possible and aren't that fussed about having the latest and greatest graphics settings, then I reckon you'll still be perfectly happy opting for a 6GB GTX 1060 if a) you're in the UK, and b) are mainly looking to play games at 1920x1080.

If you're aiming for 2560x1440, however, then I'd strongly recommend finding room in your budget for the GTX 1660 Ti, as you'll not only get a heck of a lot more out of it at this resolution, but it will also stand you in much better stead as games get increasingly more demanding down the line.