When I started studying art history in college, I was riding on the high of seeing the Philadelphia Museum of Art for the first time when I was 16. Voraciously digging deeper into the art world and personalities surrounding the glamorous and revered works of 20th century art that I had seen there, I encountered the figure of Peggy Guggenheim. I immediately wanted to be her, a savvy collector and curator of important surrealist and abstract expressionist art who created a culture of reception for these works and did it with style, mingling with the icons of Modernism across Europe.

It wasn’t until I was well into grad school that I found out that she inherited over 2 million dollars (equivalent to something like 30 million today) upon turning 19, which was almost certainly the determining factor in being able to do any of the above. I still hold some affection for her - her autobiography is a wild ride - but now, as an emerging curator newly armed with a degree and a thesis on displaying videogames, I’ve had to adjust my freshman year goals and expectations, to put it lightly. So maybe the free-to-play massively multiplayer gallery simulator Occupy White Walls is for someone like me?

Videogames that involve exhibiting or appreciating art in any significant way are very rare, though they do exist, such as those by Ignatz Höch and Pedro Paiva, so I was excited to give this one a try. Even so, I was surprised by a recent statistic that only 17% of the videogames shown at E3 this year were primarily “nonviolent,” where the fundamental mechanic of the game was not “the ability to fight and kill”. While there have always been videogames imagining alternative desires or goals, the power fantasy videogames overwhelmingly tend to offer is, well, based on the most obvious definition of “power.” 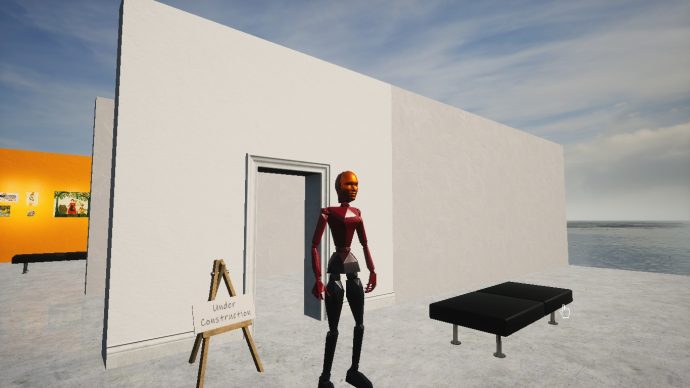 But isn’t having an insane amount of money and being able to buy whatever art you want and house it in a beautiful gallery a type of power fantasy too? In real life, fulfilment of this desire plays out in typically grotesque ways within capitalism. The Sackler family has been in the spotlight for accusations that they are “artwashing” their role in profiting off the opioid epidemic by funding new gallery wings and arts research. Recently, the chief executive of the Serpentine Gallery (which, of course, has a named Sackler building) resigned, warning that these sort of critiques are potentially eroding philanthropic support for the arts. She was questioned on her significant holdings in a company specializing in spyware technologies that have been used by governments to target human rights activists.

Occupy White Walls removes much of this friction that becomes a dark cloud hanging over all art exhibitions if you think about it too much. What if the pristine, white-walled gallery or imposing historical building was not a place where submissively appreciating the generosity and taste of the wealthy (and never mind where they got that wealth) was the implicit cost of entry, but a place anyone could feel a bit of ownership over? I made an account and found out how London-based studio StikiPixels imagines such a world. 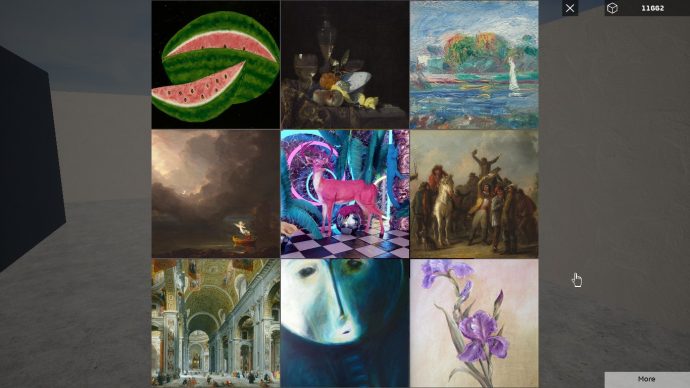 After a brief tutorial of how to move around and zoom in on artworks, I was transported to my own gallery space, charmingly still strewn with paint buckets and only half-built. I felt like the further tips I received were meant to nudge me in the direction of cleaning up the space and placing the rest of the walls, which I dutifully began to fashion in the typical “white cube” style, leaving one vibrant yellow accent wall behind the front desk. While obviously less laborious than prying open paint cans or constructing walls in real life, this did begin to give me a sense of ownership over the space. Then I could get down to the business of purchasing art, which is initiated by opening the DAISY AI.

The DAISY AI element is unique approach to get people to start seeing themselves as an art collector and developing their own taste. It presumably analyses what paintings you collect, zoom in on, and so on, and finds similar ones you would also be interested in. I admit I was a bit put off by the initial Instagram-like interface, where all of the artworks are presented as a grid of equally sized square thumbnails, and clicking shows you the full piece. It has the inevitable effect that most social media interfaces do, flattening a variety of things, topics, aesthetics and so on into neighbouring boxes of bite-sized “content.” This led to me later being surprised by how small many of the drawings I purchased looked in the space, and, especially since you are manipulating a character to look at artworks rather than looking at the artworks yourself (until I get a VR headset, at least), could lead to a perception that bigger simply works better for artworks. 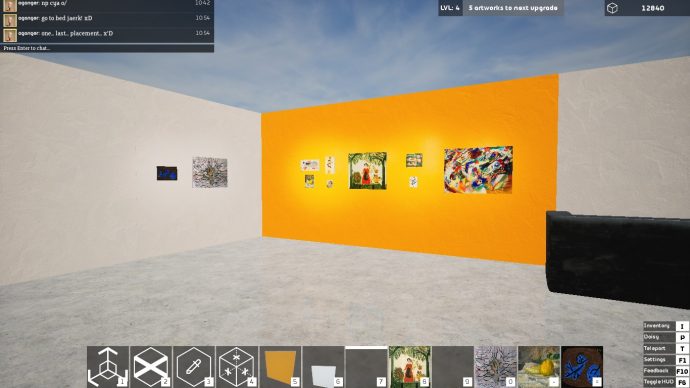 However, I was also pleasantly surprised by some of the suggestions the system sent me, quickly cluing into my love of colourful abstraction on the one hand, and 19th century American folk art on the other. When you click on a painting of interest in the thumbnail grid, you get to further explore a high-detail shot of the artwork with additional information about size, country of origin and date, plus an occasional in-depth description, not unlike the information presented on a museum object label. Unlike at most museums, though, there’s also a scrolling section of user comments about the artwork.

Some are sweet, commenting on what they like about the work or just stating that they think it is beautiful or amazing. Others relate the work to their own lives and experiences, or try to decode what the figures represented are doing or feeling. When I clicked on a lovely folk art painting of a little girl in a dress surrounded by plants and animals, one comment read: “perfect for the first art representing a country unable of developing a culture”. Harsh! 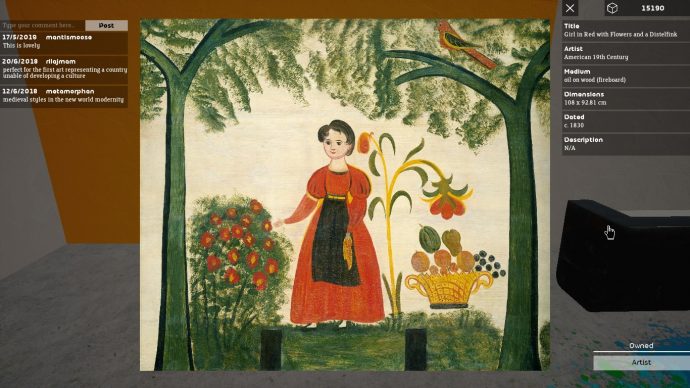 Even though the comments would sometimes dump on art that I was eager to put in my own gallery, it was still interesting to me to see people commenting on art in a new context. The public museum is not a place for the public to unconditionally engage with artworks, but instead it encourages or enforces particular standards of behaviour, and deferral to the expert knowledge held by historians and curators. While I sometimes overhear people expressing their opinions as strongly when I’m at an art gallery, it’s rare, and it’s intriguing to me that the format of Occupy White Walls creates space for people to respond to art in a whole spectrum of ways, from heartfelt to off-the-cuff, which don’t typically appear in museum interpretation.

Dipping my toe into an Art MMO for the first time only got me as far as hanging a small selection of my favourite paintings and drawings on the back wall of my gallery, but I’m excited to gradually do more and see how Occupy White Walls expands from here. The variety of paintings and drawings, as well as the sculptural and architectural works available, can already be overwhelming, but I found myself wondering how forms of more complex, participatory and multipart work, such as performances, new media installations and videogames themselves, could also be represented in this context. While I may not yet have my dream of a small gallery space for displaying a mishmash of videogames and more traditional art forms in real life, Occupy White Walls may eventually offer a good place to practice.