Oxygen Not Included mods, it turns out, can tell you a lot about the game itself, and how phenomenal it already is. Most of the really good mods out there opt for the "making life better" route, rather than the "tonnes of new features" route like the mods of most other games. It's a testament to the brilliance of Klei and their endlessly enjoyable suffocation simulator.

But even so, I rarely play without the below Oxygen Not Included mods. This is a game I come back to time after time, and so I've spent years pouring over what new nuggets of excellence the modding community has brought out. These 12 mods are the very best ONI mods of all, and if you're looking to make your time micromanaging dupes so they don't drown in your water supply even more enjoyable, you've come to the right place!

When it comes to the very best Oxygen Not Included mods, there are three names in particular that really keep cropping up. These three prolific modders are the titans of the ONI Steam Workshop, and their names are (in no order) Ony, Swistak, and Cairath. Each has their own collection of modpacks that you can find by following the links of any of their mods below, so I'd advise you check those out too, because they're really quite fantastic.

But the entire ONI community has such a wealth of great ideas, well-implemented fixes and tweaks, and just generally brilliant Oxygen Not Included mods. It was tough to narrow it down to just 12, but I think the below mods are really the must-haves. Feel free to click on any of the links below to skip ahead to a particular ONI mod! 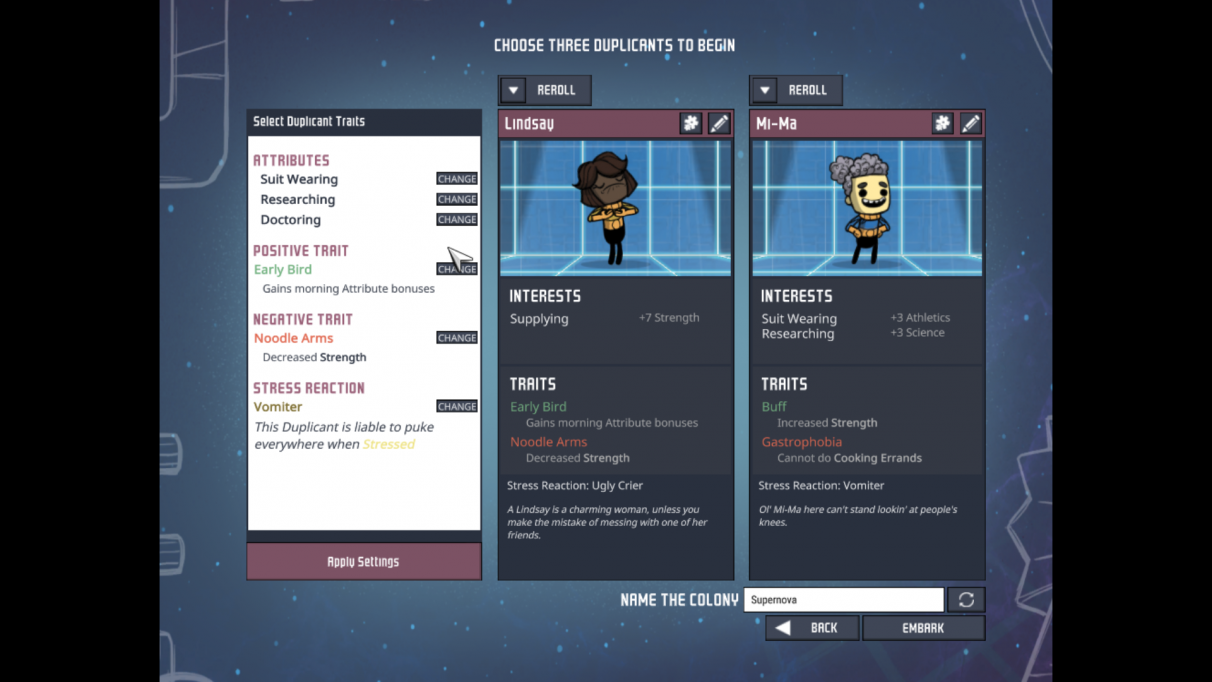 DGSM is a true must-have ONI mod for those who spend half an hour on the dupe selection screen before starting a new game. Oxygen Not Included's equivalent of the uber-popular Prepare Carefully mod for Rimworld, DGSM allows you to click on a little cog icon next to each dupe's name and customise their attributes, traits, and stress reactions with ease. It also comes with a great selection of customisation options in the Mods menu, including the ability to customise dupes in the same way mid-game when they arrive via the Printing Pod.

Another top-tier mod from Ony (and the first of hers I ever used), Favorite Resources greatly improves the player's experience with the resources tab in-game by allowing you to mark any material you like, from Algae to Copper Ore to Meal Lice, as favourites. Then you can close the resources tab, and your favourites will appear in a nice condensed list below, giving you all the information you really need with none of the visual clutter of the vanilla resources tab. There is no reason at all not to subscribe to this mod right now.

Favorite Buildings is the final Ony mod on this list - I've gotta let the other modders have their chance too, y'know! - and, much like Favorite Resources, it offers a way of greatly increasing the user-friendliness of Oxygen Not Included and its UI by allowing you to assign custom keybinds for any structure in the game. So instead of having to actually find in the build menu and click on ladders, for instance, you could simply hit "1" or whatever keybind you like, and you'll instantly have a ladder in your hand ready to place. Why, oh why is this not a part of vanilla Oxygen Not Included?

If you've ever played Factorio, you'll know just how essential blueprints are for saving time and maintaining your sanity. And seeing as Oxygen Not Included also often requires you to spend lots of time planning and piecing together intricate combinations of structures, it's amazing to me that Klei haven't yet added a similar feature. But Mayall comes to the rescue with this Blueprints mod, which allows you to save a particular area of structures as a blueprint which you can then place wherever else in the world you like, however many times you like.

If you get any mod on this entire list, make it GasOverlay. I'm flabbergasted that this mod even needs to exist. When you go into the vanilla ONI gas overlay, everything is broken up into different stages of what the game considers "breathable" or "unbreathable" - except it doesn't differentiate at all between different gases. So you could look at the overlay and see that your base is "very breathable", and not realise that you're looking at heavily Polluted Oxygen rather than clean Oxygen! Swistak's GasOverlay mod solves this problem very neatly by changing the Gas Overlay so it represents each gas type as a different colour, and the stronger the colour, the higher the concentration. It works perfectly, and it's an absolute must-have mod for any serious ONI player in my opinion.

Now come on - if you're gonna sit there and tell me that you've never had a Dupe somehow bypass your rows of Sinks or Wash Basins and smear toilet water all over your base, then I'm going to sit here and call you a liar. The right honorable Stephen lends a helping hand in this regard with the Queue for Sinks mod, which, quite simply, forces dupes who need to wash their hands to wait until a Sink (or equivalent) is free before using it, instead of just going "oh no! There's no Sink free! I'd better call off this whole hygiene endeavour!" and walking on by. A real life-saver, this one.

Swistak's second mod in this list is another wonderful quality of life mod that allows you to drag around pretty much every element of the UI to wherever you want on the screen independently. Even if all you want to do is condense everything together in their respective corners a little bit more so the whole UI is a little less cluttered, this mod will enable you to do this with ease.

Cairath is the third big name in ONI mods, and with must-haves like Bigger Camera Zoom Out, it's clear why. If you've ever enabled Sandbox Mode in an ONI world, you may - like me - have been shocked by just how far you can suddenly zoom the camera out. Why on earth can you not do this in a normal game, you ask? Good question, and one that no longer needs an answer, because Bigger Camera Zoom Out allows you to zoom the camera out ludicrously far in a normal game of Oxygen Not Included, so you can take in your Cycle 1000 mega-base in a single screen. 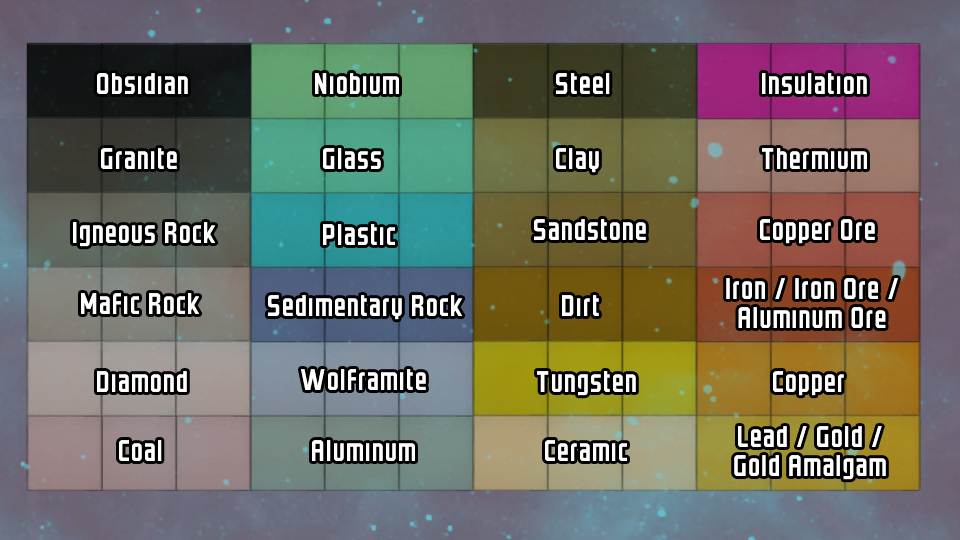 If you've ever looked about your Oxygen Not Included colony and wished there were a way to just spruce it up a little bit more, than Cairath's also got you covered here! Wallpaper is a lovely and simple mod that allows you to paste wallpaper in the background of tiles, for decorative purposes or whatever other reason you have. The colour of the wallpaper depends on the resource you use to build it, so there's a great variety of colours to choose from - though of course some will be more expensive than others...

Swistak is back with the ChainedDeconstruction mod, a real time-saver of a mod for the many ONI players who frequently adopt the practice of spamming ladders in rows or columns to allow dupes access to new areas. Not only is this an ungainly sight in your base, it's also very bad for Oxygen Not Included's performance, because it confuses the dupe pathfinding system. ChainedDeconstruction makes all this a lot easier to deal with by making it so that you only need to deconstruct a single piece of the interconnected series of ladders or firepoles or tubes in order to bring the whole lot cascading down at once. Like I said, a colossal time-saver.

For such a technical building game, Oxygen Not Included really needs some sort of planning overlay. It doesn't need to be complex - just an overlay where, like in Rimworld, you can drag and draw boxes and lines just to get an idea of what it is you want to make and how. Well, until that happens, Cairath once again provides us with an excellent, fit-for-purpose mod called Plan Buildings Without Materials. It's a compromise between what we have and what we should have, allowing you to place down structures even when you don't have the materials required. So you can place down everything ahead of time, which helps a tonne with planning out your base, no matter how far into the game you are.

Finally, we end on an unassuming mod called Custom World Size, which - yup, you guessed it - allows you to customise the width and height of your asteroid. This is something I always loved about others games such as Factorio - typically you've given an endless world, but forcing yourself to work in constraints such as a really long thin world forces you to play differently and make some interesting planning and expansion choices. This mod does exactly the same thing for Oxygen Not Included - and of course if you're not interested in limiting yourself, you can go the other way and create a super-mega-ultra-huge asteroid for yourself! Just make sure your PC can handle it though! 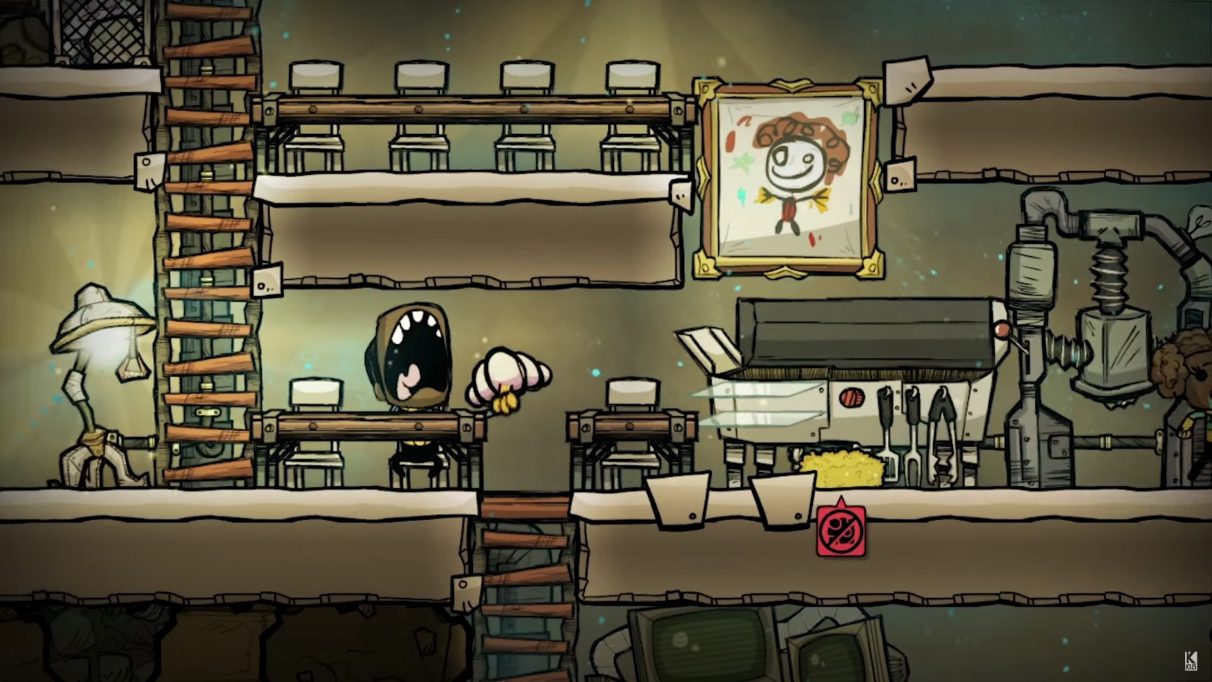 Alright, that should be enough Oxygen Not Included mods to be getting on with. You don't want to overload your game with too many mods for fear of incompatibility or performance issues. But the above 12 mods are the best that the community currently has to offer! Let us know in the comments which are your favourites!