Imagine a world without electricity. Horrible. What would we use to blend our smoothies? How would we know when uncle Derek hits the metal bit again in the Sunday game of Operation? Electricity has roughly one dozen uses, and yet it is in the realm of videogames when we see its most fantastical and offensive capabilities brought screaming to life. To celebrate the important role of sassy electrons in your otherwise mundane life of neutrons and - ugh - protons, here are the 8 most shocking uses of electricity in games. 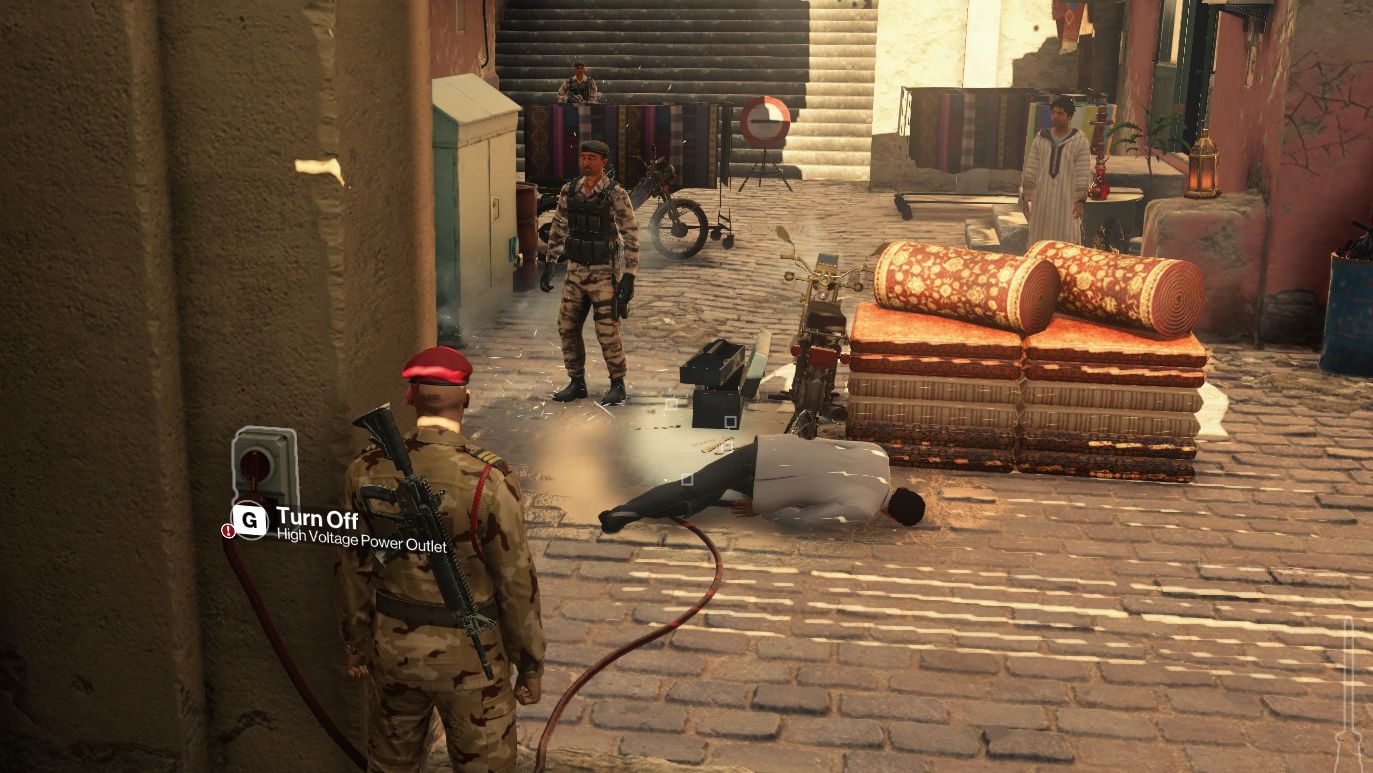 Bald fashion icon and Michelin Star murderer Agent 47 does a lot to earn his salary. He is so ‘strictly business’ he carries his rifles in a briefcase. But he is a creative man at heart. He can kill a man with a dead fish, or an exploding golf ball. Ian Hitman is an innovator, a disruptor. If professional murders were encouraged on Instagram in the same way as, say, loaves of artisan bread, he would post filtered photographs of finely arranged cadavers and write “#freshlydead” in the caption. One of his finest and simplest recipes calls for an electricity generator, a loose wire, and a puddle of water. Distract your target towards the puddle, turn on your generator and adjust to 1000 volts. Cook until murdered. If you wish, you can repeat this process using the newly cooked corpse as the distraction for the next corpse-to-be, manifesting in a comical cycle of de-lifing everyone who comes to see what all the fuss is about. Playing peekaboo in the resultant pile of corpses like a no-haired psychopath is optional.

Catch on, grandad, nobody aims their own gun anymore. Winston, the big talking gorilla from Overwatch, and possible tax dodger, knows how to fight like a modern primate. With a big electricity cannon that fires enough bolts of arcing electric pain to fry anyone standing vaguely nearby, no precision aiming required. This fizzling ‘leccy effect looks like somebody took the cool plasma globe your friend Benjy got for his eighth birthday, and put it on the end of a leafblower. It is a sight glorious enough to make Nikola Tesla cry with joy. Tesla, famously, did not enjoy shooters. “You need to be very quick,” he said. “I tried Counterstrike and it is too hard.” 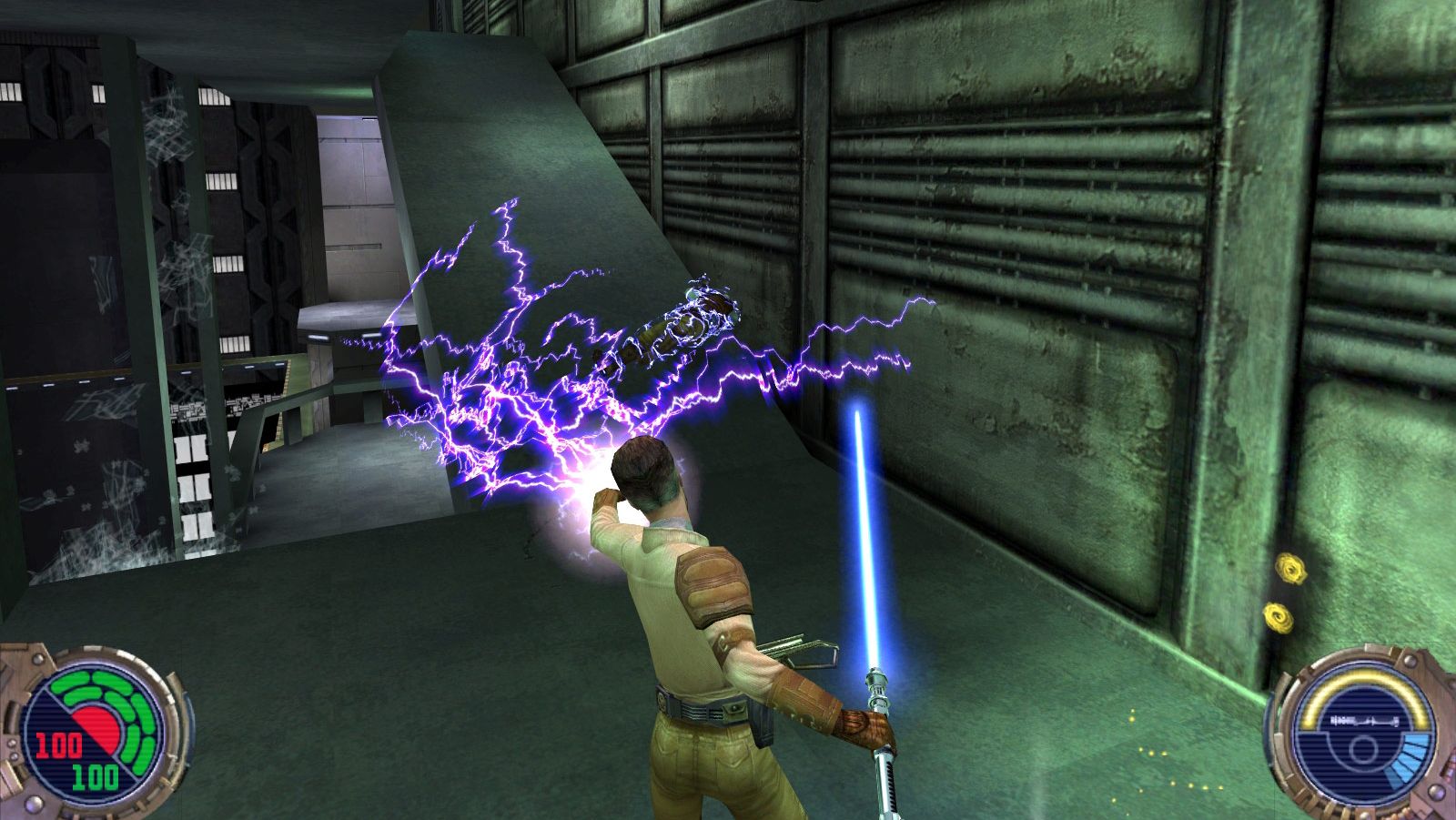 Long before the newest Star Wars movie reduced the bright bolts of Sithlectric to a Palpatinian hand-me-down, like some sort of rare genetic disorder, force lightning was a power open to any and all space Buddhists who put their twisted minds to it. That includes Jedi monkboys like noted dismemberment enthusiast Kyle Katan, hero of lightsaber ‘em up Jedi Knight II. For him, force lightning had to be attained the old-fashioned way. What happens, you see, is you stretch out your hand, and then you reach deep inside your soul, deeper than any meditative trance has ever taken you, to the profound recesses of all primordial sensation, until, listen, can you hear it, the inner-distant chimes of hidden meaning and spiritual grace, the lost essence of life, flowing like a rivulet of ancient, ornate music. Wait, is that…? 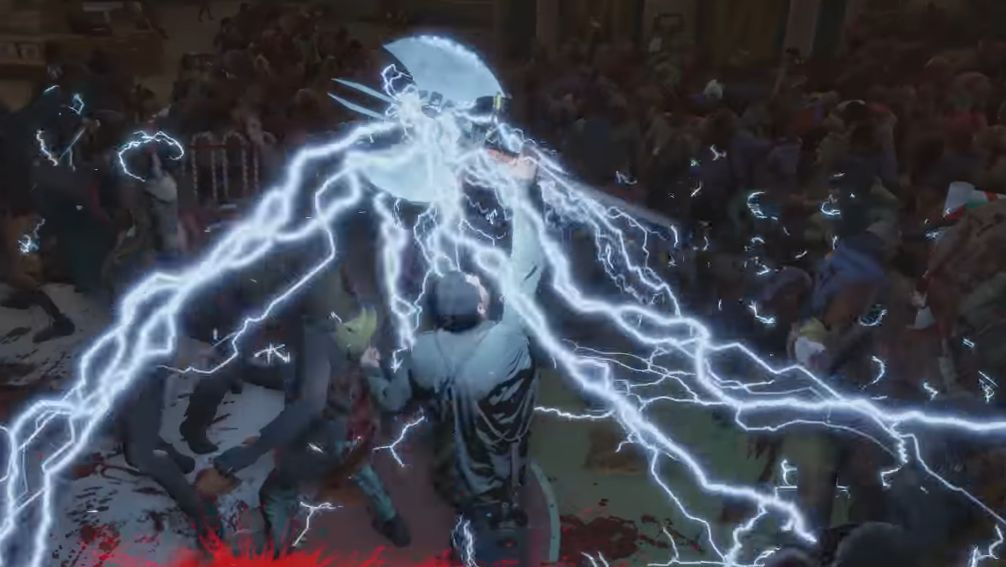 This is just Thor’s hammer from the Marvel movies, but an axe. It is shocking because it is theft.

Top Gunnists and various fans of airborne war-doing got a proper treat last year with this anime-charged advertisement for human-piloted death machines. An underappreciated action beauty. Part of its dogfighting charm is thanks to the wacky variety of its missions. Yes, they are all about taking a monstrously expensive tin can for a joyride in the sky, but each mission has its gimmick. Sandstorms, canyon runs, big mommy droneships. But no gimmick is as spectacular and unnerving as the thunderstorm level, which sees you dodging big fat lightning strikes as well as missiles and machinegun fire. And when you are hit by one of these big bad bolty boys, your plane goes all fuzzy-wuzzy and takes a pained dip like a tall man bumping his head on a doorframe. Electrifying stuff. 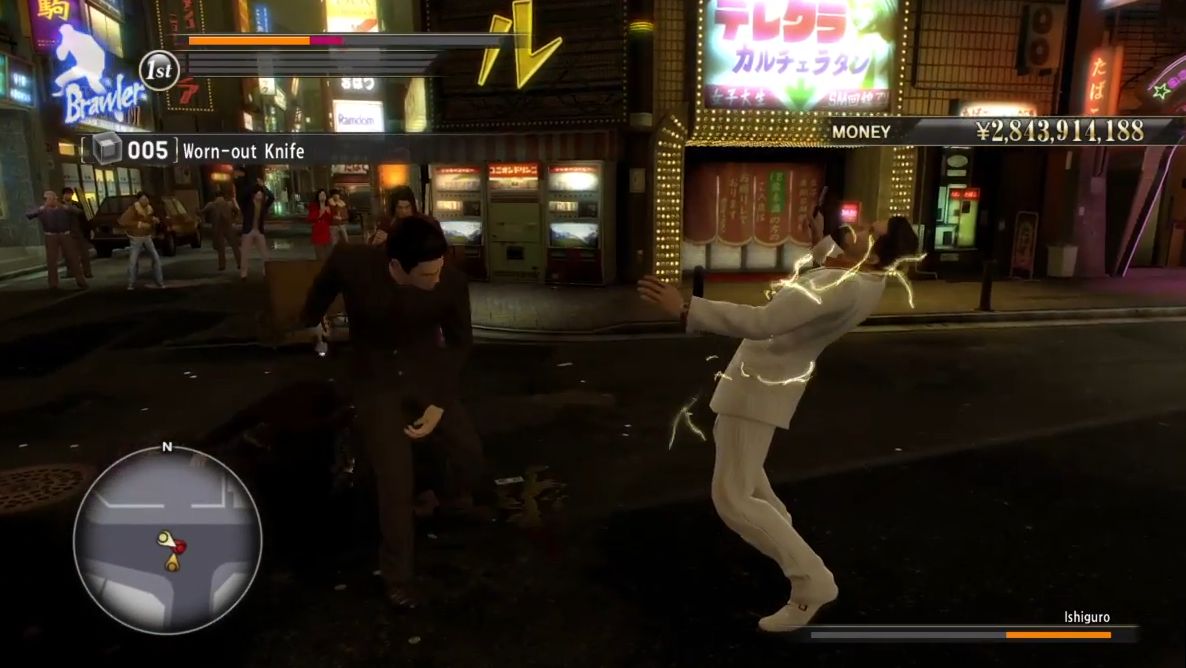 The fury of lip-splitting punchdad Kiryu Kazama cannot be contained, thwarted, or escaped. But it can be postponed. All you need is the sneakiness of a rodent and this innocuous device. So many combos have been interrupted because of this hateful block of electronics. Enemy mobsters stick it in your back when you’re not looking, zapping you and laying you out cold for a few seconds of nuisance button-tapping. If I was Head Gang Man of Tokyo, I would make carrying this disdainful machine punishable by pinky-chop. It is repugnant. It has the design sensibility of a 90s cellphone, and the aura of a cursed object. I will smash a bicycle over the head of any man who carries this shameful weapon. Get out. 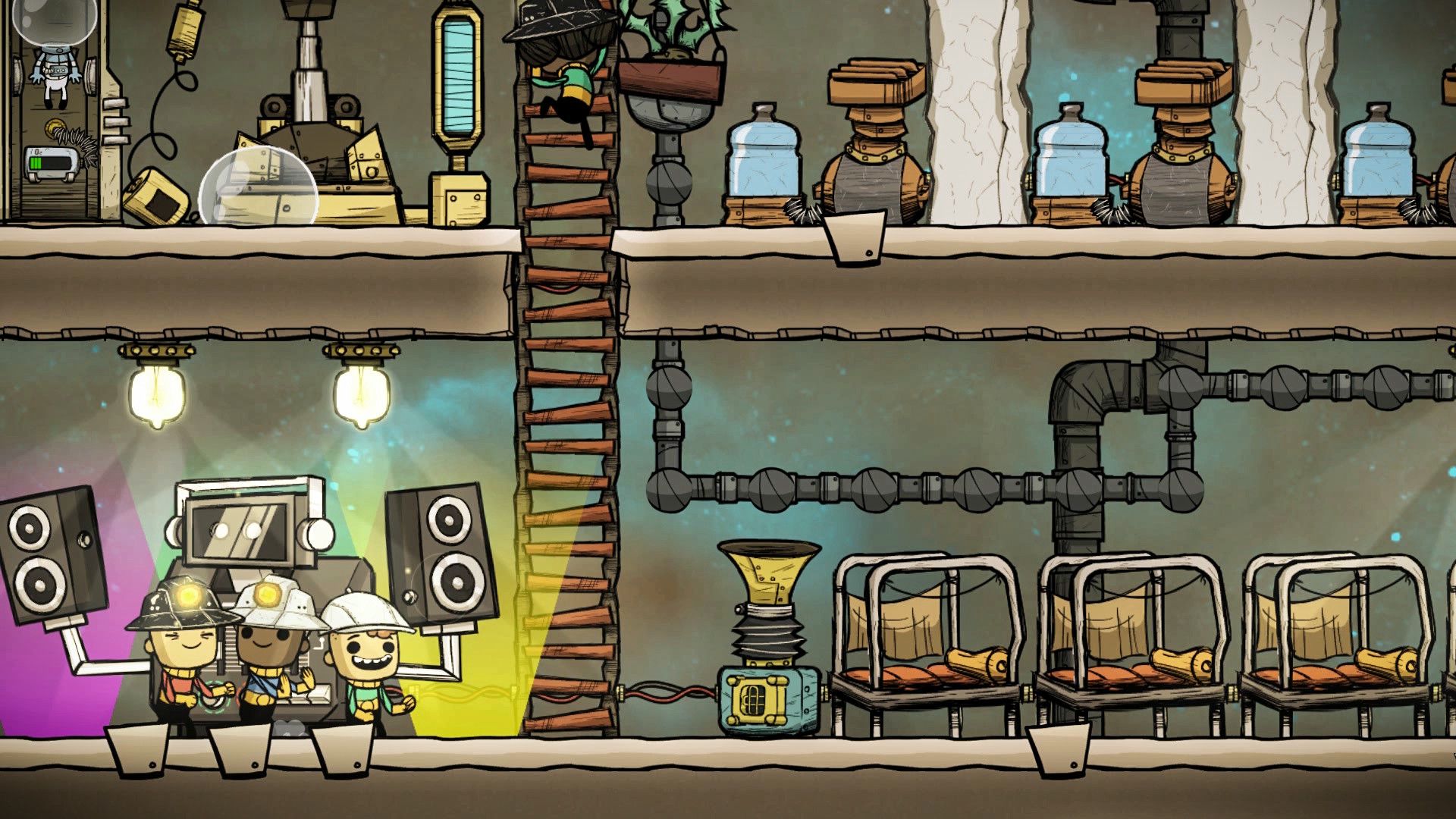 Sometimes the most surprising moment of electric power is when it suddenly disappears. In gaseous disaster simulator Oxygen Not Included, this is the worst thing that can possibly happen, with the exception of a dead body falling into your clean water tanks, something that, I promise, has never happened to me, there’s no evidence to support it. If the electrical power goes out in your spacehome for whatever reason (frazzled wiring, faulty battery, overheating components) then your whole asteroid colony soon has its little clone head in the guillotine. Without power, the water won’t pump, the cleaning systems will break down, the temperature of your perfectly balanced mushroom farm will go wild, and the gas pumps taking care of all that noxious carbon dioxide will chug to a halt. Everything will start to break, causing a cascade of failures and inevitable death. For all the videogame henchmen we have murdered with the blue sparky stuff of death, it turns out so many more will die just by turning it off. Scary.

One Off The List from… the most annoying children

Last week we met the most potty-mouthed, infuriating younglings this side of video gamesing with the 10 most annoying children in PC games. But one of these little brats will be spared the rod of judgement, thanks to your mercy and understanding. It’s… Hope from Final Fantasy XIII. 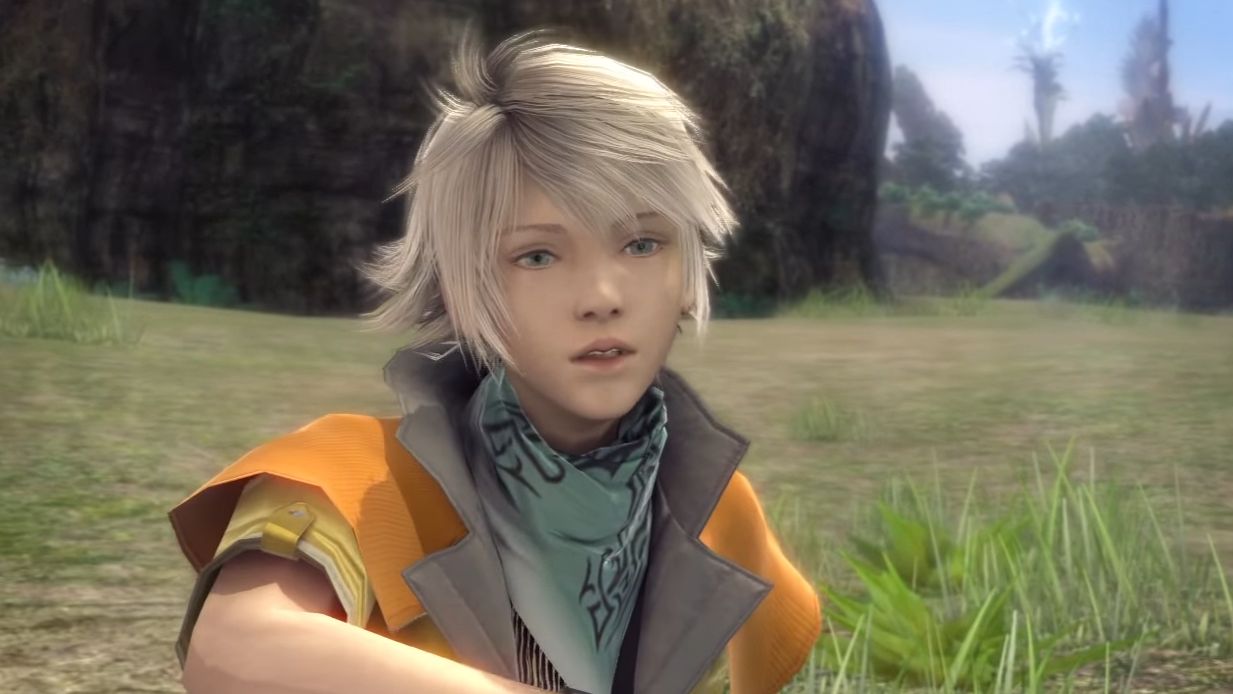 A surprise winner. Hope deserves to be let off the hook, according to list looker-over "Gealach", who said he should be replaced with protagonist Vaan from Final Fantasy XII. "Vaan is the supposed main character of FFXII," they say, "traipsing around in a plot that was written for the rest of the cast. Most of the story is people talking over his head and trying to come up with quests to send this kid into the next sewer. So yeah, Hope is clearly the lesser evil – because in FFXII, the annoying kid is YOU."

A sound judgement, fellow listocrats. See you next time.