If you click on a link and make a purchase we may receive a small commission. Read our editorial policy.
Developer: Bandai Namco Studios
Publisher: Bandai Namco

I expected to hear many sentences in Ace Combat 7: Skies Unknown, the latest in the long-running series of jet fighter games. Radio call-outs that any good fighter pilot might recognise. “Bogey on your six” - yep. “Missiles away” - sure. “Hostile down” - uh huh. All the familiar phrases of aeronautic warfare, hissing through the high-altitude static, predictable and safe.

“We need to make it to the space elevator” was not one of them.

This sentence marks the moment I went from sensibly playing this dogfighter with a reviewer’s eye, to being inescapably absorbed in the joyous idiocy of its mid-air showdowns and ultra daft plot. I celebrated this crossover by laughing my bum off. I’ve been absent from Ace Combat since the PlayStation 2 days, but I’m so glad to be back in this dumbass cockpit.

It’s more arcadey than simulator, despite its sim-like good looks. There are advanced controls that let you pilot with a bit more “realism” (you get more control over rolling and so on) but I stuck to the controls for dummies (using an Xbox controller) and felt perfectly capable of pulling sharp turns and launching last-minute bombs at radar trucks. This is gung-ho zoomy plane action all the way. The story is WAR. 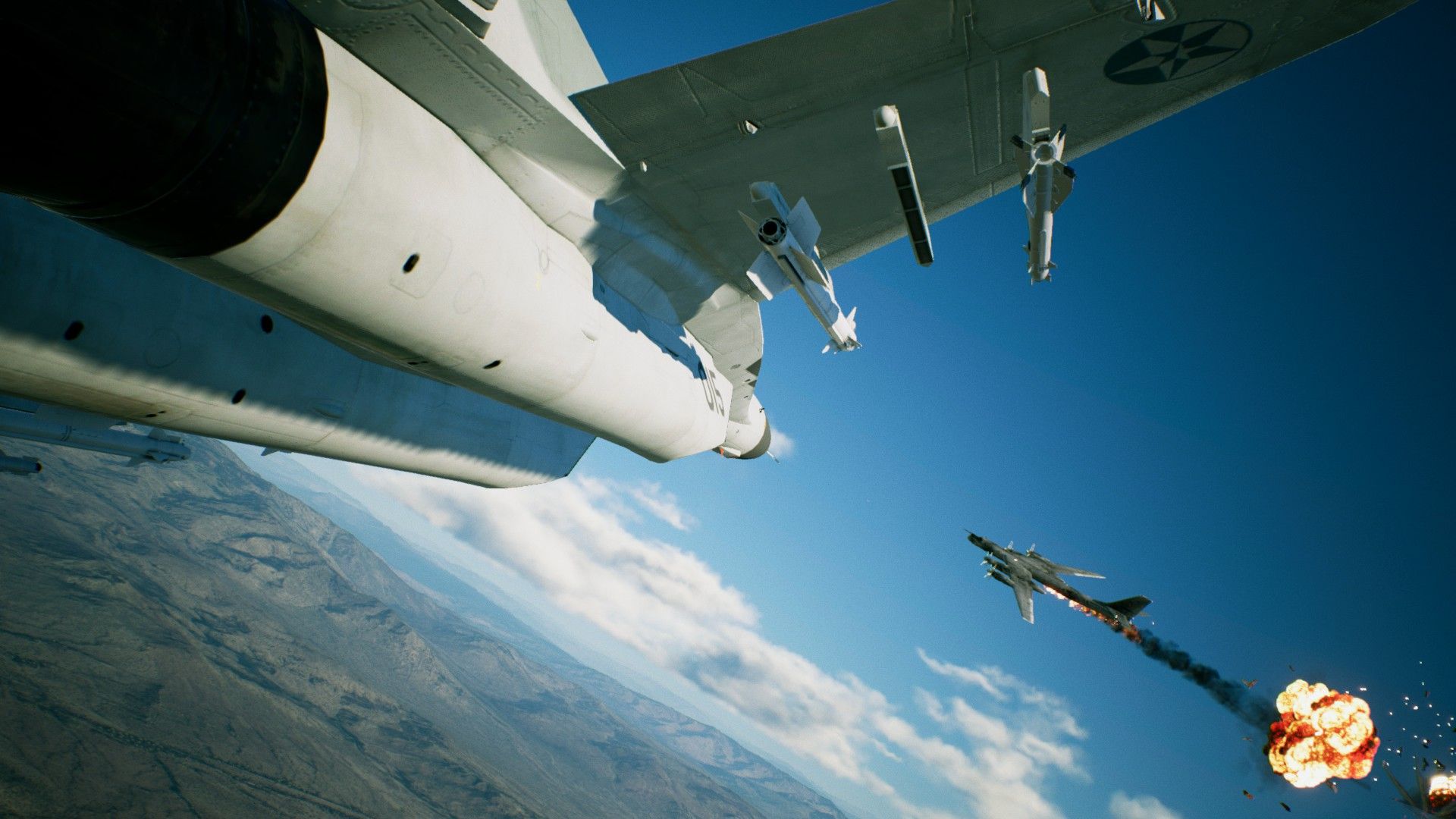 Let me try to explain it. The nation of Erusea has attacked Osea and they are both now fighting over the continent of Usea. I hope you got all that, because although this “Strangereal” universe is known to fans, it will be completely baffling to new or lapsed players. All these place names are so similar. Imagine explaining to an alien that Australia has attacked Austria and they are fighting over the region of Australasia. The alien would kill you. They hate being confused.

But in terms of complications, the naming conventions of the opening are the least of your worries. Because very soon, the story explodes outward like an expanding foam, into a complex sequence of nonsense and counter-nonsense. There is a space elevator. There are deadly drones. There is a princess. At one point you, a professional fighter pilot called “Trigger”, are relegated to a prison base, yet still expected (and trusted) to pilot an immensely expensive instrument of war over hostile AA guns. “Your mission,” says your new commander, “is to atone for your crimes.”

I won’t say why this line is uttered to you, because one of the biggest joys here is laughing out loud at the wall of batshittery that hits you with each mission, like a volley of missiles. But I will say this: Ace Combat 7 is the best JRPG so far this year. 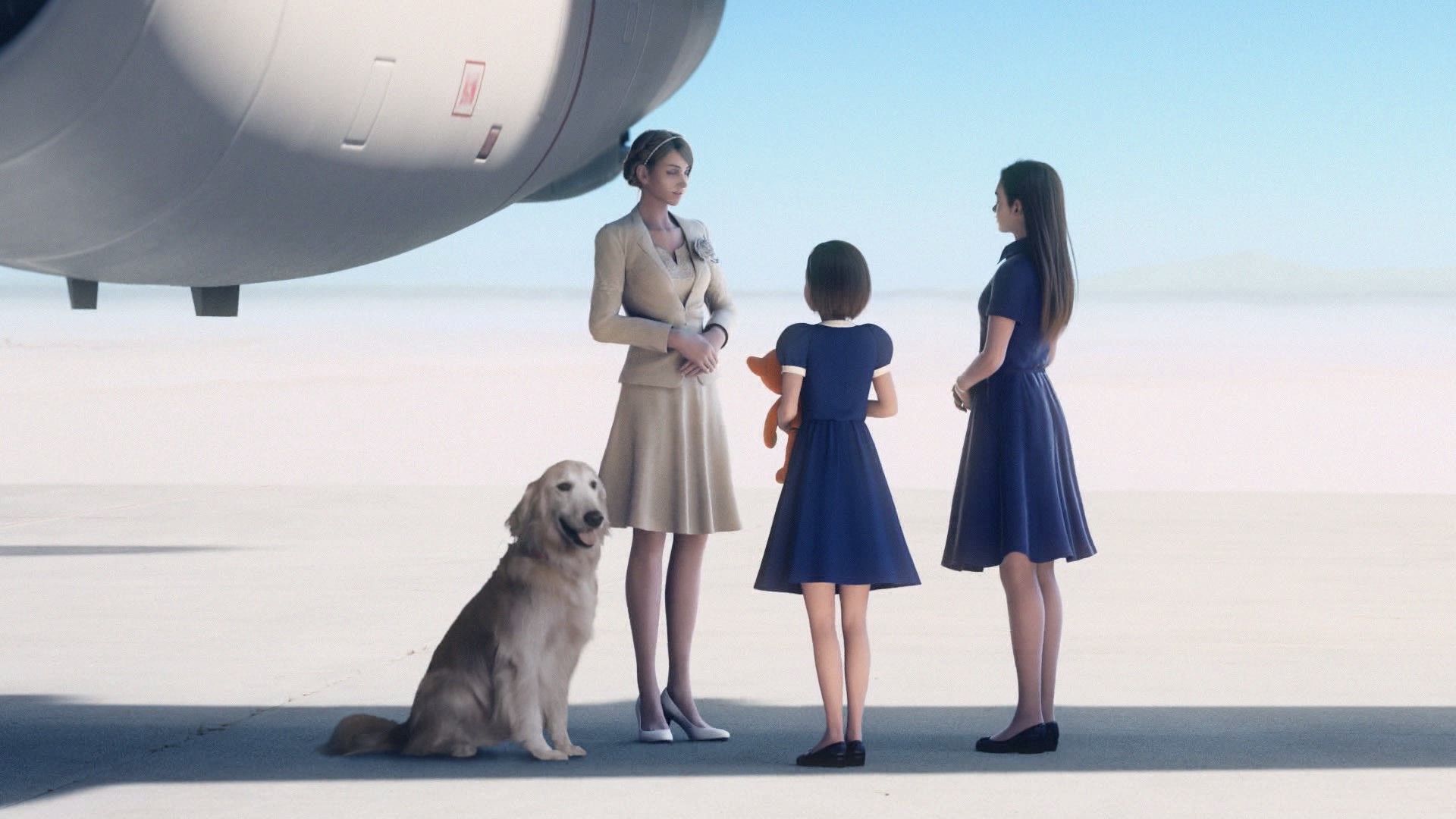 The missions themselves are happy-go-lucky shooting ranges, and they come and go at a blistering pace. Each one introduces some new set piece, some new environment or enemy type or challenge. Clouds can ice up your plane but they also protect you from missile lock-ons, says one mission. These SAM sites are all hiding in a hard-to-navigate canyon, says another. Hello, says a third mission, shoot down this sea base by flying through the narrow struts and blowing up each supporting column like some sort of airplane god. Do it, I believe in you.

There are a couple of duds, of course. One level is a stealth mission in which you pilot through a twisting gulch full of spotlights, which sounds excellent in the briefing room, because you are basically doing a sneaky Death Star run. But then it turns out to be of the insta-fail variety. Spotted by a light? Mission failed, back to the start. No. Videogames, stop doing this. I’m glad to say dud moments like this are the minority, though. The variety on show here is a joy compared to the Ace Combat I remember, which was mostly about flying in endless circles chasing the tail of your foe as they simultaneously chased yours, turning aerial combat into an ouroboros of boredom. 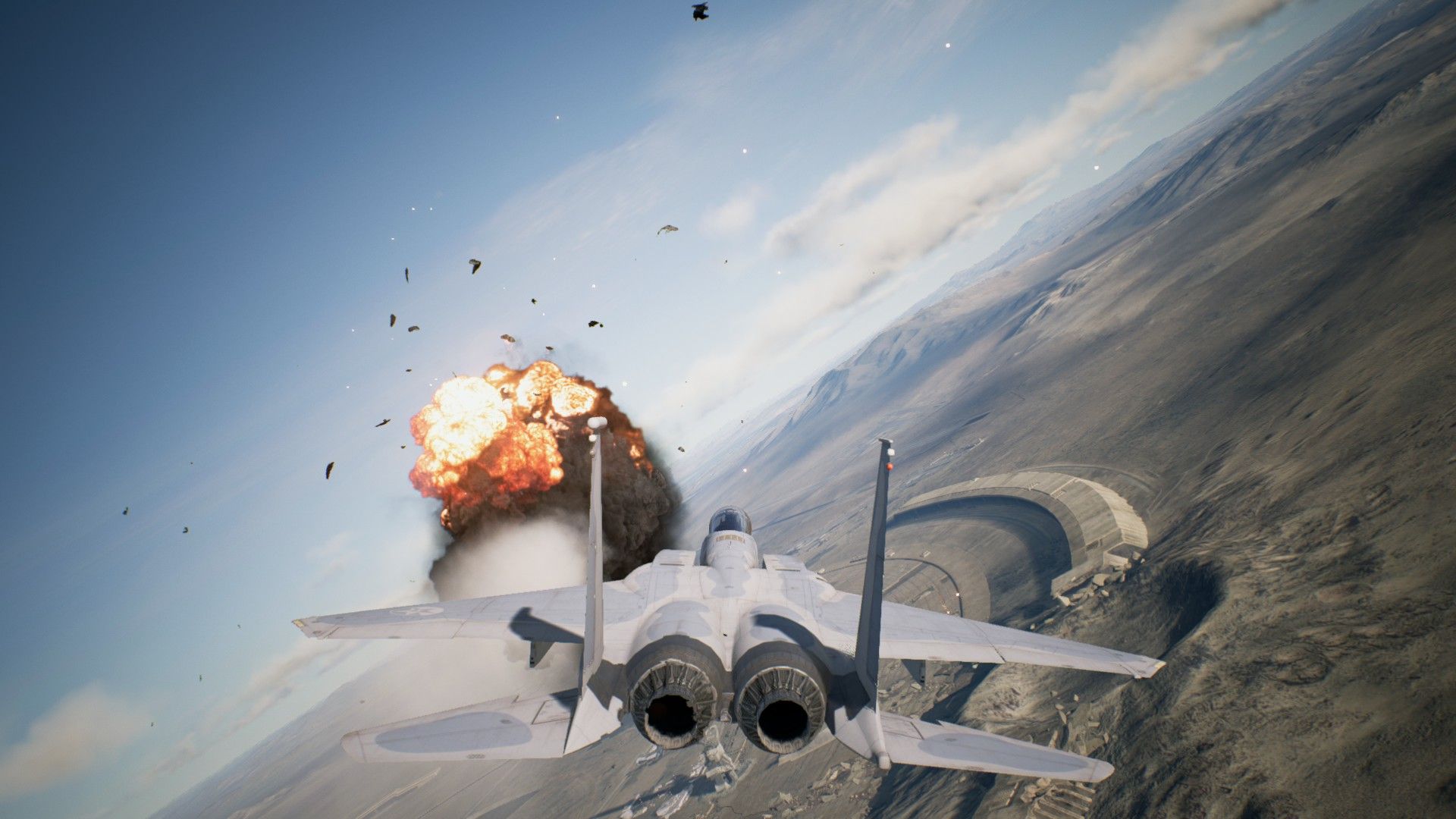 Once or twice that annoying loop-the-looping happens here, usually when fighting tough enemies, like ace pilots or ludicrously agile drones. But you soon learn the power of the high-gravity turn (punching your brakes and acceleration at the same time) which transforms the tail-chasing into a game of high-stakes bullet chicken. It helps that while you are doing all this, the clouds often float by in a gorgeous mist, sometimes blessing you with a baptismal squirt of rain as you pass through their wet fluff. It’s beautiful. After each mission you get to watch a replay, where you can swap camera angles and fast forward or slow down. I routinely watched this replay, as much for the clouds as for the moments when Trigger passed through the fiery, black puff of an enemy plane’s demise.

As for the fighter jets on offer, you’ll have to look elsewhere for a detailed rundown. I don’t know my F-15 from my F-22A. My Su-57 from my MiG-29A. But I know they all look very shiny. And I know how to use a skill tree. Here you unlock new planes and parts with the currency earned from each mission. Before each new sortie you strap parts to your chosen death machine. Some parts increases your acceleration, for instance, others might increase the amount of special air-to-ground missiles you can take on your next bombing run.

This customising menu lacks complexity, and you can't change the look of your fighters until you’ve completed the campaign once, which feels like a shame to one-and-done storyline players like myself. Despite that, the hangar is certainly enough to satisfy me. All I want is a cool-looking jet that goes “whhhhhoosh!” as it passes through another thunderstorm. 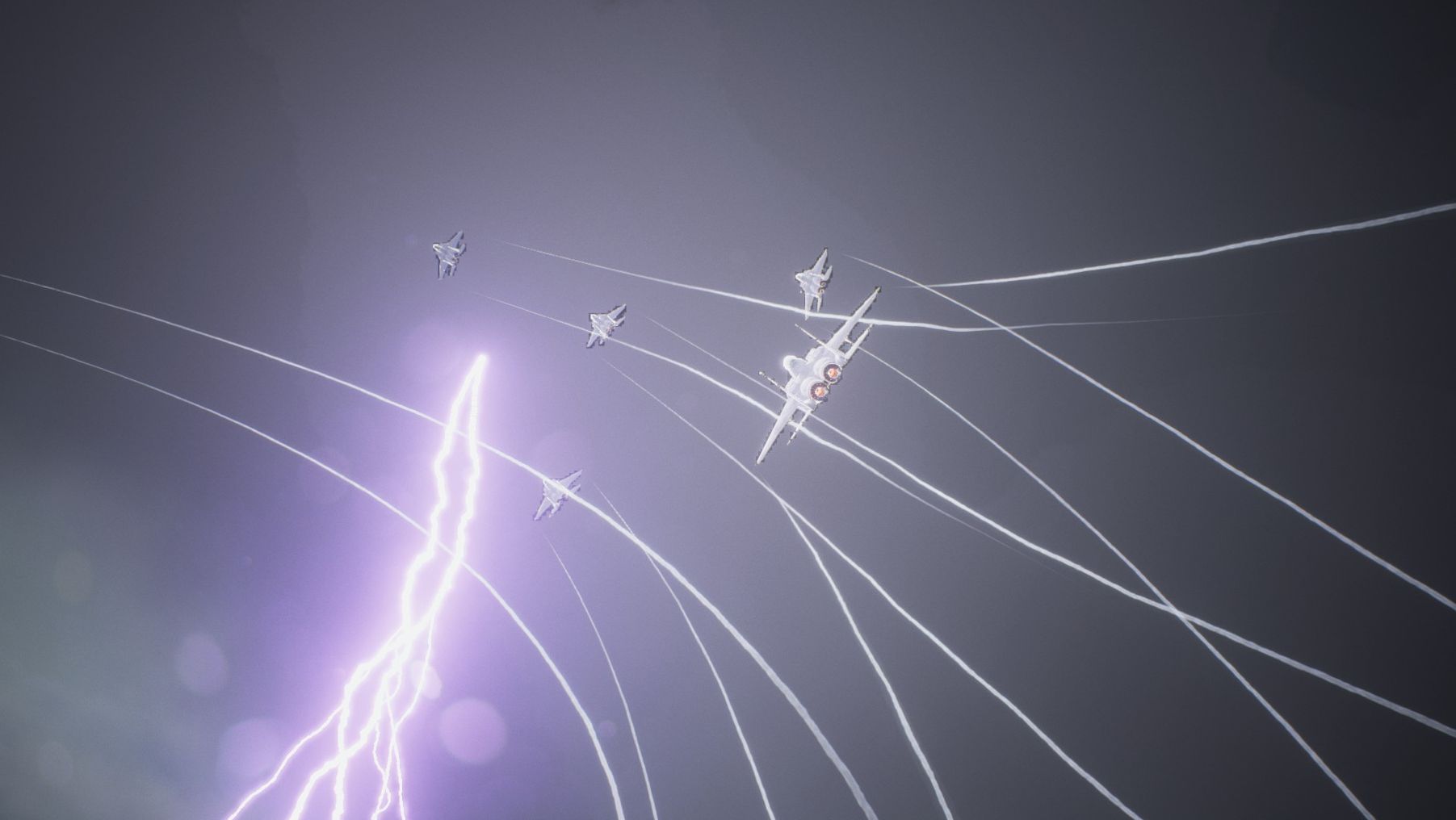 And those thunderstorms are neat (when lightning strikes it messes up your HUD). As is the sandstorm of another level. For an environment as seemingly plain as “the sky”, it moves with refreshing impatience from one silly-cool setting to the next. Flooded cities, glacial bays, nocturnal ports. In some skirmishes your targeting computer gets messed-up, leading to potential friendly fire. There are also a sprinkling of short sequences, both pre-mission and post-mission, where you have to do some routine task just to change the pace. Refuelling in mid-air, for example, or taking off, or landing at the airbase you’ve just captured.

There are oceans featuring aircraft carriers with gaps wide enough to fly through at top speed. There are levels that have unknowingly invited players to perform perilous stunts inside the warm glow of a narrow tunnel, like some angry metal bat doing a backflip inside a womb. I can understand this desire fully, being an alumnus of Crimson Skies. There were so many instances in the campaign when all the action movie parts of my brain lit up. And after every flash of “mission accomplished” I felt compelled to zoom noisily between nearby buildings before the inevitable fade out, or to take my jet screaming across the surface of the water, buzzing the fishes, spraying water up behind me like a jet ski too hubristic to stick to the water. 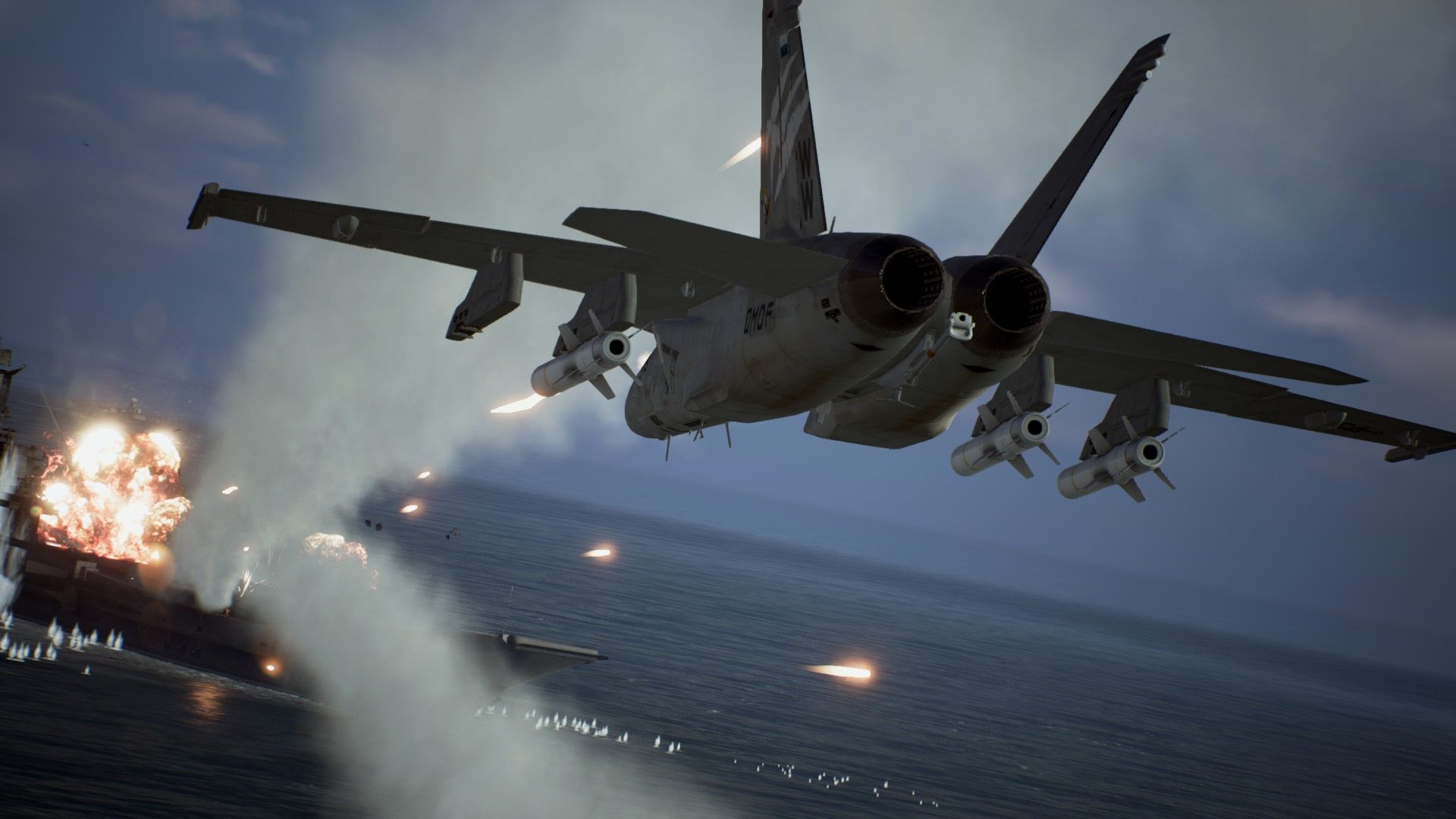 There is some hand-wringing to be done here, obviously, as there often is with overly militaristic games. There is probably something seriously wrong with a world in which Lockheed Martin, Boeing and Northrop Grumman sponsor a videogame that simultaneously celebrates the efficacy of drones at the same time as it asks you to shoot them down with a very affordable Eurofighter Typhoon. You could see Skies Unknown as a rebellious tale of humanity clinging to their traditional roles in the face of encroaching automation. Or you could see it as a big commercial for guns and bombs. Either way, that discussion is outside the scope of this article. All I can surmise from where we are today is that planet Earth is fucking stupid, and so is everybody stuck on it.

Luckily, that stupidity extends to this game’s story in the most wonderful of ways. I wouldn’t call it "accessible", but it is too dumb to be hostile or unwelcoming to newcomers. Which is good, because (as John discovered when he posted this week’s Steam charts) trying to understand the Strangereal universe through Wikipedia alone is like trying to understand Kingdom Hearts by capturing and interrogating a Disneyland mascot. Don’t worry, there’s an easier way to reach enlightenment. 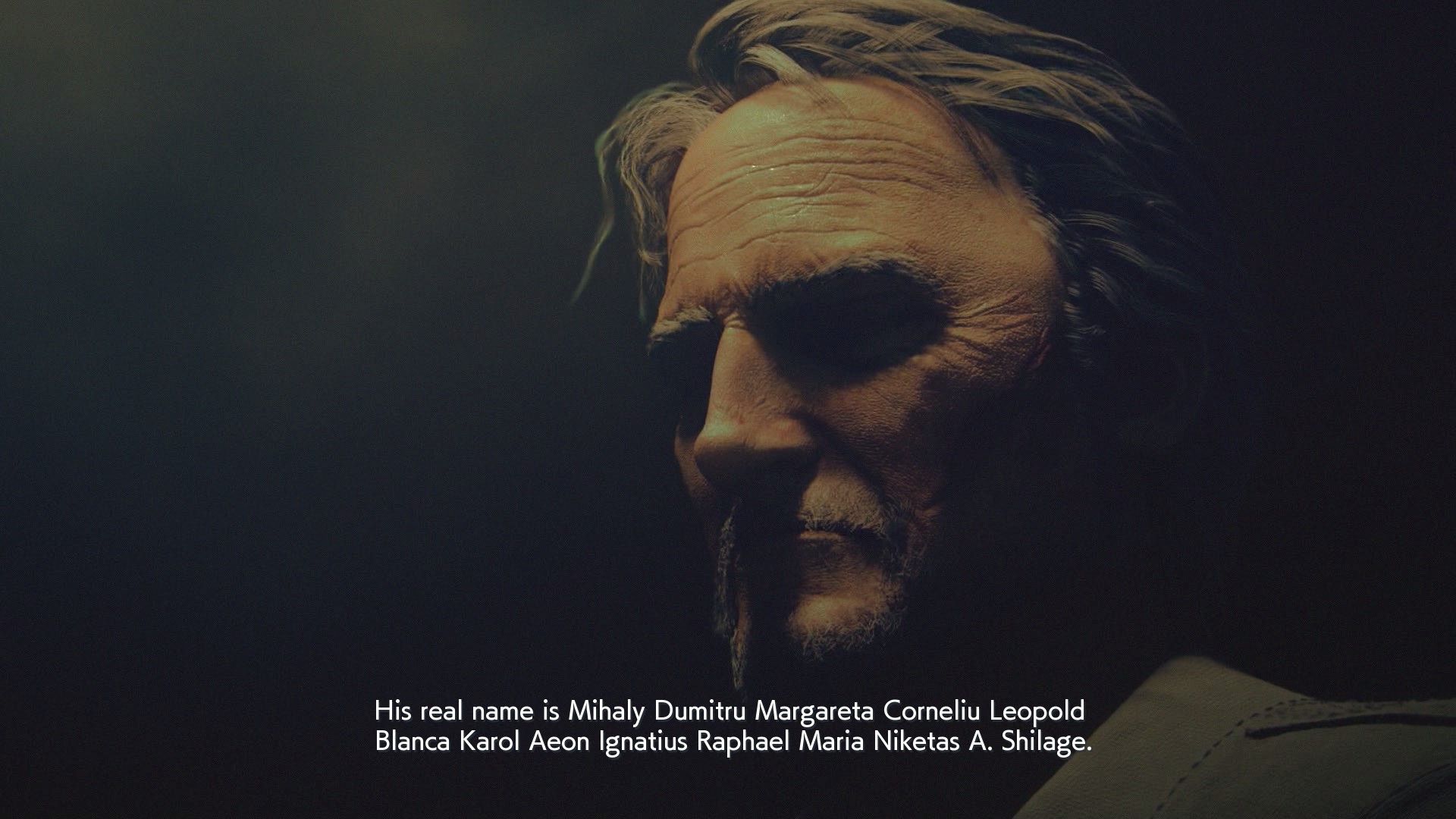 Ignore the GIFs and ‘splosions for a moment. I already told you the game is good. Instead, direct your attention to the above image, the only image you need. Many ludicrous action movie-isms occur both in the cinematics and mid-mission, but this shot of an old pilot is the screen that truly represents Ace Combat 7’s devotion to the absurd. In this fighter pilot’s tale, a name cannot just be a name; it must be 14 names. There must also be a single unrevealed initial – A - lest the other 13 names not adequately display this aging pilot’s incommunicable nobility. 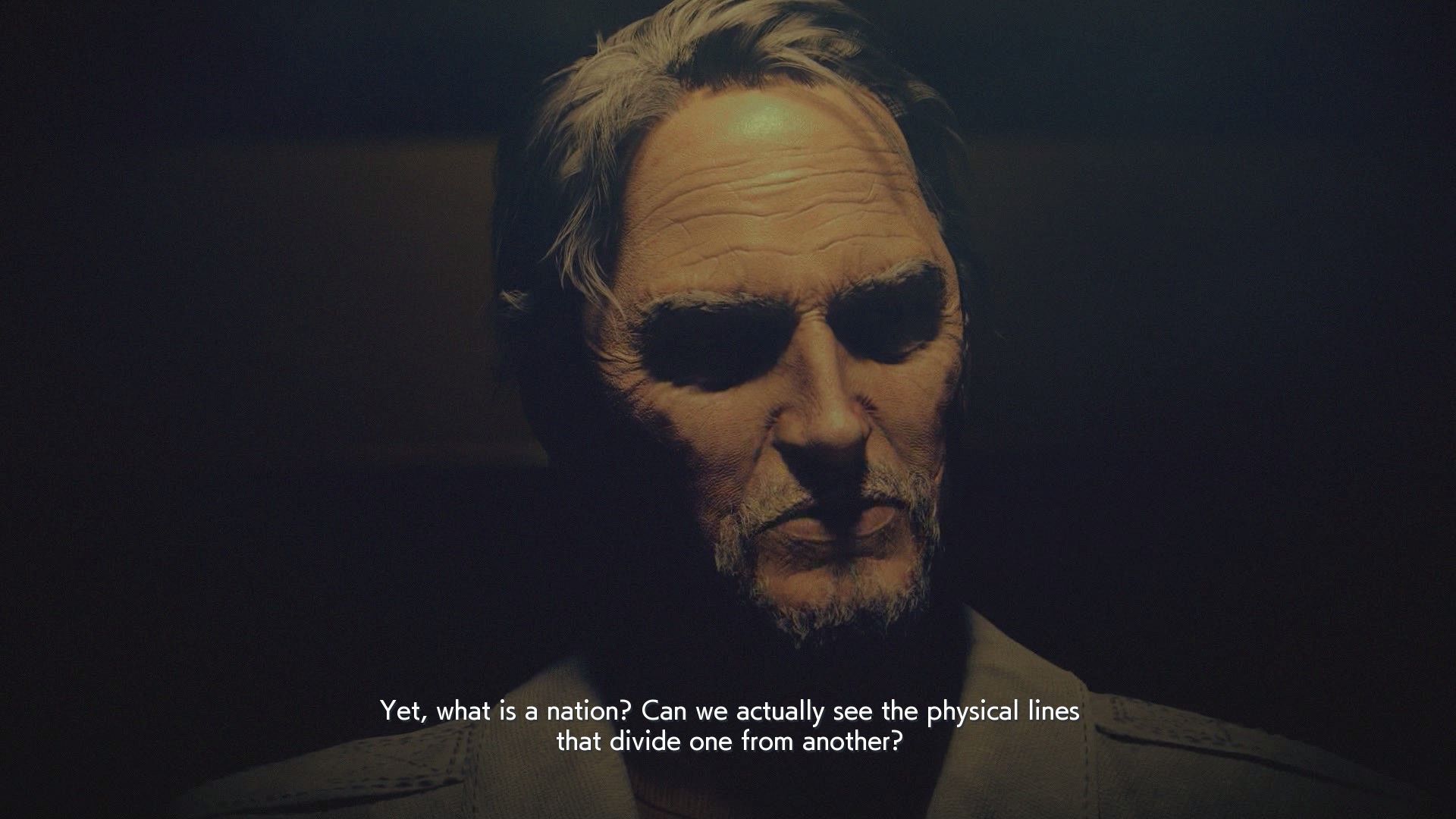 I put it to you, that to understand the portrait of this old ace (who is described as having flown so much it has literally poisoned his body) is to understand the philosophy of the Strangereal universe. Absurdity is ubiquitous. We ourselves live in a world in which you can look at a piece of electric glass and decide, based on the tiny symbols written by a man hundreds of miles away, whether or not to trade 50 imaginary metal discs for what is essentially a playable advertisement for a group of arms manufacturers. If our planet can be this ridiculous, why can't the world of Ace Combat 7 have a man with 14 names? Why cant it have a space lift? Be reasonable. 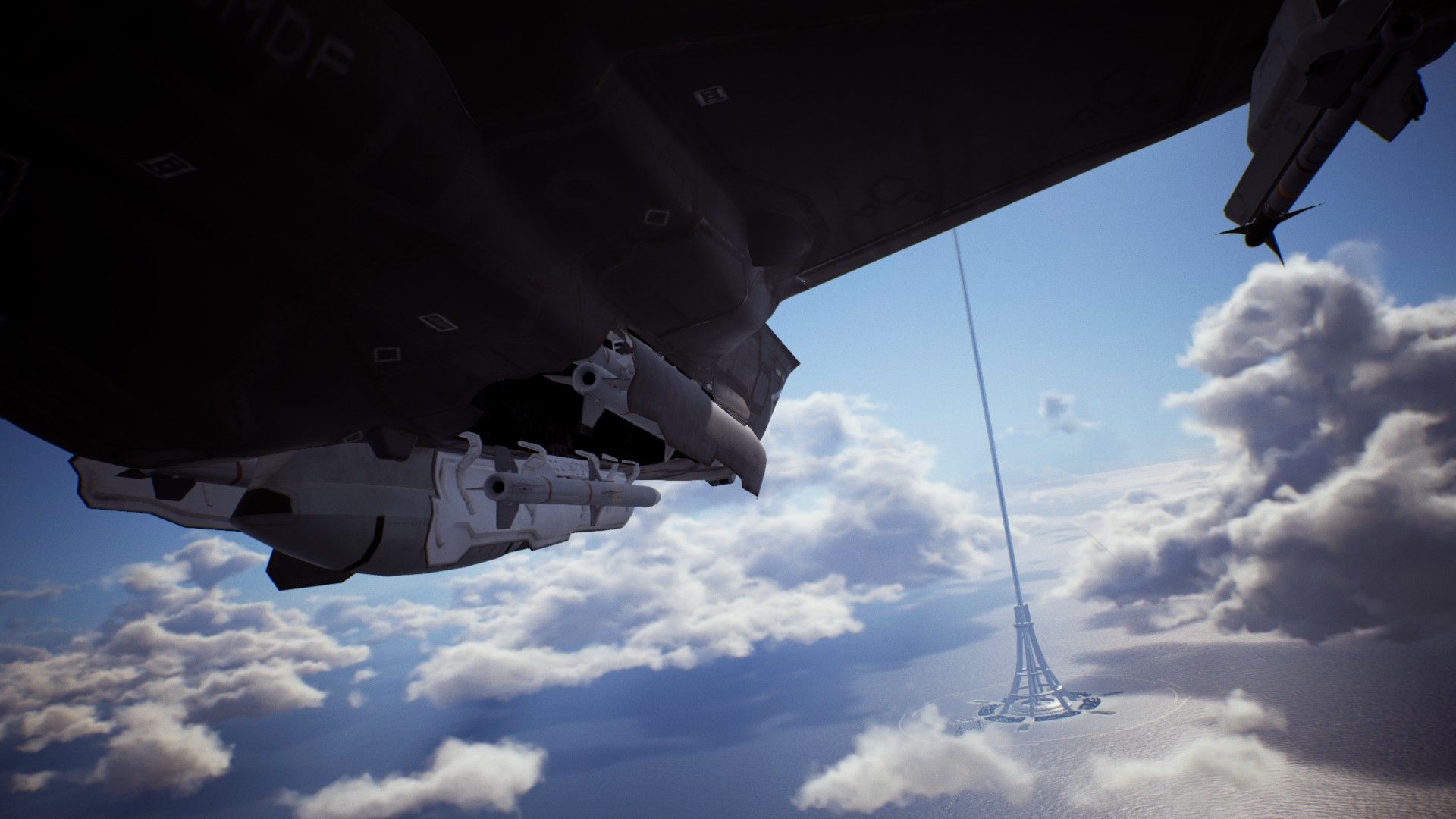 So, there you have it. I’m very happy with my planes wot go “whoosh”. The only reason I’m not giving it a Bestest Best badge is because it doesn’t do anything particularly new. It just does everything very well. Make no mistake, if you’ve played a game about shooting missiles at tiny trucks before, this will be familiar, these skies are not unknown, they are well-charted. But they’re excellent skies anyway. Dumb, funny, exhilarating, varied and full of stupid explosions. Like the drones it summons, Ace Combat 7 is not exactly self-aware. But it is close enough, judging from the humour of its over-the-top action. And it barely matters anyway, because it’s a damn fun videogame.