The greasy realm of the videogame is not always the best place to look for good writing. For every Disco Elysium there are roughly 800 Detroit: Beyond Humans. But it is a good place to look for wondrous, over-the-top nonsense. I’m talking about character dialogue so flamboyant and exaggerated, you could insert some line breaks and it would instantly become a verse in a glam rock anthem. Here are the 12 most extravagant, exuberant, and intense lines of dialogue. In games, subtext is just whatever’s written on the side of the nuclear submarine.

This military officer is very angry at his underlings. Luckily, he is an expert of communicating that anger in a productive manner through liberal revision of Newton’s laws of motion. Imagine a physics teacher who joined the royal marines for 10 years and went back to teach in his old school, screaming “No credit for partial answers, maggot” at the Year 10s. This 1 minute and 18 seconds of dressing down, delivered with all the terrifying authority you would expect from astrophysics boot camp, is loud, showy, and still better than anything in Anthem.

”What does a lowly, ephemeral speck know of all creation?" - Leviathan, Final Fantasy XV

If you were an ancient, slumbering God, risen from hundreds of years of peaceful REM, what would you say to the tiny, flesh-coloured creature who woke you up? Don’t bother answering. You would say this. You would unfurl your fossil tongue like a long carpet of astroturf and you would roar this exact line at the small lady with the stick. The Final Fantasy XV writers understand this. They have penetrated the precise mentality of a big wet snake. They know if any of you were this time-worn mythbeast, you would shout these exact words, compelled by an antiquarian rage felt by no other being in existence, you would scream this phrase and only this phrase at the miniscule wart of a human who dares to raise her gnat eyes to you. WHO DOES SHE THINK SHE IS?

"In time, you will know the tragic extent of my failings" - geezer, Darkest Dungeon

Tfw you run laughing and wailing through the blackened arcades of antiquity.

“Firing a gun is a binary choice. Either you pull the trigger or you don’t” - Max Payne, Max Payne 2

Max Payne is mayor of the indulgent noir aphorism. If he had a sidekick she would be called Polly Pastiche, and then she would die. Officer Payne gets a lot of good lines. “I had a bomb ticking in my head,” he growls. “No amount of painkillers would disable it.” In Max Payne 2 he smooches Mona, a woman who is also a proponent of fair bullet distribution among the masses. “Kissing her,” he says, “I think of the cold laws of cause and effect.” This man is a machine of wild dialogue, capable of delivering multiple-clause contempt even as he unloads shotgun shells into unprepared bellies. He is what would happen if Raymond Chandler stepped into the machine from The Fly, and at the last second a wandering Tom Clancy flew in and closed the door. Rom Chancy.

“There are no such things as things” - a thing, Everything

Or to use the full quote by 1950s thought-thinker Alan Watts: “The basic problem we’ve got to go through first is to understand that there are no such things as things, that is to say, separate things, that that is only a way of thought.” Whoa man, that is, like, really thought-provoking, y’know? Hang on, it keeps going. “There are no nouns in the physical world,” he says. “The physical world is wiggly.” Oh wow. Stay there, would you mate, I’m gonna grab my “mind blown” emoji. Think I’ll need it for this.

“I used to be an adventurer like you...” - Guards, The Elder Scrolls V: Skyrim

The extravagance of this death-flogged catchphrase has been lost to the dark well of memery. But throw yourself back to a humble time when this sentence did not exist. Imagine, if you will, hearing it for the first time. Picture yourself at the market, quietly buying a fish. A man with a sword appears behind you, as if from nowhere. “I used to be an adventurer like you,” he says, striking up an unsolicited conversation as you put a wet trout in a grocery bag. “Until I took an arrow in the knee”. Jesus, you think. This complete stranger went from zero to mentioning his war wounds in a mere 16 words. You try to hide your concern. How do you respond to something like that? “What a pity”? “Sorry to hear that”? You opt for a smile, you nod politely, and pointedly begin counting your change, hoping he will go away. The man remains there, staring. He stares, and stares, and he does not move.

A masterclass in characterisation.

“And thus, guilt, repentance, mourning and every pain of the soul of all kind were visibly and tangibly manifested, everywhere and in all of us” - Blasphemous

Aside from being delivered with an astounding John Hurt impersonation, this line will make even the most lapsed of Catholics sit up straight, and feel a single Rosary bead of cold sweat dripping down their back. Blasphemous is a pretty decent soulsie, full of precise, gory side-on slashing. Its prose is purpler than a giant, self-inflicted bruise, and from an editor's point of view, hilariously inefficient. Yet it seems to suit this world of weeping and prayer and blood-splashed cobblestones. This is big, brash videogame writing in biblical mode. Long-winded, ornate, barely understandable. Scares the shit out of me.

Claire’s pitched “what-tha-faaack!” at 1m 18s is my favourite. What’s yours?

“I will not apologise for simply expediting the inevitable” - Caustic, Apex Legends

Arena combatant and secret 14-year-old Papa Roach fan in a fake beard, Alexander “Caustic” Nox, is keen to show everyone how clever he is. He uses the sciencey word “variable” as a placeholder noun for all sorts of things. Gas tank? That’s a variable. Footsteps? Those are a variable. Bullet in the back of the skull. That’s a variable right there, colleague. This line about him “expediting the inevitable” is the prime example of that carry-on, and I love it. He is an insufferable logic boi with a nascent fetish for watching people cough. “Some compounds are inert,” he says at one point, “having little to no effect on the outcome… like you.” God, Alex, you’re such a dick.

“Please let us kill you! We beg you!” - A barkeeper, Yakuza Kiwami 2

In this scene, father figure of Tokyo and well-known fist-haver, Kiryu Kazama, has rumbled a mole among his friends. This fearful barkeeper has been passing off information to a dangerous faction, and Kiryu wants to find out why. But the drinkslinger is soon backed up by local business owners. Chefs, waiters, and stall workers rush into a fight they know they cannot win. So they humbly ask their target’s permission to murder him. A bold gamble. It doesn’t work.

For a man who wants to eradicate the English language, he sure talks a lot of it.

Last week we celebrated Valentine's Day by looking at the 10 most toxic relationships in games. It was awful. But one unlikely couple made it through all our judgemental sneering and is to be spared the ravages of the list. It's... Red and a big sword from Transistor. 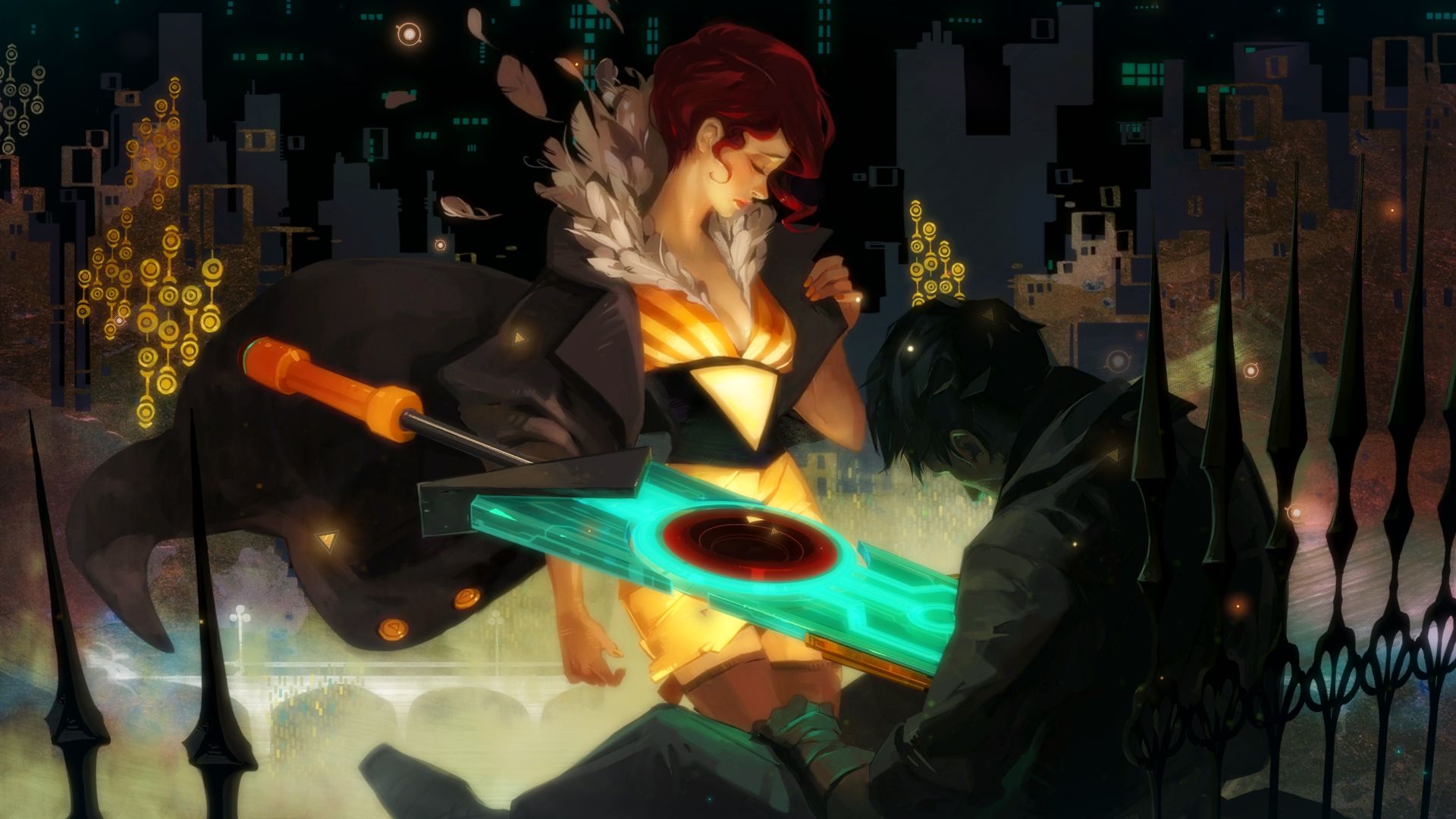 List-dweller "Skabooga" says the lady-meets-weapon relationship should be spared ridicule, because they "unambiguously enjoy each other’s company". Which is true. "She didn’t really kill herself so much as move in with him," they argue, "and that must be a good indication of their increasing commitment to each other."

We don't need to replace this couple with another unhealthy pairing. But if we did, says "Gorkon5567", it should be with Leon Kennedy and Ada Wong from Resident Evil 2, "on the basis that nobody actually knows what their relationship is, including Leon."