I'm not sure there's a more dangerous, time-consuming diversion in gaming than a good ARPG and Path of Exile [official site] is a very good ARPG. It doesn't have the dynamic world of a Soldak release or the exquisite polish and crunch of Diablo III, but after playing for more hours than I care to mention, I'm still peeling back layers of the character system. In many RPGs, characters become more fixed as they grow but in Exile, a high-level character is a broader foundation for possible builds rather than a specialist.

There's a major expansion, Fall of Oriath, coming soon, and I'll be looking into the future of the game shortly, but before I do that, I'm going to explain why this is my favourite modern ARPG.

It's easy to fall into the trap of thinking every ARPG is pretty much the same, varying in flavour, setting and quality rather than design. Reading guides and reddit discussions about high-level play can be mystifying – a skim across the surface of any of the major players in the genre shows more in common with idle clicker games than complex roleplaying systems. Enemy health bars go down, hero experience levels go up, skills are gained, loot is collected. Through it all, the monsters get bigger and nastier, you're repeatedly told that the stakes are rising, but there is barely any sense of threat or need for tactical nuance.

None of those observations are innacurate but the real shape of an ARPG only reveals itself late in the game. They're structurally peculiar, treating the first playthrough as a sort of getting-to-know-you session during which you can figure out how everything works before increasing the difficulty and taking your characters for a proper walk on the wild side.

Path of Exile is a particularly strange entry in the genre. It begins with your character shipwrecked, washed up on a beach, and assaulted by the reanimated corpses of the drowned. You'd think that'd be quite the wake-up call but you can grab a piece of driftwood, tighten the knot on your loincloth, and lazily biff the bloated bligters 'til they fall down for good.

You are, the plot regularly reminds you, an exile in the worst place imaginable, and it certainly looks the part. Anyone who thought Diablo III might be a little too bright and cheery might well find the opening sections of PoE a little too grim and dreary. The beach makes Blackpool's pungent sands seem appealing and if the lumps of dead flesh attacking aren't bleak enough for you, a crab-thing will kick sand into your eyes for good measure.

It's Holidays From Hell with a necromantic twist. Even the weather seems determined to make you glum rather than afraid; no sky-splitting storms to speak of the gods' wrath, but rather a thin drizzle as if the gods have fallen to sleep and are drooling on the pillow.

'Glum' is the word I'd use to describe the first steps on the Path of Exile. It gets brighter though and the moment I fell for the game was mid-way through the first act when a journey through dank caves brought me out to a cliff-top ledge. The next section is beautiful, all the more so for being concealed behind that initial miasmatic veil down on the beach. Birds nest up on the cliffs – the kind of jolly seaside birds that would rather eat leftover chips than your eyes - and there is life and light rather than the constant stream of hungry dead. 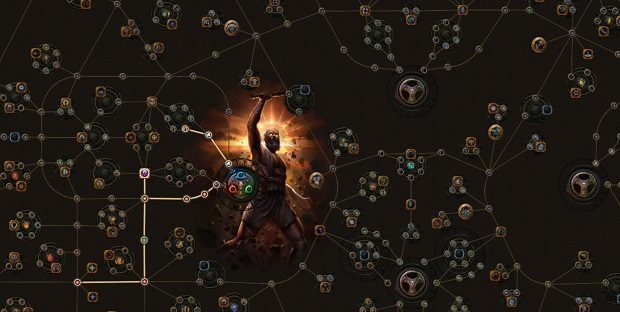 I could take you through the entire game like this. As it unfolds, the layers of the world peel back and there are ominous moments, chaotic moments, grotesque moments, and all sorts of other encounters and locations. Push through the opening and you'll find a surprising amount of variation on the overall grimdark theme, but all of the horrors and haunts are little more than backdrop for the main feast, and that's the great machine that is the loot system.

What matters isn't the way that loot drops, but the weirdness of the things that can drop. I'm not referring to weapons and armour, though there's plenty of stuff to collect, I'm referring to the items that remix the areas you're playing in, or modify the difficulty on the fly.

You might remember socketed items from Diablo II. That's certainly the game where I first encountered them. They're regular items – from daggers to platemail – but they have sockets in which gems can be placed. Those gems modify the item, allowing players to build custom equipment rather than relying on loot drops.

Path of Exile takes this idea and runs with it. Not only will you find many more items with coloured sockets, the items that you can insert in those sockets unlock whole suites of abilities that are then assigned to hotkeys. You can completely change your character build by switching from one weapon to another, or by wearing a new hat with a couple of shiny rocks embedded in it.

Class, you see, is a flexible notion. A big beefy fellow with a giant sword can morph into a fury of elemental magicks if he wears the right set of armour, customised with particular gems. Experience allows you to increase the scope of your character rather than his or her specific abilities, increasing stats rather than unlocking skills. The skills are mostly tied to equipment so as you move through the game, rather than specialising, you broaden possibilities, allowing for all kinds of customisation and skillset switching.

That makes the game far more flexible than many of its genre stablemates, and the customisation runs deeper. Areas of the map can have modifiers placed on them through use of items, which affect the types of enemies that appear and the kind of loot that you might discover. There's a whole event type called a breach which looks like the most awesome unleashing of cosmic horror, creeping across the screen and bleeding out colour while it spits out hideous alien creatures. In many games it'd be a setpiece; here it's something you can trigger intentionally for the fun of it.

The perfect ARPG is one that occupies me without demanding all of my attention. They're the games I like to play when I'm listening to a podcast or audiobook, so I'm not against some of that idle clicker mentality. Path of Exile supplies that, happily providing cerebral background noise, but if I want to, I can start digging around under the bonnet and fiddling with its inner workings. It's a game that lets me play at my own pace, and that lets me dive deep when I choose to but never forces me to engage with its more difficult challenges or most intricate systems.

And, remarkably, it's free to play. I've never spent a penny on it, which seems awful considering how much time I've spent playing. There's a whole microtransaction menu but I've never had to use it and suspect it's where the true high-level players hang out, the ones who want the final piece of that unique armour set they've been finding scattered around the world, or really feel the need to respec until everything is just right. You can do all that without spending money, but there might be some grind involved.

For me, Path of Exile is a game of happy accidents. If I find a new ability, I'm delighted, but I don't tweak all the variables to increase the likelihood of positive outcomes. The beauty is that if I wanted to, I could, but as it is I can hack and slash somewhat arbitrarily, only occasionally stopping to fiddle with my sockets.

The same is true of the multiplayer aspect, which I've barely touched. I see other characters, when I'm a town hub, but they're like the ghosts of Dark Souls, weird visions of the kind of person I might have been if I'd gone another route or found myself in a different walk-in wardrobe. I don't talk to them and they don't talk to me, and the game isn't hurt by their absence.

I love Path of Exile because it rewards my time. Even after what feels like a fairly light and mindless two hour session, I can stop, look through my new belongings, and change my character or the world around him. When The Fall of Oriath expansion is nigh, I'll be back with more thoughts and insights from the developers.