On June 19th, the next quarterly update for Path Of Exile - the free-to-play action RPG - will give players the chance to trade blood-soaked knives for green fingers. It's called Harvest, and it tasks you with managing a garden. Of course, your glowing nocturnal plants will blossom into monsters needing slaying, but this should provide some downtime between dungeon crawls in a game that has grown faster and more aggressive with every update. How does your garden grow? See my thoughts after a chat with Grinding Gear head Chris Wilson, plus the trailer below.

As is standard for the game, the start of the Harvest league marks the quarterly reset point for Path Of Exile. Players that want to jump into the glamorous world of combat gardening will have to roll a new character with an empty stash. It might sound like a hassle, but getting to experience everything fresh with a new twist is half the reason I keep coming back to the game, and this league sounds far twistier than the last. While the (still ongoing) Delerium league is fun, it mostly amounts to extra enemies to fight as you progress normally. Harvest looks to be a lot more involved, but also more tangential to the main game.

Not long into the story, players will meet Oshabi, a new character who will teach them to harvest magic seeds from caches in the wild, then provide access to a plot of land to plant them in. Each plant needs a number of 'turns' to grow into a luminous pod (with time advancing each time you find a new seed cache), and then they can eventually be harvested through combat. Grow monsters, fight monsters, and then convert all that tasty monster life-energy into a handy panel of new item crafting options, providing new ways to min-max your favourite equipment.

While Harvest Moon and Stardew Valley are easy points of reference, Wildon admitted that the designer responsible for Harvest is a huge fan of Blue Byte's Anno series. In order to grow bigger, more powerful monsters (and reap their rewards), players will need to set up Anno-like supply chains, siphoning energy from lower-tier plants to support the growth of larger ones. Work your way up to the top tier and you can grow one of three new bosses, giving access to the best crafting options in the game. I'm curious to see whether this tempts players away from Unique gear with its rigid perks, and more towards customised Rare equipment. 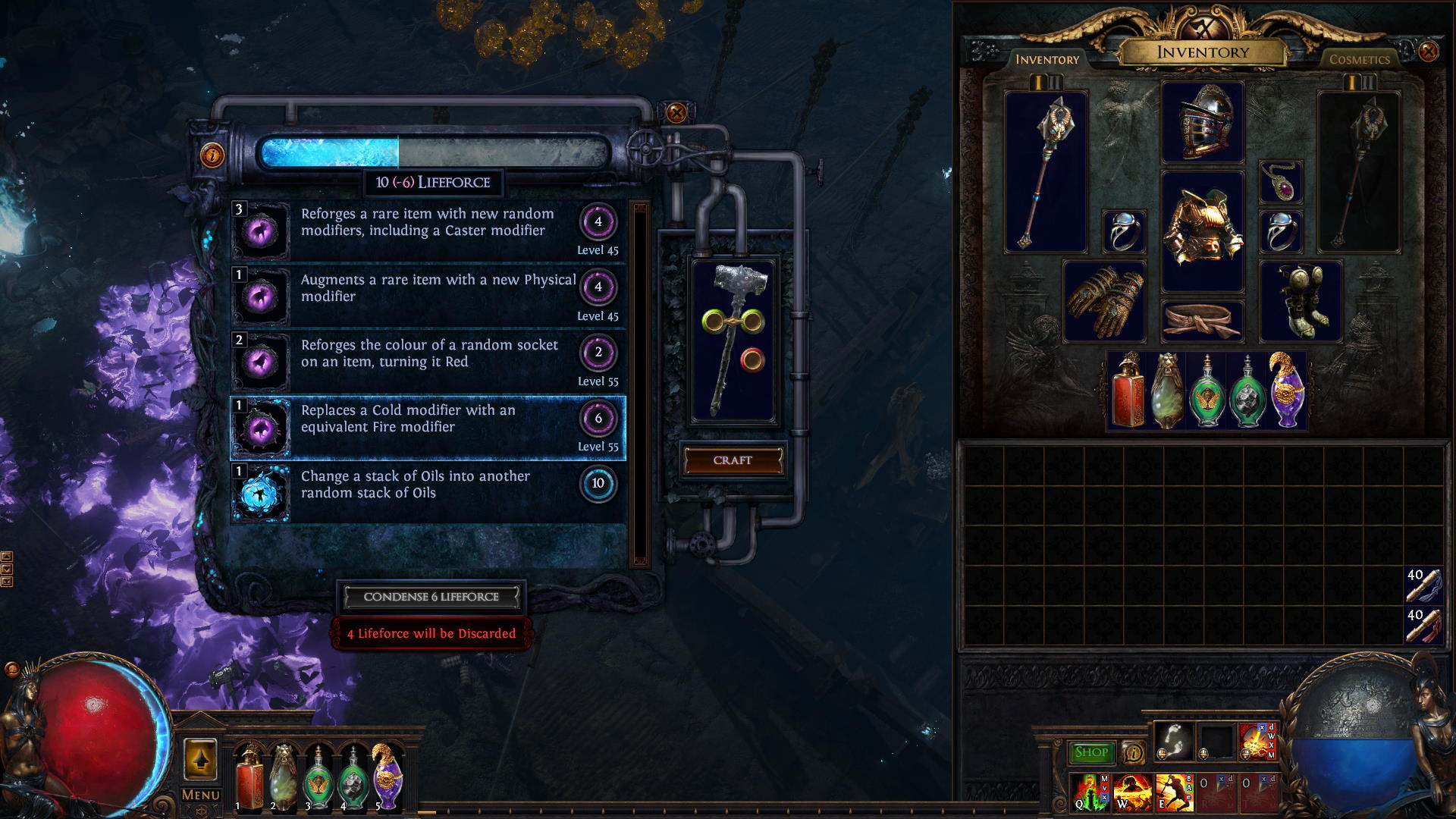 Grinding Gear admit they've got the basics down, but are still fine-tuning the mechanics of the Harvest league. They're balancing what percentage of your seeds you get refunded after a harvest and even considering an 'auto-plant' button for players who just want to fight. They're aware that some players just don't want to bother with a management minigame in the middle of their grimdark lootfest, but remain committed to experimenting with the formula. I'll admit that the novelty appeals to me, but the Path Of Exile community have rejected more fiddly leagues before, like the dungeon-building Synthesis.

The current league, Delirium, is also a tough act to follow. While straightforward (mostly just adding extra enemies and difficulty in exchange for huge loot), it has been a huge hit with the players. Unfortunately, it might have been a little too good, at least in terms of payouts, with unique weapons (the rarest item tier in the game) dropping by the fistful. Compared to the rest of the game, the loot was excessive - weird to say in an action RPG, but power inflation is a problem in the genre. Harvest appears to be designed (at least in part) to curb this, while forcing players to slow down and  think a little bit more about their gear. 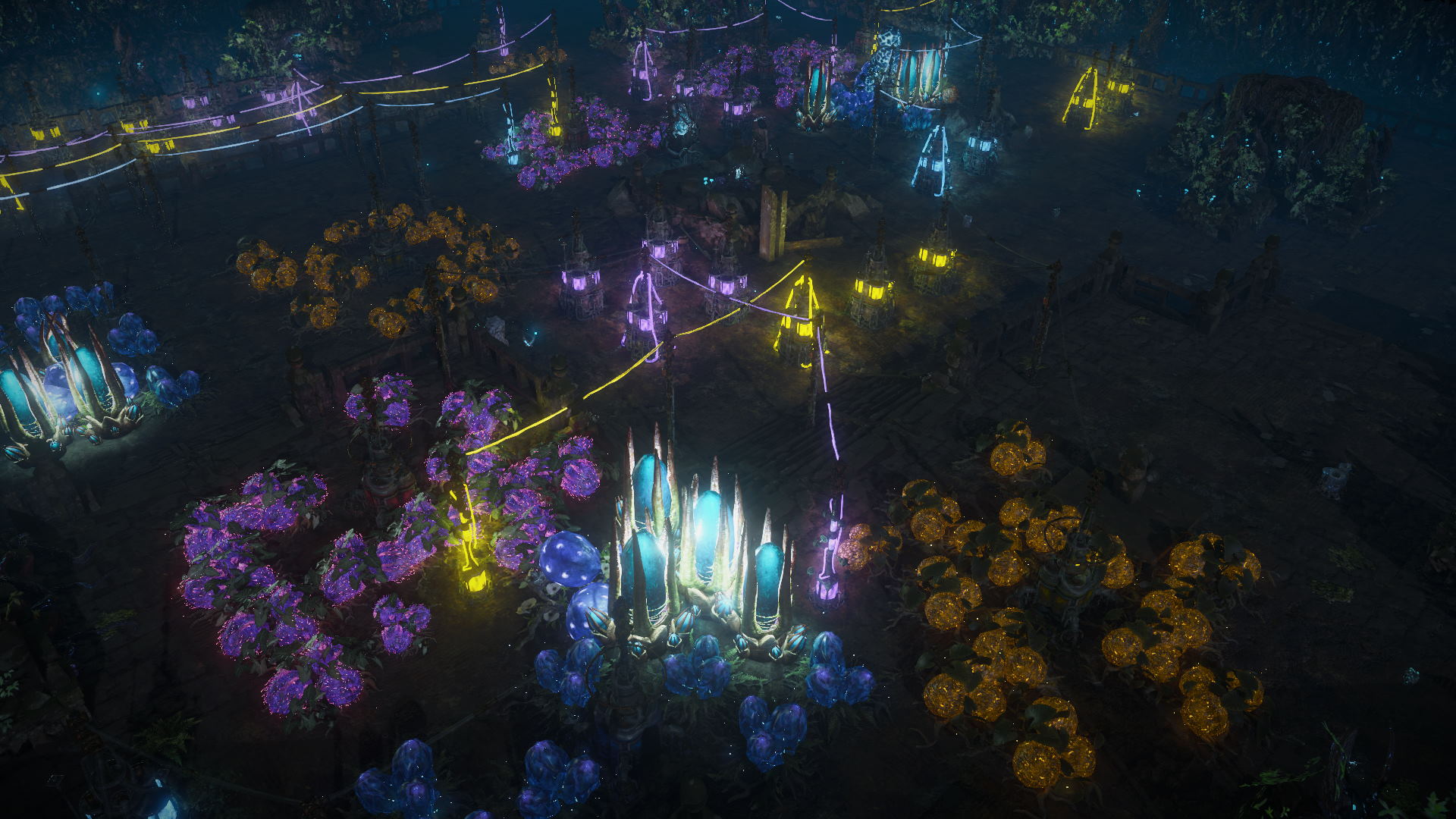 Of course, if you're not worried about gardening, there's a lot more on the way. More mechanical changes than usual, as Grinding Gear continue the iterative upgrades needed to transform the game into Path Of Exile 2. One system being overhauled is two-handed weapons. For a while now, the optimal strategy in Path Of Exile has been to dual-wield and crank your attack speed as high as possible. With Harvest, many skills are being rebalanced in favour of fewer, heavier hits, with the biggest impact coming from great-axes, hammers, and other big smashy/choppy implements.

Ground-slamming shockwave attacks are getting the largest overhaul, increasing their efficiency and range. A new support gem called 'The Fist Of War' also supercharges slam attacks, but has a small cooldown, emphasising fewer but bigger hits. They're also expanding and upgrading self-buffing Warcry taunts to be more viable offensively, and they'll now scale in power based on the strength of nearby enemies, rather than the number. The changes should mean you won't find yourself squeaking meekly when staring down an endgame super-boss, or bellowing uncontrollably when surrounded by fodder enemies. 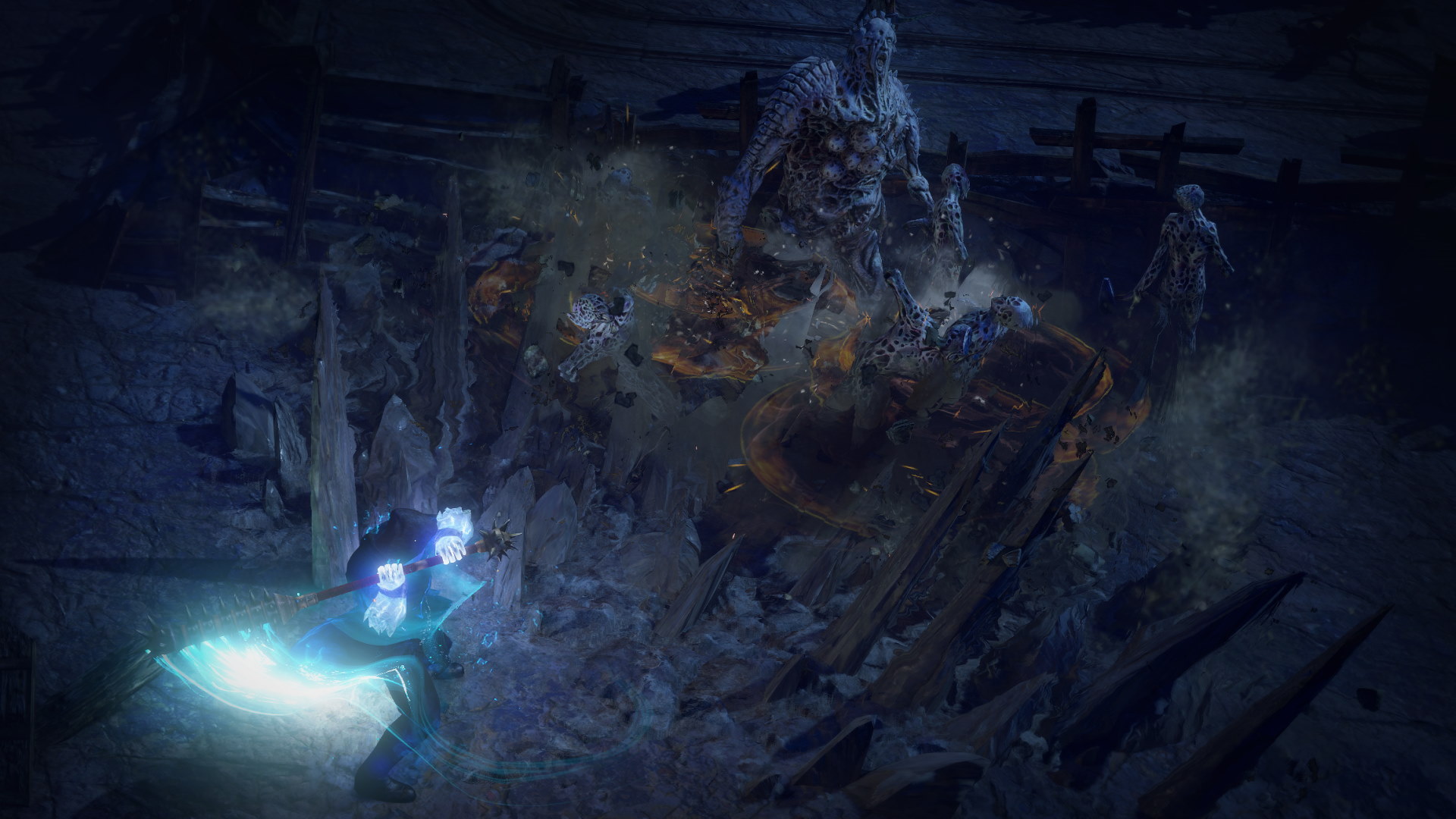 So, a complex and fiddly farming minigame and a refreshed and improved angrysmash experience are the two pillars of the Harvest update. Between them is a rework to Brand skills (magical limpet mines), a refresh for around fifty existing unique items, plus a handful of all new ones. I especially like the look of the Storm Secret ring, which massively upgrades the Herald Of Thunder spell to constantly rain lightning on nearby monsters, at the cost of doing lightning damage to yourself every time it happens. Effectively asking players to puzzle out how to turn that self-damage into an advantage, which is half the fun of Path of Exile's more exotic gear.

Lastly, it's been a while, but Grinding Gear are reshuffling the ever-complex passive skill grid with Harvest, with the intent to make some more exotic character builds easier to put together. As an example, the keystone skill 'The Agnostic' (which converts mana into a secondary health pool) has been moved from the far edge of the grid to nearer the Marauder class start point. Between that and the increased focus on huge smashy attacks, it's looking like a good time to roll a big dumb barbarian sort. Non-league players will be given a free respec, so have a chance to experiment with new setups early. 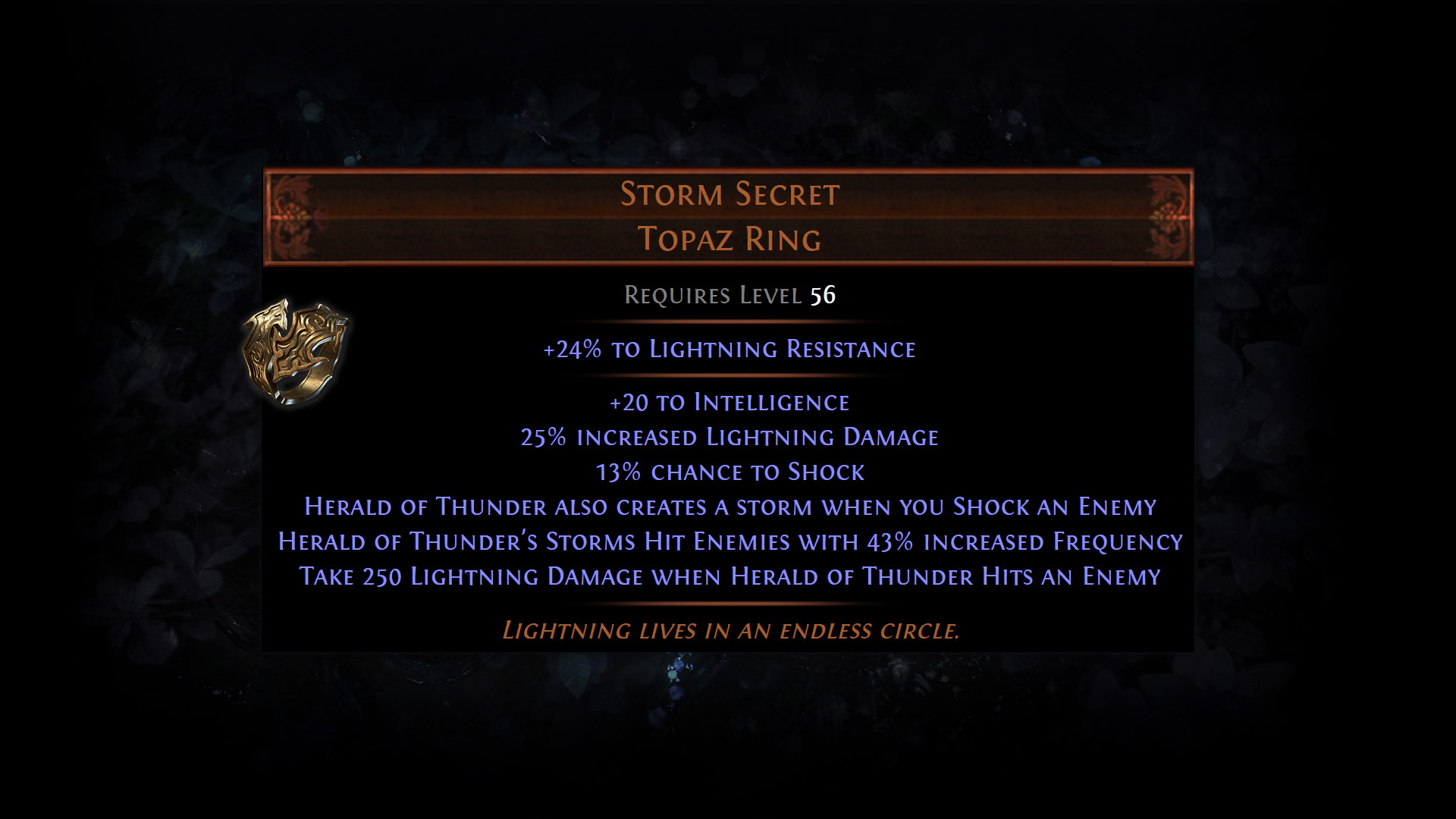 As for the Delirium league, it's being shuffled into Path Of Exile's ever-expanding endgame, with a twist. Because it acts as a fun difficulty and loot multiplier, Delirium mirrors will be far more common on maps generated using multiple sets of other league content. Sadly you won't see it much (if at all) before you dive into the Atlas Of Worlds, but it's just one more interesting wrinkle for high-level players to contend with.

Attentive players may have noticed that Harvest is launching a week later than their quarterly schedule would normally allow for. This is due to the studio re-adjusting to working from home during the pandemic. I was also told that Grinding Gear have been reshuffling resources to make sure the Christmas update doesn't miss its obviously immutable deadline. While I hate to be the bearer of bad news, the cloud lurking behind all these silver linings is that Path Of Exile 2 now seems very unlikely to launch in 2020, so don't go holding your breath for that. 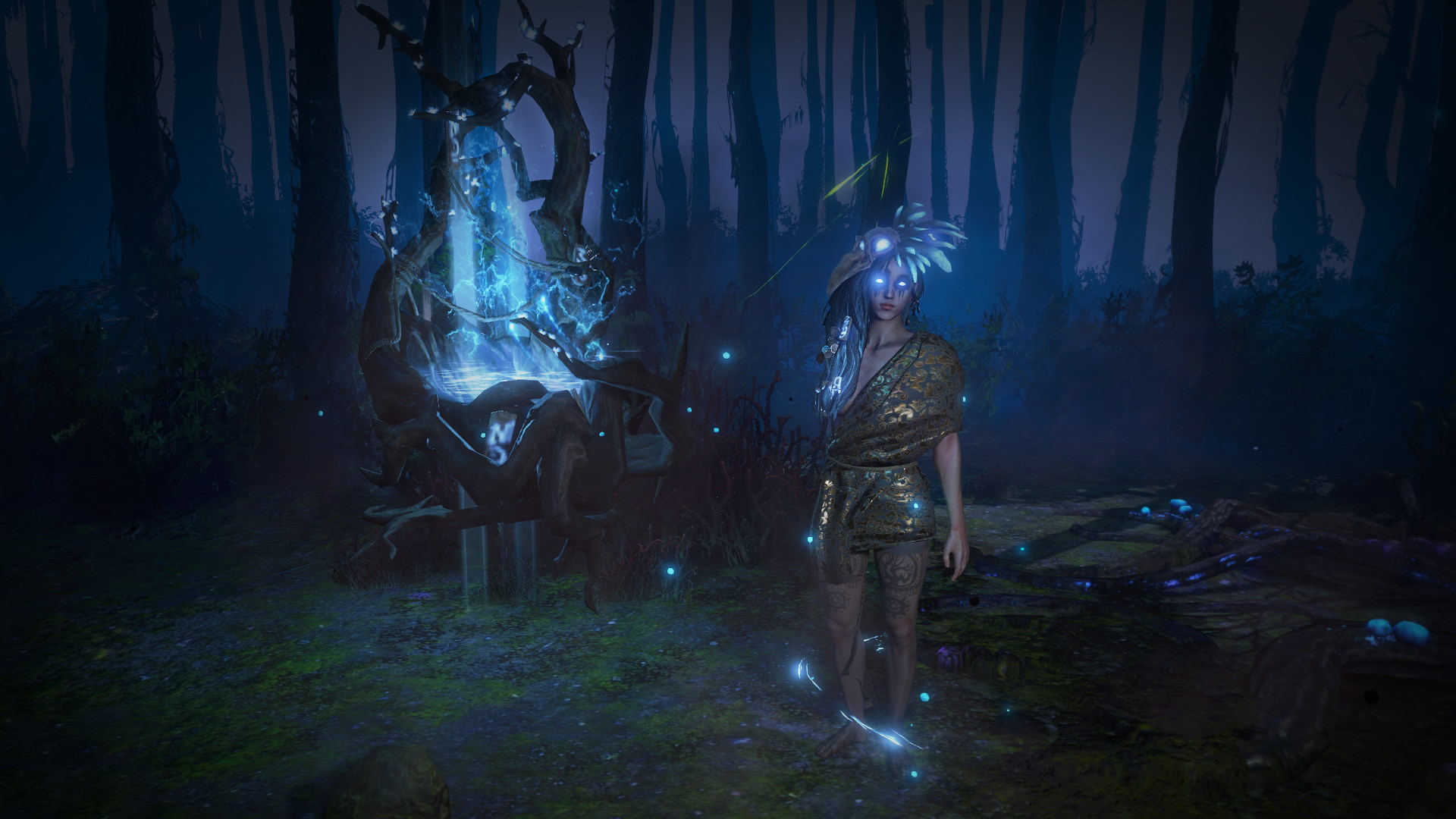 Still, I've got a nice note to end on here; Grinding Gear recently rolled out a patch containing an experimental new Vulkan-based renderer, and players report major performance improvements from it. The Vulkan renderer beta is live now and the Harvest league starts on June 19th.