Philips have unveiled two new gaming monitors today, the first (and literally) biggest of which is their jumbo and catchily-named Momentum 558M1RY, a huge 55in screen with a 4K resolution, a 120Hz refresh rate and a whopping great soundbar built into it courtesy of the high-end audio folks at Bowers & Wilkins. If you've ever wanted to play PC games in your living room, this might actually be a much better fit than a new 4K TV.

Massive gaming displays aren't new, of course. Nvidia have been trying to get their Big Format Gaming Displays (or BFGD) off the ground for absolutely ages, but so far we've had precisely one come out - the insanely expensive $5000 HP Omen X Emperium.

Philips' 558M1RY, on the other hand, is due to come out at the end of this month for 1299€, which works out to around £1175 / $1459 if you do a straight conversion (official UK and US pricing have yet to be confirmed), and is roughly the same price as a decent 4K TV. It doesn't skimp on features, either, as its VA panel has a full VESA DisplayHDR 1000 certification, meaning it can hit a peak brightness of at least 1000cd/m2 (like similarly priced 4K TVs), and it comes with a 120Hz refresh rate (over DisplayPort) and AMD Freesync support for smooth, tear-free gaming. It hasn't been certified as one of Nvidia's official G-Sync Compatible monitors yet, but Nvidia graphics card owners should still be able to take advantage of its variable refresh rate tech anyway, thanks to their universal G-Sync compatible (small 'c') driver. 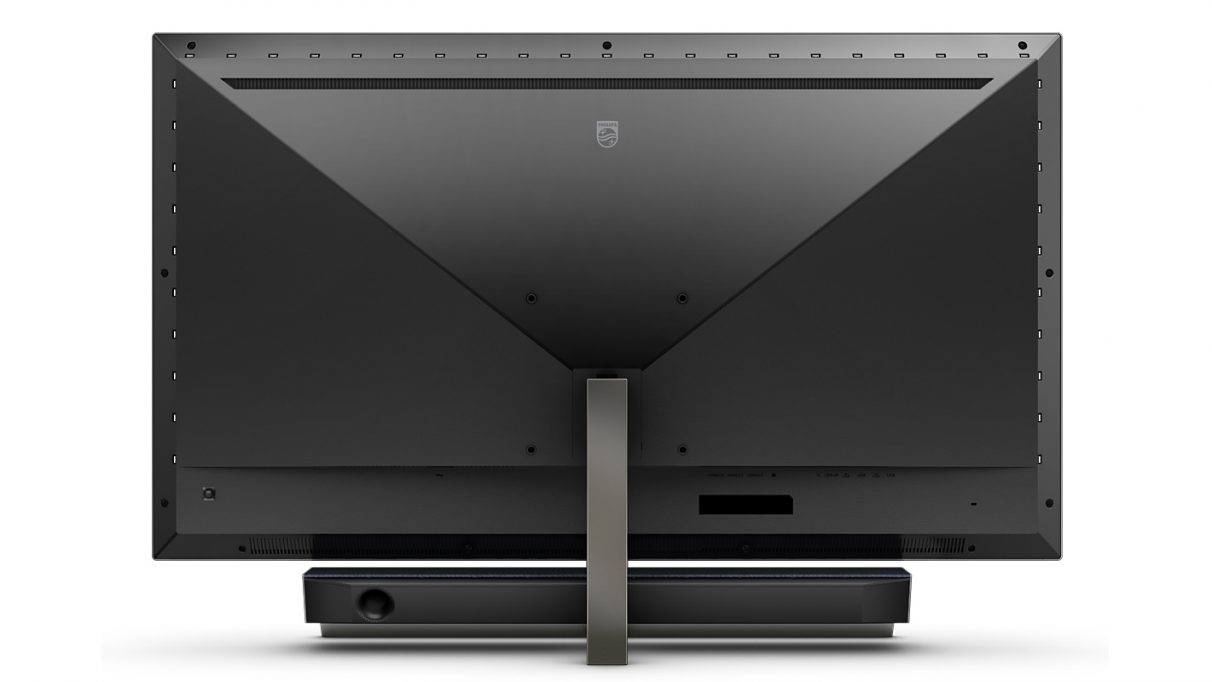 The 558M1RY's biggest attraction, though, is obviously that Bowers & Wilkins soundbar, which is built into the monitor to help beef up its audio experience. Covered in a premium, wool-blend fabric created by Danish textile company Kvadrat, the soundbar is a 2.1 channel system (that's two speakers and an integrated subwoofer) with DTS Sound support and customisable EQ settings. Its 40W power output isn't massive, all told - the very best soundbars are often 300W+ - but it should provide a decent audio experience nonetheless, and at least it means you won't have to factor in the cost of additional speakers when you first set it up.

The Philips 558M1RY has lots of ports and connections, too, including one DisplayPort 1.4 (vital if you want that 120Hz refresh rate at 4K), three HDMI 2.0 inputs, and four USB 3.2 ports (two of which support fast-charge) and a headphone output, which is again pretty on par (if not better) than most 4K TVs.

And because it's a Philips display, you also get their reactive RGB-ified Ambilight technology built into the back of the monitor. In case you're unfamiliar with Ambilight, this analyses the main colours on-screen and projects them 'beyond' the bezel of the monitor onto the back wall to supposedly increase immersion. It's not for everyone, admittedly, but you'll always be able to turn it off if you find it too distracting.

Either way, that's really not bad for roughly £1175 / $1459, and it's probably well worth considering if you don't really use your TV to watch TV any more.

As for Philips' other newly announced monitor today, this is a 27in 4K esports monitor called the 278M1R. It only has a 60Hz refresh rate, but Philips hope the monitor's ultra low input lag will make it an attractive option for competitive FPS games - although if you ask me this sounds like the exact opposite of every other esports-oriented gaming display right now. This one will be coming in July for 449€ (around £400 / $500).