The small Playerunknown's Battlegrounds map of Sanhok is being revamped as part of Update 8.1 next week, developers PUBG Corp announced today. Numerous locations have been rebuilt, and an interesting new mini objective has been added. Autonomous Loot Trucks will be driving around the island, dropping crates of gear as they're attacked, and awarding particularly fancy gear when they're destroyed. Chasing a robopiñata in my tuk-tuk while the laaads in the back blast away sounds great fun. Today's announcement also brings a big boast: the battle royale shooter has now sold over 70 million units.

So, up to four Loot Trucks will spawn at the start of a Sanhok match, and new ones spawn as they're destroeyd. These armoured autonomous vehicles will drive themselves around, and drop crates of equipment as they take damage. When they're finally destroyed, they'll drop a lot of high-level gear, potentially including decked-out weapons which have special skins and names. But they're tough, and fairly obvious targets for all players. It'll be interesting to see how a secondary objective like this changes the shape of matches.

The Update 8.1 patch notes explain the map has "been reworked from the ground up to look better, perform better, and offer more balanced gameplay." The devs explain, "We wanted Sanhok to feel more like a forgotten, overgrown paradise while addressing some of the most glaring balance issues we've seen over the last couple of years." I like some of the changes. Here's the before/after for Ruins: 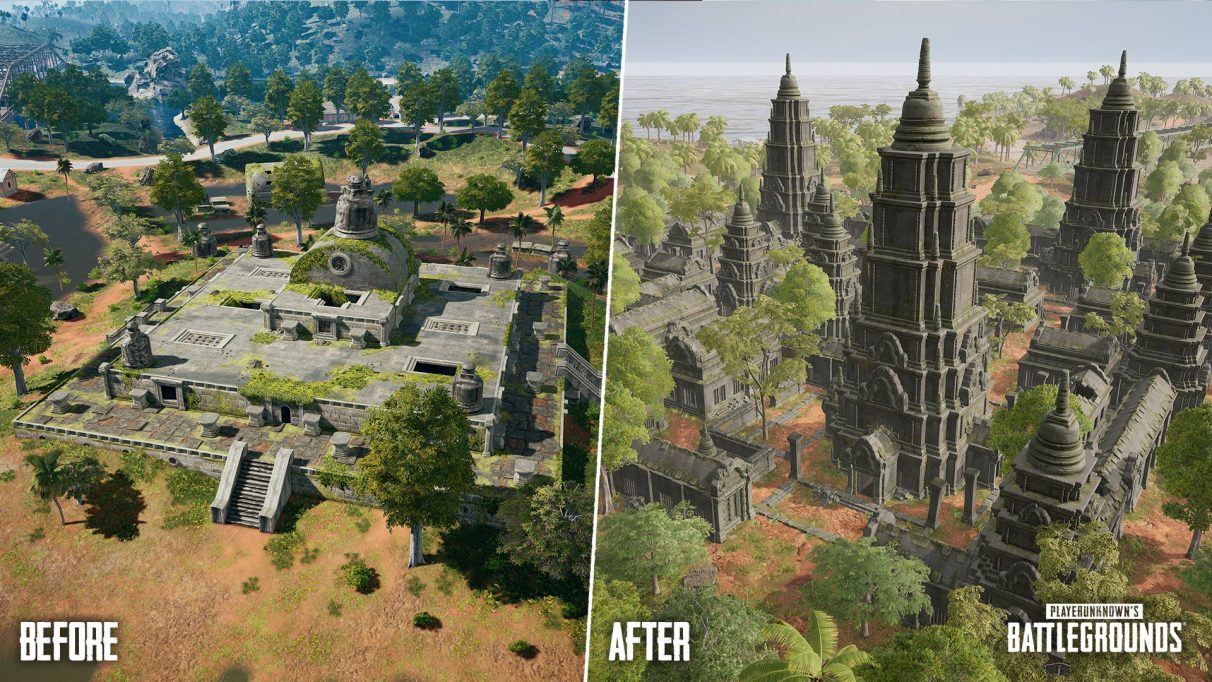 And supporting my heartfelt belief that the game is about rowdy stag & hen weekends, Sanhok's docks have been replaced with a row of tacky tourist bars, including the Black Cat Club and the poolside bar Lucky Dans. 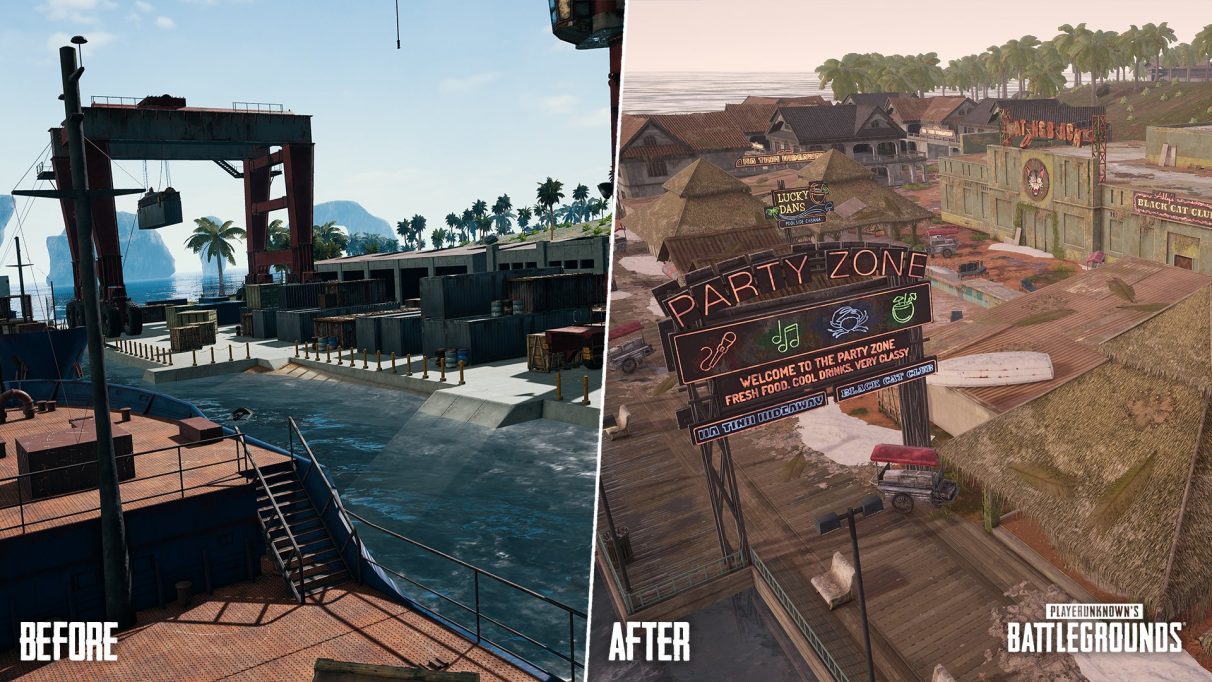 Other changes... while I respect the reasons behind them, I don't like the new flavour. The frame festooned with flags at Bhan, for example, is gone. "While a cool locale, Bhan was underused and a pain to loot," they explain. "We've removed Bhan and replaced it with a normal set of houses so that we can focus on using those resources for unique locations elsewhere. Due to the more simplified and familiar building layout, this area should now be a more defensible position to loot and control." And that's understandable but... feh. 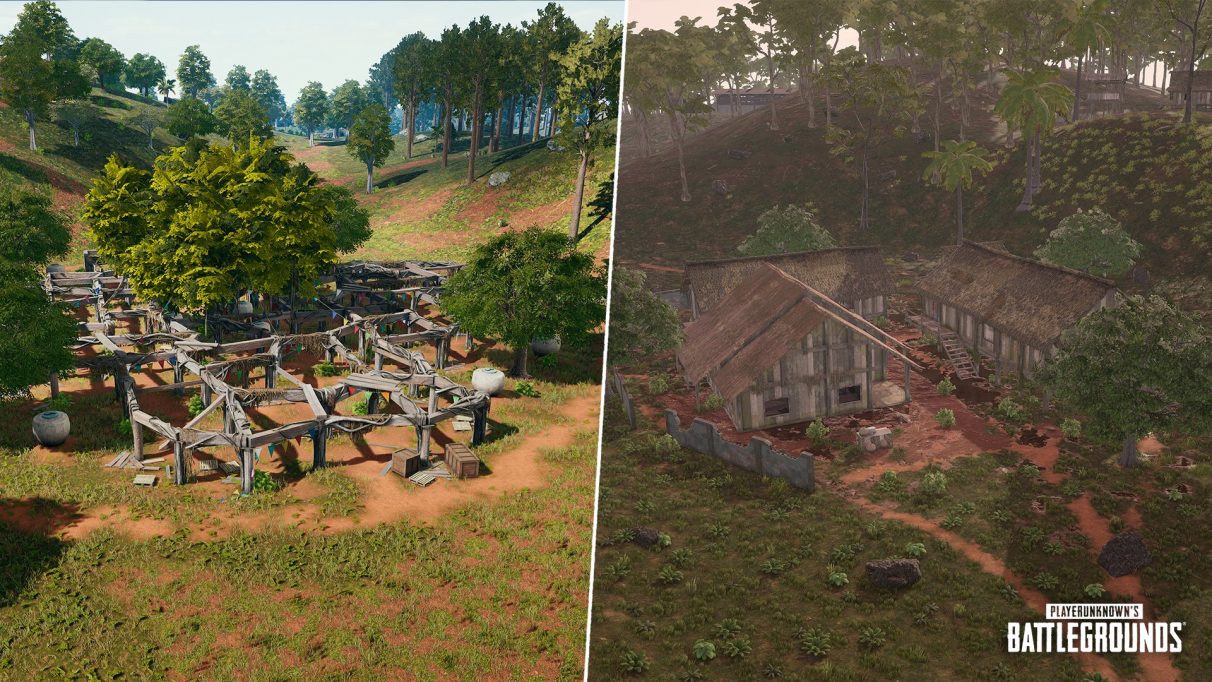 The gas can changes originally planned for Update 7.2 will finally arrive in 8.1 You'll be able to pour puddles of petrol that can be ignited, handy for traps, and hurl cans around too. A smattering of other changes, fixes, balance tweaks, and performance improvements are due in the patch too.

Update 8.1 is due to launch on July 22nd, which will also be the start of Season 8. If you fancy a go before then, the patch will hit the public test version on Wednesday.