Actual deaf people have played The Quiet Man and found it very much wanting; when you play it you clip into almost every surface available and during fights may suddenly teleport from one punching animation to another with a block of frames missing in between; the main character Dane isn’t a Quiet Man at all and he actually makes a lot of noise. Yes, sure, all that is true. You’ve seen everyone tear into it already, and say why you absolutely should not buy it until it’s approx. £3. But I also want a go doing that.

Human Head Studios’ interactive movie punch ‘em up (complete with live action bits) is largely devoid of sound, to reflect the deafness of protagonist Dane. But a few days from now the game will be receiving a NG+ update that lets you play the main story again, but with sound this time. And it is my solemn plea that you never, ever do that.

There are serious reasons to not play it at all, of course, expanded on in One Odd Gamer Girl’s review linked above. In one of three developer letters, producer Kensei Fujinaga says that the concept at the core of The Quiet Man is casting aside words and thinking about whether we “were able to understand one another through connections formed heart to heart, soul to soul, and could once again look into one another’s eyes and form a bond so pure?” From this I assume that Fujinaga believes deaf people are magic, or the human form of the galaxy brain. This assumption is supported by events in The Quiet Man.

My argument today, however, is from a different standpoint, which is: there is no reality I can imagine where knowing for sure what happens in The Quiet Man improves it in any way. Spoilers ahead, if you were raring to play it unspoiled.

The Quiet Man is a kind of masterpiece because so many people who are good at their jobs were involved with this at every stage, and at no point did one of them say, “Hey everyone, is this actually terrible?” Like nobody, during a meeting, was like “Are we sure none of this is too much? After the reception Quantum Break got, is this the title that’s going to succeed at blending live action video seamlessly into a game?” Adding audio that pretends to clear up plot holes - but will in all likelihood still leave some big enough to drive buses through - is not going to help.

The one piece of dialogue you hear for sure in the game, before fully inhabiting Dane’s world, is an exchange with some ruff and tuff lads in an alleyway. Much of this exchange is, and please interpret this word using its full range of meanings, amazing. 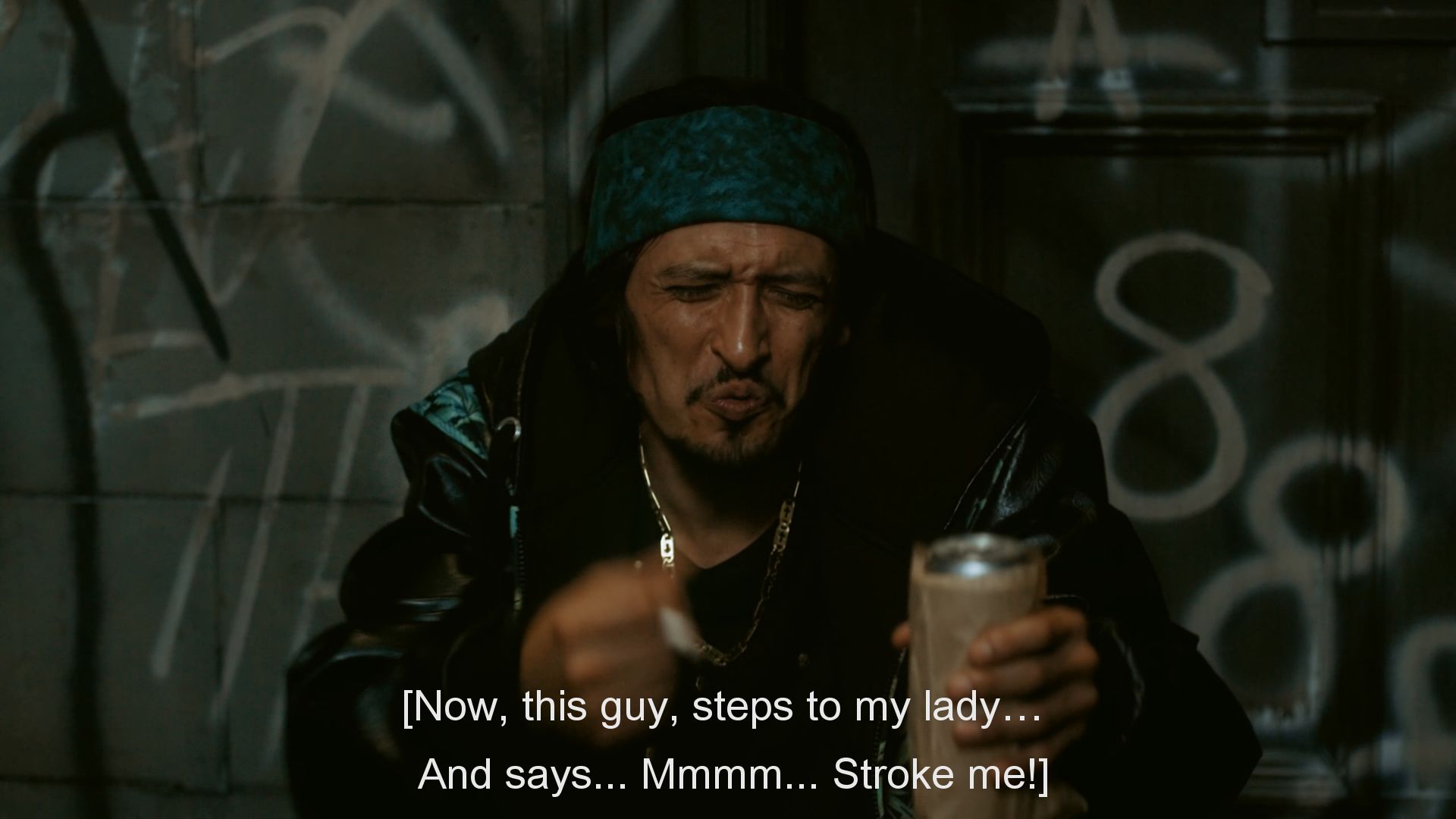 There is no version of the game with more of that dialogue that is the improved version. Dane steals a bunch of cocaine from these dudes, and someone will definitely say “koh-CAY-een” in the version with sound, ese. Having sound doesn’t matter, because you can pick up most of the plot anyway, like when I watched the movie 2012 on a plane and the screen and headphones were broken:

Dane is deaf. His mother was accidentally shot when he was a kid, as a black teen and a latino teen fought over some new trainers, a scene that was shot and edited and included in this game on purpose. Everyone involved spiralled into a life of crime. His best friend and now apparent employer, Taye, is a gangster, while Dane beats people up for him, and the third kid involved in the shooting is the leader of the gang of aforementioned alley lurkers. The exception is a police detective who looks like Bruce Willis by way of Phil Mitchell; he is either Dane’s literal or metaphorical father figure, but the distinction is almost meaningless for the story. 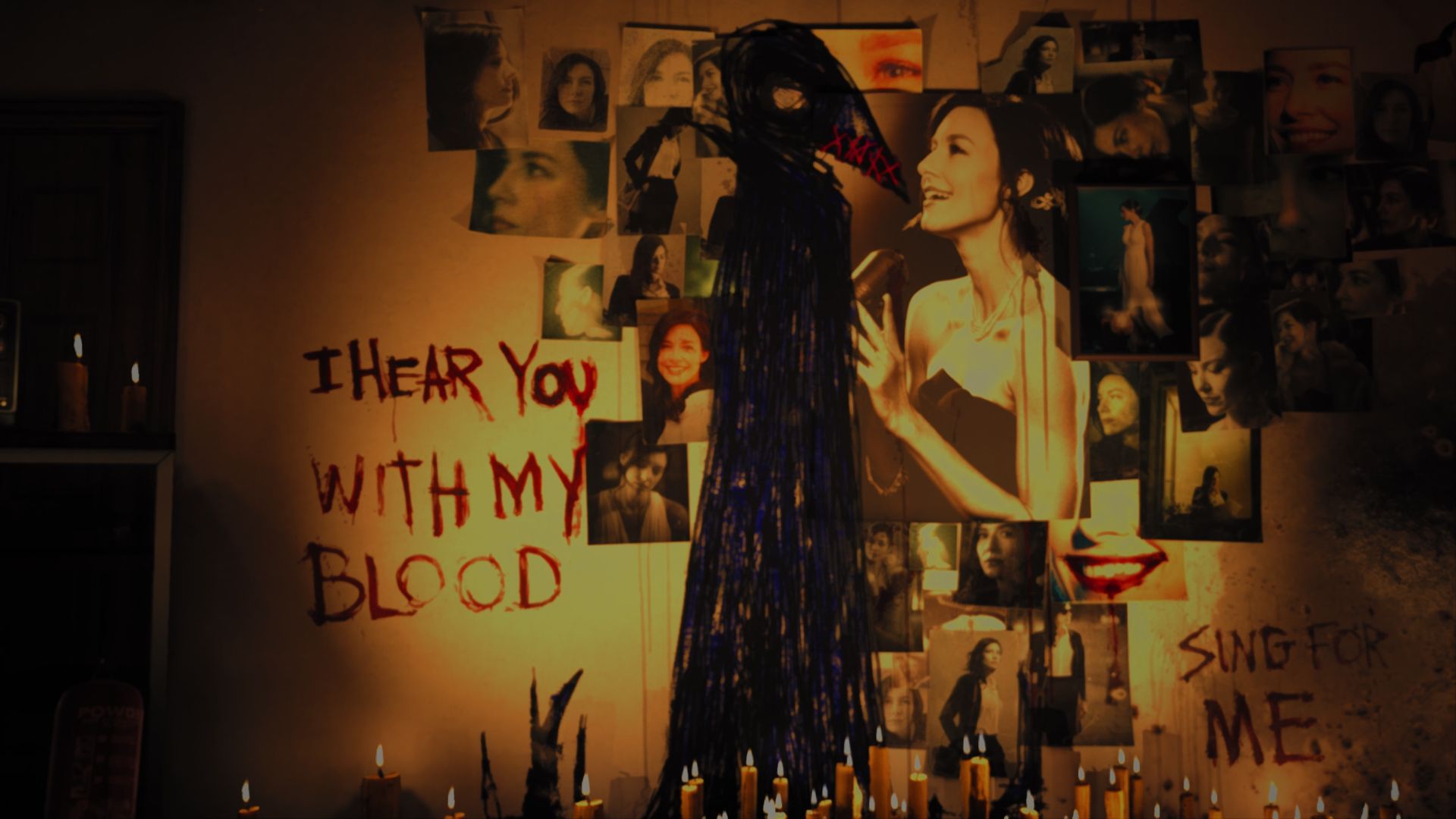 Taye has a girlfriend who’s being threatened in a Hollywood-voodoo kinda way - dead birds, you know the vibe. Dane fights his way around the same few buildings in New York, chasing down the Bird Man (a man in a bird mask) who has a creepy culty obsession with the unnamed lady, as demonstrated by his weird Bird Lair. Eventually Taye goes off cracked and ties up his girlfriend on a roof, for some reason, and Dane defeats him and the Bird Man whilst also confronting inner demons. The end. Those are the facts we know. But the facts we don’t know are also better without sound, because they are open to liberal interpretation.

The first kicker that I haven’t mentioned yet is that Taye’s girlfriend is a pianist, and is the spit of Dane’s mother. Which is where the liberal interpretation makes The Quiet Man way more interesting than the truth will ever be. My reading is that Taye gets really angry at both his girlfriend and Dane due to their betrayal, i.e. these two have definitely been getting busy behind his back, because, fuck, man, the framing is a bit much for a platonic relationship. Shots of present day mum-crush cradling Dane are intercut with shots of latter-day dead mum doing the same. He is constantly conflating his memories of his mother with this woman’s actions in the present. It’s weird, dude. 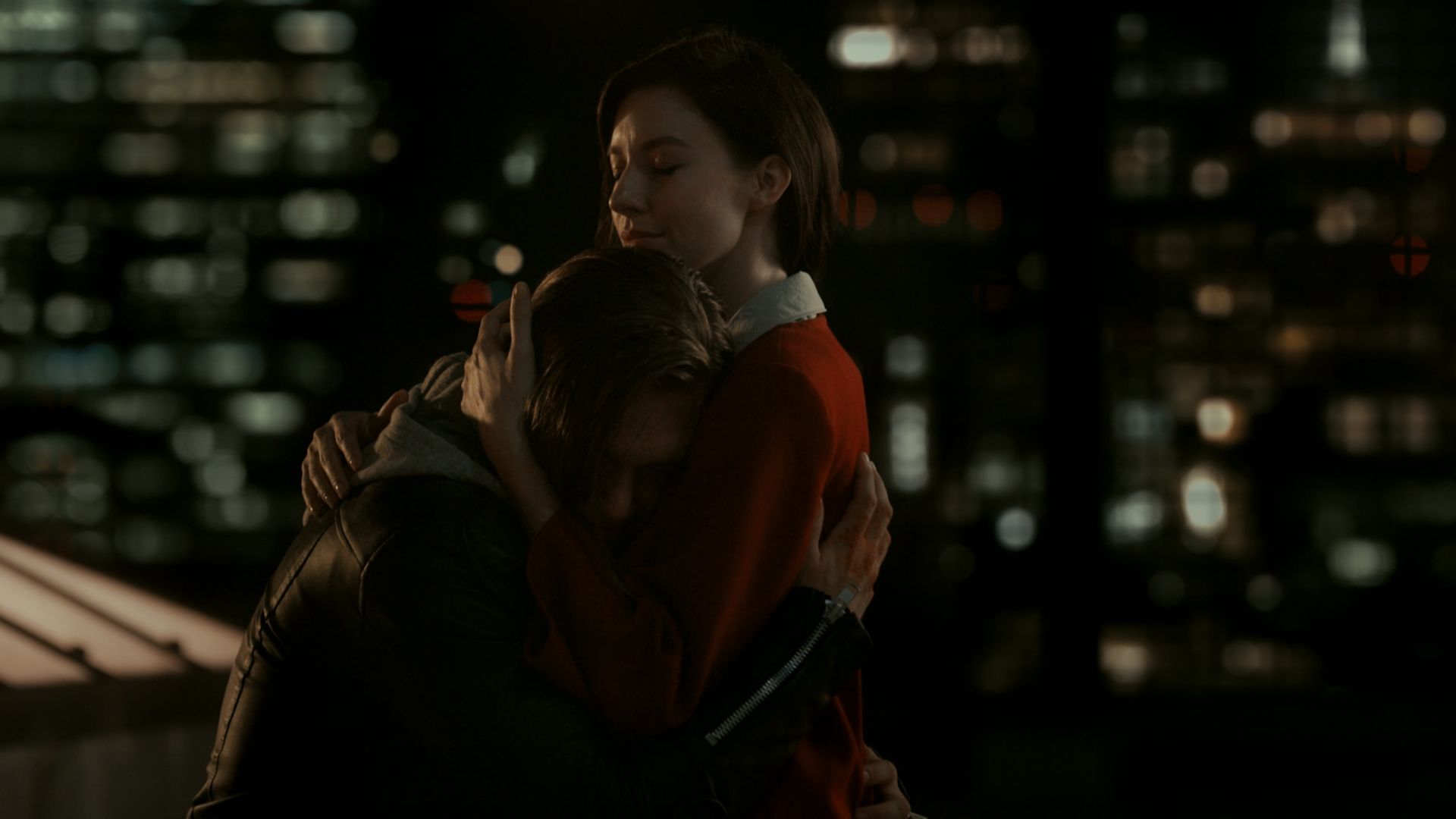 Secondarily, and even betterly, there is a bit at the end where Dane is briefly literally actually magic. In turn it seems like the Bird Man may be the gang leader, then Taye, then, in an unsurprising twist, Dane himself, before turning out it was your father figure police detective. Which actually was surprising, because if you were asked “What is the most nonsensical plot move this thing could do right now?” then you would respond: “It turns out the bad guy was the police detective all along, the one that just got shot in the back a few minutes ago, and now there will be a final boss fight with him.” The Bird Man mask seems to be part the Mask mask from the movie The Mask, because whoever is in possession of it goes bit weird, and part the Crow from the movie The Crow. because when Dane puts it on and is shot by Taye he becomes an invincible smoke bird monster. 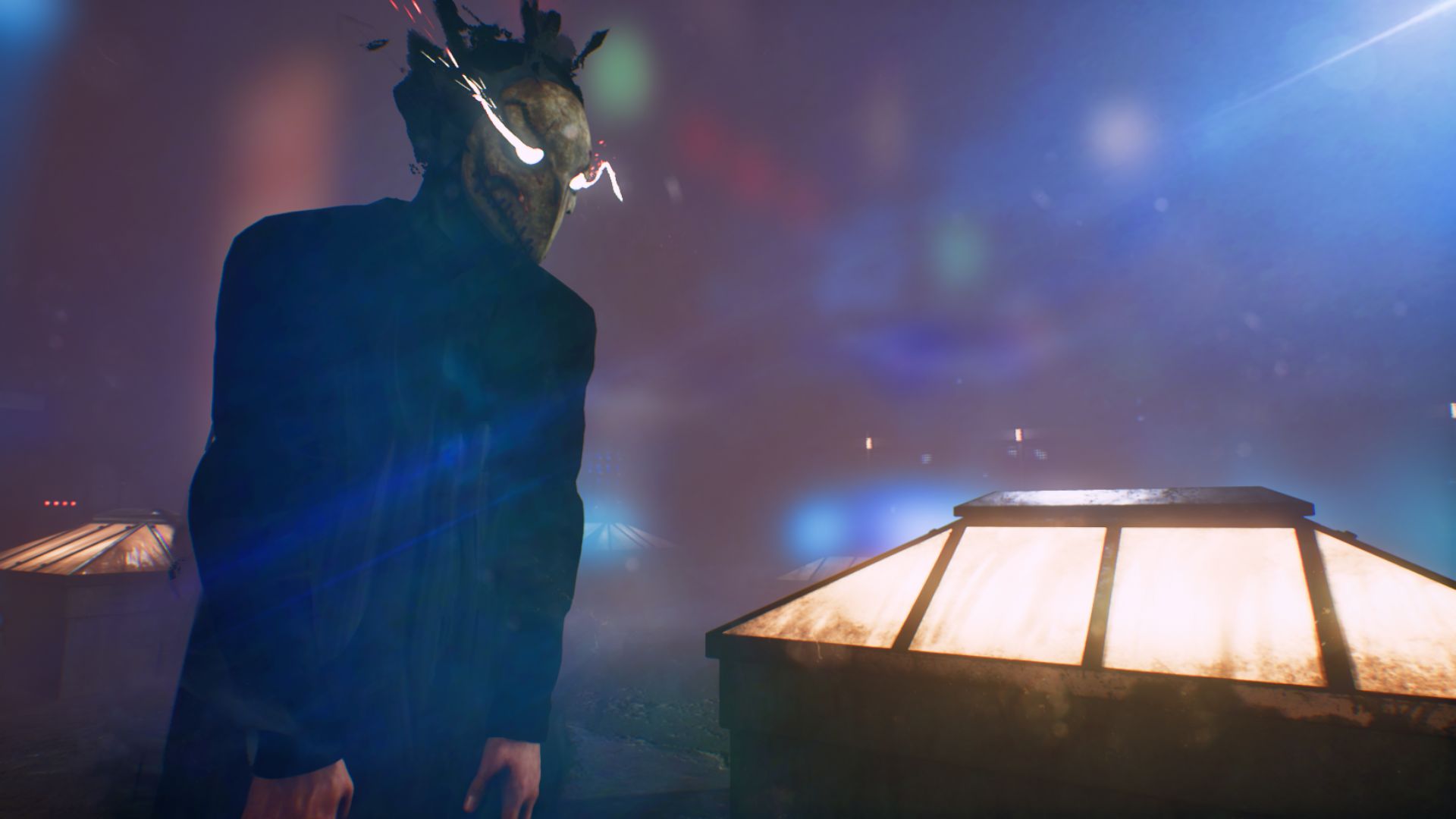 This increases the already difficult motion blur on-screen in fights to near-indecipherable levels. 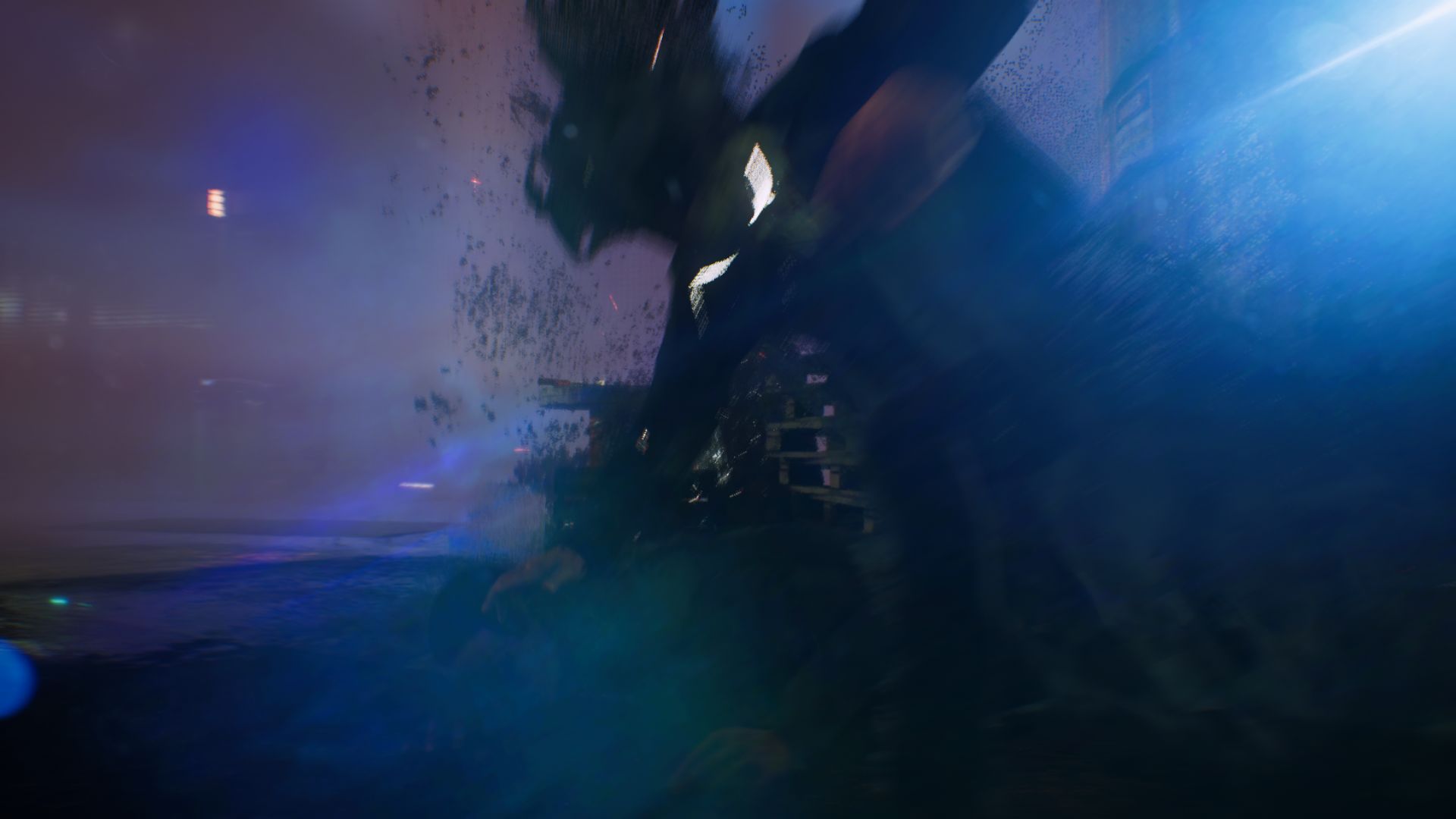 After this Dane reverts to being normal again...? I choose not to interpret this as a manifestation of his childhood desire to protect his mother that he ultimately failed at (and now has a second chance at because of his mother-girlfriend’s plight) but rather to read it literally. In the game world, therefore, both deaf people and masks have magic superhero abilities. This does not change the fact that he was shot in the back, however, and the final fight in the game, where both characters have been shot, is thus like two tired drunks flailing at each other and falling over in the carpark.

And the best part is that this is only my interpretation! You can come up with your own! Maybe the mask is a haunted one that possesses people. Maybe Bird Man is like James Bond, and there are loads of Bird Men. Maybe it was all a dream! Maybe the game isn’t full of stereotypes! Without sound, anything in The Quiet Man is possible. Because the thing is, a wildly over-the-top and weird Oedipal vigilante smoke bird monster is way better, more interesting and less offensive than whatever version of The Quiet Man with sound is about to arrive.