Playerunknown’s Battlegrounds has inspired a lot of battle royale romps since it hit Steam a year ago, some of which have gone on to carve out their own gigantic niche. Then there’s the Plunkbait; the small games that are more overtly attempting to ride its coattails. Graham refers to them as limpet games, which I rather like. While there are plenty of shameless copycats, some are sincere experiments and twists on the Battlegrounds formula; some aren’t even battle royales at all. What follows are Plunkbat’s most interesting or unusual odes, riffs and copies. 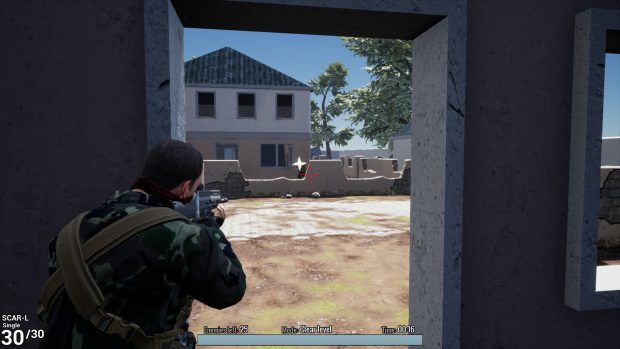 Battle Royale Trainer (and to a lesser extent PUBG Training Camp) is fascinating. It’s a game designed to train you to become better at a different game. It’s a niche need that I didn’t know existed, but judging by the several aids that have cropped up on Steam (and not just for battle royales) it’s pretty well catered to.

Plunkbat undergraduates can hone their skills with the weapons and attachments normally found scattered across Erangel and Miramar, fighting bots or shooting targets in maps based on Plunkbat’s. Unfortunately, it hasn’t quite matched the bullet physics or weapon-feel, and sniping in particular is nothing like the real deal.

There’s a sort of grim determination that I can respect in people who are willing to spend hours in what is a tension-free, zero-stakes training sim -- in their free time, inexplicably -- so they can perform a bit better in the game they actually, presumably, enjoy. But it also makes me wonder what other ‘support games’ could crop up. Maybe a deprogramming game to help wean people off chicken dinners? 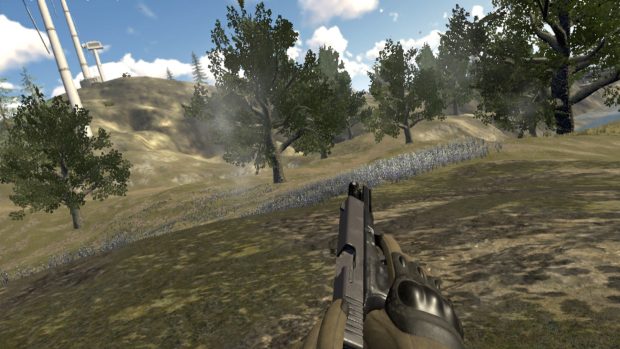 Despite sidestepping some of the more obvious brand-pinching you’ll see often in this list, Stand Out still owes plenty to Plunkbat because it’s essentially Plunkbat in VR. The map itself is broadly based on Erangel, and you’ll see plenty of familiar weapons and mechanics, but a narrower field of view and a smaller map.

It’s a different way to experience Plunkbat and battle royales, putting it head and shoulders above a lot of copycats. It also fills a gap in VR, seeing as there aren’t a whole lot of solid multiplayer shooters knocking about. It is still in early access, though, and it’s currently missing co-op. It also leaves a bit to be desired, presentation-wise. 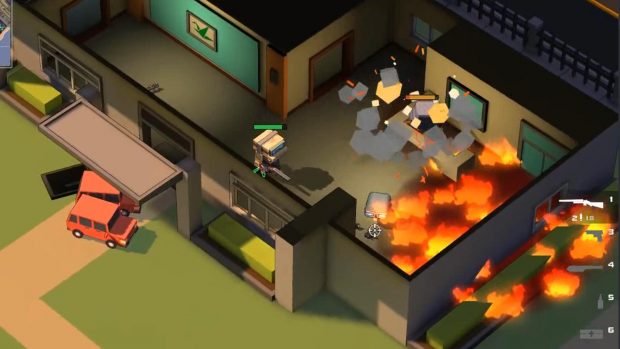 Plunkbat is a little grim, isn’t it? Its huge, deserted warzones suggest the now dead or fled inhabitants subsisted solely on painkillers, energy drinks and miscellaneous cans of food, and their only hobby was collecting shotguns. The new inhabitants are even worse, and are only interested in killing each other. Mini Battlegrounds is considerably more chipper, though just as violent.

It’s an isometric battle royale infested with cute, cube-headed combatants. I’m a big fan of games that flip a genre’s conventional perspective -- hence my love of Smite -- and the switch here brings with it some fairly substantial changes to the Plunkbat formula. The source of tension changes, for instance. Instead of being worried about being sniped by a hidden foe from miles away, you’re more worried about what’s on the edges of the screen. The isometric view also lends it a more tactical feel, even if it’s really a hectic free-for-all. 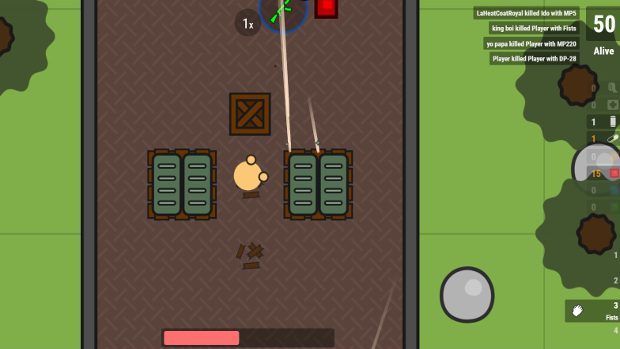 Alternatively there’s the more minimalist Suviv.io, a free-to-play bit of Plunkbait that pits players against each other in top-down battles. While it looks extremely simple, it adds a few wrinkles of its own, including destructible walls and ricocheting bullets. And the classic explosive barrel makes an appearance, too, making it just as, if not more, chaotic and messy as its 3D cousins.

Fights in Surviv.io are obviously close-range affairs, just like Mini Battlegrounds, with little blobs constantly moving, strafing and dancing as they try to avoid the spray of bullets. It can be twitchy and frenetic, and battles are short-lived affairs compared to the sagas of Plunkbat. 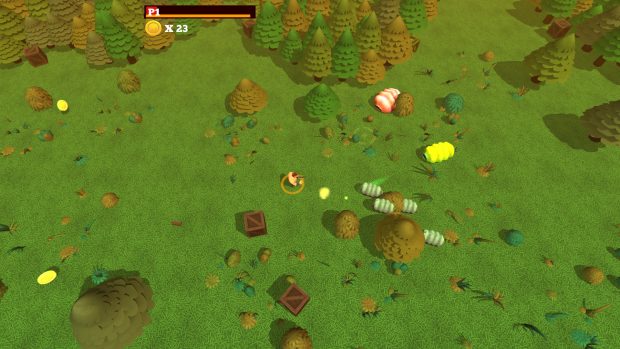 In a timeline without Steam Direct, Friendly Fire wouldn’t have a ridiculous prefix and would probably be someone’s first game project. It’s a co-op, top-down shooter where you fight beetles. But because anyone with $100 can get on Steam, and because we’re in the midst of a phenomenon, Friendly Fire is now PLAYERUNKN1WN: Friendly Fire, an extremely cheap Steam game with no relation to Plunkbat at all.

Friendly Fire also comes with 500 achievements, which you get for every second you stay in the game. It’s eye-rolling stuff, but I do wonder if it’s a genuine attempt to get more eyes on the game at a time when there’s so much competition that it’s next to impossible to stand out. Ultimately it garners the wrong kind of attention, but Friendly Fire and the like are all arguably reacting to an ecosystem that Valve created.

This is just one of many games going to embarassing lengths to get some of that Plunkbat attention, often in ways that don’t actually work, and it doesn’t even have the worst name. I’m rather partial to the criminally bad Gamers Unknown Survival, but credit where credit’s due, PLAYERUNKN4WN Zombie is also awful. 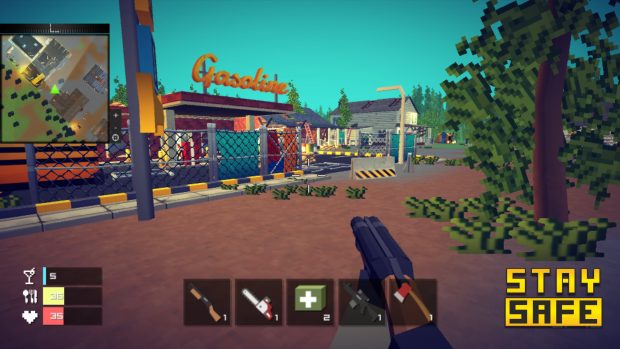 Battle Pixel’s Survival Ground is only notable as an example of how much you can get away with when you sell your game on Steam. If you look at the release date, you’ll probably wonder how a game that appeared in 2016 could possibly be a Plunkbat copycat. Back then it was actually a DayZ copycat, and it still very much is, but when the popularity of Plunkbat became clear, the developers changed the name, branding and description so it could siphon off some of the battle royale crowd.

In 2016, it launched as Pixel Day Gun Z, but in December last year the developer changed the name and store description, scrubbing any mention of zombies, replacing it with “battle royale”, “Blue Zone” and anything else that might make it sound more like Plunkbat. In-game changes were less dramatic and its zombie survival conceit remains. 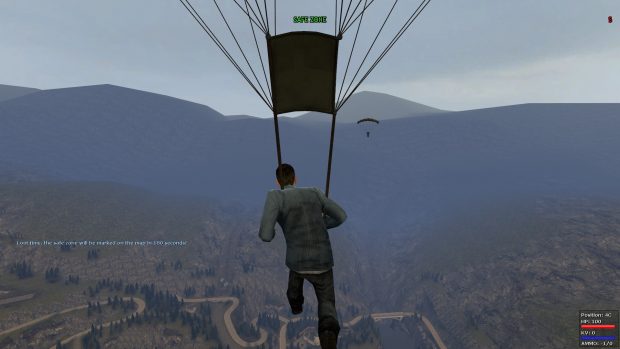 This one doesn’t belong above because it’s actually older than Plunkbat and was inspired by the Arma 2 Battle Royale mod, also made by Brendan “PlayerUnknown” Greene, and created in Garry's Mod. It deserves mention, though, because it captures the spirit of Plunkbat and its predecessors in a way that most Plunkbait games don't. It's a free mod originally made by its creator just to play with their friends, but it's in a considerably better state than the majority of Steam copycats. Those are Plunkbat’s roots, too, in the mod scene of Arma, before the loot boxes and lawsuits. 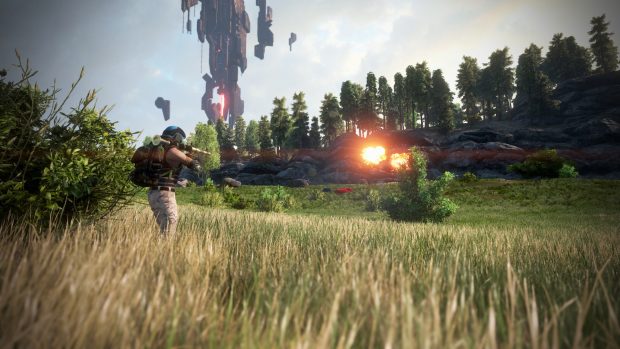 Fortnite might be the most notable free-to-play battle royale, but Last Man Standing was considerably quicker off the bat. It launched on Steam just after Plunkbat, and while the two are pretty similar, its inspirations are the games Greene worked on before, namely the Arma Battle Royale mods and H1Z1. A year on, there are still enough players to get some matches going, and it’s probably got more active players than any of the other games on this list.

If Plunkbat had come out a few years earlier, I doubt we’d see nearly as much Plunkbait. They’re very much of their time, where myriad accessible game engines, loads of cheap assets and a huge store that’s willing to sell just about anything have removed countless barriers to game development. Few are good, or even briefly fun, but they also sometimes show us the first fumbling attempts of new game devs, as well as the occasional experimental endeavour to grow a nascent genre, and there’s something appealing about that.