If you click on a link and make a purchase we may receive a small commission. Read our editorial policy.
Premature Evaluation is the weekly column in which Steve Hogarty explores the wilds of early access. This week, he's become a titan of industry in retro futuristic factory sim Good Company.

Ah, industry. You gotta love it. Men with twirly moustaches posing in front of giant chains. Women standing next to teetering piles of code used to send astronauts to the moon. Countless ghosts of mangled Victorian children haunting the greased cogs of matchbox factories. Elon Musk riding atop a tiny submarine like a cowboy to the bottom of the Mariana Trench to rescue his frisbee. Humanity is at its very best when it’s building, designing and producing the vast quantities of plastic garbage demanded by the growling and insatiable stomach of our sexy benefactor and god, global capitalism.

Good Company is a tycoon factory builder in which you play the role of lead architect, CEO and engineer of a series of growing electronics startups. It’s vaguely set somewhere in the golden age of American innovation, back in the mid 20th century when General Electric wasn’t the slowly desiccating corporate megalith it is today, but rather was at the bleeding edge of invention, its research and development departments attracting the brightest engineers from around the world to come up with brand new ways to make toast. 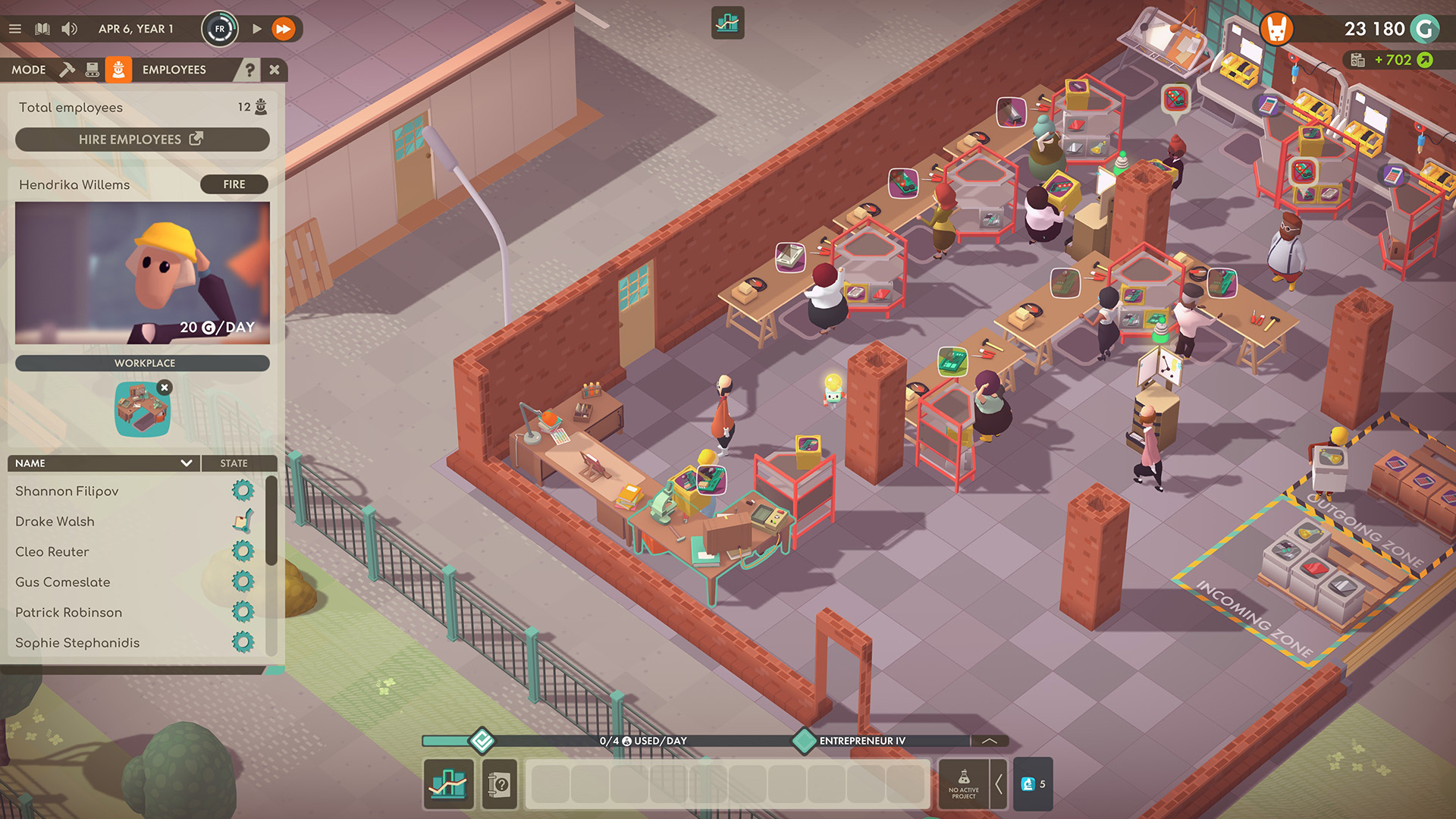 There’s also a sprinkle of retro-futurism in the form of friendly robotic sidekicks and wild mechanical automation, the kind of magical metal reality dreamed up during the dawn of the age of convenience, when housewives were being promised liberation from the drudgery of chores through fantastical new machines like self-cleaning microwave ovens and dishwashers with little metal arms so they could load themselves. Little did those housewives know that by the time we actually got our robot vacuum cleaners, they would be purchased exclusively by bored technophiles whose lease agreements don’t allow pets.

Which is all to say that Good Company has a really marvellous style and setting, its interface and character design evoking a spirit of industry that’s far from the cruelty and heartlessness of the industrial revolution, and much more to do with the feeling of limitless potential and shared economic prosperity brought about by the arrival of the circuit board. Tycoon games so often aren’t grounded in anything other than the cold logistics of simply making things come out of a big pipe at the end of a soulless assembly line, so it’s refreshing to play in an idealised world with such a congruous 70s modernist aesthetic. I mean, just look at this calculator. It’s a thing of beauty. 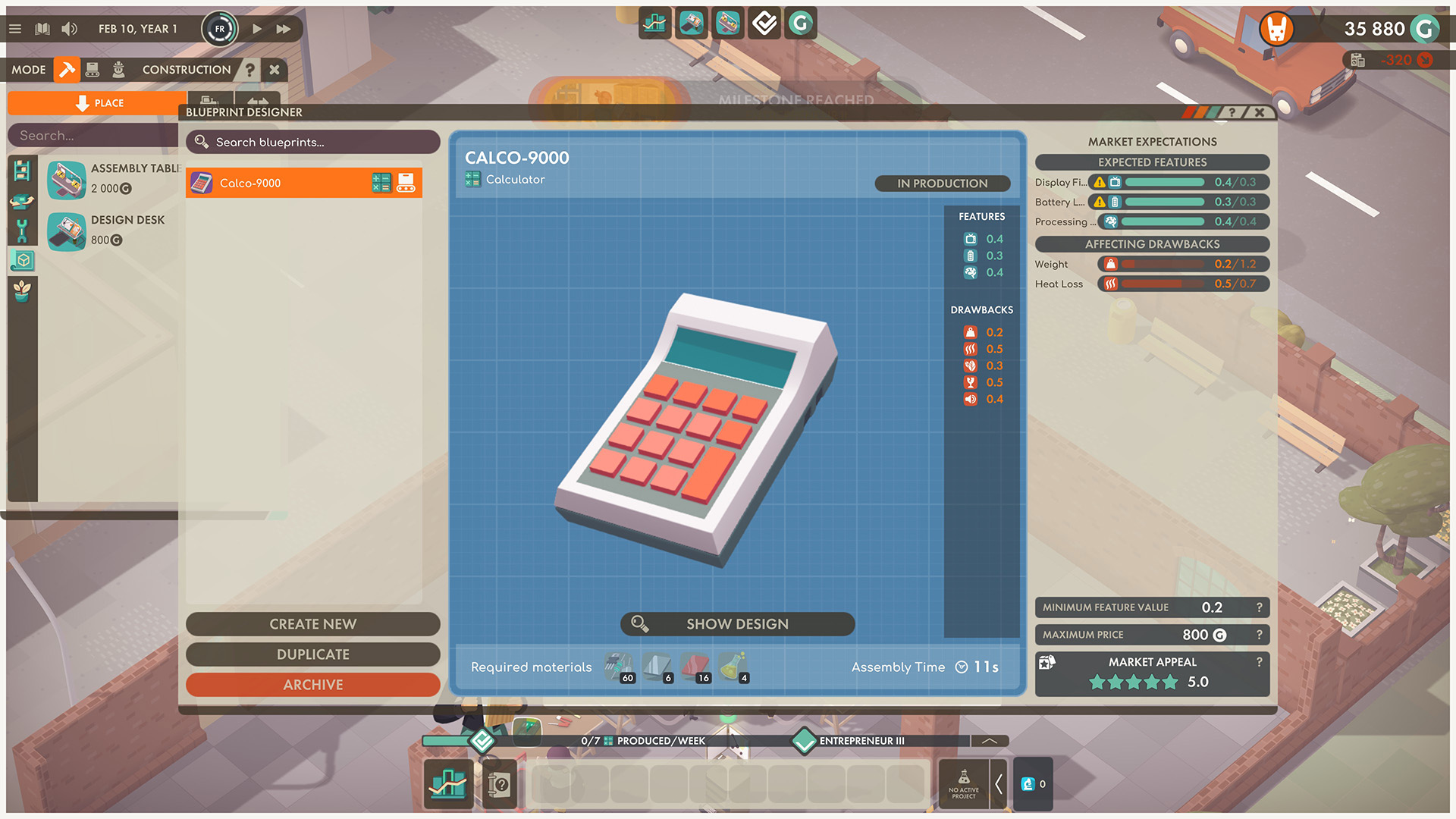 So what do you actually do? Well, your factory – be that a cosy garage or a multi-building complex – has an area where incoming base materials are delivered, your plastics and metals and chemicals. You pick these up with your bare CEO hands, take them to a tinkering desk to turn them into things like LED displays and battery stacks, before taking that module to an assembly table, which can turn those modules into a finished product. Drop the product in the outgoing zone and it will be whisked away to be sold on a dynamic market driven by consumer whim. You repeat this process until you are Steve Jobs.

Of course, nobody becomes a billionaire simply by working hard enough, so like any good industrialist you must suckle greedily from the red-raw teat of a labour force. Employees can be hired to perform any of the operations of the factory so that your little CEO avatar can turn their attention to less vocational matters such as new product design. Stick a worker on a tinkering bench and they’ll automatically turn specified materials into useful modules, which can themselves be forwarded to other desks by couriers to be further refined into higher-tier parts. In this way, raw stuff flows into your factory at one end, and eventually comes out the other as a nice new pocket computer or handheld games console. 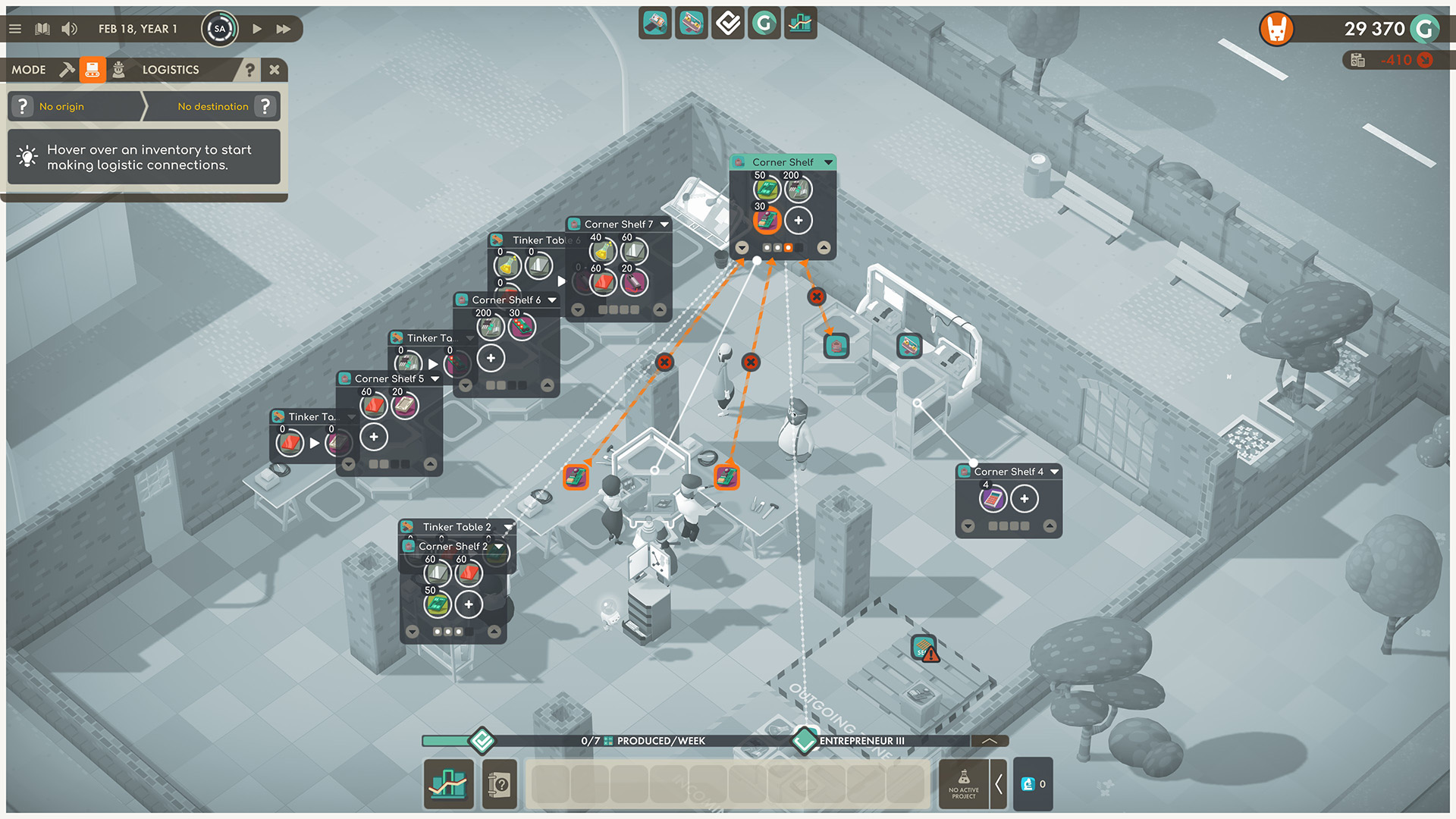 A logistics screen shows you how materials are flowing through your factory, a live graphical overlay making sense of the operations of your meat-powered assembly lines. This is where Good Company could have taken a spill, as again and again in the tycoon genre these vital illustrations of complicated data are obfuscated by some horrendous afterthought of an interface. But here, even in this initial early access release, it works intuitively. Good Company’s neat and easy to navigate visual interface is a small triumph, and without it things would quickly fall to pieces. Shelves and desks appear as nodes with inventories, and by drawing connections between these nodes you designate the direction of travel of materials. If a route seems to arrive at a dead end – say there’s a process that simply piles up batteries on one guy’s bench rather than sending them on to be used elsewhere – you’ll be warned with a helpful exclamation sign.

As far as I can tell there’s no fail state to speak of – or if one exists it’s pretty difficult to reach – and so trial and error can be used to get a sense of how different setups affect your factory’s efficiency. Unpicking any problems with your increasingly spaghetti-like logistics linkages isn’t so much a speed bump to progressing through the game, as it is the entire point of it. You are a Kerplunk player, swapping in desks and modules as you design new and improved versions of existing products with different requirements. Making new gadgets is a game unto itself, as you slot Tetris-shaped modules into a grid to meet the demands of today's discerning consumers, balancing battery life, fidelity, weight and so on. 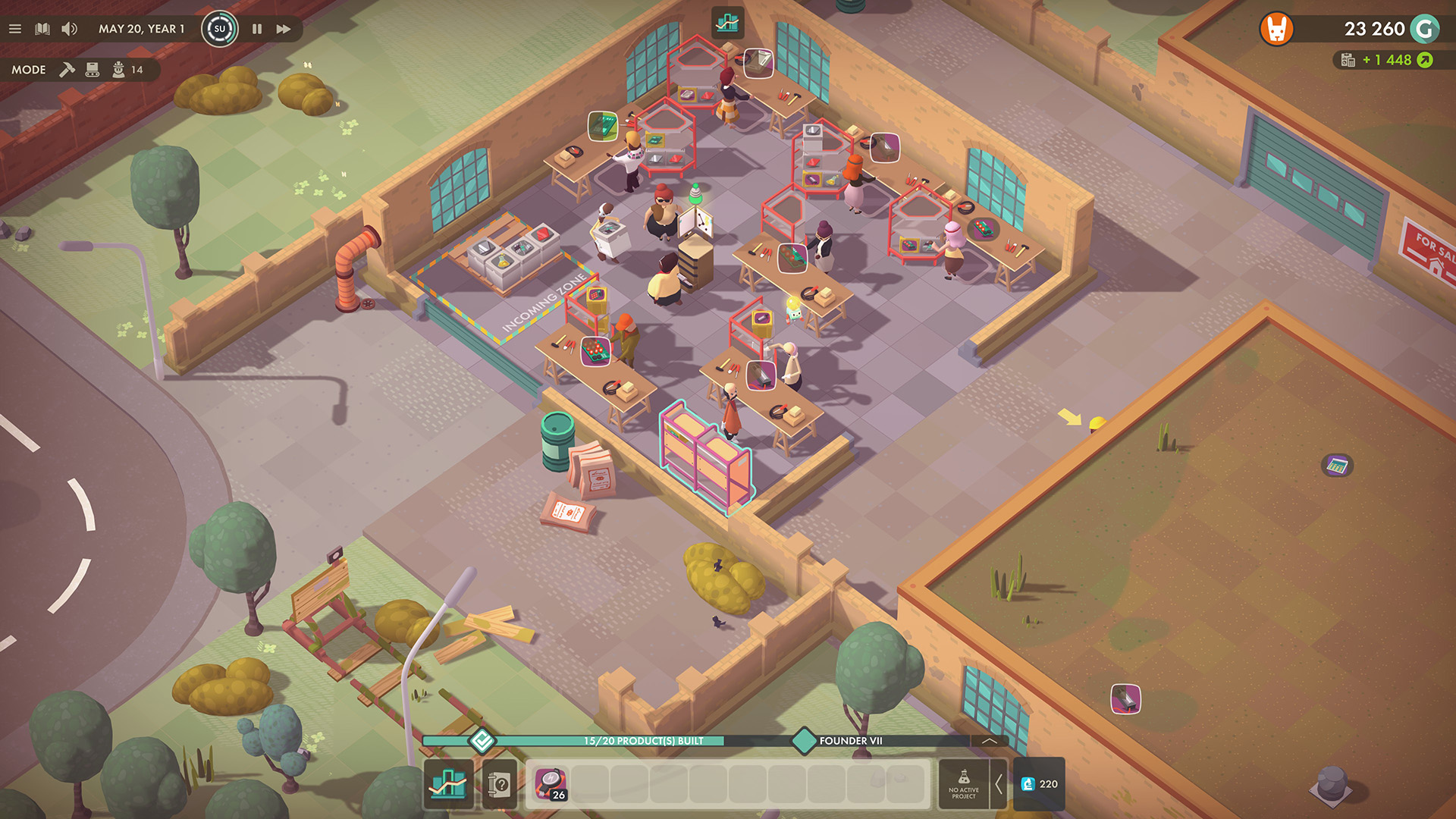 As you play you’ll realise useful side applications of your logistics tree. For example, have a workbench output to two shelves but prioritise only one of them, and the other will naturally begin to act as an overflow for those components that are being produced faster than they’re being consumed. Check the inventory levels on that shelf and you’ll see at a glance where wastage is happening, and then consider where efficiencies could be made.

Which I imagine is how Jeff Bezos does it, whizzing up and down the aisles of an Amazon warehouse on his Segway, gold coins spilling from his pockets as he turns sharply, before pausing at one rack, demanding to know why there are too many copies of Dean Koontz's The Eye Of Darkness, and then firing everybody in his eye line.