It was when I drank baby milk with a bunch of half-naked yakuza in diapers that I really knew I was back in a Yakuza game. I noted an edge of disbelief in my voice as my laughter echoed across the room. But mixed in with my cackle was genuine warmth, too. It was good to be back.

As a long time fan of Sega's action adventure beat ‘em up series, I was lucky enough to give Yakuza: Like A Dragon a whirl for a few hours of preview, and it made me grin like a happy baby throughout - like those diaper-wearing yakuza, I suppose. Even if you’re unfamiliar with the series it’ll likely elicit a similar reaction, because you don’t need to be clued in on any previous happenings to enjoy it. Like A Dragon does retain all the best quirks from its past, and builds on them, too. But make no mistake: it isn’t afraid to tear the foundations down and start anew.

Yakuza: Like A Dragon represents a fresh start for series. So much so, it’s shed the combo heavy brawls and transformed into a fully fledged action RPG with turn-based combat. It tells the story of Ichiban Kasuga, a low-ranking yakuza grunt who is left on the brink of death by a boss he trusted. As Ichiban you recruit a party, venture into the dangerous underworld of Yokohama, and attempt to find out what the heck is going on. 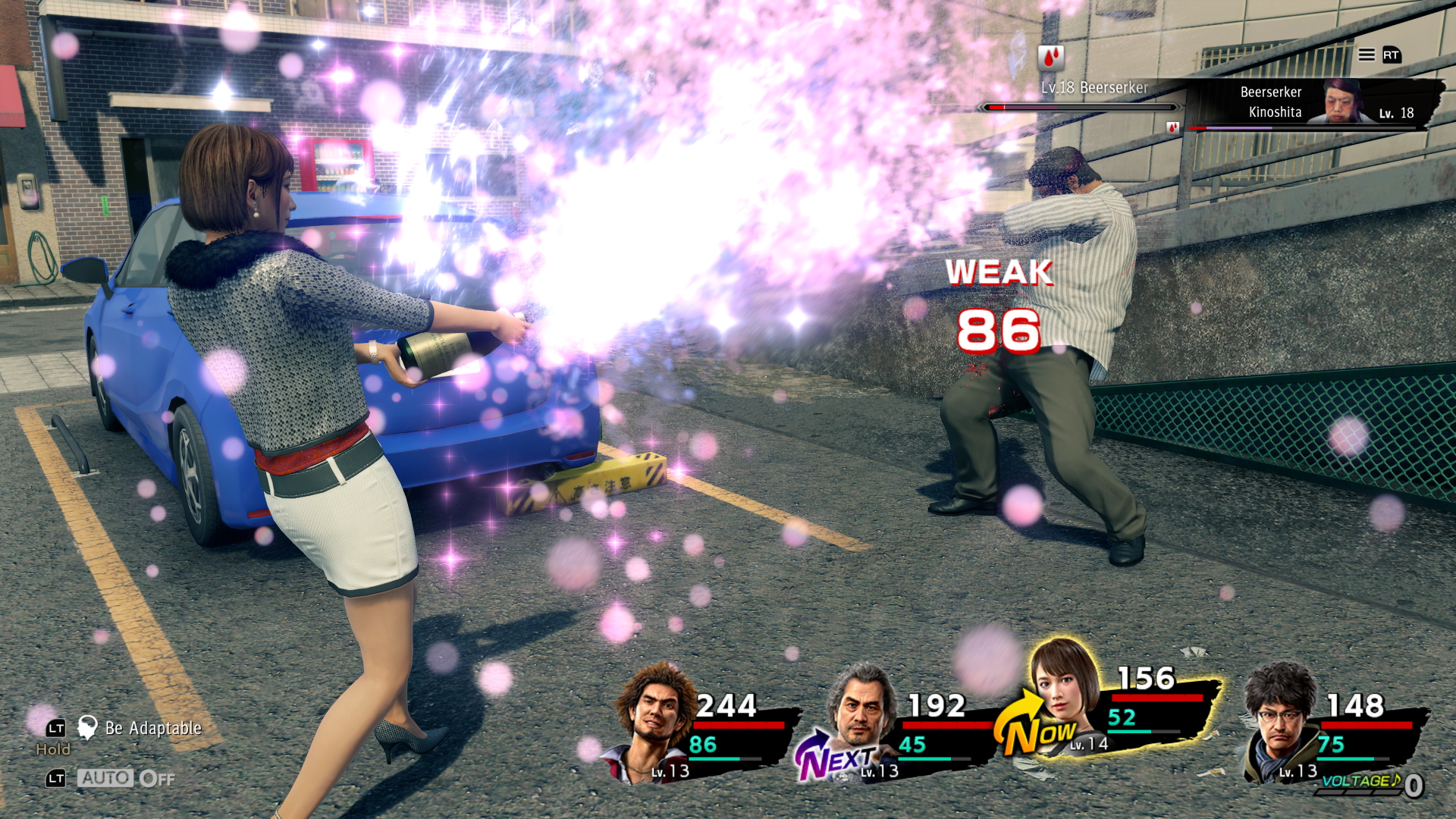 I was dropped into chapter five, roughly six or seven hours into the game. So, in many ways, I had no idea what was going on. What I did know was that I had a party of four. Which is new! Usually you’re controlling the stoic sweetheart Kazuma Kiryu, beating up thugs and running hostess clubs on your lonesome. In Like A Dragon, Kasuga’s in charge of a fully customisable team with stats and gear and plenty of personality.

I was accompanied by Koichi, a former cop who was game for a laugh, Nanba, a homeless ex-nurse who smacked enemies with his umbrella and dished out sage advice, and nightlife mogul Saoko who gave it to me straight and batted thugs with her handbag. They wander alongside you as you explore, share meals with you, and take up arms with you. Having company added a new, welcome dynamic to everything I did, and it was real nice having them tag along with me.

I particularly liked the moments when I was soaking in the sights of Yokohama and someone piped up with a story. Like, “Hey guys, want to hear a funny story?”, and we all dipped into a conversation and bounced off one another. Not only does it give the group some flavour, it deepens your bond with them. It's classic RPG party banter, and I can see myself getting very attached to these characters come the full release.

When my time with the demo was up, I’d become pretty fond of Kasuga. While I'll always adore Kiryu and his serious yet naïve nature, simply put: Kasuga is more fun to play. He’s colourful in his interactions and a little clumsy in the way he presents himself, which is, more often than not, to nasty thugs who stand in his way. This gives him an irresistible unpredictability. In every interaction you’re itching to know how he’s going to react and what he’s going to do next. I’m very glad he’s the new flag bearer for the series.

Yokohama’s a grand departure from Kamurocho - Yakuza’s depiction of Tokyo - which the series hasn’t really strayed from until now. I was immediately struck by Like A Dragon's scale. Yokohama is vast in comparison to the tightknit streets of Kamurocho. But it's not so vast large portions of it become forgettable. It hits that sweet spot of near constant discovery every time you take to its streets, but, much like Kamurocho, you’ll still be able develop a feel for the city, a sixth sense which’ll guide you to objective markers without the need for a map. 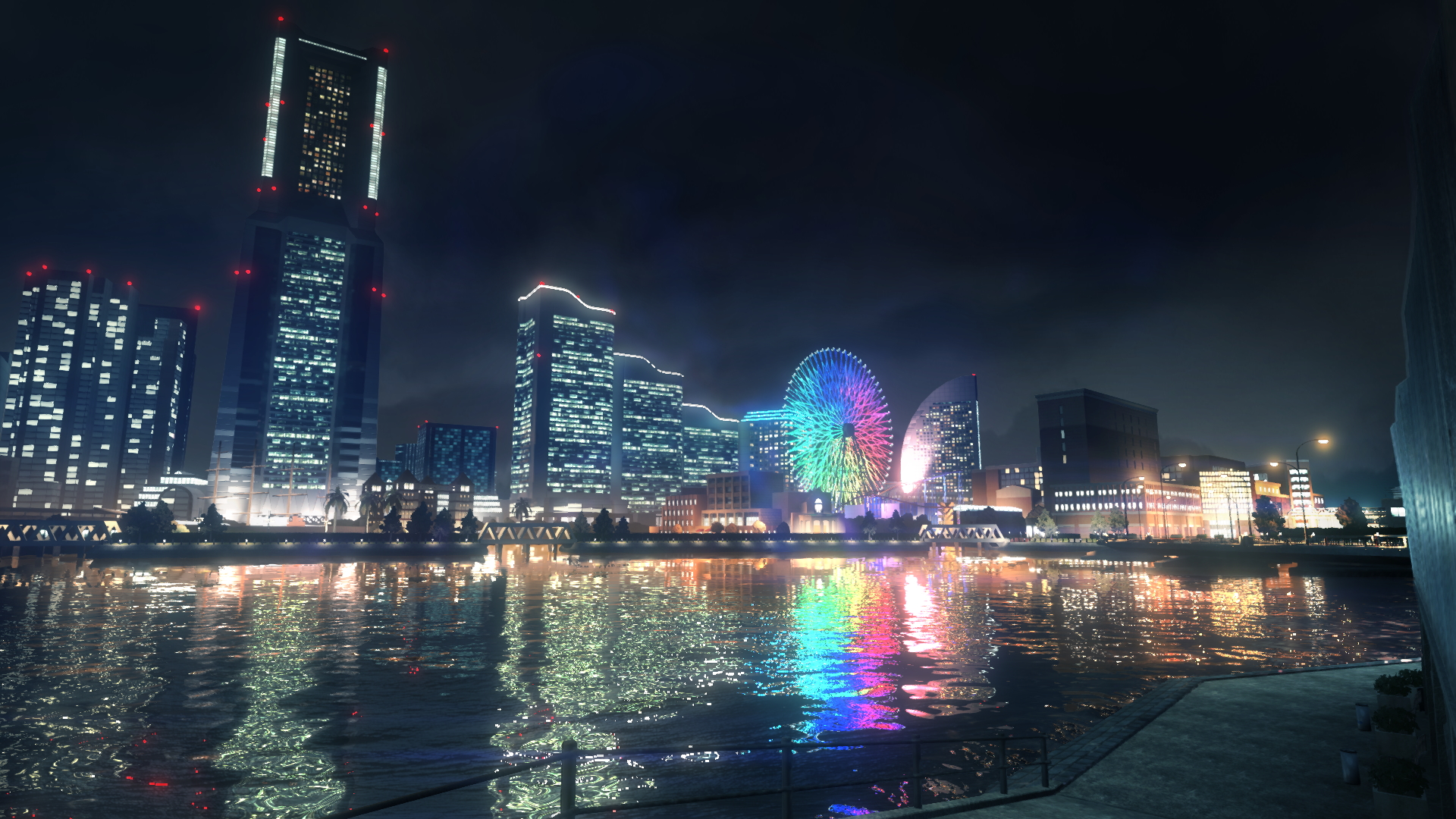 Boy, does Yokohama look good, too. Wide open streets teem with life, skyscrapers loom overhead, stalls sizzle with street food and neon signs blink at night. Of course you’ll find the usual array of restaurants and their wonderfully rendered food to chow down on, as well as tonnes of mini-games to get stuck into. Not to mention the plethora of hilarious side stories, one of which saw me hurriedly escorting a naked man covered in soap bubbles to a clothes shop so that he could cover up and visit his passed out nan. In stark contrast to the seriousness of the plot, these side quests have often been the source of many a belly laugh and a few quiet tears in games past. The best are devious in their approach, starting off serious then turning whacky or frightening or touching. Like A Dragon has this dialled up and nailed down.

Plus, these side quests are far more literally rewarding in Like A Dragon. Or perhaps it's more accurate to say that everything you do is more rewarding. Eating out, choosing different dialogue options, defeating enemies. All of this counts towards some form of EXP, some bonus to go towards shaping your party into a well-oiled team of misfits. Your band of misfits. And this is necessary, what with the new turn-based party combat.

One thing I was particularly nervous about before heading into the demo was the combat. Would turn-based feel better than Yakuza’s classic beat ‘em up style? Yes, I think. I can’t be absolutely certain, as being dropped into chapter 5 with a party and gear I had zero context for didn’t do me any favours. What I can say is, on a basic level, combat felt just as punchy, if not more impactful than before.

There’s a new layer of depth to fights. Whereas before you could mash the same combo repeatedly to basically beat every single boss, now you have to consider how they’re positioned, whether to lower their defense first, or whether to guard to reduce incoming damage. For the first time ever, you have to plan ahead and not just be reactionary. Each of your party members’ skills are suitably hilarious, too. Being able to call in a murder of noxious crows to debuff a group of baddies is glorious.

You can also take up Jobs, classes which govern the move sets and skills you can use in combat. I tried out the ‘Chef’ and fought with two ladles in my hands, chucked plates, and whipped up some quick buffs for my allies. There’s a musician, a J-Pop idol - so many! It’s brilliant fun to have this level of customisation, this new layer of choice.

Perhaps what says the most about Yakuza: Like A Dragon is that I've only just left, but I already want to go back to Yokohama. It gave me that fuzzy, familiar Yakuza feeling, but with a new jolt of excitement in my stomach. For newcomers I reckon this is shaping up to be an excellent starting point. And for veterans, I think this is more than a promising refresh. I think we could be in for the best entry yet.