If Disney Pixar did a remake of Inception, it would probably look like Psychonauts 2. At least, that’s how I’m going to explain it to those who have not played the original. Yes, I know Psychonauts explored the mind invasion angle years before Leonardo and the girl from The Last Of Us got lost in the brain of a trust fund baby. But that's still the predominant feeling I got from my short demo at E3. In this section of the game the aforementioned ‘nauts scramble around inside the emotional turmoil of long-time enemy and respected dentist, Doctor Loboto. It’s a bizarre and colourful world, and it’s run-o-jumping looks to be fine and dandy, even if it also seems at times a little unambitious.

The game starts with a bait and switch, with hero Razputin and the rest of the gang from the previous game seemingly working in a massive office. It turns out life in the elite governmental spy organisation is quite dull day-to-day. Chief Oleander (the shouty military man with a head like an upturned ice cream cone) has gone from army man to CEO, and is getting everyone together for the company’s regular “morale corral”.

“And that’s how profits have risen 900 percent,” he says, as our heroes enter the room. 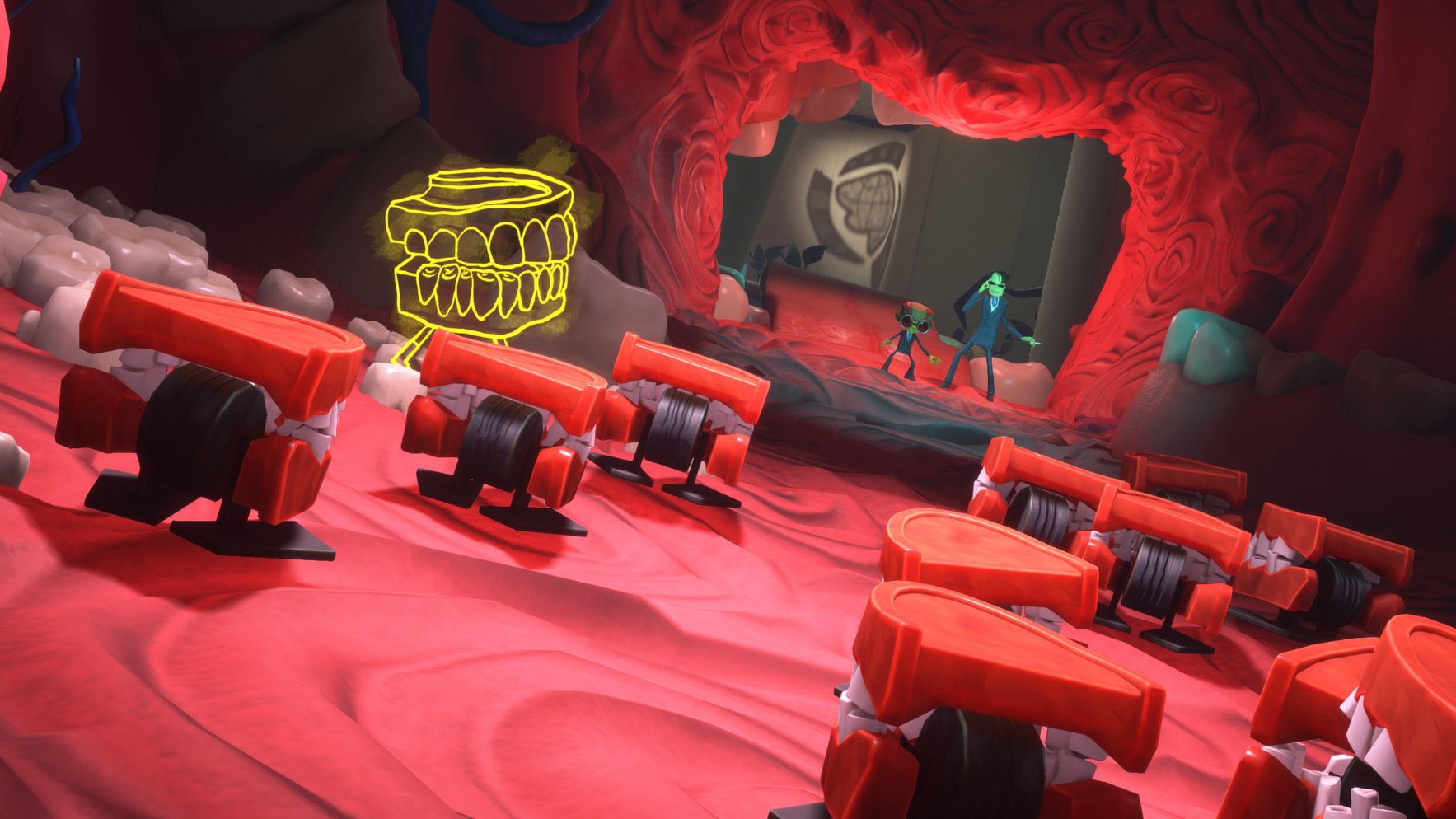 Then he announces the employee of the month winner – it’s Doc Loboto! He has won a tropical beach holiday, and comes to the stage to collect his prize. But it’s all a ruse. The gang is inside Loboto’s head, and trying to lull the bad doctor into bringing a consent form to his shadowy boss (or at least the psychological manifestation of his boss). This is a bigger, badder psychic evil we don’t yet understand as the player, and it's the person the ‘nauts are really after.

Unfortunately, the doctor figures it out, and goes legging it through the recesses of his own sordid consciousness. As Raz, the player has to chase the psychoperp as the office décor of the gang’s “construct” starts to crumble away, replaced by protruding gums and teeth of the doc’s true mindscape.

This is all probably a bit weird to strangers of the series. It was to me, having only played a few hours of the first game in preparation for this brief showing. From that taste of the old stuff, though, all I would demand of Sequelnauts is enough modern platforming sensibilities to keep me docile while the jokes fly out and the story unfolds in its own goofy way. It looks like this might be the case, but sadly I didn’t get to lay my mitts on the controls. I could only peer from afar as a dude at the top of the room double-jumped over toothy gaps and slid down collapsing office hallways.

Platformer-wise, it seems more vanilla than I expected. There are health bars in the corner. You can smash through boxes. There is wall-jumping, dodge-rolling, trinket collecting. There was floating levitation, and a sequence in which Raz rolled around on top of a ball of energy. I have a vague feeling if you took out all the weird corridors made of teeth, and the periodic jokey chats between characters, there’d be nothing here that wasn’t already in any Ratchet and Clank game. Again, this is only a demo, so it is possible we’re only seeing the most obvious stuff, but still – I thirst for more.

Obviously, there are baddies to fight too, defeated using Raz’s melee smashes and telekinetic box-flinging. The beasties take a few different forms. "Doubts" are flying creatures laden with heavy iron burdens. "Regrets" are slimy gits who slurp out of the floor and gloop towards you. And then there are "Censors" (recognisable to players of the first game), who are stuffy bureaucretins in suits who fire stamps of the “no” symbol at you. You can kill all these nasties with the usual smashing, but we also saw a “pyrokinesis” area attack that set all of these problems ablaze.

But much of this gamey stuff will be of tangential importance to Razlovers. Double Fine often simply chase a funny and childish dream with their games. Doubly childish considering so many of their games are about kids just trying to get through some strange event (Costume Quest’s trick or treaters, Stacking’s cheeky Matryska doll). Psychonauts felt like a “jokes first, game later” type deal. And there is some of that attitude present here. 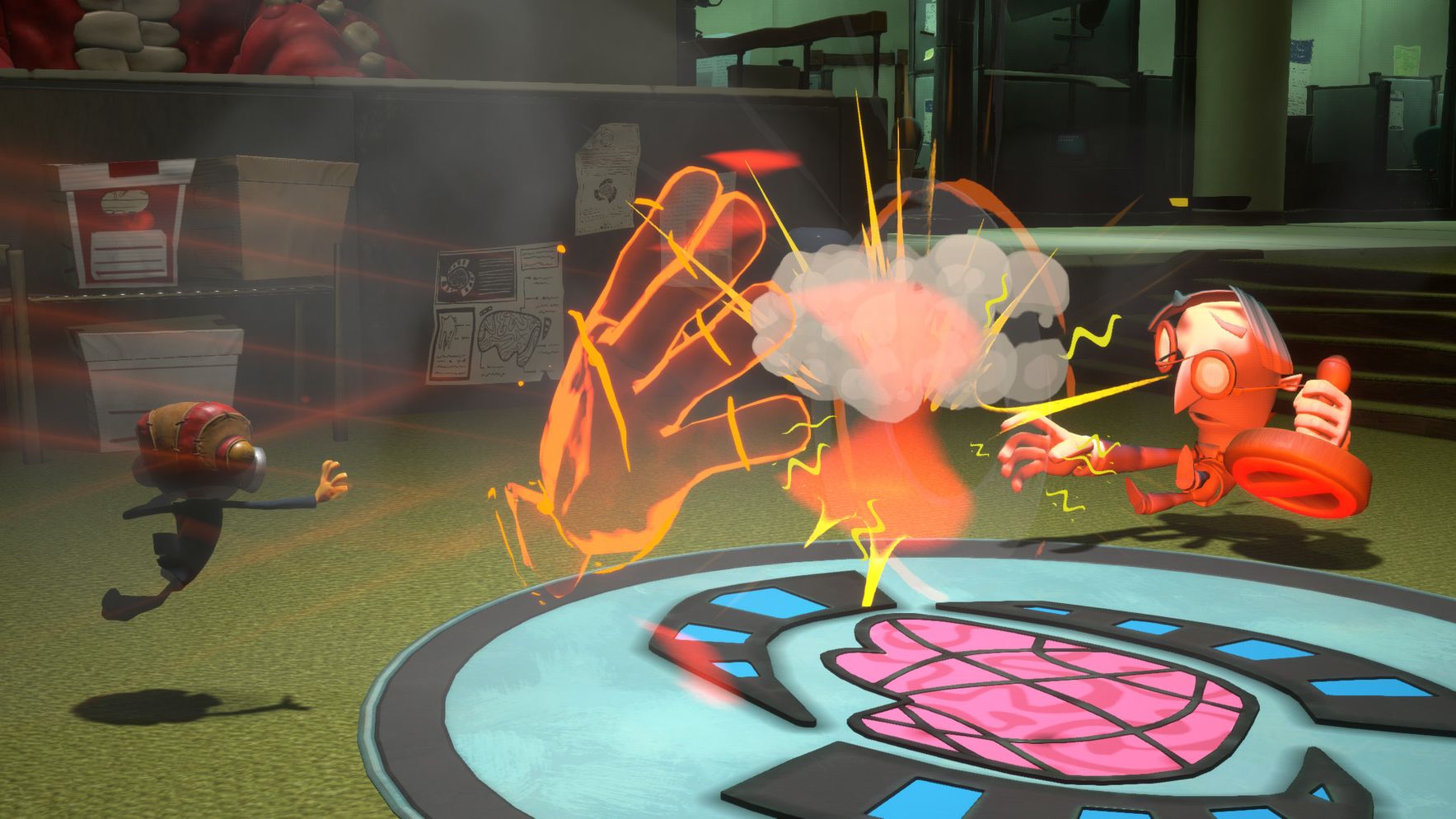 I smirked at the cowardly Oleander when he knocked over a chair as he ran through the background of a shot. One early visual jape sees Raz trying to squeeze through the crowd, and his comically large head makes it difficult to do that, even though his slim body can get through the gaps between people just fine. I didn’t hear any jokes I liked as much as the quiet crosstalk gag at the start of the first Psychonauts, where Oleander guesses the starting letter of Razputin's name incorrectly in the middle of our hero introducing himself. But I still smiled a lot throughout the demo. I exhaled a lot of happy air out of my nose, you know?

More impressive still were the surreal corridors and warping level design, which seems to work much better with today’s animation and effects than those of yesteryear. There are doors made of two clenched jaws, which open open as if pulled apart by a zipper, there are sagging uvulas hanging down like punchbags, hallways that stretch suddenly into infinity, chattering teeth toys, blue nerve endings poking out from a fleshy gum floor, flying personified teeth who speak like gangsters.

It is the bendy world of Christopher Nolan but with jokes and more than two colours. Part of me wishes I had something more incisive to report than “game X is thing Y meets thing Z” because that is so often a simplfication, especially when game X was doing both Y and Z before Y and Z were cool and famous. But sometimes we stoop to the mash-up, because that’s just where our brains go. It’s Pixar and Inception and Ratchet and Clank.