Sega may have their roots in console manufacture, but they've come a long way as a PC games publisher, with fewer and fewer titles being left console-exclusive. The latest to make the hop over is Puyo Puyo Tetris, Sega's well-regarded fusion puzzle game. The PC release, available now on Steam and Humble, is budget-priced compared to its retail console debut last year.

Sega sent us a pre-release copy, so I've been putting it through its paces, and am happy to say that outside of a couple of technical wrinkles, this is a great port of a very generous package of block-puzzling variants.

For playing solo, the main attraction is Adventure mode, a surprisingly lengthy story campaign featuring a chatty cast of block-battling characters that would ordinarily chafe at my resolve, but are redeemed through some genuinely funny writing (in a self-aware, Saturday morning cartoon kinda way) and a decent dub. The soundtrack is also catchy enough that I've found myself humming the main theme a few times already.

If you'd rather mute the voices or skip dialogue altogether, you can. Aside from Adventure progression, a few alternate characters (which are just cosmetic) and some variant block sprites, everything in the game is unlocked from the start. The PC version even lets you use the original Japanese voice track. All in all, the sheer variety of options is almost intimidating, so it's nice that Adventure mode starts with the basics.

Wisely opening with low-level Tetris play, Adventure gradually ramps up to introduce Puyo Puyo's more complex and planning-oriented gameplay. After that, you'll learn a mode where you alternate between the two on separate boards, requiring new levels of mental agility. Then you'll learn a mode featuring game-altering powerups and later still you're introduced to the ferociously complex Fusion mode, where you play both styles simultaneously in a single playfield.

In addition to Adventure's many battles there are puzzle trials where you try to clear patterns of blocks using a limited collection of pieces, timed challenges and more. All of these modes are available to be played separately either solo or with friends. Puyo Puyo Tetris ends up so packed with modes and variants that I thought vanilla Tetris was somehow absent. It turns it's just tucked away under Solo\Challenge\Marathon. By default it's limited to ending after 150 lines, but you can set it to endless, too. 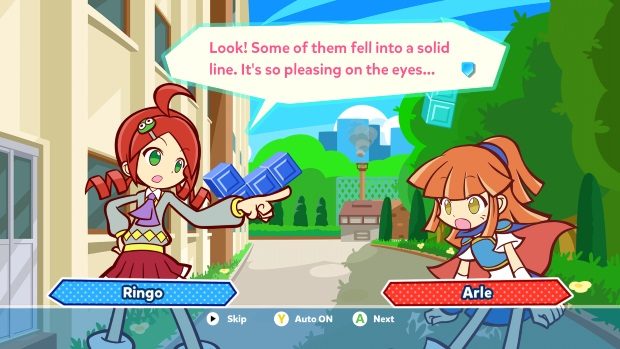 I only have two technical complaints with the PC port. One minor, one potentially more serious. The lesser issue is that there's no manual control rebinding, although this is less of a hassle than I was expecting. There are a good range of pre-set control layouts for both mouse/keyboard and gamepad, and for accessibility's sake, both controllers offer a one-handed mode.

More concerning is an issue I noticed when running the game off my (fast and new) hard drive. The game would occasionally skip or stutter and the music would loop incorrectly. While not a major issue, it did feel irritating. The stutters vanished once I moved the game to my SSD, so it's likely a streaming issue of some kind, and hopefully something that will be patched.

With the PC version not being launched yet, and few press people playing before release, I've not had a chance to play any matches online yet, although local play does support up to four players. You'll need extra gamepads, of course, but that's less of a problem than it used to be.