With no sign of AMD's next generation of Navi GPUs in sight, their newly-released Radeon 7 is currently their toppest of top-end graphics cards available today. But how does it stack up against Nvidia's toppest of top-end graphics cards, the RTX 2080 Ti? That's what we're here to find out - and I've even done my graph colours the right way round this time, which is more than can be said of my Radeon VII vs RTX 2080 comparison piece. To the bar charts!

Now I know the Radeon 7 and RTX 2080 Ti aren't really in the same league when it comes to overall power. After all, the Radeon 7 has a tough time beating its non-Ti sibling, the RTX 2080, most of the time, so you might say it's unfair to put these two cards together like this, especially when the RTX 2080 Ti is by far and away the best graphics card you can buy today.

But this isn't really about saying which card you should buy over the other. For starters, the RTX 2080 Ti costs over £400 / $400 more than the Radeon 7, so it's not like they're even in the same potential price bracket. Instead, I'm more interested in seeing what today's top-end AMD card looks like against today's top-end Nvidia card, because everyone likes comparing the best of one thing with the best of another thing, regardless of how much they cost. So no tantrums in the comments, you hear? Good.

In much the same way as I conducted my RTX 2060 vs GTX 1060 and RTX 2080 vs GTX 1080 articles, this comparison test involves putting each card through almost every game in my general graphics benchmarking suite to see what their average frame rate is across different resolutions and graphics settings. I've used built-in benchmarks where I can, but for games that don't have benchmarks of their own, I've played the same chunk of level for each card, noting down minimum and maximum frame rates for those particular sections and taking an average frame rate from there.

Each card has also been tested in the same PC - the Intel Core i5-8600K CPU and 16GB of RAM system I used to review them in the first place - although hopefully I'll be adding in more results with either a Core i7 or Ryzen 7 CPU very soon to see what each card is really made of with components more befitting of a high-end build. I've also only focused on how they both perform at 4K and 2560x1440 for now, as both of them are more than capable of delivering well over 60fps at 1920x1080 on max settings - plus, you really don't need to spend upwards of £650 / $700 on a graphics card if you're only going to play games at 1080p. 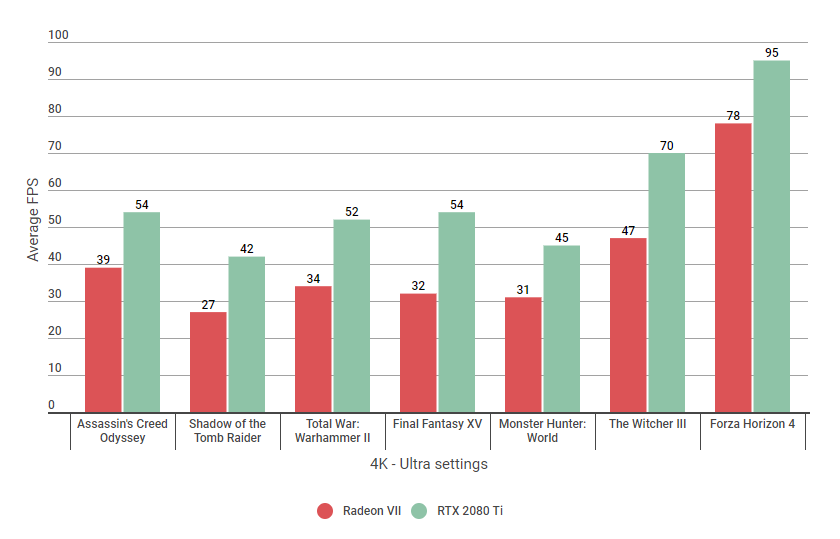 The Radeon 7 is by no means a terrible 4K graphics card. In fact, it can play a lot of games quite comfortably at either High or Medium quality settings most of the time, but a 4K Ultra card it is not, at least not in the face of Nvidia's RTX 2080 Ti. Whereas the Radeon 7 often can't muster much more than 40fps at this graphics setting (unless you're the very easy-going Forza Horizon 4 or several years old like The Witcher III), the RTX 2080 Ti is pushing at least that number of frames, if not closer to an average of 55fps, making it much better suited to running the latest games on the very best graphics settings than its AMD rival.

That's sort of to be expected from a £1000 / $1000+ graphics card, but it just goes to show that there's still quite a big speed gap that AMD isn't able to cater to yet. That may well change with the introduction of the company's next-gen Navi cards, of course, but right now, there's a very large AMD-sized hole at this end of the performance scale.

As a side note, if Shadow of the Tomb Raider's results look a little low, that's because I've got the game's tough SMAA x4 anti-aliasing enabled. That may be unnecessary at 4K given how sharp it looks already, but hey, I wanted to highlight that 15fps-odd jump between the two cards that turns something barely playable into a comfortably smooth gameplay experience. On the next AA setting down (SMAAT x2), you're looking at an average of 62fps for the RTX 2080 Ti and 48fps for the Radeon 7.

Final Fantasy XV, meanwhile, doesn't have any of the extra Nvidia effects turned on for this test, because otherwise the Radeon 7's average frame rate would be somewhere down in the mid-teens because it really, really doesn't like being forced into doing Nvidia's HairWorks or TurfEffects tech when it's not really made for it. As a result, this is the average frame rate you can expect with all the Nvidia effects switched off. 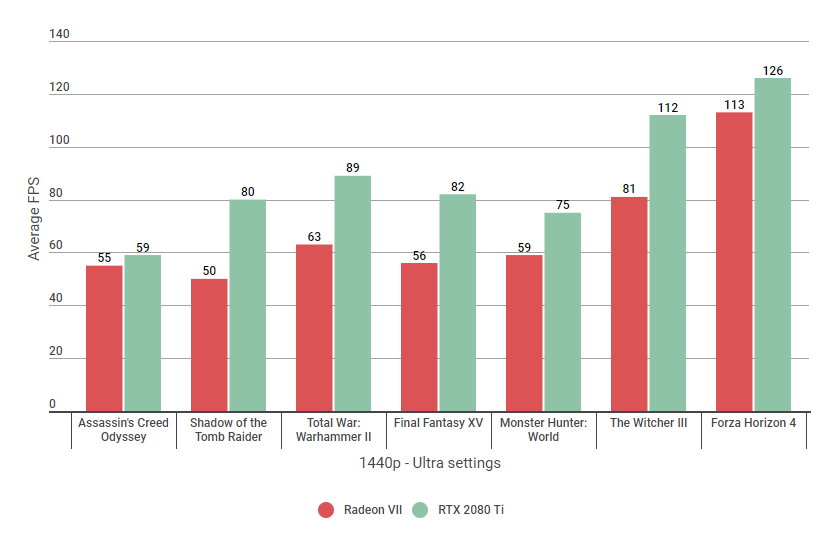 Let's face it, you're probably not buying either the Radeon 7 or the RTX 2080 Ti for playing games at 2560x1440, as there are plenty of other graphics cards that can do that for a heck of a lot less. But I thought I'd include this graph anyway, because if you happen to own a 1440p monitor with a refresh rate higher than 60Hz, such as 120Hz or even 144Hz, then you're probably going to need a more powerful graphics card like one of these to help make use of all those extra frames - especially if you want to do it on the best graphics settings.

And once again, it's Nvidia's RTX 2080 Ti that can best fulfil this goal, as every game but one in my benchmarking suite has an average frame rate of at least 75fps on Ultra settings, if not substantially higher. The Radeon 7, meanwhile, settled much closer to 60fps in recent games, although you'll still be able to get higher frame rates on older games such as The Witcher III, or highly optimised games like Forza Horizon 4.

I should note, of course, that cheaper graphics cards such as my current 1440p graphics card champ, the RTX 2060, are also capable of hitting frame rates or 70fps+ at 2560x1440, so it's definitely not necessary to spend who knows how much on either the Radeon 7 or RTX 2080 Ti to make use of all those extra Hz. However, you will have to settle for Medium graphics settings to hit these kinds of speeds, which may be a compromise too far for those who value graphical fidelity above all else (although between you and me, I'd much rather have a higher frame rate than super duper, extra shiny polygons).

Still, even at this resolution it's clear AMD have got a lot more work to do if they're going to catch up with Nvidia's RTX 2080 Ti, as the 20fps-odd gap between the two cards at 4K balloons even further here to around 30fps. That's quite the jump, all things considered, and for some it may be worth that extra £400 / $400 separating the cost of the two cards. What's more, even if there is some bottle-necking going on here due to only having a Core i5 CPU at their disposal, it's happening to both of them, so I'd still expect to see a similar-ish gap between them even if I retested them with a Core i7 or Ryzen 7 CPU.

Ultimately, though, AMD's top-end graphics card just isn't as top as what's on offer over at Nvidia, with the RTX 2080 Ti comfortably maintaining its lead as the toppest of all top graphics cards. For now, anyway.

As I mentioned earlier, it's possible AMD's upcoming Navi cards might help redress the balance somewhat, as goodness knows we could all do with a bit more competition at this end of the performance spectrum to help drive down those horrendous prices a bit. Until then, however, Nvidia's RTX 2080 Ti holds onto its crown as the toppest of top-end graphics cards.