AMD's Radeon 7 (or Radeon VII to give it its proper, official styling) is finally here. Not only is it the world's first 7nm gaming card, but it's also the first consumer GPU to come stacked with a whopping 16GB of memory - that's double what AMD stuck on their previous top-end card, the Radeon RX Vega 64, and 5GB more than what you'll find on Nvidia's GeForce RTX 2080 Ti (which is currently the best graphics card around if you happen to have a spare thousand smackers stashed away under a mattress somewhere).

In truth, most games don't need anywhere near that amount of memory just yet, and as you may have seen from my AMD Radeon 7 review, it doesn't really end up being much help when it comes to competing against its main Nvidia competitor, the RTX 2080. So I thought I'd take a closer look at how they both stack up again, this time via the medium of some lovely graphs, both at 4K across a variety of different graphics settings as well as what's possible on max settings at 2560x1440. To the bar charts!

You know the drill by now. Just like my RTX 2060 vs GTX 1060 and RTX 2080 vs GTX 1080 articles, I've tested both AMD's Radeon 7 and Nvidia's RTX 2080 Founders Edition with pretty much every game I currently use as part of my general benchmarking suite. This includes Shadow of the Tomb Raider, Final Fantasy XV, Assassin's Creed Odyssey, Forza Horizon 4, The Witcher III, Total War: Warhammer II and Monster Hunter: World. The only one I've left off is Doom, because everything can run Doom at ludicrous frame rates and I don't think it really adds much to the overall conversation.

I've also tested each card with my Intel Core i5-8600K CPU and 16GB of RAM, and jotted down the average frame rate across a variety of resolutions and graphics settings. I'll start with how it does at 4K, as that's the main reason why you'd be buying one of these cards in the first place, but you'll also find how they fare on max settings at 2560x1440 as well, because why not?

Starting with what the Radeon 7 and RTX 2080 can do on 4K Ultra settings, the RTX 2080 has a clear advantage here almost across the board. The only game where the Radeon 7 actually comes out on top is Assassin's Creed Odyssey, where its average benchmark score was just a single frame in front of its Nvidia rival. 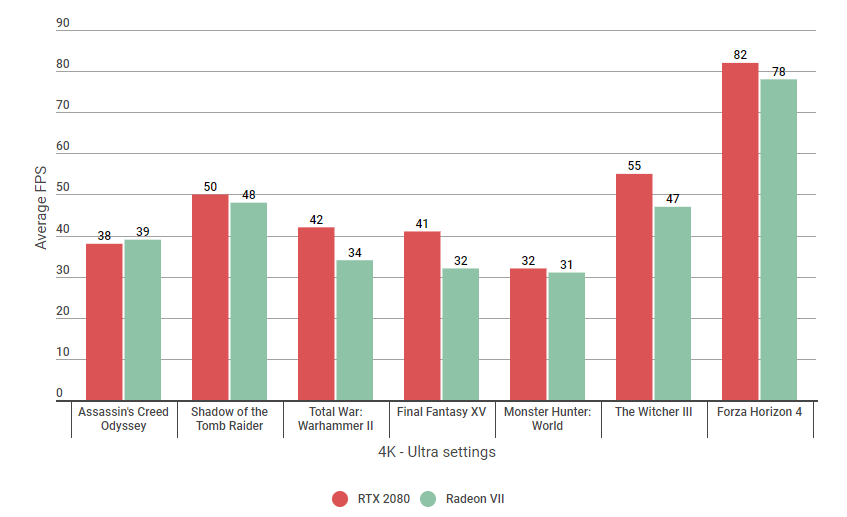 That's not the only game where they come within a hair's breadth of each other, either. As I mentioned in my Radeon 7 review, the two cards are pretty much neck and neck in both Monster Hunter: World and Shadow of the Tomb Raider (with its SMAATx2 anti-aliasing enabled), and even the gap in Forza Horizon 4 isn't really that large overall.

That said, there are still other cases where the RTX 2080 has the clear advantage, such as in Total War: Warhammer II, Final Fantasy XV (with all of the Nvidia effects turned off, I might add) and The Witcher III, where the RTX 2080 offers significantly smoother frame rates than the Radeon 7.

Really, though, Ultra is a bit beyond what either graphics card is really capable of at the moment (at least for big new blockbusters), so you'll probably want to be sticking with either High or Medium settings if you're after that silky smooth 60fps. Below, you'll see how they fare on 4K High settings, with the exception of Forza Horizon 4 as it was already well above the 60fps mark on Ultra. 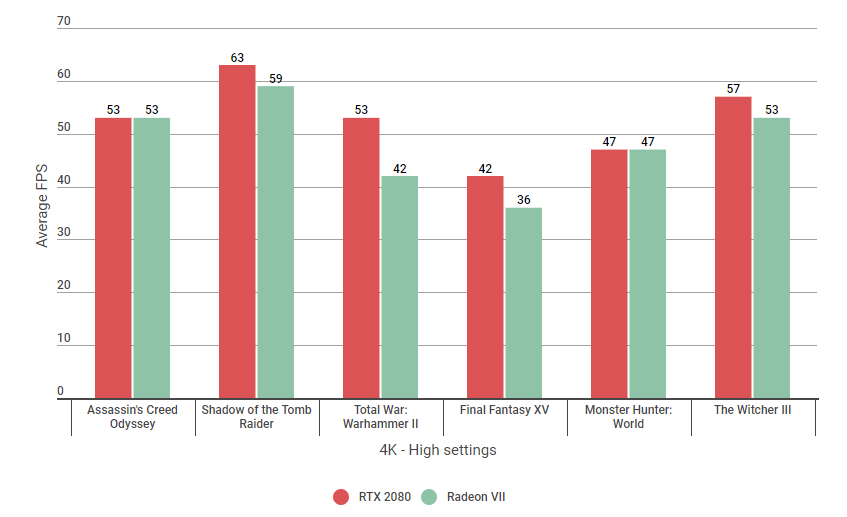 Here, it's a much tighter race between the two cards, and on the whole both of them cope pretty well on High, so much so that you could probably get away with using this setting quite comfortably in a number of today's big games. Final Fantasy XV is still a bit of a tough nut on this setting, but if graphical fidelity matters more to you than the kind of frame rate you're getting, then High is certainly doable on both the Radeon 7 and RTX 2080.

Overall, however, the RTX 2080 still has the upper hand, particularly when it comes to those more borderline cases such as FFXV and Total War: Warhammer II. The latter demonstrates this quite well, as you'll notice the Radeon 7's average frame rate of 42fps on High is actually the same as what the RTX 2080 managed over on Ultra.

What's more, if you look at the graph for Medium 4K settings below (again omitting the games that were already pretty much at 60fps on High), you'll find a similar story for Final Fantasy XV, too, with the Radeon 7 managing roughly the same speed on the game's Average setting as the RTX 2080 did on High (and ditto again for Total War). 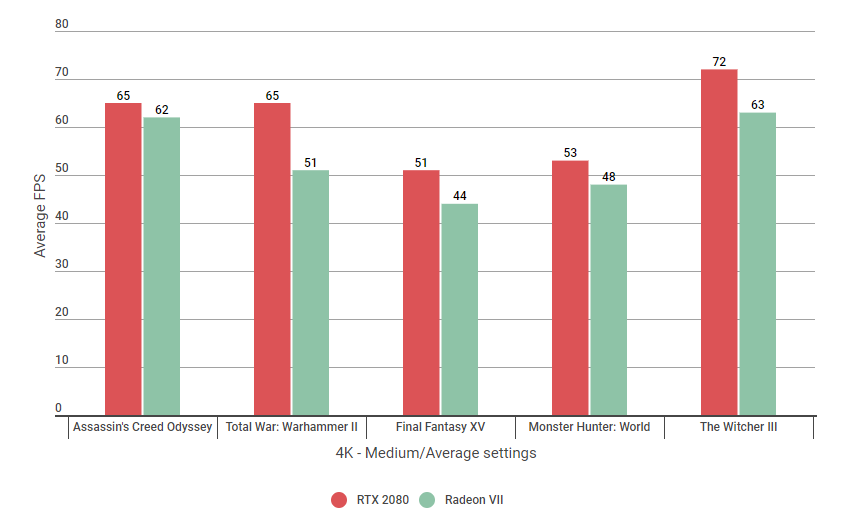 That might not bother some people, of course, but when the RTX 2080 can currently be had for roughly the same price as the Radeon 7 (or even a tenner or so less in the UK), I just can't see any conceivable reason why you wouldn't want to go with the RTX 2080 if you're thinking about buying a 4K graphics card. There's an argument to be made that the Radeon 7's larger memory banks are much better suited to more general content creation tasks such as professional 4K / 8K video editing tools and the like, but if you only ever use your PC for gaming then the RTX 2080 is hands down the superior 4K graphics card right now.

The same can be said of the RTX 2080 when it comes to its performance at 2560x1440 on Ultra settings, too. While the Radeon 7 is perfectly capable of hitting 60fps in most games here, which is all you really need if you only have a 60Hz monitor at your disposal, the RTX 2080 can often do so much more, making it a better fit for screens with higher refresh rates. 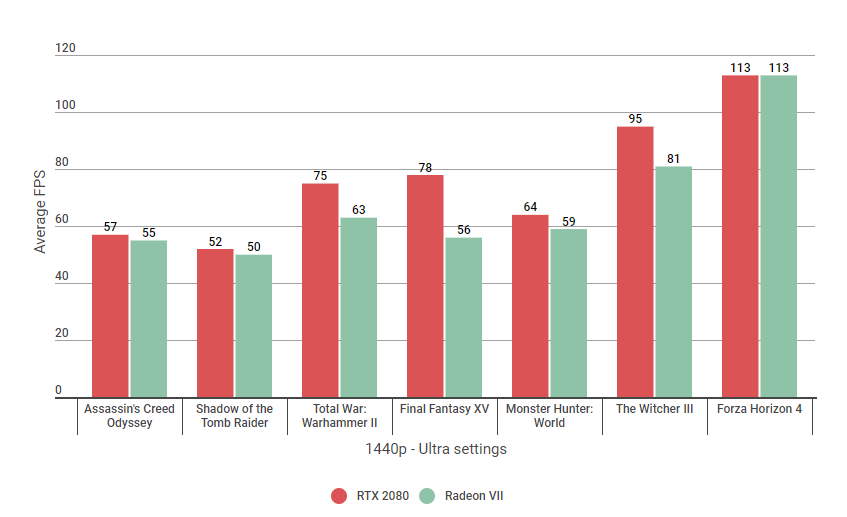 Sure, there are some cases once again where each card is pretty much identical in speed, but it's still the RTX 2080 that comes out on top overall, even if sometimes it's only by a couple of frames. Again, this wouldn't be so bad if the Radeon 7 was significantly cheaper than the RTX 2080, but when you're spending upwards of £650 / $699 on each graphics card at time of writing, you really want to be getting the absolute bestest best for your money - and based off these average frame rates, I have to side with the RTX 2080 in this case over the Radeon 7.

(And really, if you're after a graphics card that can do 60fps at 1440p on max-ish settings, do yourself a favour and buy the infinitely cheaper RTX 2060, because that will be a far better use of your money than either of these 4K pixel-pushers.)

Aside: and yes, I've only just realised I should have used the *other* colour for each card in all of the graphs I've created above, for which I am deeply sorry and apologise for messing with the AMD red and Nvidia green dynamic that's been so firmly rooted in everyone's brains. Next time I'll do better.