AMD has just announced the Radeon VII, the world's first 7nm gaming GPU and their 2nd generation Vega graphics card. With a massive 16GB of 2nd gen high bandwidth memory under the hood, plus a whopping memory bandwidth of 1TB/s, this graphics card is geared up for 4K gaming at maximum settings. Here's everything we know so far.

Now I know what you're thinking. Why isn't this an Big Navi GPU? Weren't they meant to be AMD's next gen bestest best graphics cards? Alas, the Radeon VII is still based on AMD's Vega architecture, but this second gen Vega card still looks as though it will deliver a colossal amount of power to rival Nvidia's RTX 2080 card.

Before we start talking about how it compares to the competition, however, let's talk numbers. In addition to that 16GB of HBM2, the Radeon VII also has 60 compute units and 3840 stream processors (AMD's equivalent of Nvidia's CUDA cores) running at up to 1.8GHz, which AMD claim will deliver up to 29% higher gaming performance than their existing top-end 4K graphics card, the Radeon RX Vega 64.

More importantly, AMD says the Radeon VII will be able to deliver up to 25% more performance for the same amount of power - which is good news considering how loud and hot the Vega 64 currently runs. I'll have to wait until review samples are available to see if this claim holds up, of course, but with the card launching on February 7th worldwide, it shouldn't be too long before we can find out. 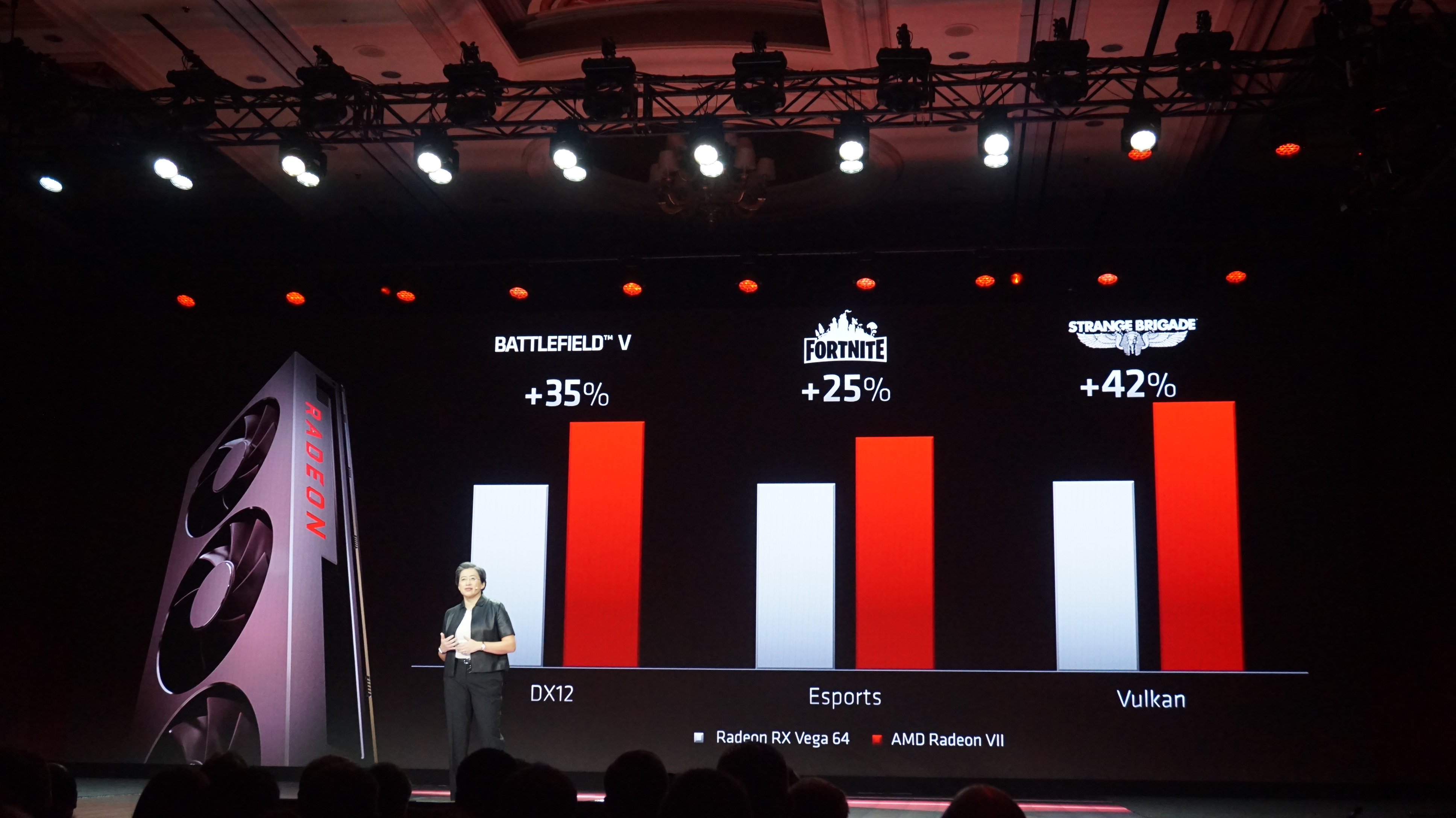 Naturally, a 4K monster card isn't going to be cheap, but with a price of $699, it's right in line with the RTX 2080. There's only going to be the single card from AMD available at launch right now, but AMD told me after the press conference that their usual crop of third party manufacturers are currently in the process of making their own versions of the Radeon VII - although quite when they'll get around to launching them is anyone's guess.

Still, from the looks of things, the Radeon VII's performance looks as though it will either be equal, or slightly better than Nvidia's high-end RTX 2080 card - at least when it comes to raw performance, that is, as AMD made no mention of any kind of ray-tracing support or any of the other magic frame rate boosting DLSS gubbins available over on Nvidia. Instead, all they announced at the press conference was support for DirectX 12 and FreeSync 2 HDR, as well as all of their existing rapid-path-math magic etc.

AMD only showed one demo with actual frame rate data - Capcom's upcoming Devil May Cry V running at 4K on Ultra settings (handily one of the free games in AMD's current games bundle) - but with speeds well up in the 75-120fps range depending on the amount of action onscreen, it certainly looks like an impressive bit of kit. Of course, I'll have to wait until the game comes out to see how the RTX 2080 fares by comparison. 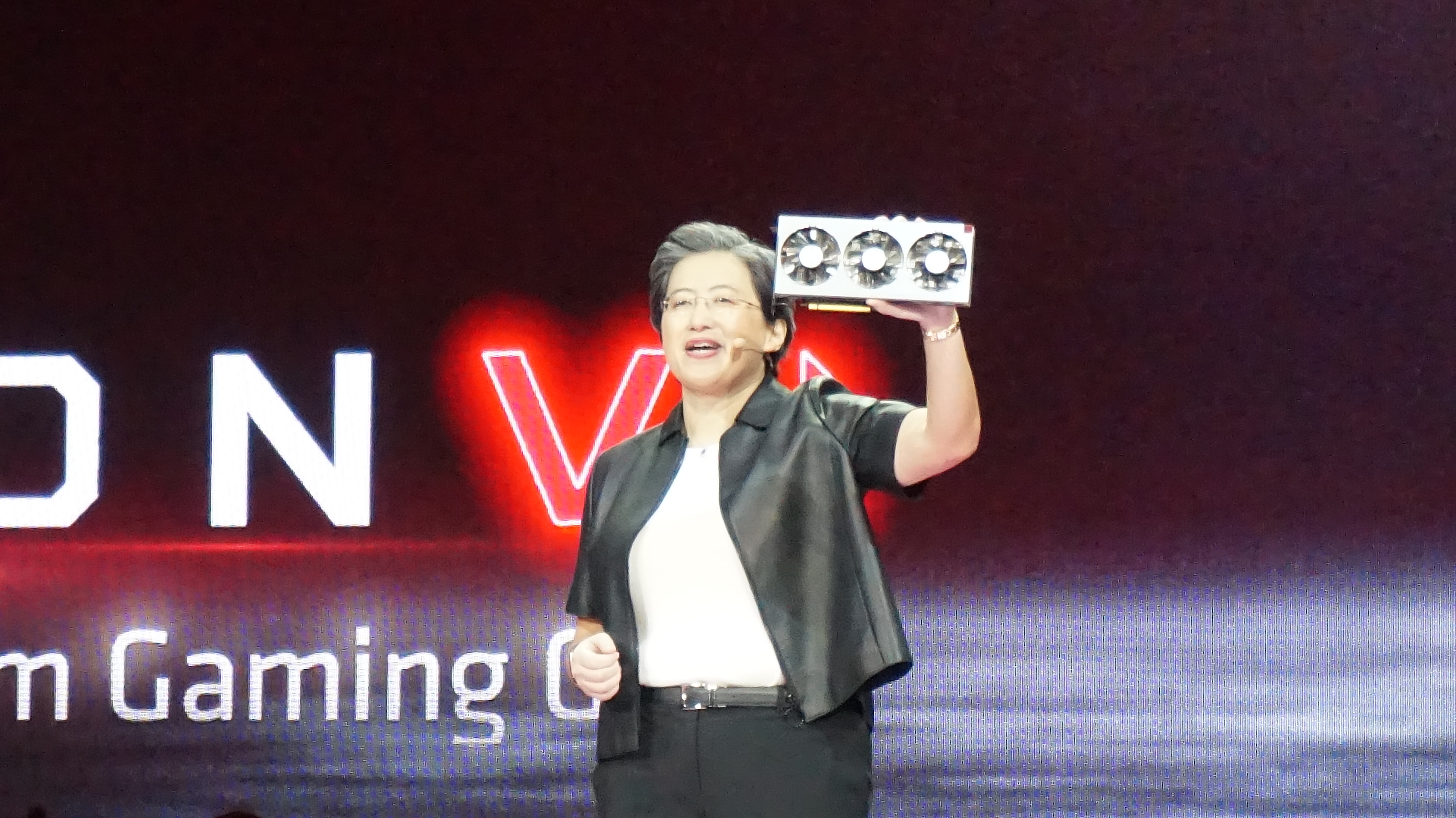 The rest of AMD's data came from some naturally rather favourable-looking graphs, with Battlefield V and Far Cry 5 showing around equal performance across the Radeon VII and RTX 2080 at 4K on max settings. In both cases, the Radeon VII was just one frame ahead at an average of 62fps on both games compared to the RTX's 61fps. Meanwhile, the final game they talked about, Strange Brigade, was way out in front for the Radeon VII, averaging 87fps over the RTX 2080's 73fps.

Naturally, the proof will be in the review pudding as to how it really compares with the RTX 2080, but from what I've seen so far, there's plenty to look forward to - and of course, the Radeon VII (and eligible Radeon VII-powered PCs) will be part of exactly the same free game bundle mentioned above, which bags you copies of Devil May Cry V, The Division 2 and the new Resident Evil II remake upon release. That will certainly help to sweeten the deal for some people out there, as Nvidia's current RTX 2080 deal will only get you free copies of Battlefield V and Bioware's upcoming jetpack RPG, Anthem.

Will it be the RTX 2080 rival we've been waiting for? I'll hopefully be able to find out very soon.