Radio Commander is a lit thunderflash tossed through a barracks doorway at two in the morning. It's arriving at the firing range and finding all the rifles in bits at the bottom of treacle barrels. It's John Wayne dressed as a coelacanth conducting the Berlin Philharmonic. It's Dad's Army dubbed into Swahili. It's Polio The Musical... wasabi toothpaste... a Slush Puppie enema... Ho Chi Minh kicking seven shades of sherbet out of a blind busker outside Tottenham Court Road tube station on a wet Thursday morning in October. 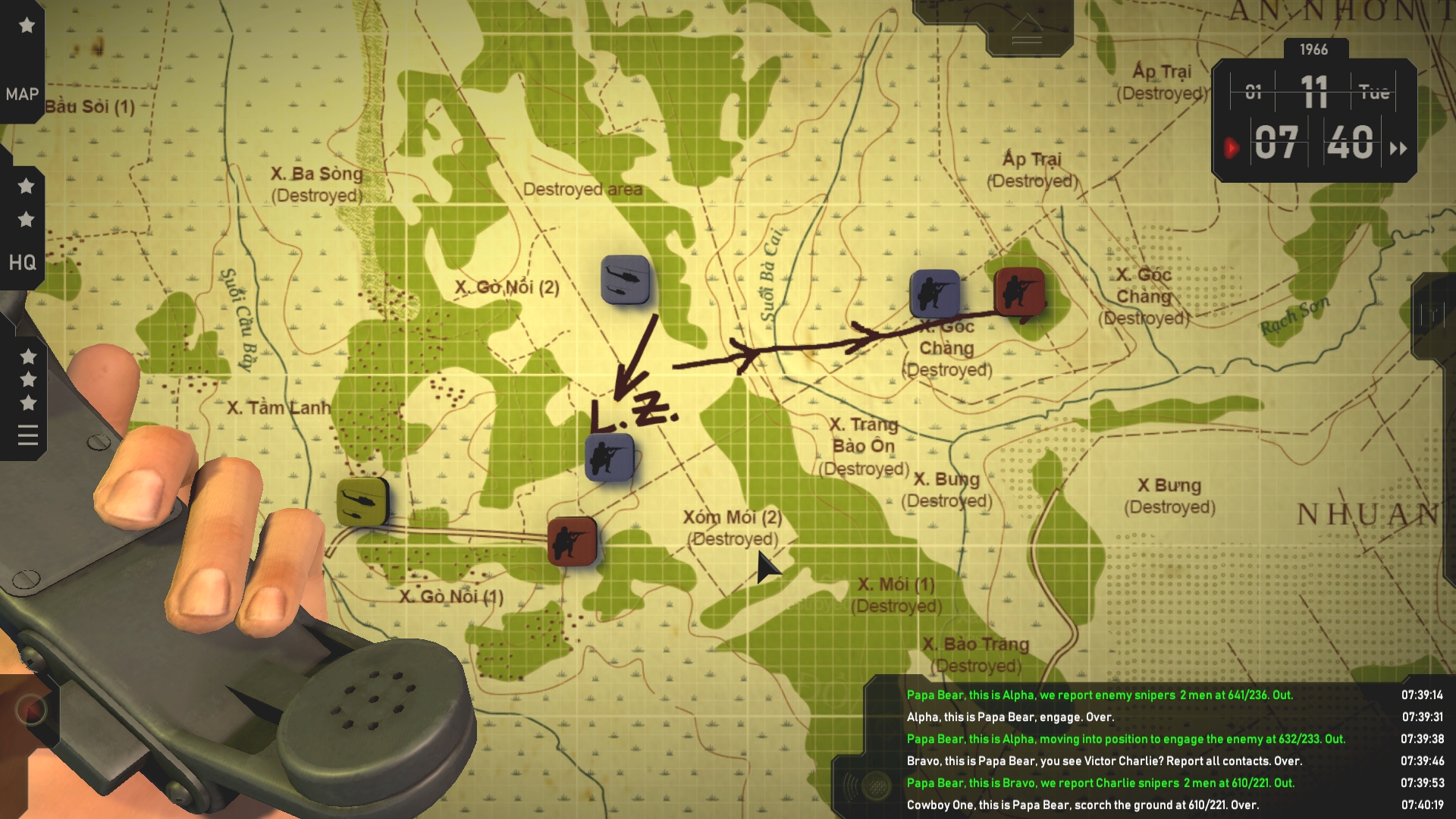 A competively priced (circa £15) turnless Vietnam War wargame, Serious Sim's daring debut effort would be very ordinary were it not for its spectacularly unhelpful maps, acute musophobia, and brave if not always entirely successful storytelling. The Polish studio has transformed a fairly primitive 'RTT' (Real-Time Tactical) game with a disappointingly short (nine missions) and failure-intolerant campaign into an uncommonly engaging command sim simply by removing most of the labour-saving conveniences forty years of computer wargaming has conditioned us to expect. Cartography sprinkled with counters that automatically move when the units they represent move? AWOL. Counters that fill screen panels with helpful data when selected? AWOL. Units that always know precisely where they are? AWOL.

In RC you move your warriors and war machines about and check their status by sending them instructions via a virtual radio set. In theory these instructions could be barked into a real microphone. In practise, most players, initially at least, will probably opt to use the rather laborious order menus in the GUI. Let's say I want to send echo platoon north to a heli-friendly clearing two klicks away. First I cursor where it says ECHO PLATOON then I dab ORDER followed by MOVE, type in or mouse-wheel the coordinates of the clearing*, choose a rate of travel (normal, cautious, or double-time) and finally press SEND.

*There is an option to input coordinates by clicking on the map, and shortcuts for mission-defined locations like bases. 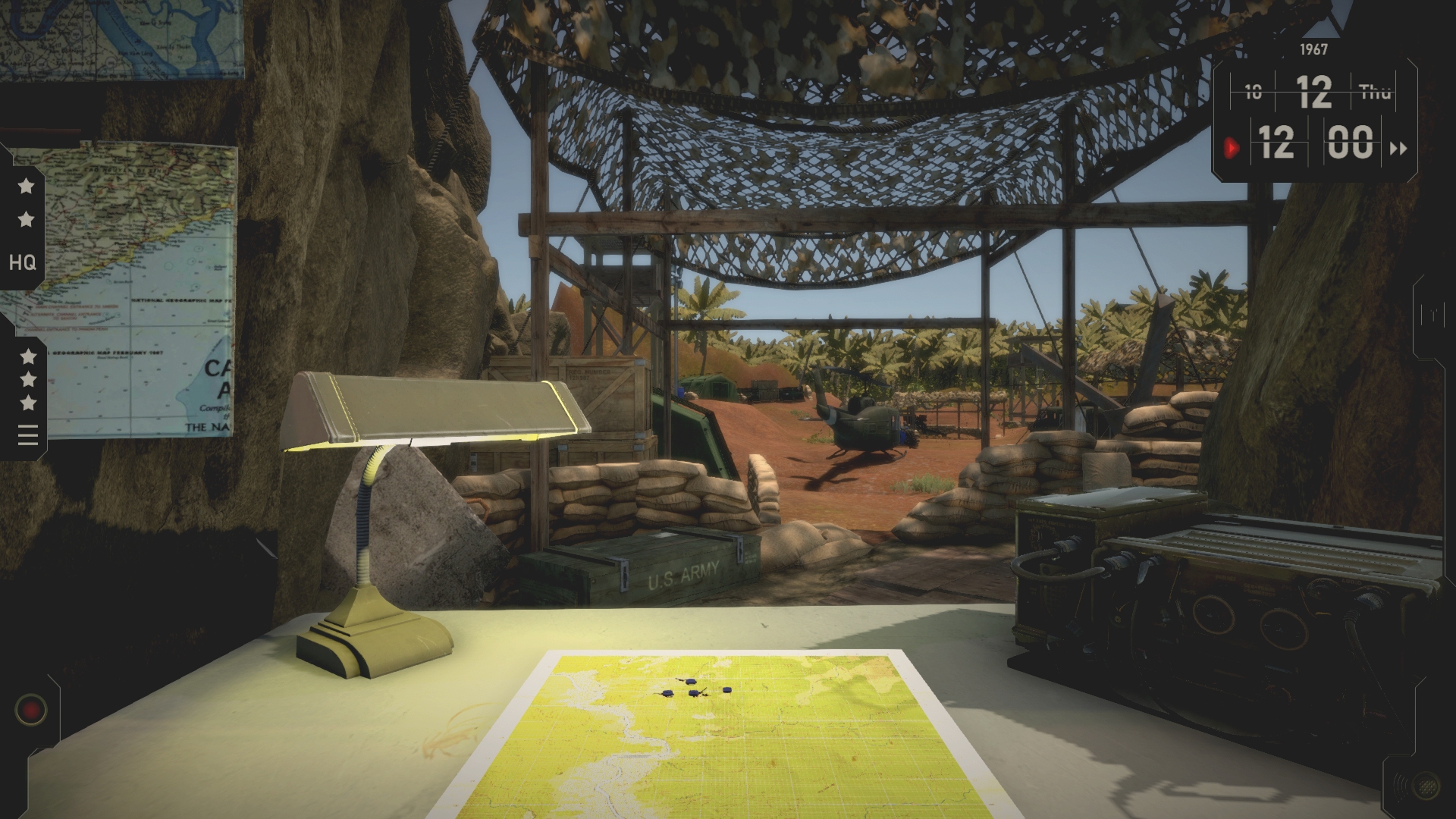 Although a lazy part of me baulked at these digit-wearying mechanics at first, the resentment quickly passed. As Peter Turcan's creations proved thirty years ago, there's something to be said for an unapologetically awkward orders system. When issuing instructions requires real effort, inevitably you find yourself considering those instructions carefully, and reflecting on the real process of command as you do.

We've grown accustomed to not knowing where our enemies are in digital battle sims, but not knowing exactly where friendlies are – a central plank of RC – remains startling. To keep tabs on US units it's necessary to transmit regular position requests, constantly monitor spontaneously generated spotting reports*, and manually adjust the chits on the annotatable map. Even then it's possible you may end up with a misleading tactical picture. In veteran mode - by far the most demanding and rewarding way to play - units sometimes get lost or misread map coordinates. In most computer wargames you spend the vast majority of your time attempting to outthink and outmanoeuvre the foe. In RC at least as much effort goes into answering the question “WTF is going on out there?”.

*Because units automatically report all new sightings, often the first indication you have of a unit arriving at a destination is an “Unidentified grunts approaching from the SW”-type message  from another unit in the area. 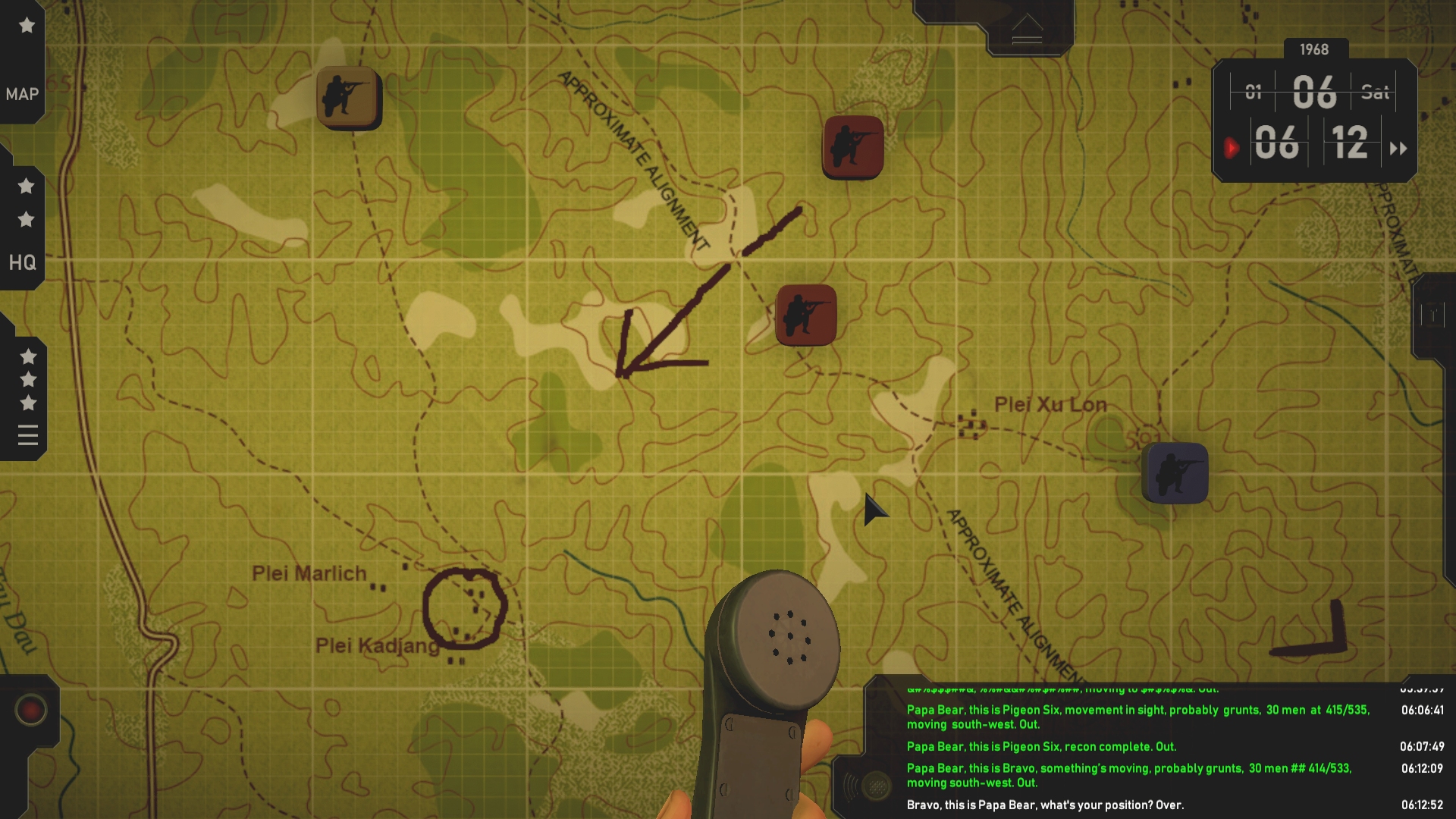 This information rationing creates tension you simply don't find in other wargames. It also takes you to ludological places you've probably never been before. In my last session satisfaction turned to mortification in the blink of an eye when I learned over the radio that the cadre of unidentified VC troops I'd just erased with help from summoned gunships was actually one of the ARVN patrols I'd been warned about in the briefing. Desperate to assist my pinned down, taking casualties platoons I'd responded much too quickly to an approaching “threat”. 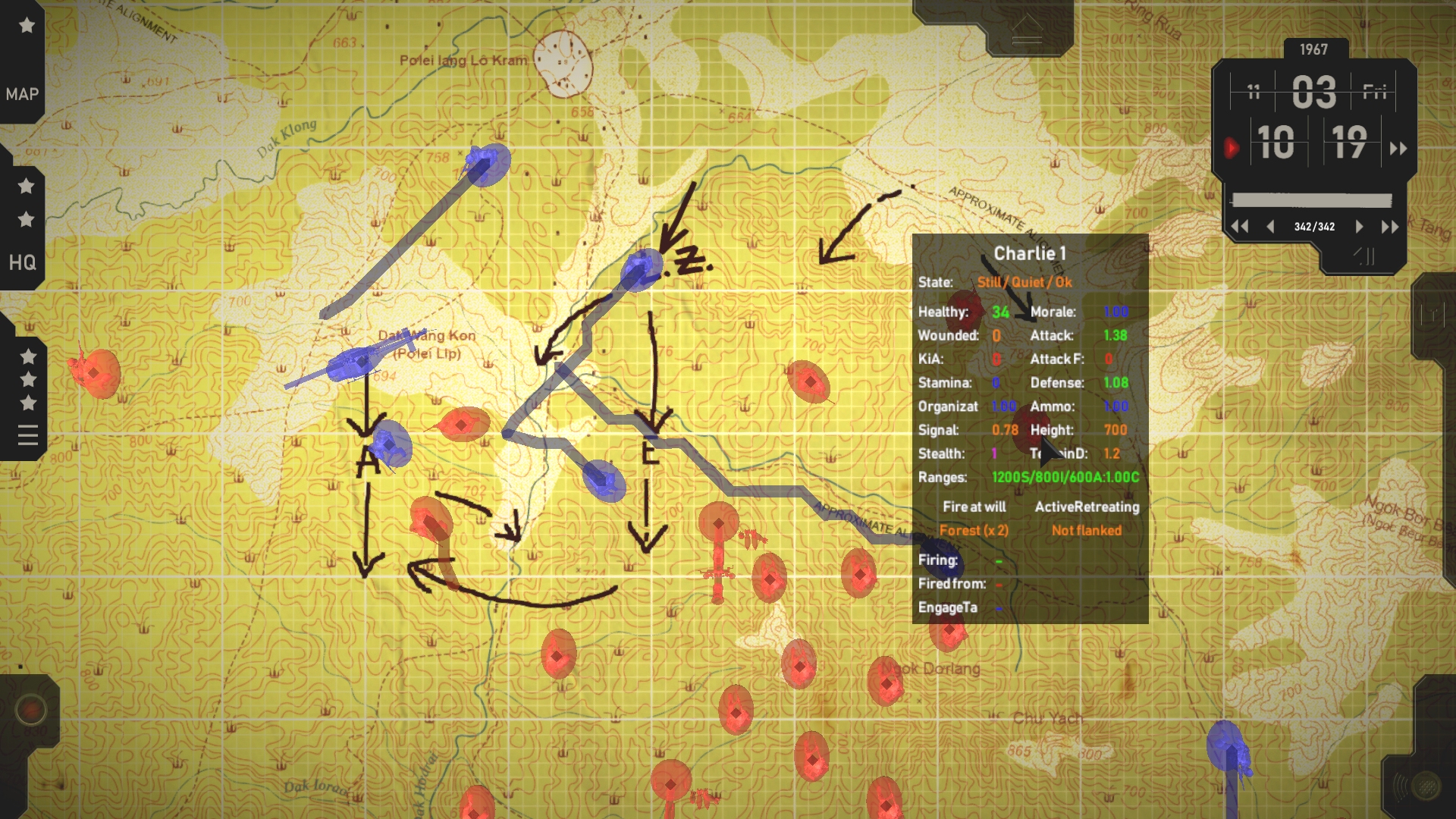 While some blunders break cover quickly, others wait in the undergrowth until the stout soprano sings. RC's post-result replays are truly compelling viewing. Revealing the movements of all units on the map, they show you the moments where you messed-up or fortuitously avoided disaster by an Indochinese tiger whisker. 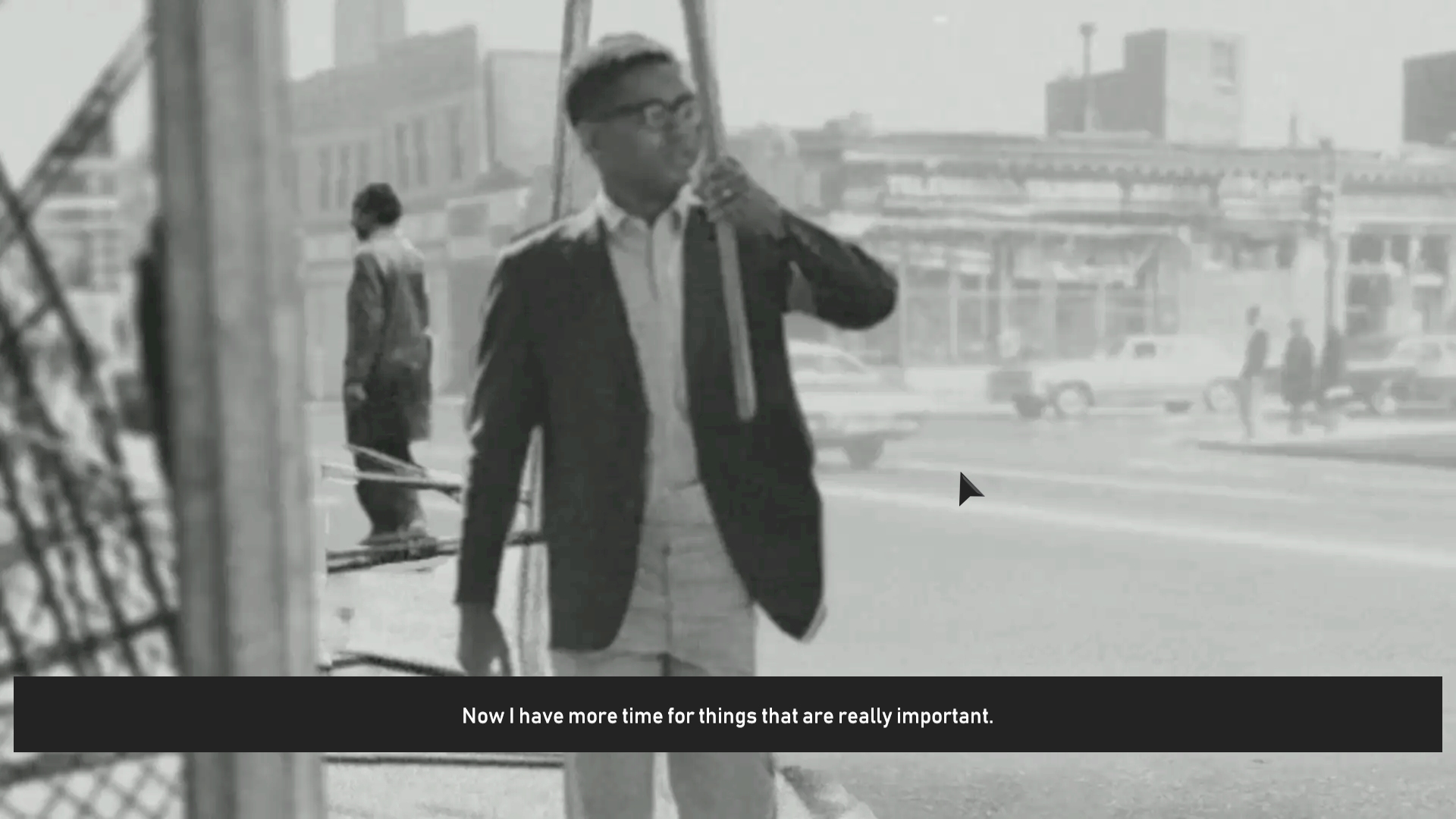 As well as shaking up the genre with seriously soupy Fog of War, Serious Sim also set themselves the formidable task of delivering gritty Vietnam War insights through character-centred cutscenes and in-mission dialogue. Though the quality of the writing (translation?) has improved greatly since the press build (“As things stand, the dialogue sometimes feels more Tropic Thunder than Full Metal Jacket.”) there are still odd moments where the words of characters harm the illusion instead of bolstering it. Lucas, a teenager writing to his conscripted brother, and Lou-Anne, a college student writing to her serving sweetheart, are plausible enough with their talk of contemporary pop music and anti-war protests, but Andrew Herd, an embedded war correspondent researching a story for Rolling Stone magazine, had me squirming in my seat with ungainly phrases like “self-concerned journo” and “hiding his fears behind a mad bully mask”.

But Serious Sim deserve credit for doing something very few wargame devs do - attempting to grapple with the moral and political aspects of war as well as the tactical. I admire them for not shying away from the darkest sides of their theme. War crimes, torture of PoWs, racism, prostitution... they all crop up in the expletive-peppered mission exchanges. 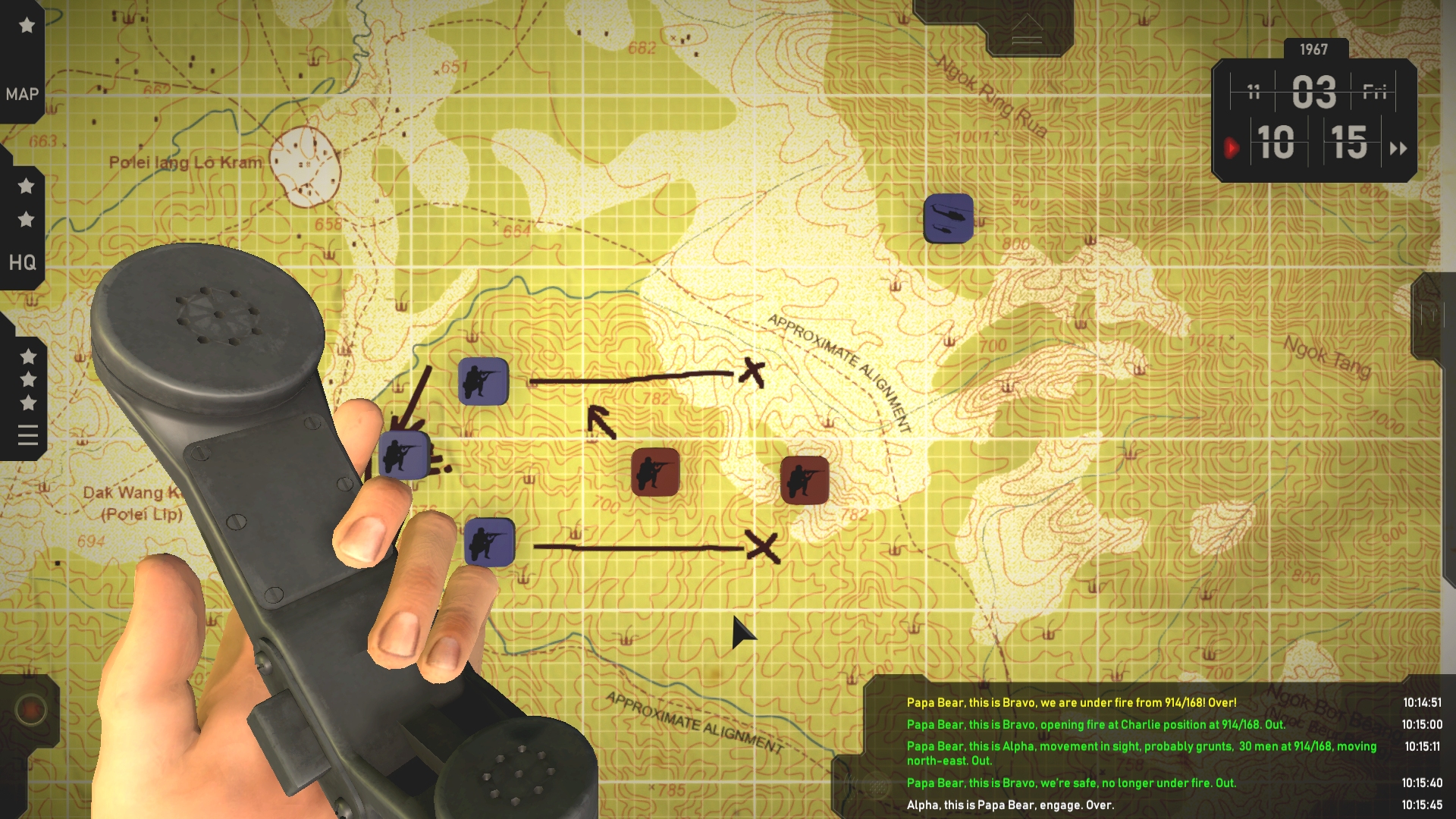 Unfortunately there are times where the game is so eager to illustrate a dimension of the war, present an ethical choice, or inject a little narrative into what could otherwise be fairly formless map rambles, it trips over itself. The nine missions that constitute the unimaginatively structured campaign all feature scripted incidents, and some of these incidents don't gel with the unscripted map roaming/foe hunting that well, or trigger as reliably as they ought to. Malfunctioning or fussy event triggers combined with briefings that sometimes aren't as clear as they should be can lead to periods of confusion. On several occasions I've found myself abandoning a mission because of poorly communicated or pedantic progress hurdles. 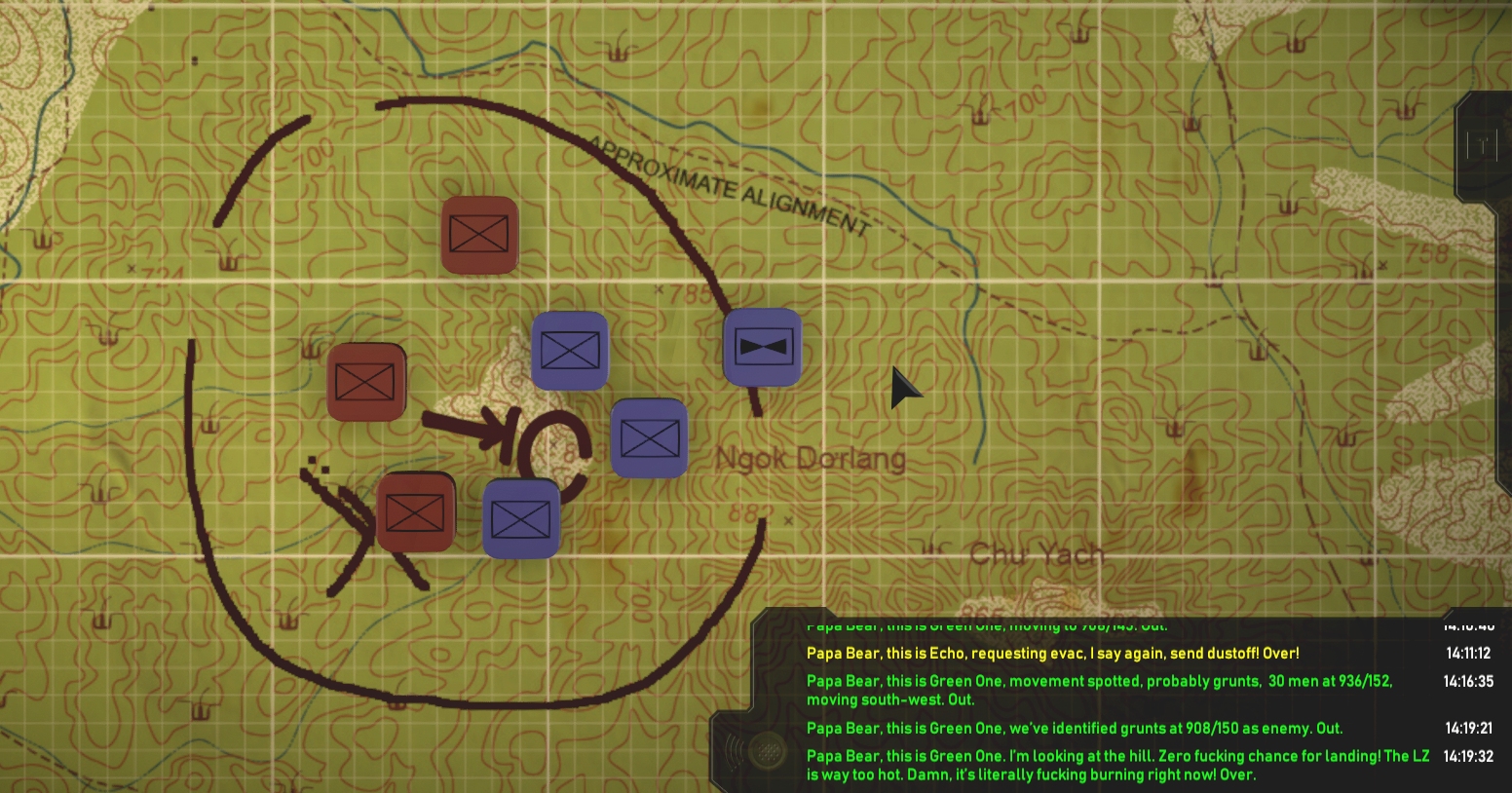 The rather limited message vocabulary of units doesn't help. I quit my last mission in annoyance after trying for ages to persuade an unengaged infantry platoon to move to an LZ for collection. Every time I issued the move order, the platoon responded with a profoundly unhelpful “Not possible in this state”. In real-life a commander would, of course, ask “Why not? What state are you referring to?”. In RC, sadly, that's not an option. 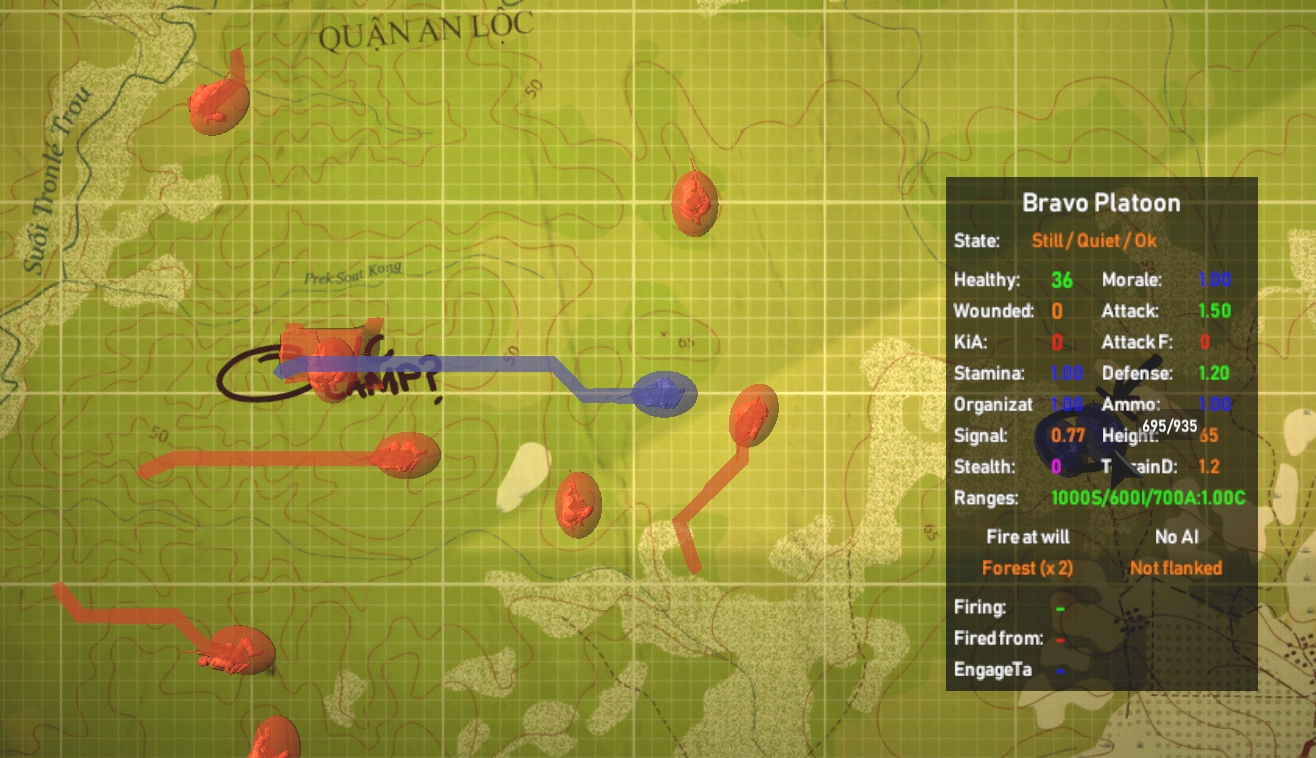 RC's COs would benefit from a broader range of orders too. That I can't split platoons, give follow/escort-type instructions, and request headcounts (losing an entire platoon means instant mission failure and, right now, there's no easy way of assessing platoon strength) particularly rankles. An improved save system wouldn't go amiss either. At present you can continue half-finished missions, but can't, I think I'm right in saying, restart a failed one from a saved point. 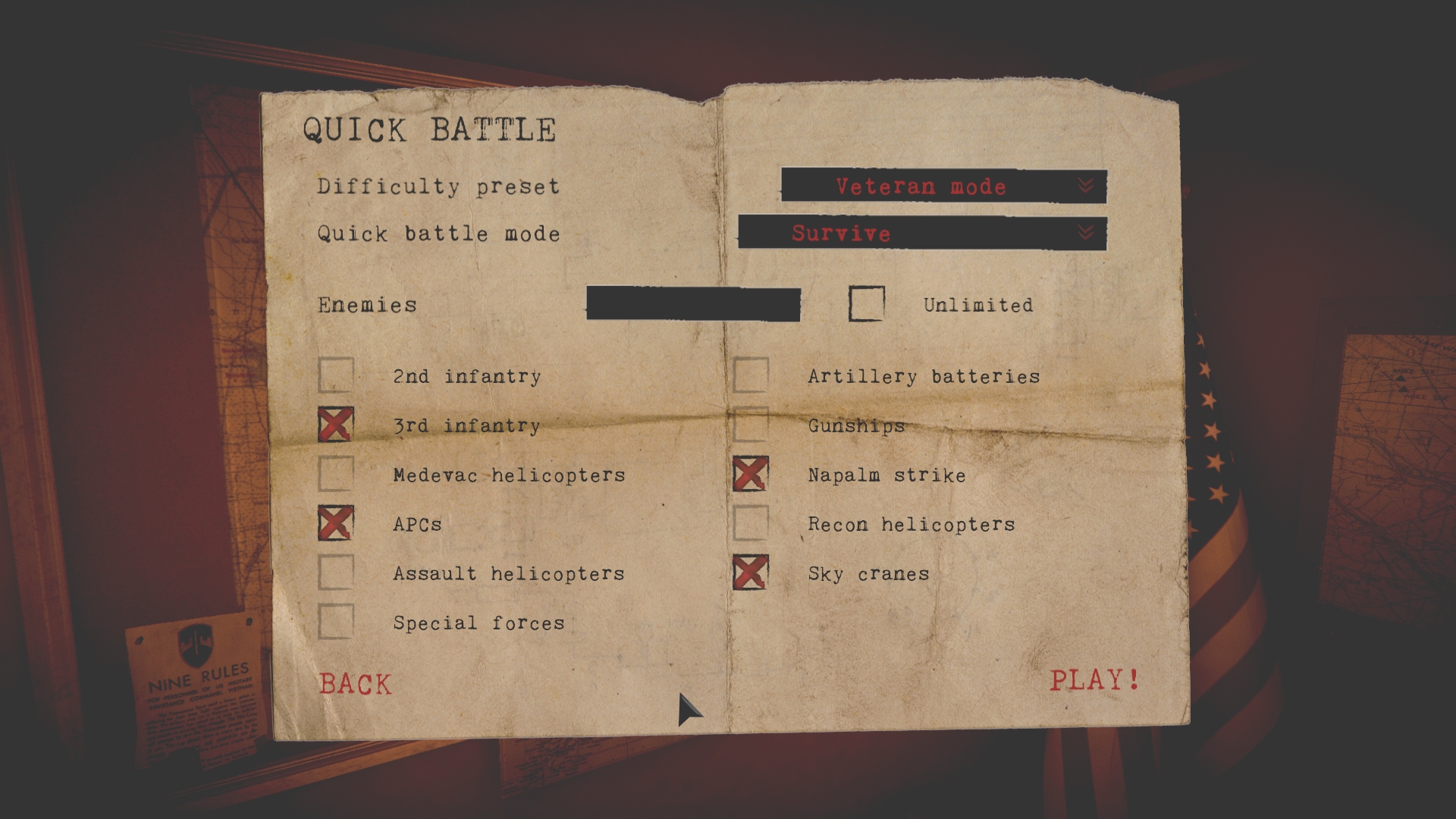 The extremely basic Quick Battle generator also cries out for enhancement. Wargamers frustrated by the temperamental missions who turn to QB in search of no-nonsense script-free tactical encounters are likely to find the lack of options disappointing. Featuring just two maps and two modes, 'eliminate' (rid area of foes) and 'survive' (hold hill for as long as possible), what should have been the game's endlessly entertaining secret weapon ends up distinctly underwhelming. 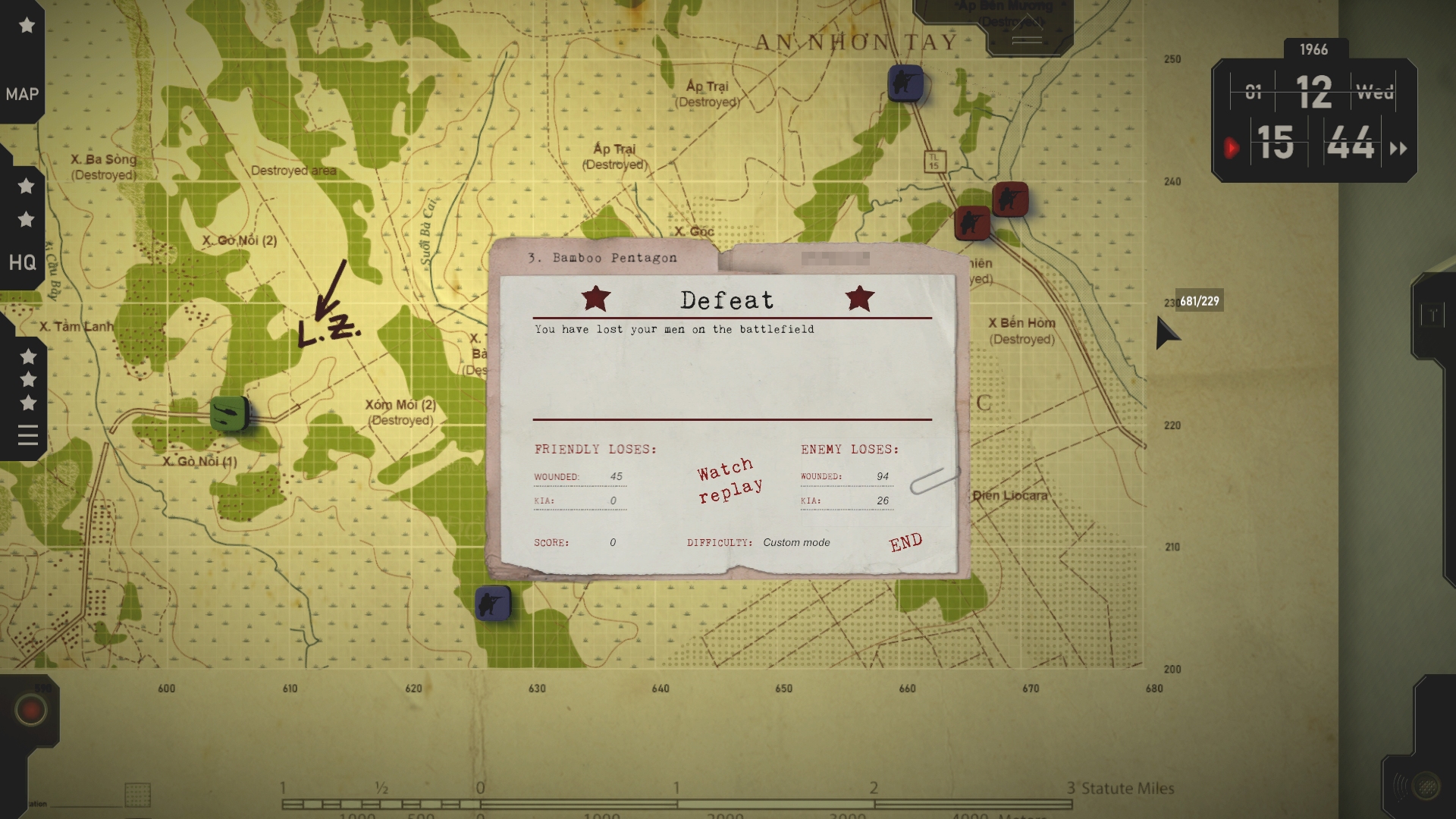 The fact that Radio Commander is, at times, one of the most annoying wargames I've ever played (failing the long and convoluted convoy escort mission seconds before the convoy arrived at its destination because one of the escort platoons perished, had me spitting feathers) doesn't alter the fact that it's also one of the most interesting and involving. I'm prepared to put up with the exasperation because I've never played a wargame quite like this before. Buy RC for the good (i.e. reality-based) frustration it produces, rather than the bad (mission-related) frustration. Buy it for an unforgettable taste of bona fide battlefield chaos. Buy it for the edginess it engenders so effortlessly. Buy it for those dry-lipped “Say again?”s that never get answered.