I was beaten to death by the bloke with the big eye. If you went through the zombie gauntlet of Resident Evil 2 back in 1998, you will recognise this large, gurgling sod. William Birkin is the zombified antagonist whose pharmaceutical experiments have turned Racoon City into a shambling shantytown. That’s fine. The same experiments also turned him into a bloke with a giant case of conjunctivitis in his shoulder. He just thrashed me to death with a big pipe. It was nice to see him again.

The Resident Evil 2 remake is five months away from release. Matthew has already fired some shotgun shells as rookie policeman Leon Kennedy, but yesterday I got to play a demo featuring Claire Redfield at Gamescom. She’s the lass with the cool leathers and the motorbike. But she’s in a dark underground facility right now, peering around with a flashlight. As soon as I saw a shadow scurrying across the walkway above me, it all came back. That’s no upcoming jump scare. That’s little Sherry Birkin. Who, aside from inheriting a ridiculous family name, is the recurring daughter figure powering Claire’s story. The Newt to Redfield’s Ripley. She huddling, as daughter figures often do, in a dark alcove.

I can help you, says Claire, reaching into the bolthole.

But Claire, bless her horror movie heart, just doesn’t get it. 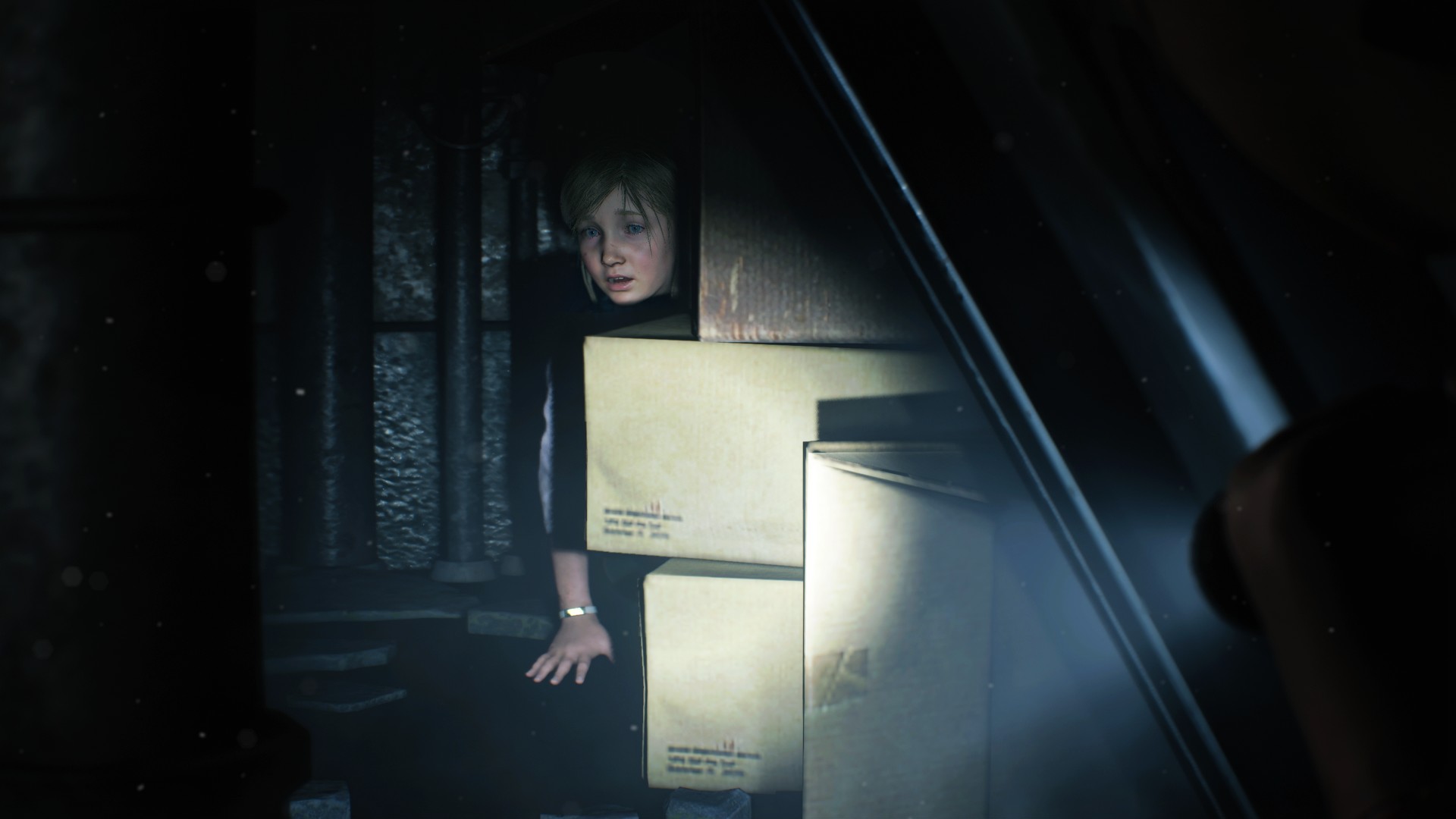 Redfield doesn’t immediately turn around and face this threat. Because sane people don't exist in the Resiverse. She just looks a bit confused and says: “What.”

Behind her, William Birkin is creeping like a creep. He attacks Claire and cracks the steel walkway. We tumble into a steamy warren of pipes and industrial machinery. It’s boss fight time: a panicked scramble among the concrete guts of a subterranean power station. Big Billy Birko is swinging his pipe around like an angry pensioner with a cane.

This is when the gun-jogging of Resident Evil 4 and subsequent Resi games comes in. You aim carefully over the shoulder, keeping an eye on your ammo count, and you can do a quick about-face with the circle button (I’m playing on a PS4 pad). It’s familiar stuff. There’s ammo and herbs lying around on the ground, which I need because Billy is wailing on me hard. I try to fight back. I fire an incendiary grenade at him. I slather him in Uzi bullets. I combine gun powder and some sort of Vaseline to make three acid grenades. He picks me up and squeezes my head. It hurts.

After a few whacks, I chow down on all my green herbs instead of doing the smart thing: combining it with a red herb, which heals you totally. Combining items in the inventory menu brings back as many memories as Birko’s yellow eye. Except it’s all a lot tidier than I remember. Not exactly modern, but shiny. The hospital-style health monitor is there too. “Danger” it says, beeping away with crimson peaks and troughs. Outside the pause menu, Claire is clutching her side and limping. Life’s hard when you’re being grabbed by the face. And then murdered. 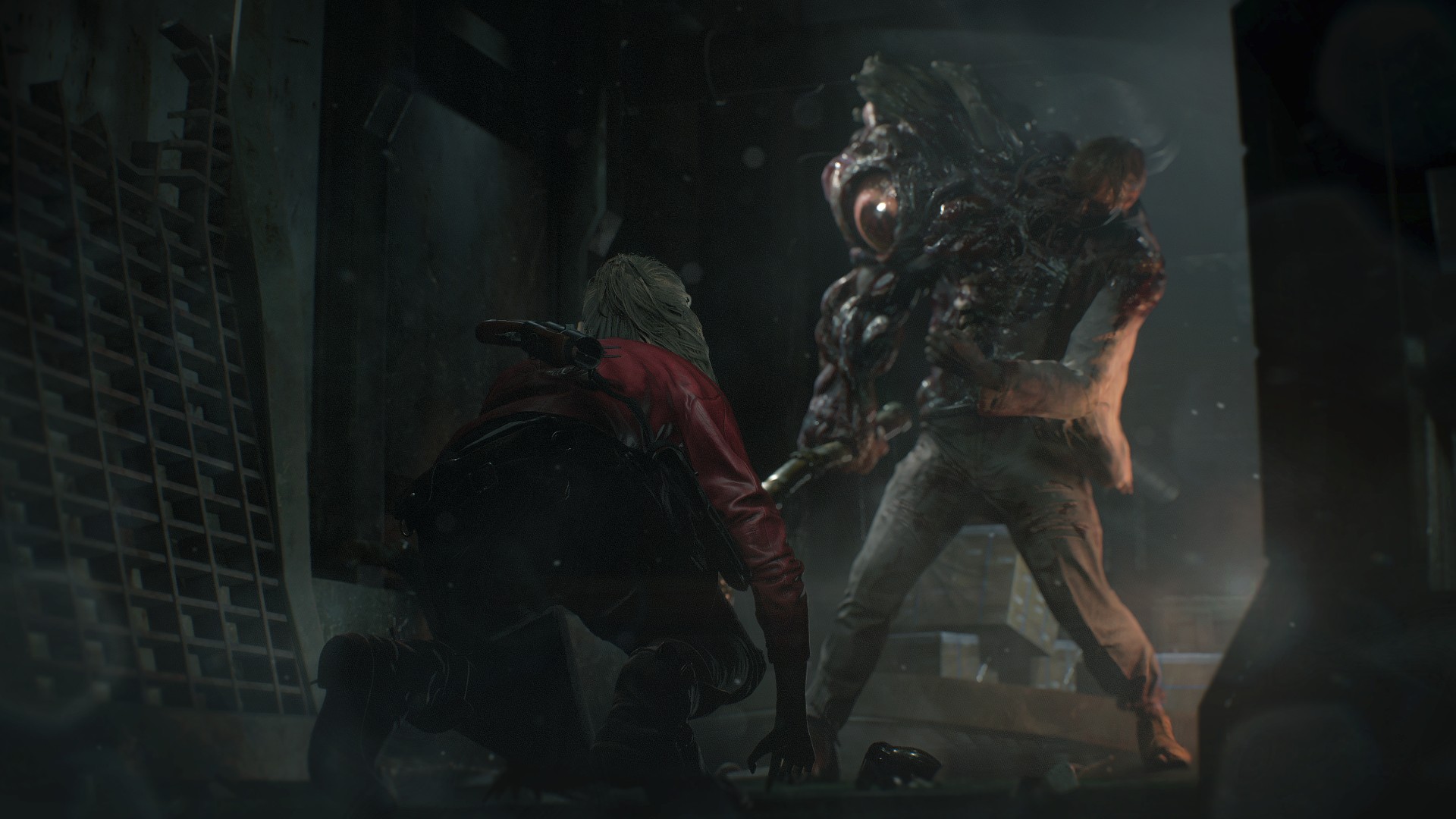 The second attempt goes a little smoother. Turns out Birking Bad over here doesn't like getting shot in the bonce with revolver rounds. And when his grotesque shoulder-eye opens up, plenty of bullets land there too. At one point he snatches me up and I have to stab him in the eyeball with my knife. That’s good. Except now my knife is on the ground instead of my inventory. I’m soon grabbed again. But this time the quicktime prompt tells me to use a grenade. Basically, if you’re immobilised, you get a quick chance to root around in your back pockets for harmful stuff in your inventory. I’m not sure if it’s a quicktimey boss thing or extended to the whole game, but it was nice to pull the pin and lob an explosive behind the gurgly flesh doctor.

Finally, Birkin relents, and bumbles off a ledge into the depths below. Seeing all this unfold is giving me flashbacks. Cuboid figures with fuzzy voices, a sewer with a crocodile, a giant piece of... tofu? The memories don’t stop. After the boss battle, I pick up my knife. Sherry and Claire wander into a car park, where a man in slacks threatens us with a revolver and a moustache.

“Oh! Chief…” I say aloud, trying to summon the name of this rotund antagonist. “Police chief….”

“Chief Irons,” says a nearby PR person. That’s it. Police chief Irons. The massive vest-wearing asshat. He threatens Claire with a magnum and gets Sherry to tie her up. Then he roughs up our hero a bit, just to make sure we know he’s a bad one. Finally, he takes off with the little girl and locks a gate behind him, leaving Claire with a bleeding lip and a bad mood. These cinematic moments make me feel weird. They are dredging up lost memories and re-writing them at the same time.

Other things have changed since the late nineties. The save system has been re-worked, we’re told. There will be auto-checkpoints now, rightly expected by today’s zombie-killing youth. However, there’s also going to be an optional difficulty that lets you play with the old typewriter save points. For the survival horrorphiles who missed Resi the first time round: these were rooms of safety and solace, always containing a game-saving typewriter. But you could only use the typewriter if you had an “ink ribbon” to spare.

If I go back to Racoon City, I’ll probably avoid that particular bit of dogma. Purists might argue the sense of reward and safety you feel at finding one of those beautiful black machines is a necessity. But if you can recite the sound effect of a saving typewriter, click for click, you’ve probably earned an easier time with the auto-saves. That the option exists is praiseworthy enough. And I won't begrudge the folks who do want to scoff every crumb of nostalgia they can find, even if those crumbs result in moans of despair.

That goes for the controls too. They aren’t quite tank controls, but they are tank-like. Modern action games have taught me to press a button which expressly dodges flailing monsters. Here, there’s no such luxury. Basically, imagine if Resi 4 got shatterblasted and woke up in Racoon City. As such, you’ve got to sidle out of danger as best you can, with quick turns and short jogs to the other side of the room. There is some flexibility to the movement, in the form of a half-hearted sidestepping. But I wouldn’t call it fluid, exactly. It feels rigid and sometimes old-fashioned. That’s the point, of course, but it didn’t stop me feeling a twinge of frustration at the stiff turns and narrow spaces. But this is the eternal curse of the remake. Being truly faithful means preserving blemishes too. If this was a “reboot” it’d take the old and make it new again. A remake is often antiquated by design.

Whether that’s a flaw depends on how far your adoration for both Resi 2 and Resi 4 stretches. Mine stretches part-way. It made me smile to see the birkos and jerkos of a gory horror game I first played as a (naughty) 10-year-old, all of them now glammed up, given new voices and new faces, yet familiar roles. It was like seeing some childhood toys rescued from the attic. But then you try and bend the limbs and find that they’re stiff, they’re dusty. No, it doesn’t diminish the happiness you feel at the sight of your Leon Kennedy action figure, but it does make you a bit sad to see him so out of shape. 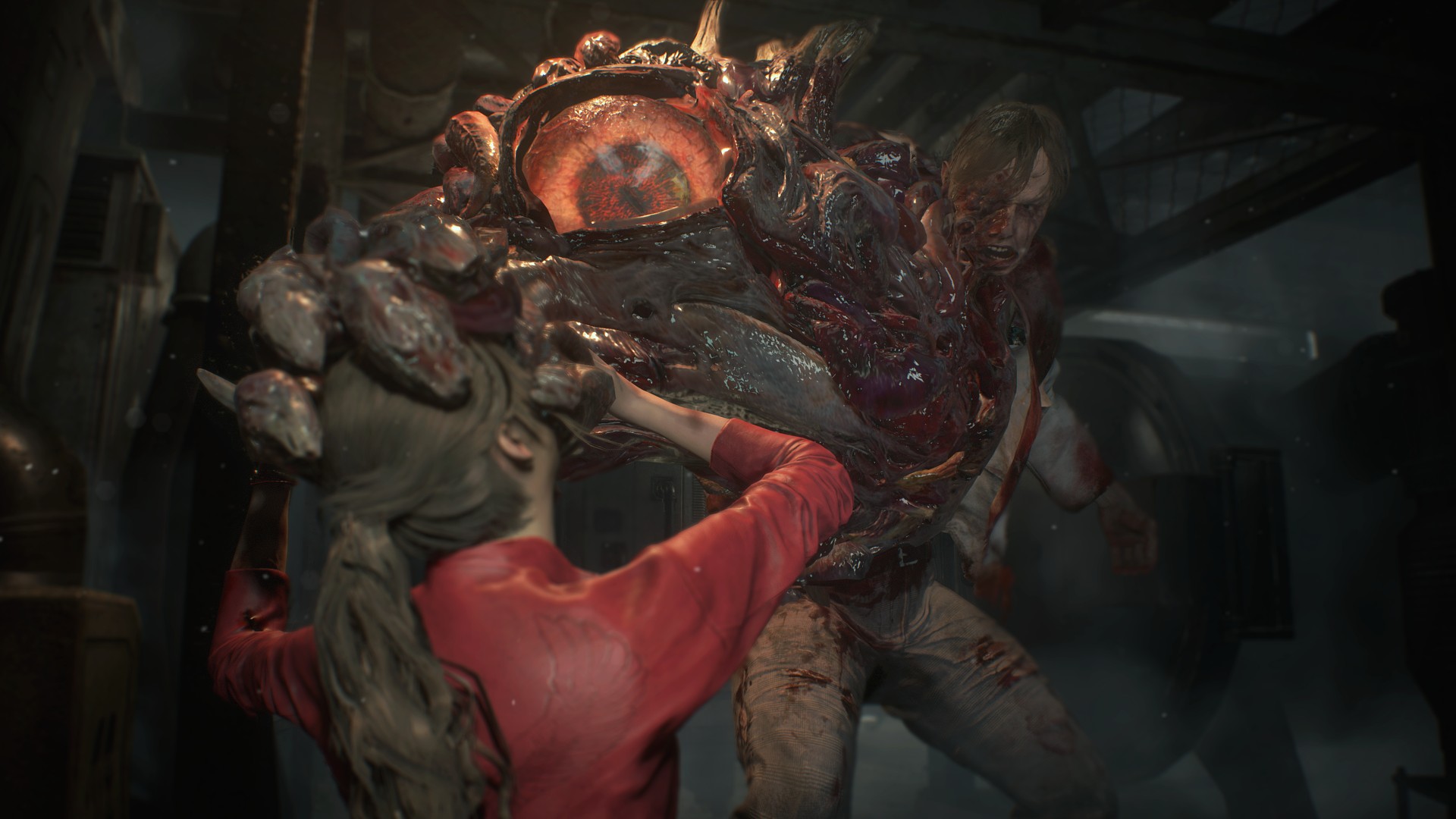 Of course, that metaphor only applies to the tankiness of the controls. The camp, bloody horror picture that accompanies the combat is as much an invitation to return as the Resi 4 shoulder cam. The confined Birkin fight probably wasn’t the best set piece to use as a demo, but I have enough of a tolerance for Resident Evil’s quirks to forgive the odd frustrating boss. Let’s give the Birk a break. He’s seen a lot. Through his shoulder.