Out of nowhere, sci-fi colony management sim RimWorld launched its first expansion today. Royalty is its name, and adding a spacemonarchy with courtly flair but futuristic gear is its game. Befriending the monarchy sounds exhausting, with their posh demands and their harpsichords, but they can deign to give you access to high-tech troops and gear including technopsychic warriors and plasma swords. It all sounds somewhere between Warhammer 40K, Dune, and Louis XVI? Today also brings Update 1.1, the one adding geese, to all players.

The Royalty expansion adds the Empire pootling around space, a load of toffs with expensive tastes, courtly traditions, and some real nice weapons. Colonists will be able to gain titles from the Empire, which gives them great tools like psychic weapons and the ability to call in heavily-armed troops. But they'll also become right royal pains in the bum, demanding fine rooms and special treatment while acting like they own the place. It does sound worth it for legal access to psychic amplifiers, mind. The blurb explains:

"Those who hold one can use their mind to manipulate and defeat their foes. Psycasters can blind enemies or mind-control them, block sensations of pain or confer deadly focus on an ally. Advanced psycasts induce mass vomiting in crowds of foes, teleport objects or people, drive enemies insane en masse, or render allies temporarily invisible for stealth attacks."

So I can have a psychic spacemage with an entourage of ducks? Alright, cool.

Loads of new royal quests are in to build our loyalty, from demonstrating our hospitality to dealing with terrible threats. Those can earn us the Empire's special implants, plasma swords, and other such treats. It's not all sunshine, mind, as the expansion also gives mechanoids the ability to create mechanoid clusters - compounds with awful goals from poisoning the air to spitting out new mechmonsters. 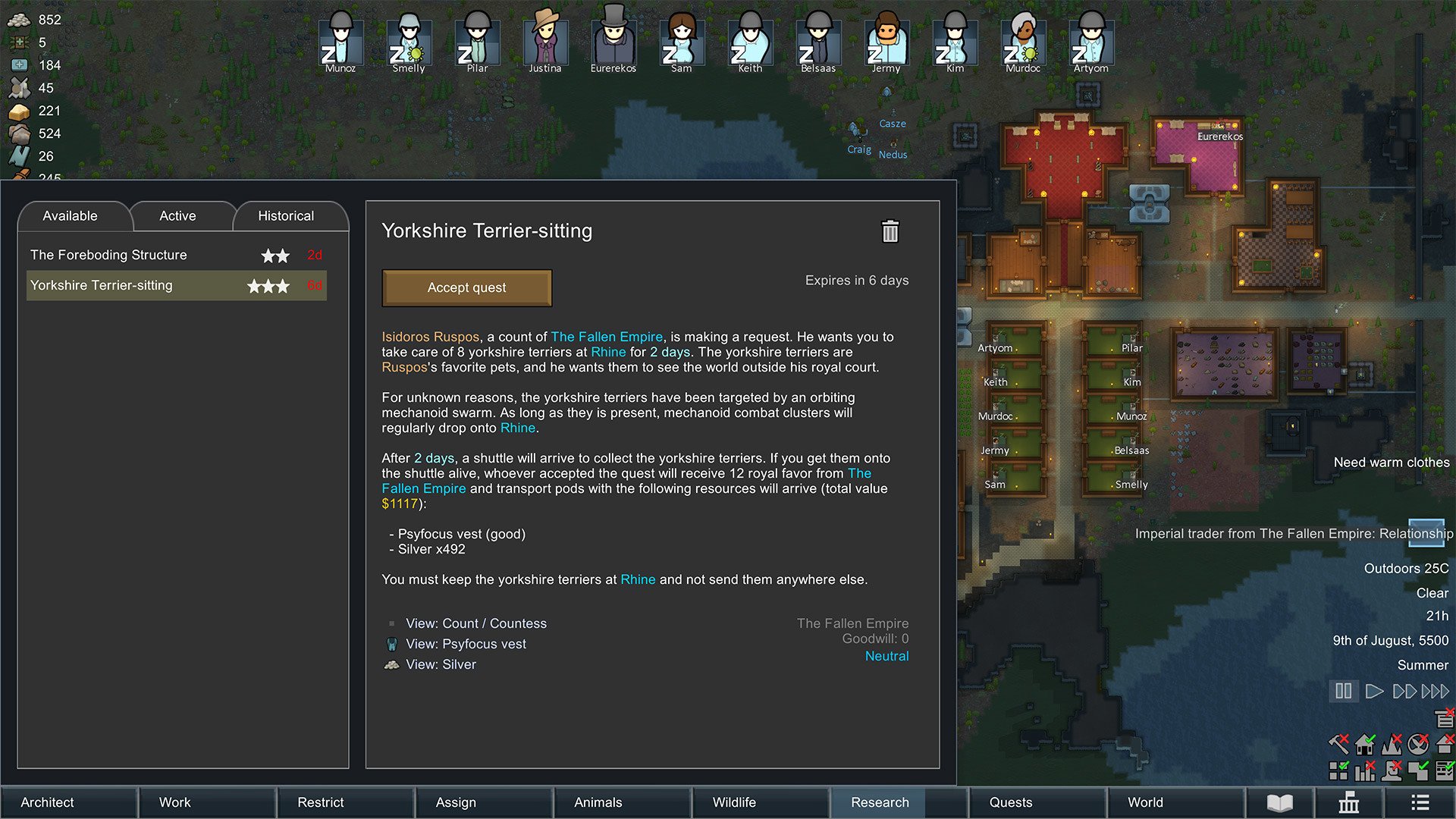 All players, whether they buy it or not, will benefit from the new Update 1.1. It brings UI improvements, performance optimisations, new animals including geese and guinea pigs, and more. See the patch notes for more. If you're not using mods, save files should carry over just fine. Mods will need to update to support 1.1, though. If you're using mods which haven't yet updated, you can manually revert RimWorld to version 1.0 to keep on playing with your old saves and mod setup.

Because this is the Internet, some folks are upset about a £15 new expansion launching for a game they'd thought was over. Creator Tynan Sylvester explained the sitch on the Steam forums:

"Right after the game released in 2018 I started work on a free update, and soon after that an expansion. Hired a bunch more people, head count is now more than double what it was during RW development, so we're able to develop two things at once. That's how we built the free 1.1 update and the expansion at the same time. I've worked on it directly the whole time.

"If you look back to the RW release announcements, you'll note that I said the game is done but I'm not necessarily done with it. I've never been against expansions if they add meaningful new experiences without detracting from the base game. It's a great way to enrich a game after the base game has been stretched to completion (which it was after 5.5 years of development). And it comes alongside a free update with a bunch of new stuff because some improvements just didn't make sense not to give to everyone."

For folks imagining Royalty was a mish-mash of existing mods, Sylvester added "Also worth noting that the only modder we hired was Oskar to do art, and the only mod content in the free update is Oskar's animal art. The expansion is 100% original."

It's wild that some people are so put out, considering RimWorld was not a small or short game. We recently declared it the best management game, you know.