Premature Evaluation is the weekly column in which we explore the wilds of early access. This week, Fraser’s hawking his wares to the ravenous consumers of Rise of Industry, a tycoon game about growing berries and other less important things.

You’ve got to give the people what they want. Booze, sex, tasty little berries harvested from a local plantation and driven straight to the farmers market - these people have needs, and for the last week I’ve been spending my evenings with Rise of Industry trying to fulfill them. Well, the need for berries anyway. People go nuts for them - but they don’t care for nuts - and I am the Berry King. 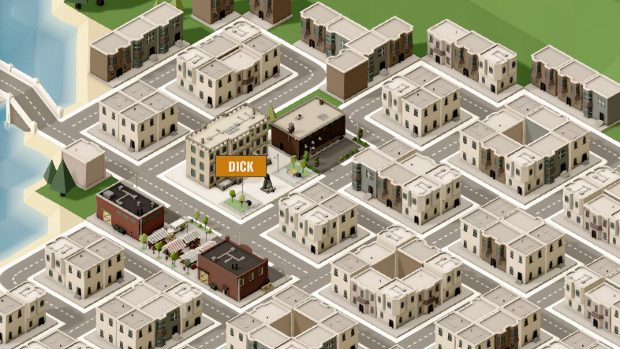 The town of Dick (the random name generator got a bit cheeky) was a quaint little place with a farmers market, a hardware store and a single road out of town that connected it to neighbouring West Will, across the river. The people of both towns had a hunger for berries, and with the farming specialisation picked, I was in an excellent position to sate their fruit-lust.

Rise of Industry lets you build whatever businesses or bits of infrastructure that you need, as long as you’ve unlocked them in the R&D menu, but you still have to pick a specialisation that allows you to unlock some buildings faster. I wanted to impress the fine folk of Dick, however, and that meant showing them I was a multifaceted entrepreneur with a diverse business portfolio. The oldest seduction technique in the book. 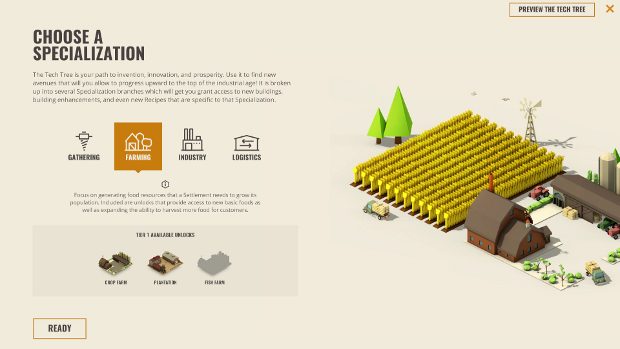 So not only did I plonk down a new berry plantation, I recklessly spent money on a water siphon, several water harvesters and not one but two truck depots, one for the farms and the other right next to Dick. Rise of Industry’s fetching but minimalist presentation meant that I couldn’t actually tell if the people of Dick were throwing a parade in my honour, but it really did seem like they were. It felt good.

I didn’t get much time to enjoy being the Berry King, lamentably. Dick was quite small and its citizens quickly filled up on berries. My tiny spheres of juice started selling for considerably less in the farmers market. I expanded the operation to West Will, sending my berries to the truck depot, where larger vehicles would transport my fresh fruit across the river to the third truck depot I inexplicably decided to splash out on. 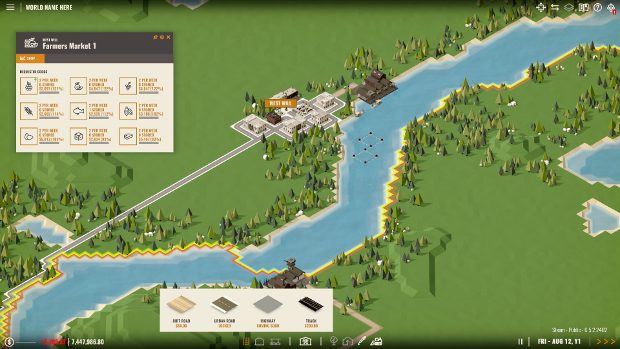 West Will got sick of my berries even faster than Dick. They did want cocoa, however, and sugar, and I could make both. More money was spent and more plantations popped up in the outskirts of Dick. All these extra products were more things I had to juggle. With a small business and only one or two places to send goods, Rise of Industry is an elegant but simple production sim, but when logistical conundrums are thrown into the mix, with trade routes that span the entire map and move everything from glass to corn all across the region, things start to get tricky quickly.

Food was getting sent all over the place as I threw money at towns so I could get permission to start building new roads and, yes, more truck depots, connecting Dick and West Will to the rest of the region. But then something went wrong in my increasingly elaborate chain. One of my trade routes was broken. An alert appeared telling me that the first stop wasn’t picking up goods. The bafflement began. 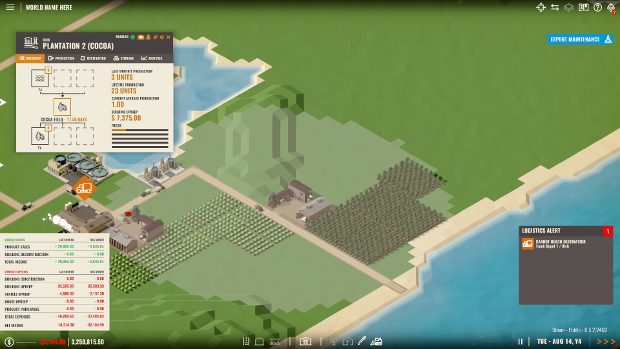 Rise of Industry is pitched as an accessible tycoon game, and it doesn’t overwhelm with details or imposing menus, but some of the details those things might provide would actually be handy. Alerts only ever offer up a single vague line, so I had no idea what was causing the problem or where it was happening. Even ‘first stop’ is frustratingly opaque. If a truck starts its journey at depot 1 and makes its first stop at depot 2, then obviously depot 2 is the first stop. But depot 1 had the alert symbol, so… surely that’s the one?

Four or five buildings were involved in this trade route, along with a multitude of trucks and a long stretch of road. Any of those things could have been the cause of the break-down. After remaking the route, an entirely different alert appeared, warning me that trucks couldn’t get to their destination. More faffing. More dramatic sighing. Eventually I realised that there was a broken road connection. The new road I’d created hadn’t joined up with the old one properly, but it was almost impossible to tell without zooming in as far as possible. 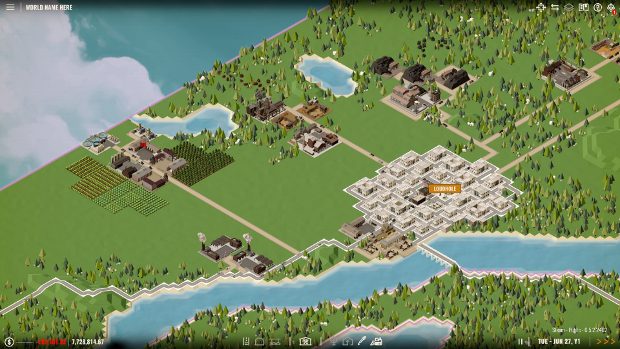 Even once I got everything moving again, Berry King Corp never really got back on top. I’d burned so much money on truck depots that I couldn’t even expand to a new area. When the tutorial told me truck depots were important, I guess I took it to heart a bit too much. No more new towns would be able to enjoy my wonderous produce.

The logistical conundrums should be the best parts of a game like Rise of Industry. And up until something goes wrong, they often are. When you manage to squeeze just a bit more production out of a struggling farm and send that produce all the way across the map in massive convoys of trucks, depot to depot, it feels like an achievement. But the time I've spent fixing and tightening up my production and logistic network, bleeding every last dime out of each town, has been dwarfed by the slog of figuring out why, exactly, my lucrative routes have dried up. 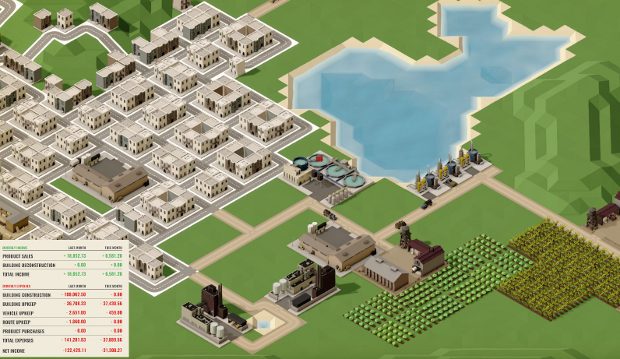 Sometimes you won't even realise something has gone wrong until you start hemorrhaging cash. While the aforementioned alerts will let you know when a trade route is broken, minor issues can quickly rack up without warning, to disastrous effect. What's really missing right now is a central screen that gathers the most important information in one place. There isn't even a proper budget screen at the moment, just a summary. You end up needing to bring up five different menus just to get an overview of the business, and suddenly that neat little UI starts to look like a mess.

Berry King Corp died, leaving behind only fallow fields and the memories of summer fruits cherished by the people of Dick. My big mistake, perhaps, was investing in the farming racket. I should have gotten into the manufacturing game. Tables and vases and stuff. Things real people need, not like fruit. 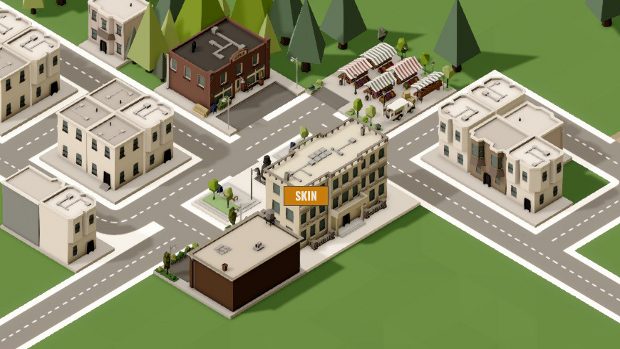 Rise of Industry has a long list of recipes that can be manufactured, from basic wood furniture to high tier items that can't be made until you've worked your way down the R&D screen. It's another layer of complexity, but adding manufacturing to the production and logistic chains also makes them a lot more fun to play around with.

While specialisations and the rate of R&D point generation encourage a really focused approach, the game doesn't really come into its own until you start expanding into new areas of business. Without the additional wrinkles that come from trying to manage a broader company, Rise of Industry currently hits its endpoint a little too quickly. 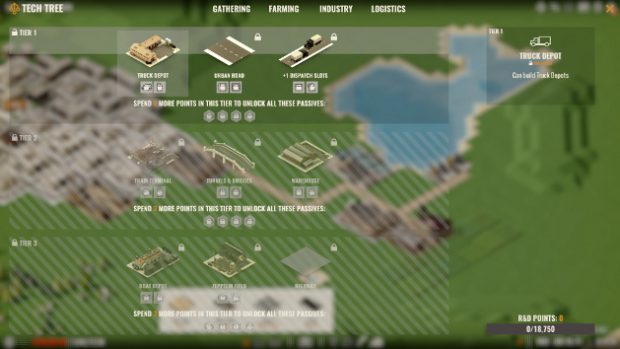 After you've been put through the wringer a couple of times and learned what pitfalls to watch out for, probably by falling into them, your main concern will become trying to avoid oversupplying towns, which oddly seems to require cancelling routes rather than setting limits on how much you deliver. That way prices will remain high. If you're focused on one industry, you'll reach the point where you're just staring at the supply and demand screens for long stretches pretty quickly. The only way to spice things up is by adding another industry.

With all these different types of goods needing to be transported, sometimes all over the place, sometimes to just one or two towns, that’s where railway lines, or even, and I've yet to reach this point but gosh am I looking forward to it, zeppelins come in. It's not a transport tycoon game, but you're still ultimately laying down tracks and roads and trying to make the most efficient routes at the lowest cost. It's still pretty involved, then, but it doesn't require you to spend hours fiddling with junctions or dealing with congestion. 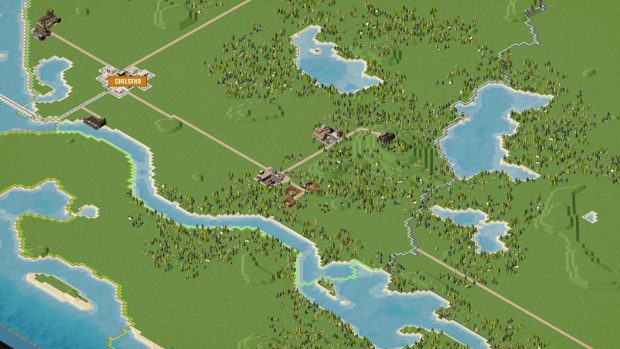 Diversifying is even more important when towns start to grow. As their needs are serviced, towns expand and prosper, their demands evolving, encouraging you to adapt. They also swallow up a lot of space you might otherwise build on, so you need to start thinking years in advance. While people might like buying your stuff, they don't want to live next to your factories - take it from someone who lives in sniffing distance of a tannery - so as towns start spreading out, you need to keep an eye on how close they're getting to your industrial areas. Actually seeing your impact on a town, and the fact that it goes beyond just its physical dimensions, makes it feel like you're playing with an ecosystem, not just a capitalism sim. I'm really eager to see how far developer Dapper Penguin Studios takes it because it's a compelling system.

The way a town organically evolves does nudge you in certain directions, indirectly, but beyond that there’s not a lot for the player to react to. There are no missions, for example. Some clear objectives would do a world of good in the currently aimless career mode, where you’ve got a big stack of cash and a random map to play on. 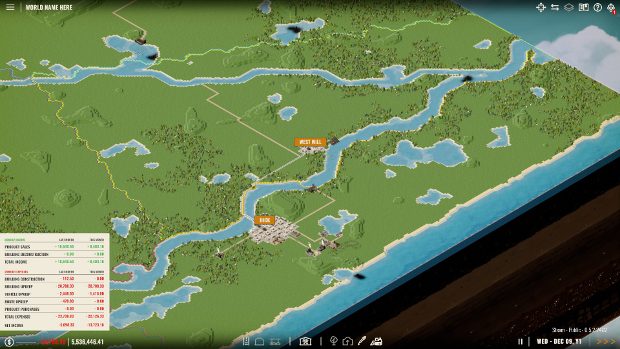 It's a better place to begin than free mode, as you're not just given every single building and told to go nuts. There's a bit more direction. But, despite the events that were added this month, when it hit early access, Rise of Industry could still do with some more bespoke challenges to push players into experimenting with different industries or try their hand at gaining a monopoly. Anything that can shake things up and generate a half-decent anecdote would be extremely welcome.

That does seem to be coming, though, along with a whole lot more. Dapper Penguin has a public roadmap that you can check out on Trello, and it's got a lot to get through before launch. Pollution events, scenarios, island maps, massive cities, contracts, modding -- it's an ambitious list, though it looks less impossible when it's split into six stages. And so far the studio has kept up a consistent supply of updates. It’s grown a great deal in the last few months especially. 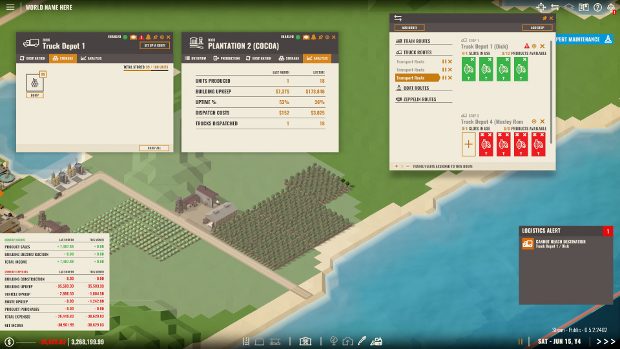 In trying to strike a balance between complexity and accessibility, Rise of Industry has hidden a lot of the nitty gritty details that you really need to understand how well your business is doing. It arguably makes the game harder, even if it’s initially less daunting. And while I’m getting into a rhythm now, and maybe even starting to click with it, the huge amount of time I wasted searching for proverbial fires instead of putting them out is still fresh in my mind. It’s full of neat ideas, however, and the next couple of updates might tempt me back to Dick.