The Roccat Vulcan has been sitting at the top of my best gaming keyboard list ever since it first came out at the beginning of 2019. Its superb build quality and Roccat's brilliant mechanical Titan switches were a winning combination in my eyes, so I was extra intrigued when they announced that not only were they making a smaller, tenkeyless version of the original Vulcan, the Vulcan TKL, but that they were also introducing two new Vulcan Pro models with their new Titan Optical switch as well. I've been testing the smaller of these two Vulcan Pro models for the past couple of weeks - the Vulcan Pro TKL - and I can confirm it's every bit as lovely as the full-sized original.

A large part of that is down to those aforementioned Titan Optical switches, which have been developed in house at Roccat. Optical gaming keyboards are even faster than your typical mechanical keyboard, as they use beams of light to detect your keystrokes instead of relying on moving parts. The downside is that they tend to be even louder than their mechanical counterparts, making them pretty anti-social peripherals if your PC's in ear-shot of other people.

The Vulcan Pro TKL, however, is one of the quieter optical keyboards I've tested in a while. It still makes a sizable CLACK with every keystroke, but there's a softness to the sound that prevents it from feeling too grating. That's not to say the keys themselves are soft. Oh no. These keys are sharp, precise and feel beautiful to type with, and their responsive, linear movements are brilliant for work and play alike.

The Roccat Vulcan Pro TKL is a gorgeous optical gaming keyboard with superb build quality, fast and precise keys and buckets of customisable features. It's expensive, but this premium gaming keyboard really puts its money where its mouth is.

I must admit, it took a little bit of time to get used to full-height keys again, as my regular keyboard, the Logitech G815 Lightsync (the wired version of the brilliant Logitech G915 Lightspeed) has much lower-profile keys than other gaming keyboards I've tested in the past. Combined with the exposed, flathead design of the Roccat Vulcan Pro TKL's keys, this sometimes meant the tips of my fingers got caught on the edge of the keycaps, like they were tripping up over a wayward paving stone. It didn't take long for my fingers to become adjusted to them, though, and I was back up to my regular typing speed (and usual error level) in no time at all.

I'm a big fan of tenkeyless keyboards. As much as I love my Logitech G815 Lightsync, I very rarely end up using the number pad stuck on the end of it, and I like how much extra space there is on my desk now, too. There's not a lot of extra fat on the Vulcan Pro TKL, and its compact size, aluminium frame and rounded corners give it a very clean, smart profile. It's beautifully made, and its smaller size doesn't stop it from being practical, either.

For example, when you press down Caps Lock, the LEDs underneath turn white to let you know it's enabled. Ditto for its Game Mode feature, which locks the Windows key, on Pg Down. You can also add a secondary function to almost every key on the keyboard using Roccat's Swarm software, such as recordable macro commands, system shortcuts, and media keys (in case the default positions aren't to your liking). You can also program them to open applications and Windows folders, or use them to switch to one of the Vulcan Pro TKL's five available profiles. The only keys you can't program are the Fn button, right Ctrl, the arrow keys and the Del, End and Pg Down keys, as these already have specific Fn settings attached to them. Otherwise, you're free to customise the rest of the keyboard exactly to your liking.

In fact, I'd even go as far as saying I prefer its design to the original Vulcan - if only because of its clearly superior volume wheel. I love a good volume wheel, me, and the Vulcan Pro TKL's is just gorgeous. Despite being located quite close to its neighbouring keys, its tall shape makes it easy to grasp from the size and its tactile feedback make each twist and turn a delight.

Personally, I would have preferred its - and + signs to be the other way round, as twisting downwards / clockwise to increase the volume seems counterintuitive to turning it up, but at least they're both clearly labelled to tell you what's what. It's also accompanied by an equally tactile mute button, whose wonderfully clicky sound means you can always be sure you've pressed it correctly if you need to suddenly cut the volume. 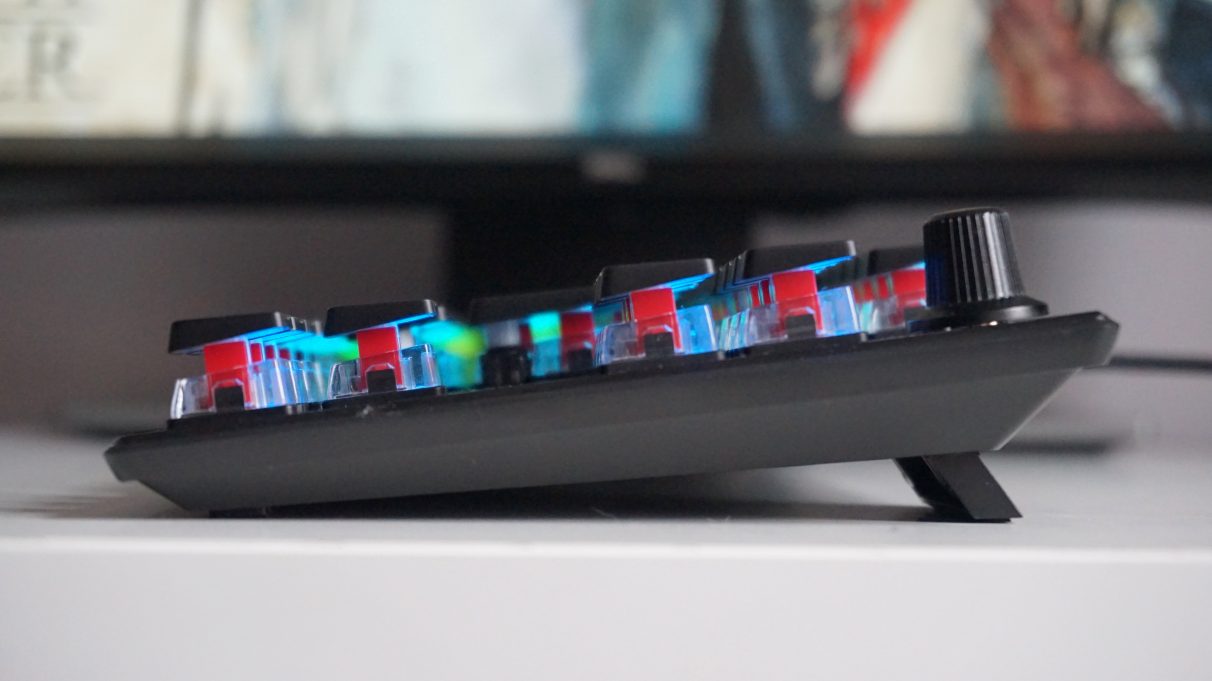 The only real stumbling block is its high price. Optical gaming keyboards are often more expensive than their mechanical counterparts due to the nature of their fancier switches, but at £150 / $160, the Vulcan Pro TKL is still quite a lot more than some of its compact rivals. My current top tenkeyless mechanical keyboard recommendation, the Fnatic miniStreak, for example, can be had for £80 / $95 these days. The Fnatic doesn't have the Vulcan's volume wheel or extensive customisation options, admittedly, but if all you want is a top notch compact keyboard and aren't that fussed about extra features, the Fnatic miniStreak is definitely the way to go.

However, if you value your keyboard's build quality, want the fastest switches around and appreciate the tactile twists and turns of exquisitely designed volume wheels, the Vulcan Pro TKL has a lot to recommend it.