Rocket League feels less like a game that was designed and more like something that was discovered. Like car football had always existed, floating around in the ether as a conceptual form that humans just get, and that developers Psyonix was simply the first to capture it in digital amber.

It’s that perfection of form that made Rocket League such a joy to play on its release in 2015. But it’s also that that initial perfection that makes the game difficult to mechanically improve with patches and updates. It’s car football — what else do you need to add?

Hats, as always, are the answer. Psyonix have spent the last two years jamming Rocket League with cosmetic items, and in addition to hats, you’ll get smoke trails, fancy explosions, new paint schemes, cars that tie into movie releases, special skull tyres, and even little balloon animals that sit on the tip of your vehicle’s aerial and bounce around pleasantly when you drive fast. They're all earned by playing the game, by pulling them out of crates with real-money keys, or by buying them directly from the in-game marketplace.

The vast number of these cosmetic items and the happy regularity with which they drop mean that even brand new players can cook up a car that looks appreciably different to their team-mates’ vehicles after a few matches. That process starts with the chassis, and Rocket League hands over a reasonable selection of frames, running from sleek looking drop-top rollerskate sports cars to fancified vans. If you’re willing to spend actual money, a wider selection of cars can be bought from the Showroom, where two dollars will get you a sci-fi podmobile, a coffin car, or a Nissan Skyline straight from the modern cinema classic 2 Fast 2 Furious. 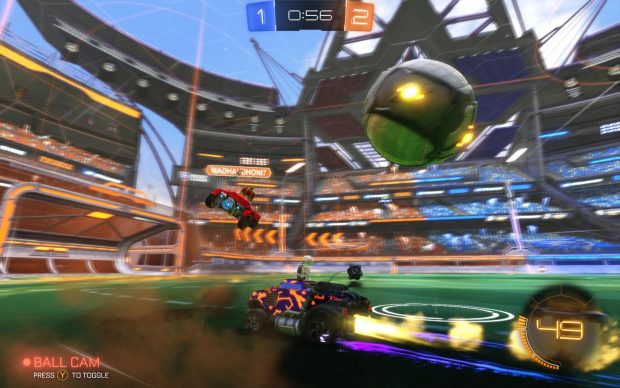 Personally, I like to build around the bigger, boxier bodies, but there’s no functional difference between them — all of Rocket League’s cars go at the same speed and have the same capabilities, no matter how much money you’ve spent buying Batmobiles and bouncy antennae. This has ensured that the playing field has remained level in the two years since Rocket League’s launch, and means that a team of first timers can still put goals past seasoned veterans, assuming the ball bounces the right way for them.

I mean, theoretically they can. I certainly can’t, because unlike half of my opponents, I can’t launch myself into the air, travel the length of the map, and stop the ball from going over the line with an audacious bicycle kick backflip at will. As Alec noted earlier this year, the game itself hasn't evolved beyond the understanding of occasional players; but people have got good at Rocket League in the years since its launch, and they’ll perform ludicrous stunts like that in both its casual and competitive playlists.

Fortunately, scrubs like us do have some recourse: Rocket League has a training mode that has been stuffed with an extensive database of player-created sessions. These help teach everything from basic blocking to fine air control, setting up the ball in difficult situations and allowing you to build up the muscle memory to nail an aerial clearance or wall juggle without the pressure of the game going on around you. Most of these training rooms skew towards top players, offering difficult challenges for people who already have the basics down, but Psyonix’s own practice spaces are also useful to pick up some advanced moves. 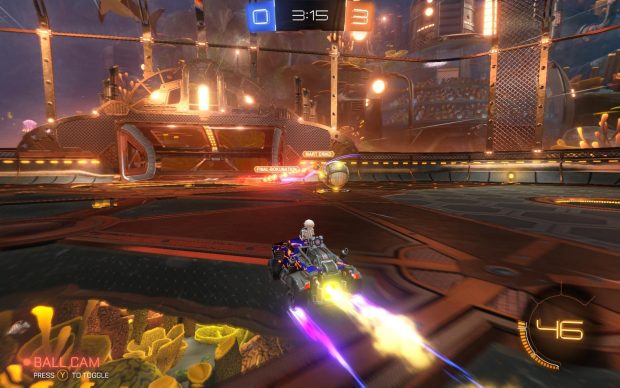 It was in these spaces that I finally started to get a handle on the fine air control that Rocket League’s best players have already mastered. Expect to be playing against these people if you dip into the game’s competitive playlist — especially if you get placed in the upper echelons of its ranking system, which runs on a StarCraft-style scale, from bronze to grand champion, via multiple tiers of silver, gold, platinum, and diamond ranking. Psyonix has also promised an in-built tournament system, which will let players organise their own elimination cups, but it hasn’t arrived yet (a beta is slated to launch by the end of this year).

That hasn’t stopped Rocket League’s players from organising their own tournaments, turning the game into one of the more popular esports around today. Rocket League is a deeply silly game — it’s bouncy car football with hats — but Psyonix are serious about its balance. They call it a digital sport, and in addition to adding cosmetic and training features, have cut elements introduced in earlier updates in order to keep the game feeling sharp. That’s what happened to the game’s irregularly shaped maps, which were removed from rotation in its competitive and casual modes in August of this year after players expressed their preference for the standard maps.

Now the majority of Rocket League’s action takes place on the original rectangular pitch. That’s not a slight against the game at all: just as real football has worked just fine on the same grassy map for the past century, Rocket League’s pitch has space for endless tactical variation and boundless creativity. Those pitches look nice, too. The latest of Rocket League’s maps — Farmstead — has amber waves of grain and dappled autumn light, but my favourite is the cyberpunky Neo Tokyo, which is lit by neon lights and bedecked with kanji signage. Halloween has altered these maps further, the occasion serving the theme for Rocket League’s first timed event. 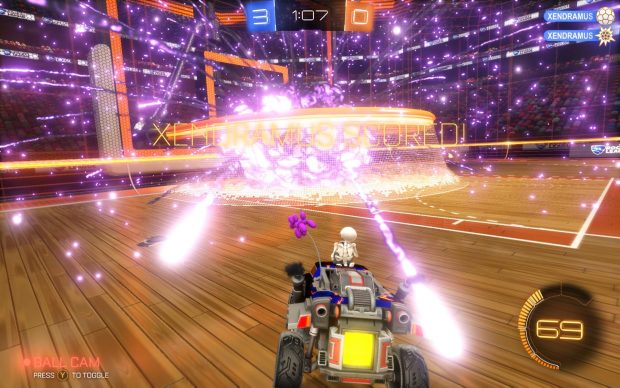 If you get sick of car football, Rocket League still has a smattering of alternate modes, including Hoops (car basketball), Snow Day (car ice hockey), Rumble (car deathmatch), and Dropshot (car… smash… floor… ball?). Dropshot is interesting, tasking players with whacking the ball into floor panels that then drop away, but it lacks the purity of original Rocket League-ing. Of these ancillary modes, I had the easiest time getting a game of Hoops going: at the time of writing, the other modes have much smaller player counts, forcing me to wait multiple minutes at a time in the matchmaking screen.

Fortunately, it’s still pretty easy to find a regular Rocket League match, thanks to a player base that’s still heavily engaged even two years down the line. That engagement has a downside, too — opponents who have lived and breathed tiny car football since 2015 and will happily tonk you 11-0 — but the training and tier systems mean that new and returning players have the tools and time to get better on their own. Psyonix hit a home run with Rocket League (little football joke, there), and almost everything they have added since serves to make an experience that already felt innate run even smoother.