Roguelikes and roguelikelikes are not my thing. I get bored, I get frustrated, I absolutely hate the idea of starting all over again when I've finally had a good run and it goes sour, I hate Spelunky's bats, I hate FTL's fights and I would happily push Don't Starve's bees into a volcano. However, after making a video of the game last week, I have spent 15 entirely voluntary hours of my weekend in Rogue Islands [official site], a roguelikelike where you roam across a set of Minecrafty-looking procedural island levels deactivating demon portals and walloping hell bats. Here's why:

… but first some blather to explain what the game actually is. As per the official game info: "Developed by two of the world's top FPS specialists, Kiaran Ritchie (Bioware) and Jane Whittaker (developer of the multi million selling Alien Vs Predator and Goldeneye N64 iconic FPS games), Rogue Islands takes the first person shooter to a whole new level of action!"

What that translates to is a story about a gnome wizard called Motwort who hops and blasts his way around islands. There are objectives on each which are generally about finding a location and then climbing to the top of a thing and interacting with whatever's at the top. Inhabiting the islands are various types of enemy and hazard as well as collectible resources. There's a story underpinning this activity - something about spirit trees???? - but I'll admit that that's the part I didn't engage with at all. I'm fine with Motwort as a lore-less avatar. 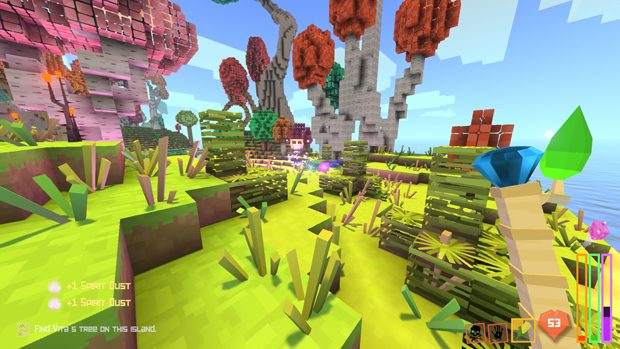 I started playing the game on the easiest mode. It's called "explorer" and you take less damage and can craft nightmares easily. Nightmares are bonus respawns which you can make using one of the resources on the islands, and you can store two of them at a time in explorer mode. That means you still need to remember to replenish them to avoid permadeath but you can build in a buffer of respawns to help you out and guard against lost progress.

In the early levels you're in the Florid Vale biomes which are these chunky land masses, kind of like basic forest biomes. The procedural generation adds caves and bays and hills to explore and the whole thing is infested with skeletons which you can take on by strafing while shooting your magical peashooter. Explorer mode meant I had enough leeway to do a lot of learning in each playthrough, even before I figured out how to craft my own nightmares. I fumbled shots against skeletons, strafed into poisonous bushes and ended up on the far side of the island away from my boat at nighttime when ghasts descend and try to suck out your life force in the manner of some kind of Harry Potter dementor.

I think in most roguelikes and roguelikelikes you'd get killed by that stuff and dumped back at the start which is a big part of what I find dispiriting. Rogue Islands gave me more space to learn and to try things out without having to repeat myself in a way I don't find rewarding. 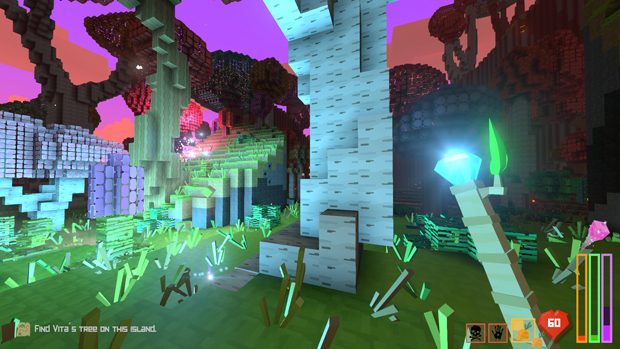 I also liked being on the islands and mapping out the space in my head. Sometimes I'd head straight for the objective, but more often I'd enjoy pottering about, clearing areas of enemies and shooting my mana blasts at walls to mine out gem shards and blocks to boost my mana for a whole day cycle before heading back to the boat and hiding til morning for more resource gathering.

I find that sense of clearing an area until I feel like I've had my fill really satisfying. The game kind of rewards that in the sense that you get a score sheet when you leave an island to tell you how many diamond shards of the total you managed to pick up or how many enemies you left un-walloped, but it only gives you that info after you've decided to leave so it's not the same nagging sense of completionism I get when I'm actively trying to 100% a task and the game is showing me there's one single thing left to find. 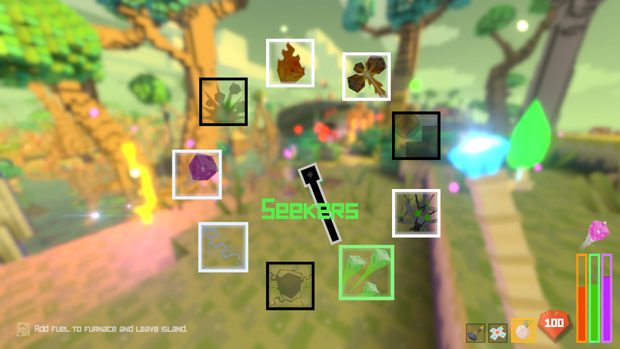 You start off with the aforementioned magical peashooter which allows you to pick at enemies from afar. I spent a long time not deviating from that because I always have this background concern that spells or weapons are about to become massively overcomplicated. I love a straightforward shooty option so I just upgraded the peashooter a bunch and enjoyed pinging things from afar.

Then I put some emeralds into the earth magic slots. I admit I then ignored that slot for ages, but eventually I remembered it existed and suddenly there was a) an uptick in the damage I was inflicting with each hit and b) these things are homing missiles! That was rather satisfying and also made wandering round the worlds a bit easier. After all, I didn't have to rely on pinpoint accuracy, I could just aim in a vague direction. A second spell let me summon a cloud of wasps that would harass other creatures on my behalf, augmenting my damage further. 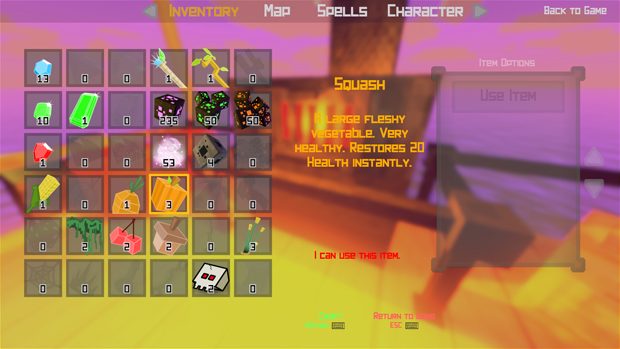 Fire power came a lot later as the associated rubies are the scarcer resource, especially early on, but that was another massive shift. It's a sort of autotargetted fire stream which roasts enemies, absolutely obliterating their healthbars. I felt a bit overpowered with that until I realised how easy it was to set my surroundings and myself on fire.

These are relatively simple systems, and I expect some people will find them unsatisfying or easy to master, but they really suit how I want to play in this game, with fighting being a thing I need to do but not something that's a real slog, more that it's an activity and could kill you if you get too complacent.

I also just really like being in the worlds. The Florid Vale is this pastoral idyll (plus killer skeletons and demon skulls), but it's chill, it's pretty and you get large land masses to navigate meaning less danger from the gnome-eating fish which live in the water. Later in the game you get desert worlds with sheer drops and mangroves with twisted roots that are easy to fall off and thus strafing is no longer your best friend. 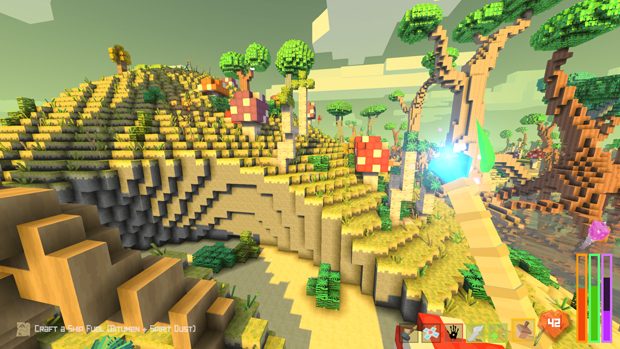 Houses you find in the levels sometimes contain treasures as well as gem shards and the like. I got something to boost my strength last playthrough and an amulet which gave me poison resistance. The poison resistance was possibly a little overpowered as it let me be more careless with some enemies and hazards but, as with most things, I quite liked that here because it was another thing which gave me more space to learn in a single playthrough. That said it did feel far too easy to defeat the final boss when I reached that.

I'm not sure that's a bad thing because it meant I instantly started a new save on the next difficulty up. It isn't the hardest difficulty as you still have the nightmare buffer craft system to avoid permadeath but you're only allowed to carry one with you so you can come a cropper more easily. I've noticed that my resources are a little scarcer so I'm needing to make choices about where I send my reserves of spirit dust instead of just upgrading everything. I'm also having a more meaningful relationship with the food items in the game. Some give you a bit of health back, others refill your mana, one makes you invisible to ghasts, another means you take no fall damage... In explorer mode that didn't matter but in this medium difficulty it has started to. 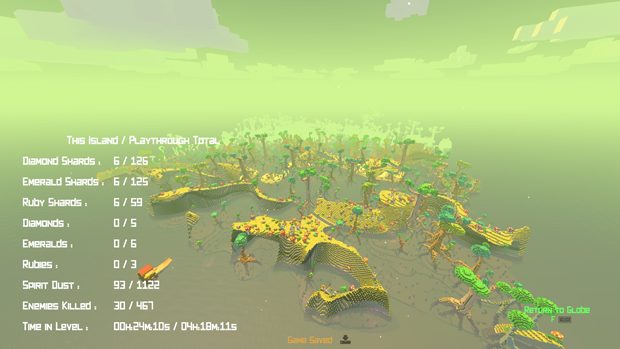 I'm wondering whether I'll ever make it to the real permadeath mode – the one with no buffers. I'd like to and that's a new feeling. I think the furthest I got with roguelikes and roguelikelikes before was enjoying the energy and joy of Crypt of the Necrodancer and thus being drawn back to it for the experience rather than ever getting any further into the game itself. This one is pottering and scenery as well as some cute monsters and the space to learn stuff in an environment I prefer, or in larger chunks than those games tend to allow per playthrough. I also take a LOT of screenshots when I'm wandering about.

Rogue Islands won't be for everyone, but I thought it would be useful to explain why it's for me!

Rogue Islands is out now for Windows, and is available via Steam for £14.99.