If you click on a link and make a purchase we may receive a small commission. Read our editorial policy.
Romancing The Code is a regular series where Alice Bee writes about the different ways games make us fall in love, without the actual sex bit.

Purrfect Date describes itself as “a cross between a Visual Novel, a Dating Sim, and a dark British Comedy”. If I was given that as an elevator pitch for a game with no context, I would have assumed that it was about the cast of Monty Python trying to snog Gundam suits. Purrfect Date does have the kind of humour where characters suffer from cat-themed nominative determinism, like poor old Professor Pawpur. You can use that as a yardstick to measure how much you'd like it. It is about scientists dating cats.

Probably the most famous person dating animals 'em up is Hatoful Boyfriend, which is excellent and you should definitely play it. In that you play the only human student at a school for pigeons; though you see them in their bird form most of the time, the first time you meet they have cute illustrations of what they'd look like if they were real boys. This helps to smooths over the fact that you’re a human dating small birds. Purrfect Date doesn’t do that. In one of the ultimate ‘looks don’t actually matter’ moral lessons, it goes “Lol, this is a cat, you are dating cats.” (Spoilers for the cat dating game follow). 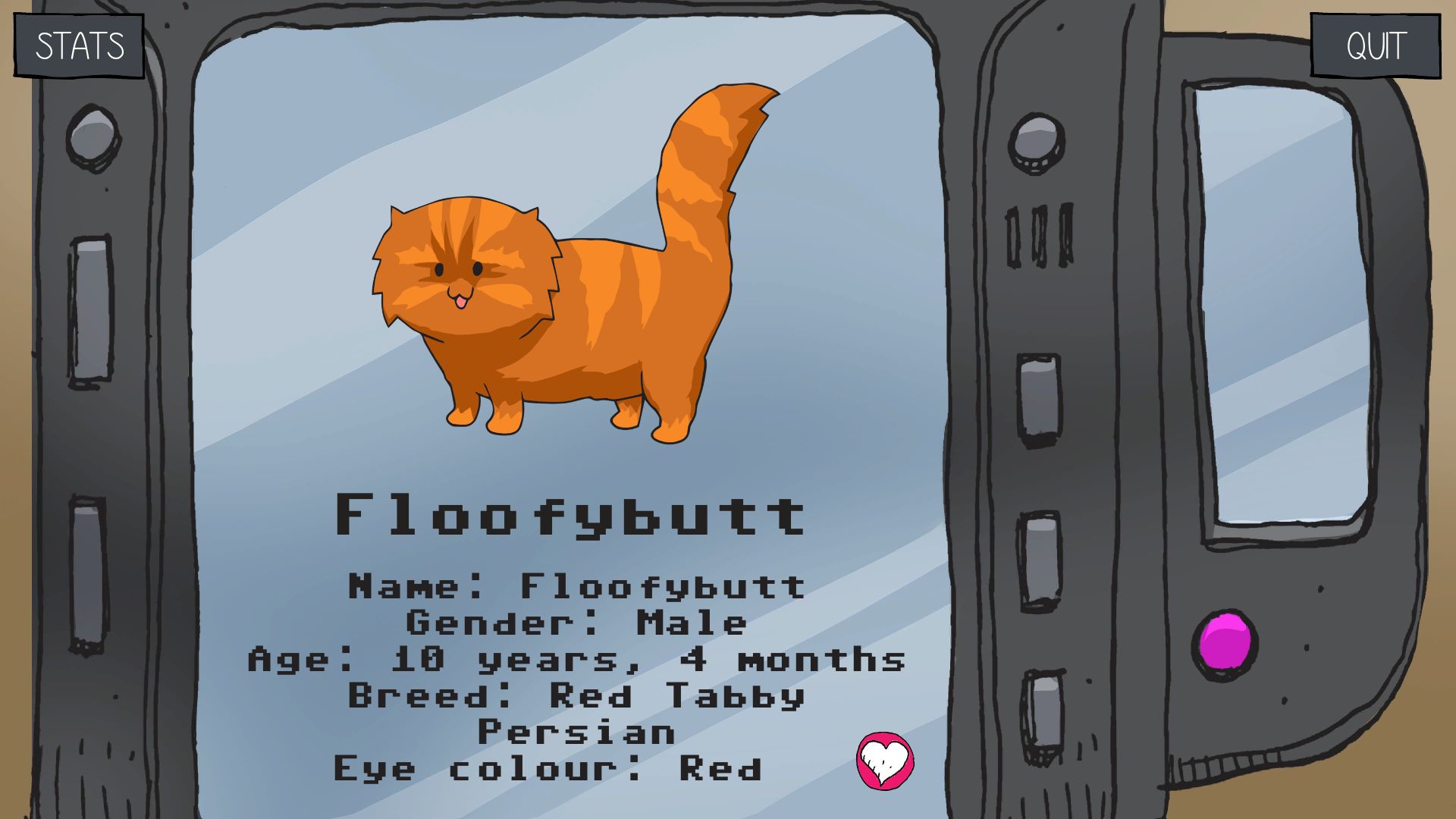 It doesn’t judge you for this, obviously, because it would be undermining the whole premise of the game. But neither does it disguise that you are flirting with actual cats. They have cat names like Floofybutt and Trixie. You are a human, sent to study the cats living on this weird, remote cat island, and they, it bears repeating, are cats. The background plot to the cat bothering is that the island has curious healing properties, as well as a strange tribe of feral ‘Elder Cats’, and the research group you’re working for has nefarious ulterior motives. Dating the cats starts out as ‘getting to know them better, one on one’ so they’ll help you. Yeah, sure. It was that all along, y’r honour.

The dates you go on with the cats are weird. They’re an odd mix of feline and human behaviour. You might be reading manga with Kibbles the nerd cat, or sitting on the muddy forest floor, in the middle of the night, drinking bootlegged booze with McMurphy (Murph’s main character trait is being Irish, to be sure). With each successful date you have, the pretty kitty will take you to their most favourite places on the island, and open up about their secret inner lives.

As in Hatoful Boyfriend, and presumably for the same reason, you don’t actually get off with the objects of your affection. This is a very good thing. Imagine trying to neck a cat. They don’t have lips and their noses are always wet. Eurgh. Plus, the process cats have to go through when they actually mate is harrowing to consider. A tom cat has a hundred tiny barbs, like fish hooks, on his penis, so we should perhaps be more sympathetic when cats are screaming at each other in the street. It is very important that the relationships in the game are not physical, because that would be weird, and an entirely different article. No one wants to think about shagging a cat, which is why you definitely shouldn't be right now, so I hope you're not. The player does not want to confront the fact that they might be a filthy feline perv. And yet the game forces you to confront it all the time, but in a nice way instead of a grim, illegal one. 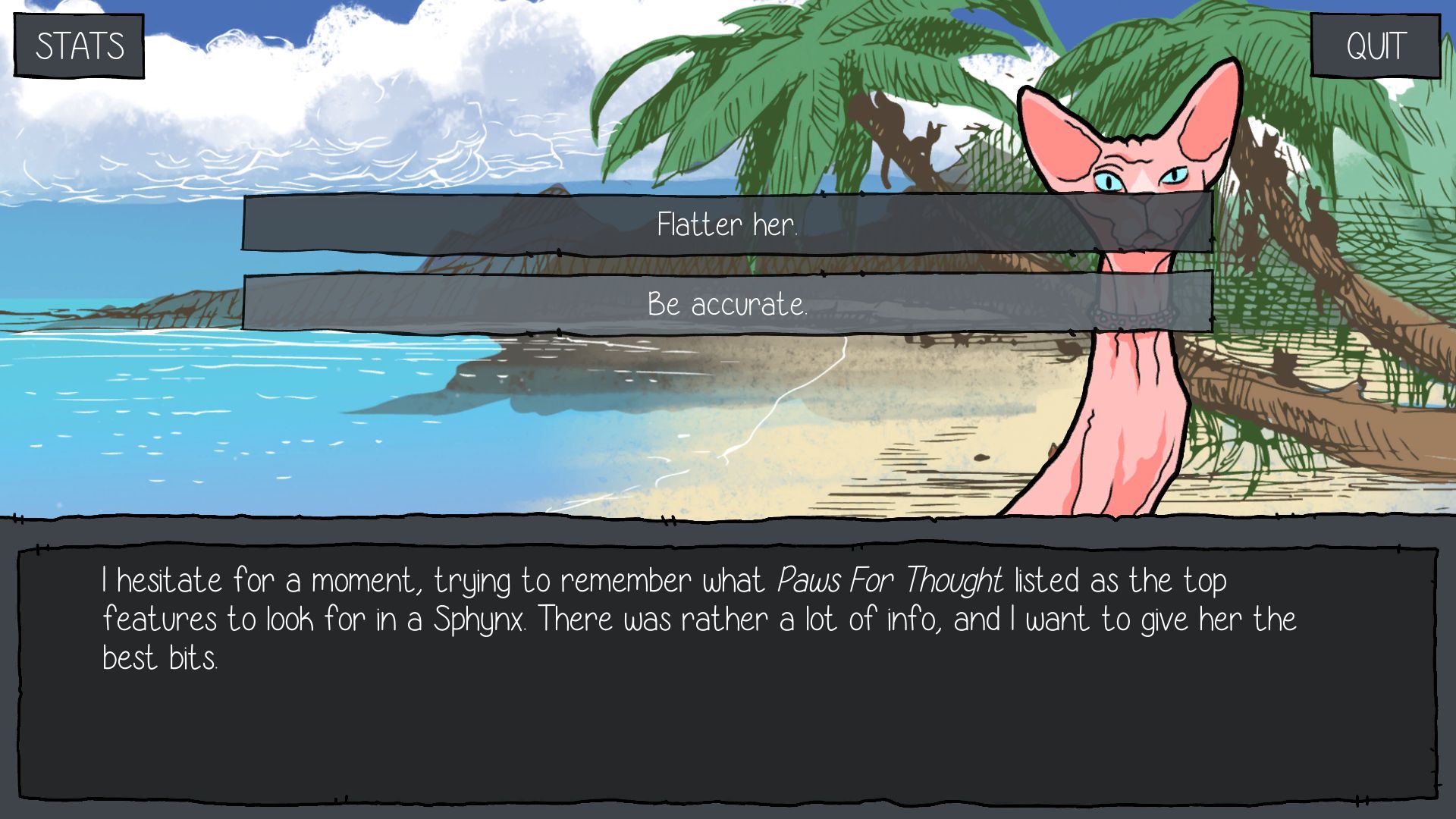 Because there is a twist! Aha! You actually play six characters. Each of them is, in turn, metamorphosed into a cat themselves, and must be replaced with another research assistant, who couples up with another one of the other cats, and so on. The inevitable conclusion you come to is that all the cats used to be human once, too. You do eventually get to see them in their human form, if you get the true ending, but to do that you have to couple off with each of the cats, and go on dates that reference their paws and claws and fat little tum tums. You! Love! A! Cat!

If you’re used to romances in games, you’re usually taught to agree with whatever the object of your affections says or does. Insert flattery coin, receive love. If you follow this instinct in Purrfect Date, though, you will often crash and burn. Trixie is into mysticism, but prefers that you admit you’re sceptical rather than lie and say you can totally feel the magic energy too. Floofybutt goes on a small rant about the Elder Cats and knowing one’s enemy, and if you say you agree with him even though you don’t, he will know. And he loses respect for you. And he will ditch you to go off on a date with someone else. It feels a bit like every time you were ditched in real life, but worse in a way, because this time even a kind of right wing fictional cat doesn’t want you. 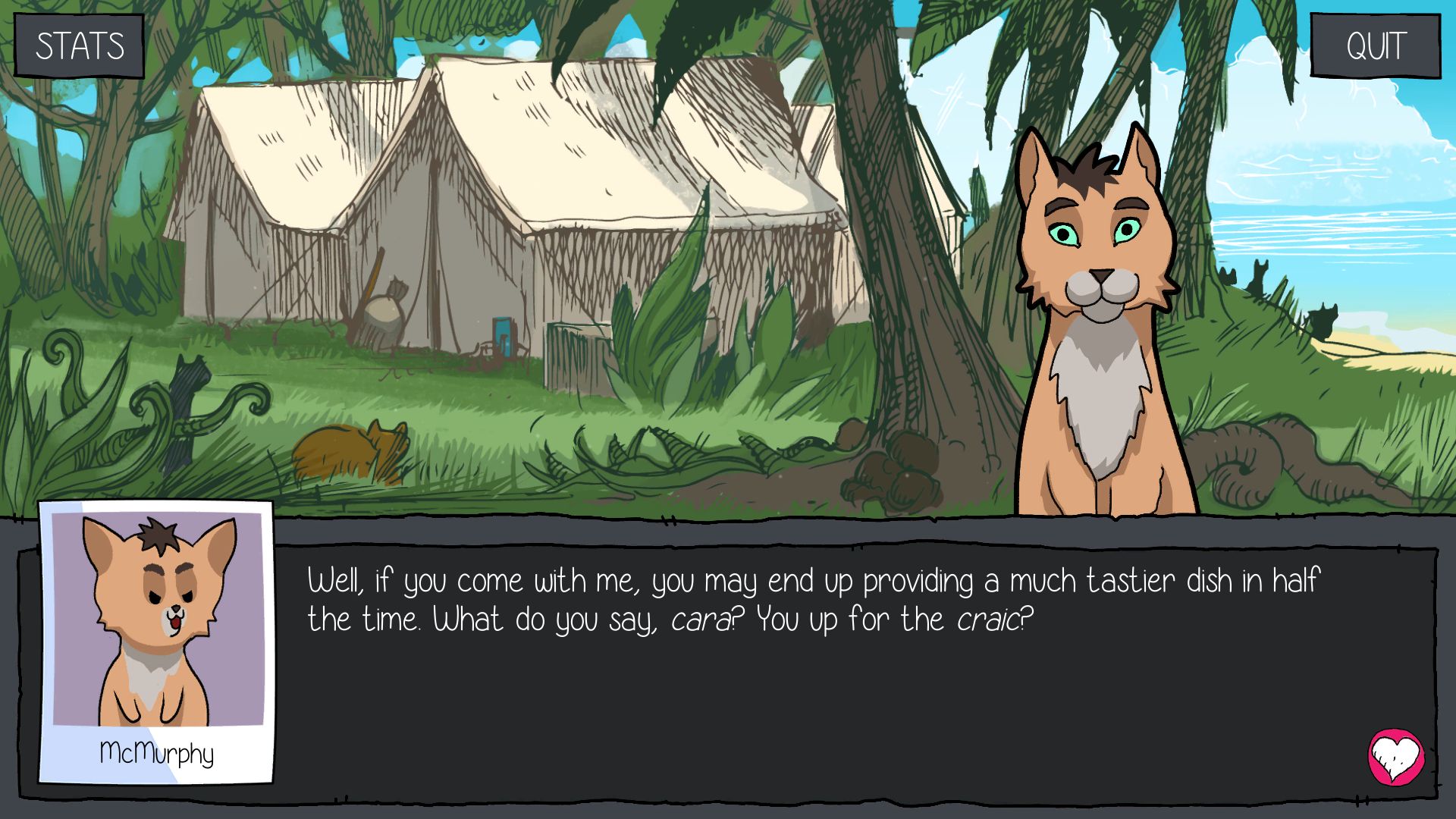 But, this doesn’t work all the time! McMurphy doesn’t want you to intervene and take the booze away, he wants to get fucked up and talk about David Bowie; Snooty Booty doesn’t want you to be scientifically honest about what Sphynx cats are supposed to look like, she wants you to flatter her. The only way to ‘win’ the game is by paying attention to who the cats actually are as, er, people. This may involve making peace with the fact that it’s probably a different person to who you are.

In the true ending, everyone takes an antidote to turn back into humans. Sometimes the player character says the human version of their beau looks exactly how they expected them to. Sometimes not. But they’re never upset, because they were already in love when the person was a cat. Everyone having opposable thumbs is just a sweet bonus.

Hatoful Boyfriend gives its bird bois sexy avatars up front because it knows on one level, looks do matter to people. But Purrfect Date does it the other way around because it knows on another, they really don’t. At the end of the day, none of us have fish hooks in our genitals, so we should all just be grateful for that.