If you click on a link and make a purchase we may receive a small commission. Read our editorial policy.
Romancing The Code is a regular series where Alice Bee writes about the different ways games make us fall in love, without the actual sex bit.

One of the things I find endlessly fascinating about us, people, is the way we form emotional attachments to things that aren’t, y’know, things. Paint a face on a mug and good god, you’d better not break that mug. People marry walls and have sex with cars. They get all tingly over books. And they feel real feelings about fake people in video games.

So when I say I really like video game romances, it’s true -- but it’s the romance bit, not the sex scenes where the polygons awkwardly rub up against one another. How do developers make us care enough about a character to want to watch a terrible sex scene with a fade to black? To the extent that we keep caring about them after we turn off the computer? It’s interesting to frame this question around Heaven Will Be Mine, because that game talks about ways of caring and feeling and loving that are deliberately unknowable. 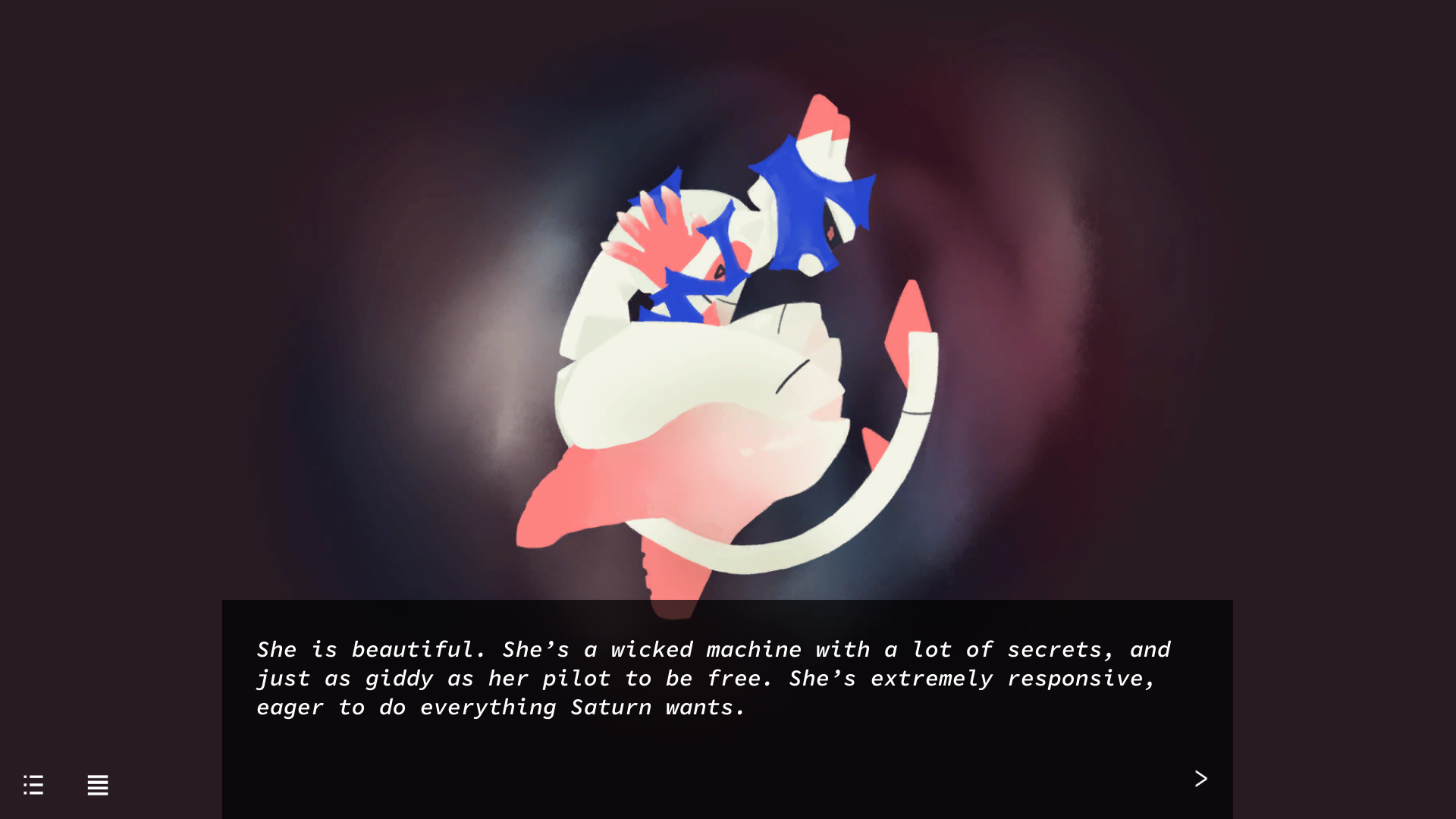 Heaven Will Be Mine is a visual novel, a piece of interactive fiction where you play as one of three mech pilots fighting the last days of a pointless war in space. Saturn, Luna-Terra and Pluto are the ace fighters of each of their respective factions in an alternate version of the '80s. The cold war was fought against the Existential Threat, a half-real enemy that turned out to only be a shadow of humanity -- the future echoes, bouncing back in time. I think. Maybe. The war is over, and the people that fought it, in space, don’t know what to do. These three women fly through nebulas in ship-selves, giant humanoid mechs that allow the pilot to feel what the ship-self feels (sorta like Pacific Rim but… more) and try to figure out the next step.

There are other ways that the universe of Heaven Will Be Mine is different, though. It seems that here Culture has a capital C. It’s a force of physics tied up with gravity. Earth has gravity because humans live there, and the women who were made to grow up in space are different because they grew up away from it. They are different on a fundamental level. Heaven Will Be Mine is transhumanist in a truer way than, e.g. a lazy cyberpunk ‘are you still human if you have a cybernetic arm??’ take. These pilots are the aliens now. Fortunately they still know they like kissing other girls. We can think of them as ‘othered’ by humanity in more ways than one, of course. It’s very explicitly a story for and about LGBTQ women. 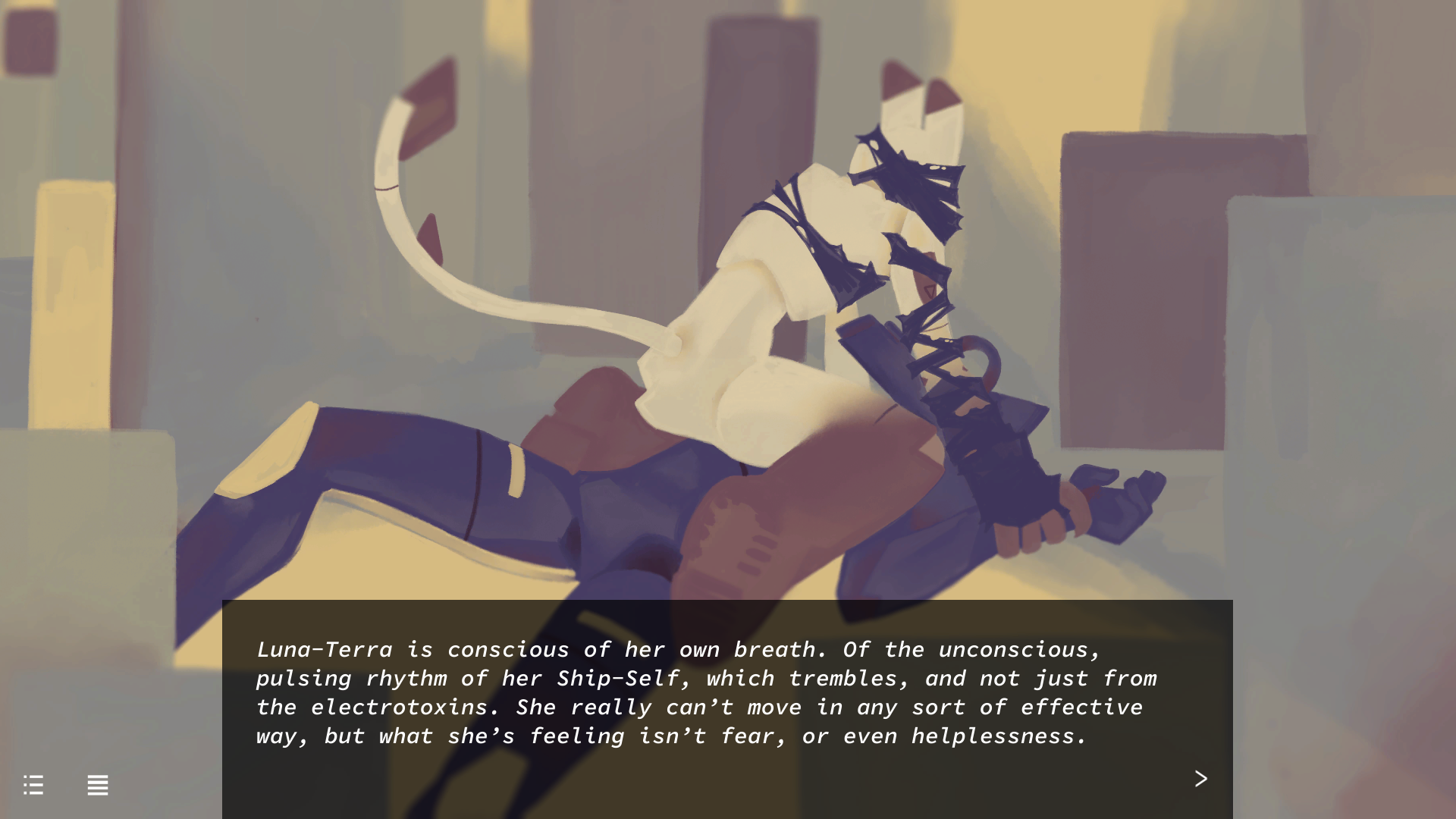 Each of the voices in Heaven Will Be Mine is extraordinarily well drawn. If you removed the names, you could still tell the individuals apart: this one confident, playful, hopeful; that one tired and a little cynical; and here, a loveable, annoying risk taker. In many ways their identity is tied up with their faction -- Luna-Terra, the oldest, is part of the faction that wants to return to Earth, and her ship-self is the least future tech of the three, operated manually -- though they are each struggling against what their faction wants, and which action to take to still be happy in the end.

There’s a tension between how the women experience things as their ship selves vs their first bodies. To be intimate in the way that humans normally are they need to open the cockpit of their ship-self, which makes a kiss feel all the more intimate because of the trust involved. But the ship-selves seem somehow more intimate. The writing becomes almost poetic, soaked through and through with magic and science fizzing in equal amounts. Two ships touching is described as “like making out with a battery” and they buffet each other with waves of gravity in oceans of space. As you play, the soundtrack clicks and crackles and soars like a finger down the spine. But the intimacy isn't about sex. That isn't the point, I don't think. 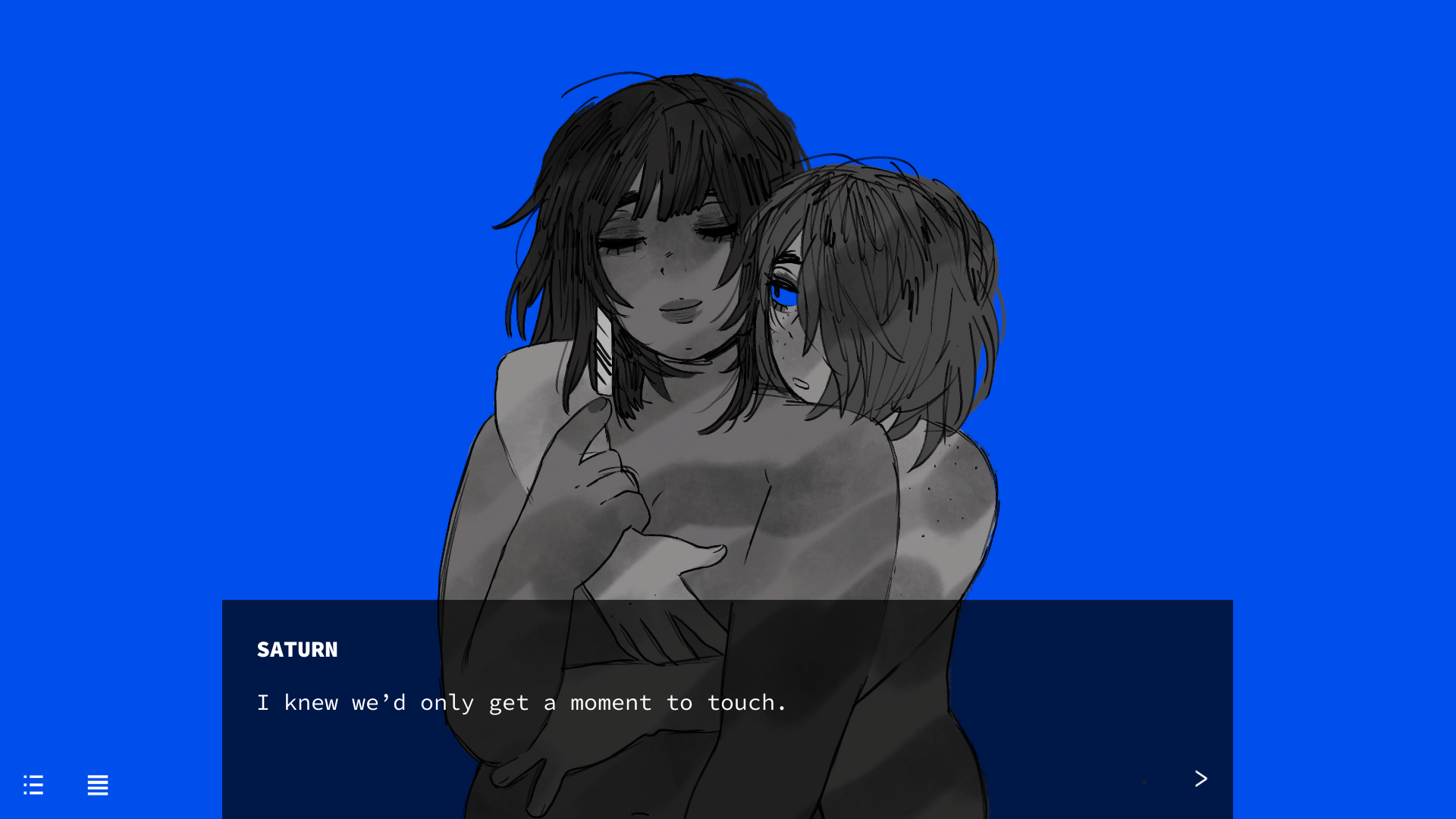 Because each of the women have such a strong sense of who they are (if not exactly what), you get the feeling that you’re watching someone else’s story play out, even though Heaven Will Be Mine let’s you read Saturn’s emails and messages as if you were here, and even though games usually make you feel like you are the main character. This is exacerbated by the fact that though Heaven Will Be Mine has multiple endings depending on which faction is the most powerful, each of them involves the three women ending up with and supporting one another, because the only ones who can understand them are… them. They alone, they three, unique in all the universe. How could you not love someone if you were they only ones who were you?

Saturn is my favourite. Saturn is the youngest, the most openly flirtatious, given to innuendo, and sends messages exclusively in lowercase, with incorrect punctuation. She feels, for lack of a better term, the most millennial, almost nihilistic. She tests the others, even as she loves them. She and Pluto can communicate via the story narration, like feeling each other’s thoughts. Luna-Terra teaches her to evade a drone by thinking of a secret. 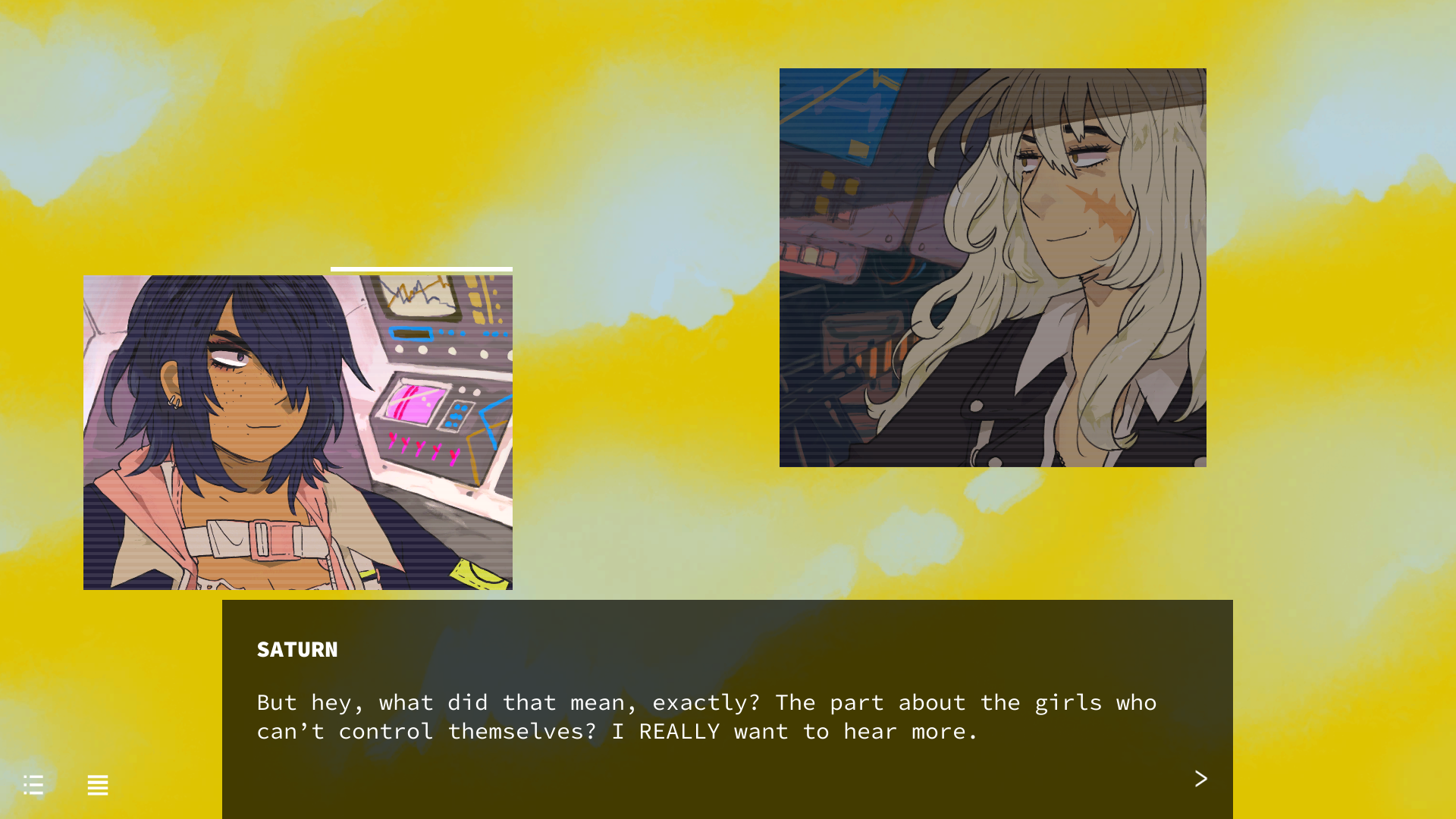 Saturn’s ending is my favourite too. Luna-Terra’s group wants to return to Earth, and Pluto’s wants to bring Earth to space, but Saturn’s wants to stay. And if you get that ending, they do get to stay -- but on their own terms. They become something else entirely. They love each other in ways we could never comprehend. Maybe, the game says, they touch through each other. “Lazy sex in a morning bed, except the bed is curvature of space-time and sex is something so obscene it would make your mind implode to consider it.”

Heaven Will Be Mine shows us imperfect women who are nevertheless worthy of total trust from the others. They become something more; they have a bond that we can’t have and yet, maybe, could? Its romance is so successful precisely because I cannot be a part of it. I just wish I could. 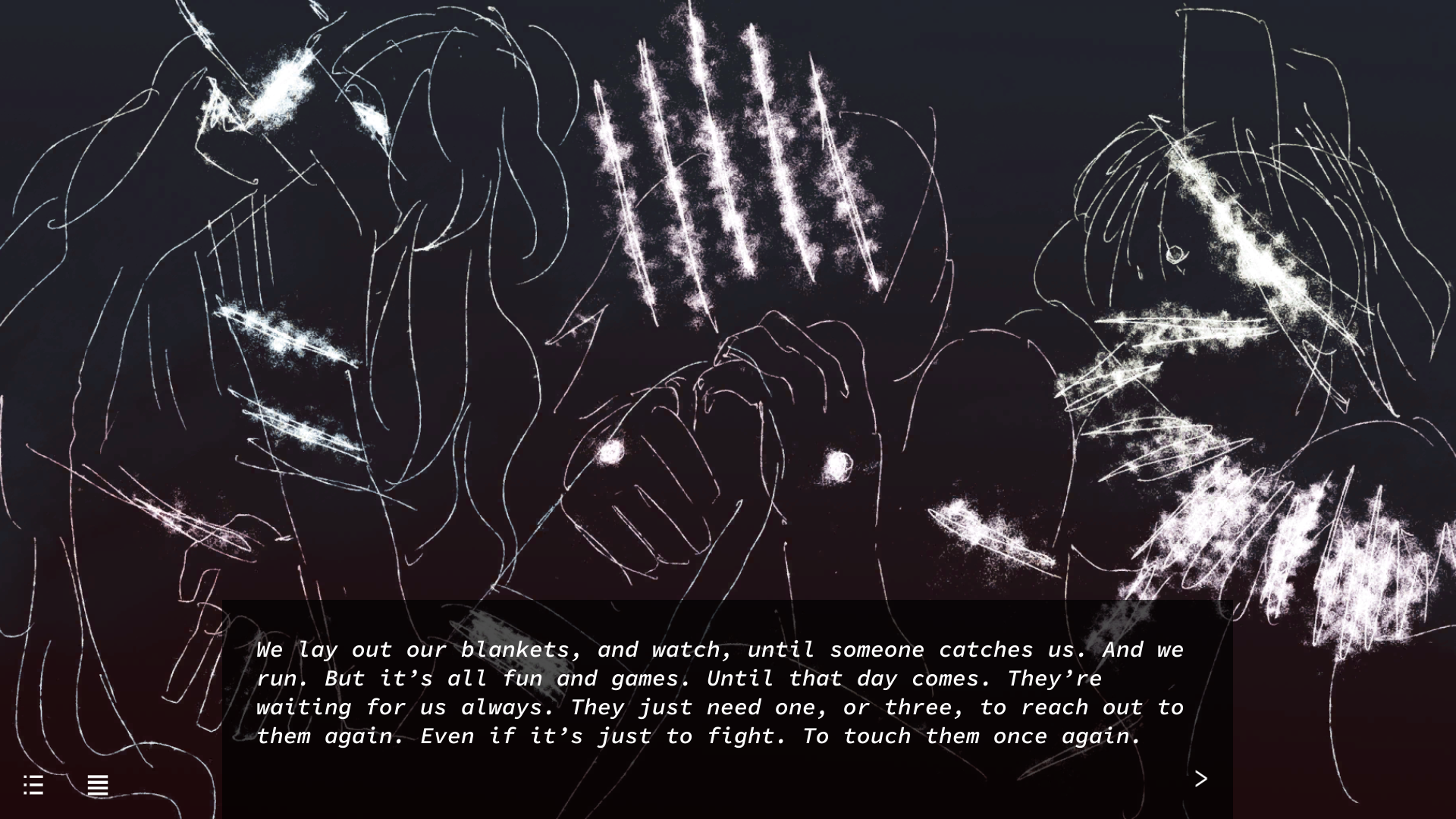