I have a fairly sketchy history of what, for want of a proper genre name, we'll call Alien Breed-like games. They're top-down or isometric shooters in which you contend with onslaughts of skittery or lumbery alien enemies, while hoovering up weapons and ammo and dashing about opening doors. They peaked, I think it's fair to say, with Frozenbyte's Shadowgrounds and Shadowgrounds: Survivor, and Valve's freebie Alien Swarm in 2010 gave us the best co-op incarnation of the form. But despite being able to pluck out examples from various years (not least Sigma Team's series of Alien Shooter and Zombie Shooter series spanning a decade of releases) it still seems a very under-served format, not least in terms of experimentation and evolution.

Solstice Chronicles: MIA [official site] arrives to offer an attempt at the former, but unfortunately doesn't much succeed at the latter. 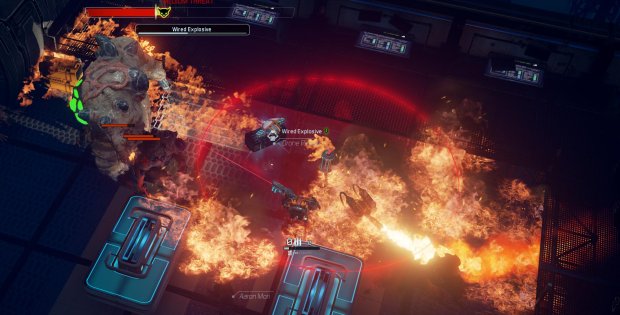 This is, in fact, a sequel of some sort. But then you'd forgotten about The Red Solstice, just as I had. That one was based on Warcraft 3's Night Of The Dead mods, its RTS focus on co-op, and successfully Kickstartered, Early Accessed, and released to little attention. With the same setting of a bunch of Earthlings trying to make a home on a very hostile Mars, this time tactics are pushed backward to let the twin-stick action of an Alien Breed-like take centre stage. And when it's just getting on with being a very busy, very noisy action game, it fulfils the brief. Gore and viscera splatter the screen as you mow down legions of enemy fodder, struggling to survive the horde as you frantically deploy special attacks or run for cover.

Sadly, it's all let down from the opening moment by the fact that it feels like an early alpha build rather than a finished game. So many elements feel like they've not been properly implemented yet; the janky story clumsily crashing into levels, the game throwing up tutorial screens labeled "6/9" before the subjects of 2-5/9 have even been introduced, or the way a few levels in, presumably after what were intended to be tutorial stages, it suddenly introduces a weapon and skill select screen that wasn't there at the beginning of any of the previous episodes.

That mysteriously-arriving weapon select screen is related to your finding a special suit (appearing just before you find it!), which you just stumble upon with no build-up. It also adds in a skill tree with a pile of points to spend, but the explanation text for the skills does little to clear the mystery. "Adds a chance that fired bulle [sic] will be explosive with area of effect". "Increases cluster small grenades radius". "Players are safe inside the greed semicircle." Let alone that further tiers of the tree aren't marked as linked to others, with no visible clues what might cause what to become unlocked. And this is all further exacerbated by the game's having had you choose a character class at the very start without divulging what that might entail later on. Something made all the more confusing when those class characteristics your told about at the start don't kick in until you find the suit, nearly an hour into the game. I picked a Hellfire, a tank with a flamethrower permanently set as the second weapon, but got a generic grunt with any old weapons and no explanation, until the point when it suddenly changes. Very odd. 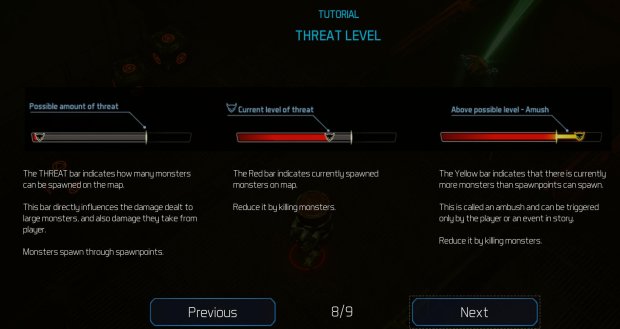 Up to this point, the game has tried to introduce what I imagine is intended to be its experimentation with the form: Threat levels. Inconsequentially announced mid one early level, tutorial screen 8/9 (the first to appear) pops up and attempts to explain what this is. Sadly this attempt contains passages like, "This bar directly influences the damage dealt to large monsters, and also damage they take from player." Uh-huh. (It's clearly translation issues, but as we have screamed since the dawn of international gaming, "GET A NATIVE SPEAKER OF EACH LANGUAGE TO GLANCE AT YOUR MOST IMPORTANT TEXT!") Understanding what the Threat bar is is integral to the game, and that it's introduced from out of nowhere, with a slapdash tutorial screen that fails to communicate it is pretty disastrous.

The point is, the larger the grey area on your bar, the more enemies can spawn, and the larger the red the more there currently are on screen. What it rather forgets to say at this point is that you can manipulate the threat levels using the skills it will introduce later, via the help of a floaty robot thing, who can - on the press of a button - dash off and pick up lots of extra bonus drops and pop them at your feet. The longer you let her (for she is called Saffron) do this, the more the threat levels in that area increase. Or she can block enemy attacks with a big circle of protection, which if left to overheat will, er, reduce threat levels. So, you are left to presume, managing the threat meter in any level is going to be a tactical extra to play? Maybe? But since all you're doing is blasting your way through baddies to complete tasks, it seems like how many there are of them should be the game's job to worry about, not yours. Other games balance this for you to create the most fun situations possible - here you have to balance it for yourself.

The very similar levels (it pretends it encourages exploration, but really this means going in the only other available direction) are flat and dull, but pleasingly lit with the torch. The problem is how everything just looks the same, with what initially appear to be interesting nooks to explore almost always blocked by invisible barriers, meaning you trudge from one end to the other without much sense of event. Were it really a case of exploring extra areas for special bonuses, this would be more interesting, but it's invariably just going in the opposite direction to the quest path indicator to see if there's some extra ammo. Sometimes there is.

However, despite all these complaints, once the game finds its groove it certainly does have that Alien Breed-like (seriously, we need to think of a genre name) excitement, never knowing if you're going to pull enough skills out of the bag to survive a wave, or stupidly get yourself pinned down in a corner with little hope. MIA certainly throws enough skill types and options at you to keep you busy, and there's definitely the satisfaction of surviving a battle that previously killed you. The catch being, each time you do you get more of the clunky not-quite-finished feel to deal with. Splash damage feels really poorly implemented, for instance, making clever attempts to draw busy mobs into exploding barrels pretty anticlimactic, while it's far too easy to just entirely lose your character in the mess of monsters on screen, so that you don't even know which direction to try to run in. There are enemy types that are waaaaay too over-powered too, especially a giant hulking creature that can spawn other bigger bads (by screaming, the poor thing), who has a vulnerability in his back - something slightly undermined by his balletic ability to rapidly spin on the spot.

The simple reality is, you might as well get Shadowgrounds. (And not Shadowlands, as I just typed - that is a very different sort of media experience.) For all the positives I've tried to find here, there's nothing that the game's formers don't do better, not least because the whole Threat thing never really comes together, never really makes sense nor feels like something you're properly in control of. If you're jonesing for a new game in the field, then this isn't a disaster by any means. If you put up with its clumsiness, there's a tough-as-nails isometric twin-stick action-me-do (that's the one!) here to play. Just one that doesn't really stand out from the crowd.