For a small, streamlined gaming mouse, the Speedlink Orios sure knows how to announce itself. Replete with RGBs around the side of the mouse, scroll wheel and rear logo, this rainbow infused clicker is almost as much a sight for the eyes as the holey Glorious Model O-. Indeed, with its slender frame and weight of 95g, the Speedlink Orios definitely leans more toward that Glorious school of ultralight gaming mouse than, say, Corsair's palm-hogging Glaive Pro RGB, but it does so without puncturing its chassis with a bunch of holes to really let those LEDs sing.

It's also quite a loud gaming mouse with a very distinct clicking sound, but its switches do at least feel firm and responsive in-game. It is worth considering over other small gaming mice, though? Here's wot I think.

Price-wise, the Speedlink Orios sits more towards the budget end of the spectrum than anywhere else - at least in the UK, where it currently costs around £35. In the US, its $50 price positions it as more of a mid-range contender, putting it up against the likes of the Roccat Kone Pure Owl-Eye - which is currently one of my next-best gaming mouse picks for small hands after the Model O-. 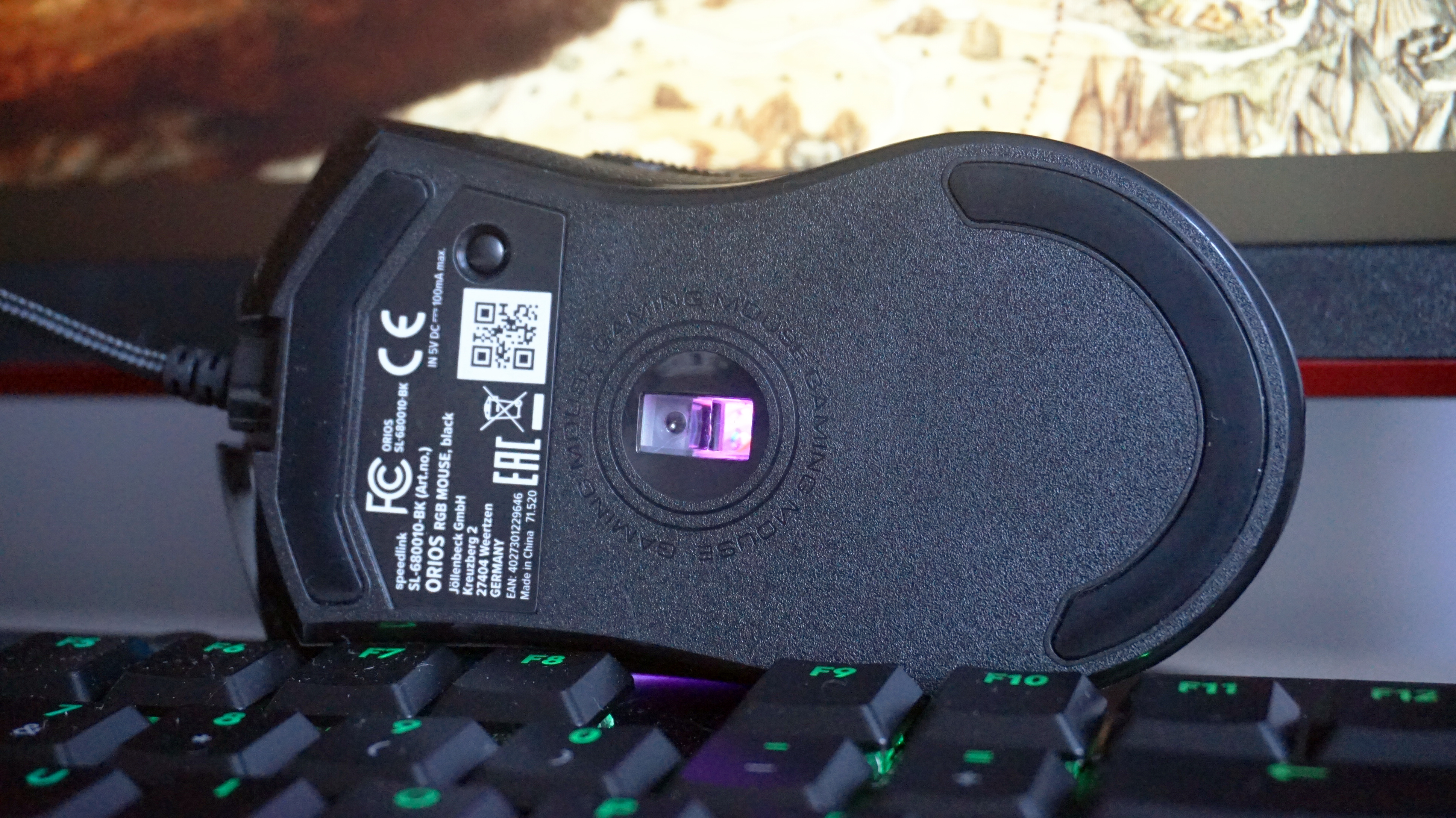 At 95g, the Orios is a fraction heavier than the 88g Roccat, but its slim, lightly sculpted frame does make it more comfortable to use on a day-to-day basis. With the Owl Eye, I was constantly butting up against its very pronounced thumb groove, but the Orios posed no such problem. Its two side buttons were also within easy reach of my thumb, and their opposing textures (one's smooth, one's textured) made it easy to tell them apart. However, they did feel a bit rattly compared to other mice I've tested in the past. The buttons provide enough tactile feedback, but the nearest one had a bad habit of sticking to my thumb when I pressed down its neighbour, resulting in an irritating bouncing noise when I moved it away.

You can change the function of each side button using Speedlink's free Orios software. There are seven programmable buttons in all including the main right and left click, and Speedlink's intuitive, easy-to-use software gives you a decent range of customisation options to let you personalise your mouse however you like.

As well as switching around its default mouse functions, you can also opt to cycle through five DPI speeds (although there's sadly no 'sniper' button feature to be seen here), enact keyboard commands, media controls, put your PC to sleep or power it off, or use it to record your own macros. There's also the option to enable a 'rapidfire' mode that lets you perform extra clicks with a single tap - handy, perhaps, for FPS games, although for me it ended up becoming more of an annoyance in the end due to all the ammo I ended up wasting in the process.

Still, inept as I am at competitive shooter games, the Orios performed perfectly fine in every other game I tried with it. Its 5000 DPI Pixart 3325 sensor might not be the fastest or most modern sensor out there, but really, even 5000 DPI is too much for my decrepit eyes to catch up with. Instead, I tend to be much more comfortable around the 1600 DPI mark, so the Orios' somewhat limited DPI ceiling didn't really bother me much. Technically, it can reach as high as 10,000 DPI through Speedlink's interpolation tech (which functions in much the same way as the super smooth options on high-end tellys do where it goes all fluid and soap opera like), but as I said, 5000 DPI is more than enough for your average person.

I would, however, recommend lowering the Orios' mouse wheel speed, as I found its default option of '6' was too fast. Instead, I found a '3' to be much more my kind of speed.

Overall, then, the Speedlink Orios is a perfectly fine gaming mouse for those after something small and reasonably light, but there's nothing particularly special about it to make it an absolute must-buy. For those in the UK, it's a decent alternative to other £35 mice such as the Steelseries Rival 310 and Asus TUF Gaming M5, but its higher price in the US means that, for me, the Roccat Kone Pure Owl-Eye still has the edge, if only because Roccat's Easy-Shift+ feature lets you add a second function to each of its seven buttons, making it more flexible overall.