At first glance, the Glorious Model O looks like it would be an absolute nightmare for PC gaming pet owners. With more holes in its ultra lightweight chassis than a block of Swiss cheese, I can already see myself trying to tweezer out clumps of cat hair from it that have somehow managed to waft in to one of its many honeycomb-shaped hollows.

But when the Glorious Model O and its even lighter Model O- sibling, which I've got on test here from the folks over at Overclockers UK, are this lovely to use, I reckon I'd be okay with it. I didn't think it was possible to make a gaming mouse that was lighter than Razer's 69g Viper, but Glorious' holey honeycomb shell means the Model O is able to get down to a mere 67g, while the smaller Model O- is an even more impressive 58g. And man alive does it feel good to swish around your mouse mat.

It's just so light and breezy and responsive under my fingers, as if it's poised and ready to sprint across my mouse mat at a moment's notice. Its symmetrical (but sadly still right-hand oriented) design was also super comfy, and I never had a problem with the honeycomb holes rubbing or grating against my palm, either. Once I had my hand on it, it felt just as smooth as a regular gaming mouse - and most importantly, it didn't make my palms feel all sweaty and gross after I'd finished playing games on it. 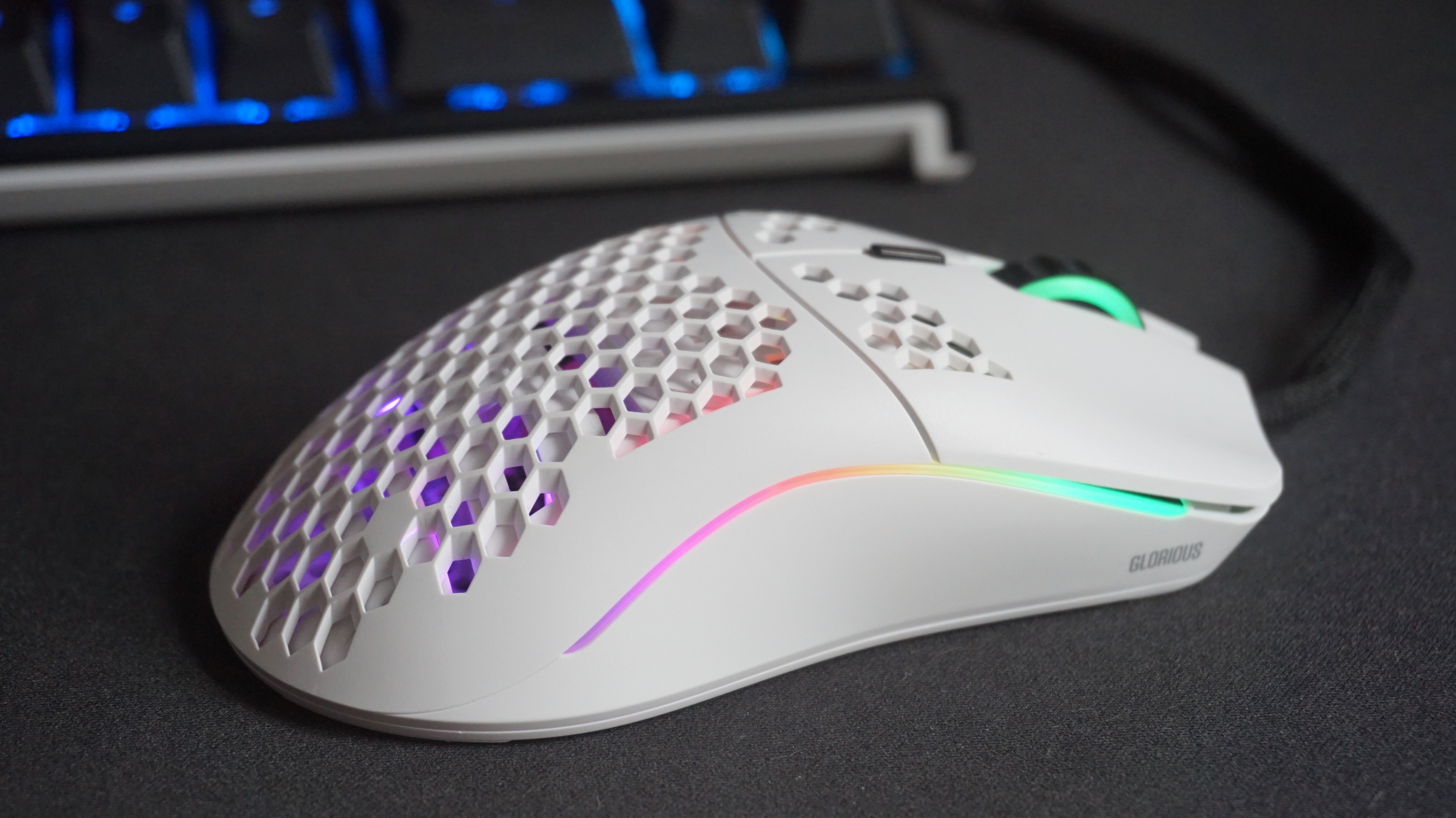 And what a looker it is, too. I'm normally not big into my mouse's RGB lighting, mostly because it feels like such a token effort in the first place. After all, what's the point of having an RGB logo when it's just going to get covered up by my hand? The Glorious Model O, however, really goes to town on it, and I don't think I've ever been more in awe of a mouse's commitment to becoming a full-blown radioactive Skittle.

As well as an RGB scroll wheel, for example, you also get an RGB swish down each side of the mouse, as if it were a radiant, rainbow-infused extension of the luscious locks of Glorious' bearded logo man. However, those swishes also bleed out into the rest of the mouse by virtue of its holey chassis, which I think looks really rather dashing against the white matt shell of my Model O- review sample. Yes, a lot of it's still going to get covered up by your hand most of the time, but there's still enough of it that's visible round the edge of my hand to bring a smile to my face whenever I catch sight of it. 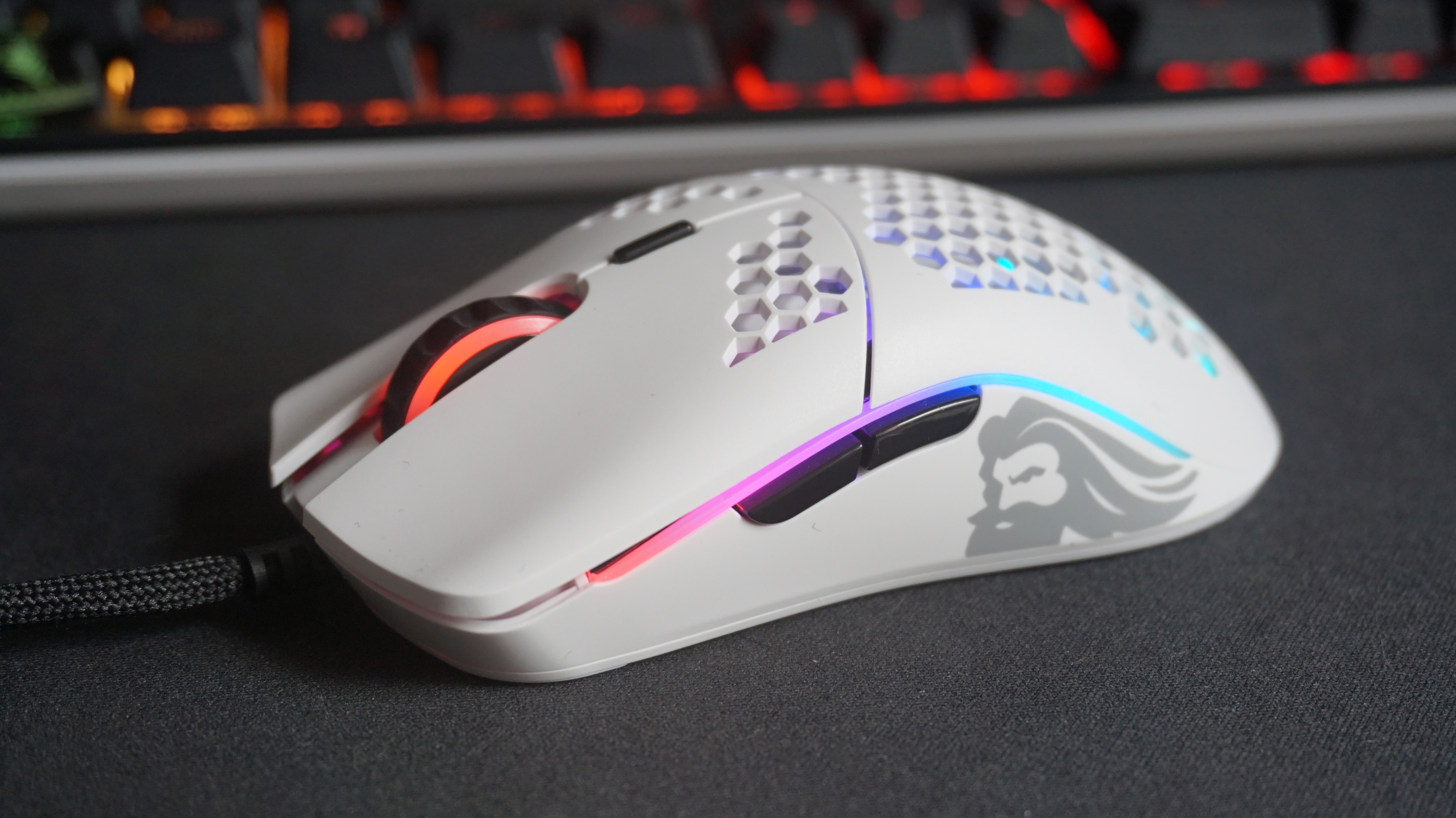 That said, I would imagine that those with larger hands than myself may find the Model O (and by extension the Model O-) a bit too small for their liking, as it really is quite a diddy thing indeed. As mentioned above, I was sent the Model O- for review, and this stands just 36mm off the ground and 120x63mm at its widest, longest points. That's even titchier than the 37.5mm high Model O, whose footprint comes in at 128x66mm. Personally, that's a fantastic size for me, but I doubt that will be the case for everyone.

Still, provided you're down with that kind of size, the Model O and Model O- make for some really great gaming mice. Their Pixart PMW-3360 sensors have a DPI range of 100-12,000, and it comes with four default profiles that are set to 400, 800, 1600 and 3200 DPI out of the box. For me, I found its default speed of 1600 DPI was more than enough for gaming and desktop tasks alike, but you can also enable a further two profiles, as well as adjust said profiles to whatever DPI speed you like, by downloading Glorious' free Model O software. 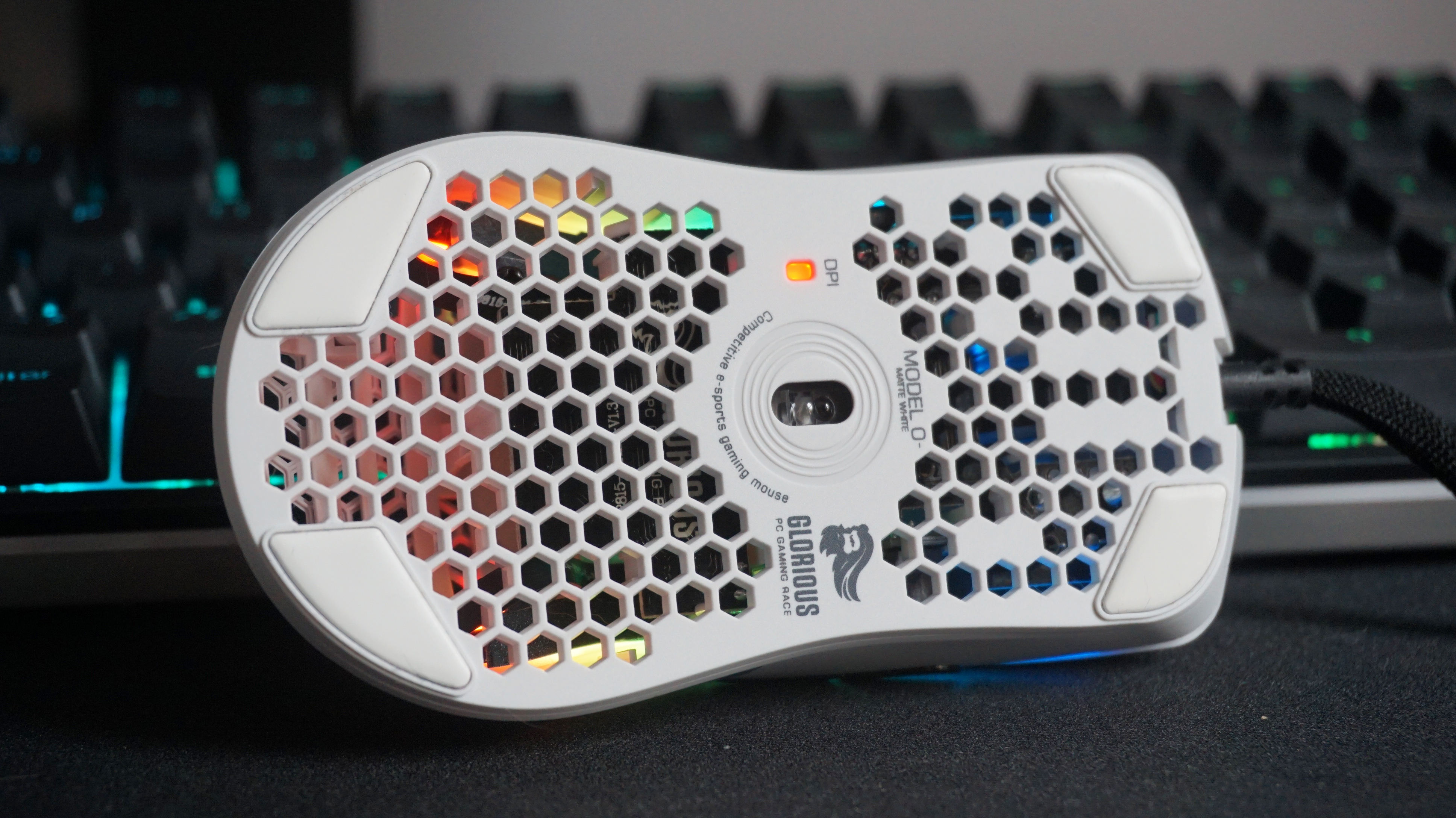 Annoyingly, there's no way of telling which DPI profile you're actually on unless you turn the mouse over and look at the colour of its little DPI light next to the sensor. Even after installing the software, for example, I was hoping it might follow in the footsteps of other gaming mouse software and show me a little onscreen notification when I changed DPI speed, but alas it was not to be. As I said, though, I was more than happy to leave it at 1600 DPI during my testing, so it didn't end up being a particularly big a deal for me.

I'd still recommend downloading its software pack, though, as this is the only way to customise its six programmable buttons. The two side buttons are set to forward and back by default, for example, but these along with the two main clickers, scroll wheel and central DPI button can be changed to all manner of different functions. These include other mouse buttons, a triple click, keyboard combos, macro commands, multimedia controls, or a specific DPI speed for as long as you hold it down - a bit like the Sniper functions available on other gaming mice for slow, easy panning when lining up headshots and the like. You can only set the latter feature to a particular set of speeds unfortunately, the lowest being 400 DPI, but it's great to see this DPI Lock function included nonetheless.

There are also options for changing the Model O's RGB lighting, including turning it all off if you prefer, as well as its lift-off distance, polling rate and debounce time, but most of these can be left pretty much alone unless you're a hardcore competitive type. 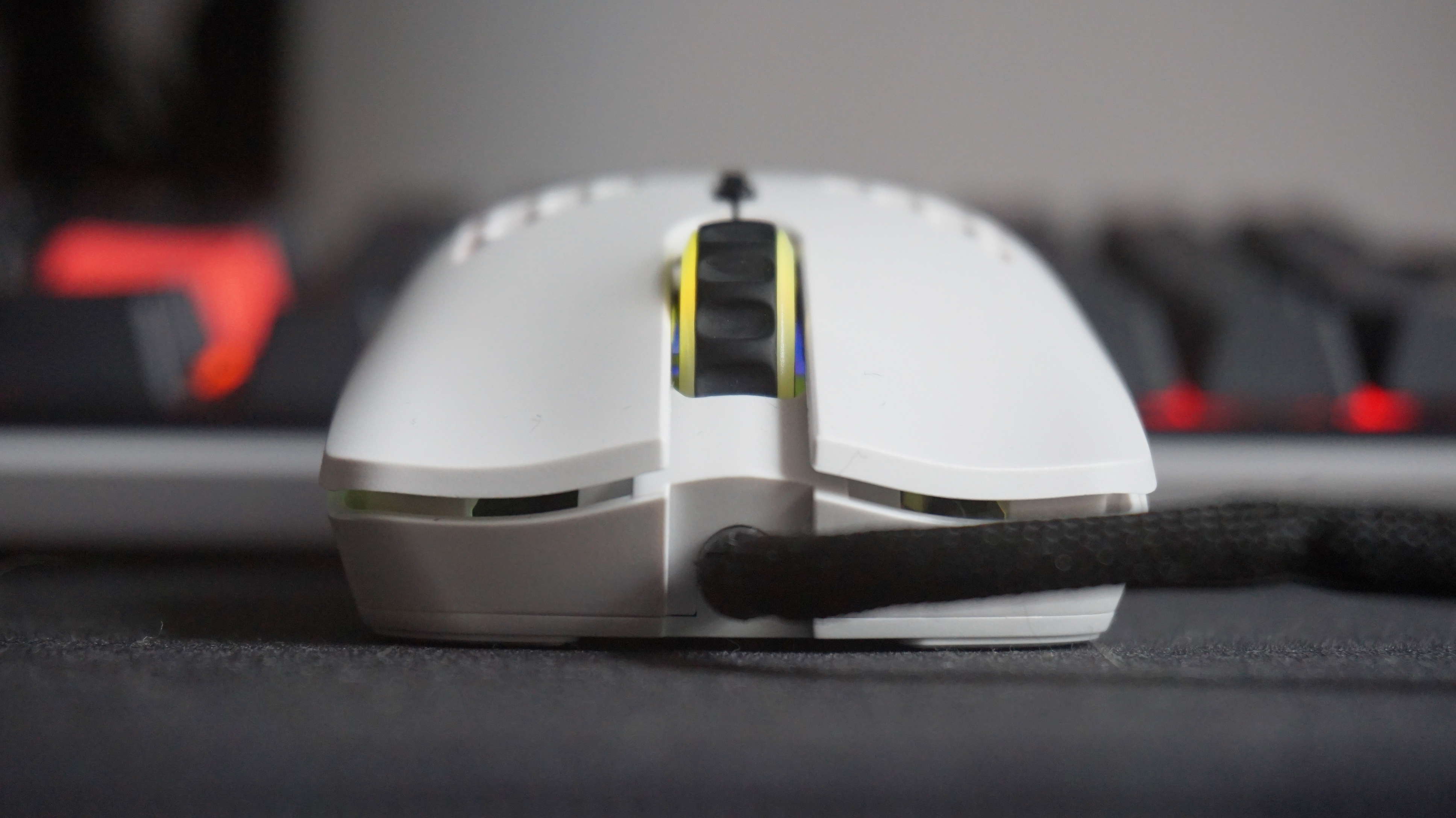 The best thing about the Glorious Model O and Model O-, however, is the price. The latter goes for just £45 / $50 at time of writing, while the slightly larger Model O can be had for £50 / $60. That's much cheaper than the almost as light Razer Viper, and I much prefer it to the similarly priced Steelseries Rival 310 and Roccat Kone Pure, too. The Roccat has the added advantage of even more customisable functions, but for me, the Model O's ultralight chassis far outweighs having a couple of extra controls at my disposal.

Its small size and honeycomb shell won't be for everyone, of course, and there will no doubt come a time when I end up cursing myself for having ever let my two cats near it. But so far I haven't had to get the tweezers out just yet, and that's after a good couple of weeks of having it plonked on my desk, too. Maybe it's the smouldering looks of Glorious' long-haired god man on the side that's kept my cats at bay, or maybe they're just wary of the endless parade of colours pouring out the side. Who can say. What I will say, though, is that I love the Glorious Model O- so much that I'm going to create a brand-new category in my best gaming mouse rankings for it, giving it the illustrious title of being my best mouse for small hands recommendation. A beard that powerful deserves no less.