There have been quite a few new entries in my best gaming mouse list recently, from Corsair's Ironclaw RGB and Harpoon RGB Wireless to Roccat's Kain 120, but almost all of them have been designed with right-handed PC peeps in mind. Finally, however, we might have a new best gaming mouse contender for the lefties among you in the form of the new Razer Viper. An ambidextrous gaming mouse that's both ultra lightweight and highly customisable, the £80 / $80 Viper finally brings some much needed competition to the Asus ROG Pugio and Steelseries Sensei 310. Here's wot I think.

I must admit, I'm not a massive fan of its general look. The ridge separating the back of the mouse from its two main clickers looks ripe for dust collection in my eyes, not to mention being a bit awkward to clean, as does the sunken gangway where its scroll wheel sits. It is, however, gloriously light at just 69g. I thought the 80g Logitech G Pro Wireless mouse was as light as gaming mice could get, but this... this is divine. It's just so easy to swish around my mouse mat, and its comfy shape makes it great to use for long periods of time. Its soft touch rubbery sides also provide plenty of grip for your thumb and little finger regardless of what type of grip you're using, and I never found the back of the mouse getting sweaty from having my palm on it all day - which, in this heat, is quite some going.

The Viper's two side buttons were also very easy to reach with my thumb, and provide a nice, satisfying clicky bit of tactile feedback to let you know you've pressed them properly. That's just as well, really, as they sit quite flush to the rest of the mouse and it wasn't always obvious to me where they were under my thumb. It's something I got used to it over time, but they can feel a bit invisible when you first start using it. 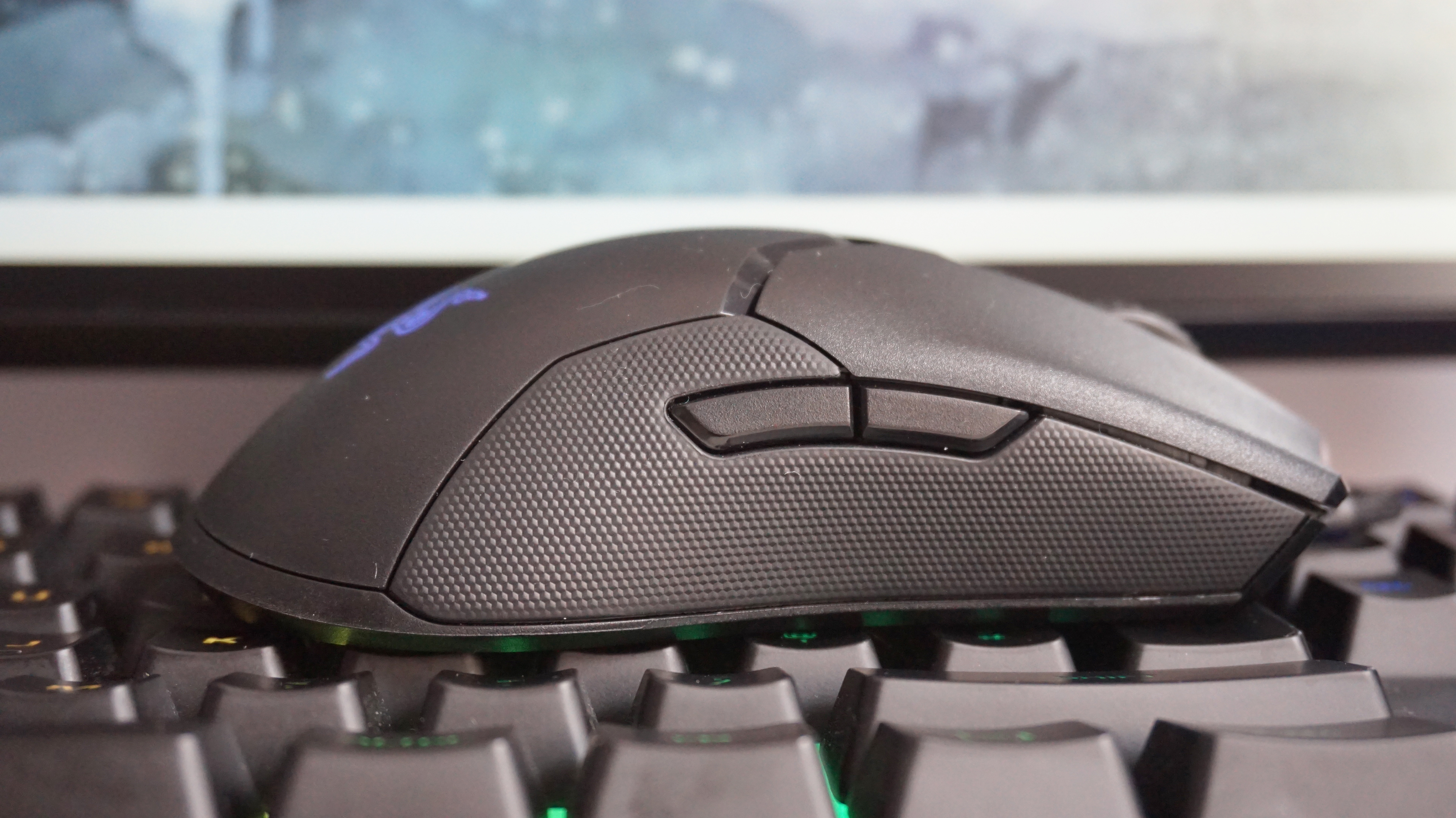 One thing you do notice, however, is the lovely firm feel of the Viper's two main clicker buttons. Razer have decided to make their own optical switches this time round, using infrared light to detect each click, but they actually reminded me a lot of the Titan Switches in Roccat's Kain 120 - which, as you may recall, was one of my favourite things about Roccat's new mouse.

So, too, with the Viper. It's not often I get excited about a pair of mouse buttons, but as I said in my Kain 120 review, this is really "phwoarrr" levels of loveliness. Combined with its ultra lightweight chassis, the Viper just feels great in the hand, regardless of whether you're playing games or simply using it for daily desktop tasks.

It's pretty flexible, too. It has eight programmable buttons in total, although you will need to download Razer's Synapse 3 software before you can start configuring them. Once you do, though, you've got plenty of customisation options at your disposal. There are all the usual Razer options here, including assigning keyboard or media controls to your mouse, rearranging other mouse functions, recording your own macro commands, launching desktop applications or other Windows shortcuts, changing RGB profile, and adjusting its sensitivity speeds. You can also assign one button to be what Razer call a 'sensitivity clutch', which will drop the Viper's DPI to whatever speed you like for as long as you hold the button down - a bit like the 'sniper buttons' you'll find on other gaming mice that can help steady your aim when lining up headshots and the like.

That said, the one thing I can't get my head around is the decision to put the Viper's DPI switch on the bottom of the mouse. Normally, these sit just below the scroll wheel, but this time Razer have decided to hide it altogether and plonk it next to the Viper's sensor. Admittedly, it's not really that much of a problem per se, as I very rarely feel the need to cycle through a mouse's DPI settings when I'm playing games anyway (if only because they're still damn hard to reach without contorting my fingers in some way even when they are within reach beneath the scroll wheel). It still feels odd not to have it in plain sight, though, and just adds a little extra layer of faff when you do need to change sensitivity speed.

Either way, though, you still get five DPI settings to pick from, which you can adjust from a dead-slow 100 DPI all the way up to a lightning fast 16,000 DPI in increments of 50, and, if you really want to, you can also set a different DPI speed for vertical and horizontal mouse movements. I wouldn't recommend enabling this when you're just surfing the web or whatever, but it could be useful for games where you need more control over your up and down movements as you scout for enemies on the horizon, say, but still need to zip round quickly from side to side, for example. 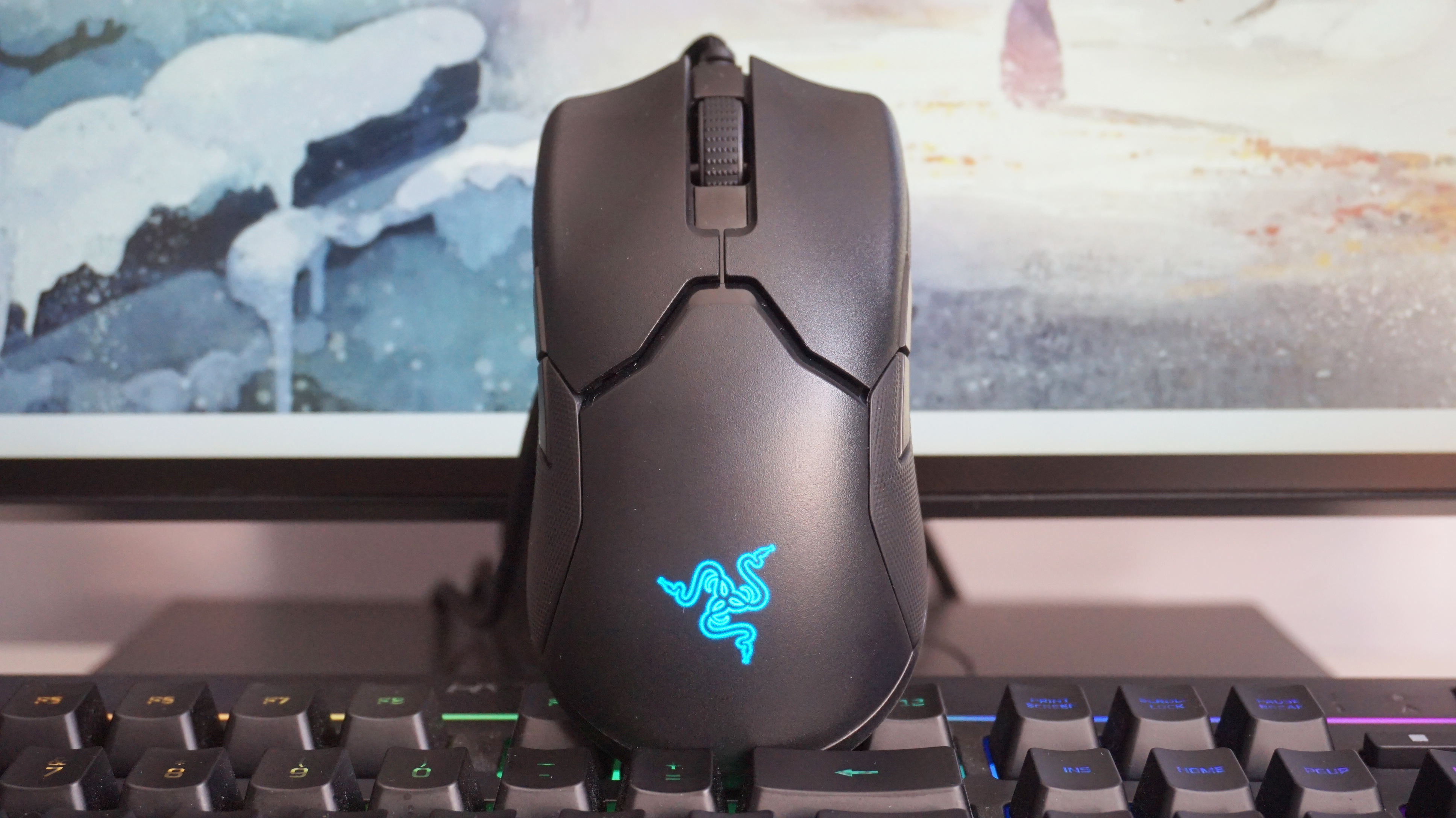 The Razer Viper is by no means perfect, but for all its weird, niggling flaws I reckon it's still one of the best ambidextrous gaming mice I've ever used - and that's mainly down to its comfy design and wonderfully lightweight chassis. It is, admittedly, a lot more expensive than the Steelseries Sensei 310, but in my eyes it's definitely worth the upgrade. Not only does it feel more luxurious than the Steelseries, but it's a heck of a lot more flexible, too.

The same goes for the Asus ROG Pugio. Yes, the Pugio has the added benefit of coming with extra switches and detachable side buttons in the box, but its RGB-laden design isn't nearly as tasteful as the Razer Viper, and it's still only got a 7200 DPI sensor inside it as well. Plus, neither of its main clicker buttons make you feel quite as mighty as the ones you get inside the Viper. If my trusted Logitech G Pro Wireless mouse broke tomorrow, this is the mouse I'd get to replace it (or at least until the Roccat Kain 120 finally comes out, anyway). It's my new ambidextrous gaming mouse of choice.