SpellForce 3 might sound like the name of a magically-inclined superhero team -- and it absolutely should be -- but it’s actually a chimera, a beast created by smashing together an isometric RPG and an RTS. You’ve got your jolly old fantasy adventures, pilfering dungeons and beating up hardworking goblins, and then you’ve got outposts to build, trees to chop down and troops to train. Considered individually, neither layer is going to set the world on fire, but SpellForce 3 is the poster child for being more than the sum of its parts.

I don’t have particularly clear memories of the last SpellForce, which I haven’t played since 2006, so when I felt a twinge of familiarity upon starting my adventure through Eo, a land beset by magical plagues and still reeling from the Mage War -- you know, typical fantasy problems -- it was not because of the previous game, but rather, unexpectedly, Dragon Age: Inquisition. 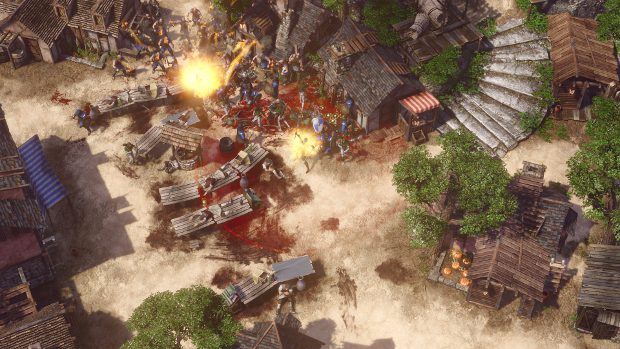 Plenty of comparisons to the BioWare formula in general could be made, but with Inquisition, the similarities are especially strong. Tahar, child of the mad fella on the losing side of the aforementioned Mage War and the game’s protagonist, is a reluctant hero who finds themself gallivanting all over the world, forging alliances, recruiting an army and trying to stop a magical threat that’s poised to make the world a deeply unpleasant place. There’s even an ancient stronghold that can be turned into a base of operations.

It’s familiar, then, but it’s also a proven solid foundation for an RPG. And hybrid though it may be, SpellForce 3 is first and foremost an RPG, complete with shiny loot and customisable character classes. There’s enough crammed inside the 30+ hour adventure that it could be just an RPG without feeling like half a game. It would still be missing something, however. The structure serves it well, not only because it’s tried and tested and, for the most part, replicated here competently, but because it also creates the type of scale that can support a strategy layer. It’s a game that sets cities, nations and races against each other, and while that’s excellent fodder for a roleplaying adventure, it’s also a perfect setting for an RTS. 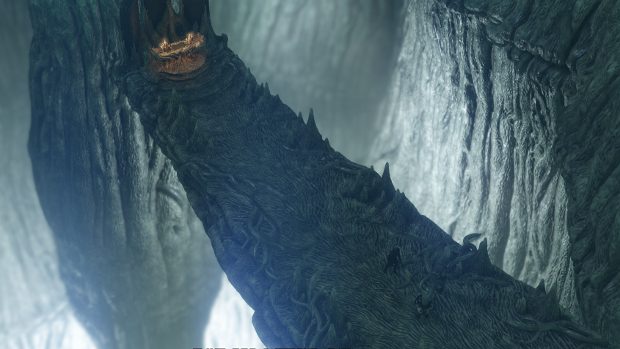 Rather than intermittently switching between RPG and RTS, SpellForce 3 is always an RPG, but sometimes the role switches from adventurer to general. Major quests -- though not necessarily main quests -- often start out as typical roleplaying fare, sending you to find items, rescue the unfortunate and occasionally delve into dungeons, but then it frequently becomes necessary to recruit troops and build outposts. All the time, however, you’re in control of your party, completing quests and getting into scraps.

Though there are the occasional seams -- moments where you have to take off your RPG helmet and put on your strategy beret -- it's mostly cohesive, and the mechanics of each genre complement each other extraordinarily well. If you spot a king’s ransom in loot protected by a fortress full of bandits, for instance, and decide that your chances of surviving are a bit too slim to risk an attack, you might be able to recruit some troops to come and lend a hand. Similarly, an army can benefit from a hero, or the whole party, leading them into battle. 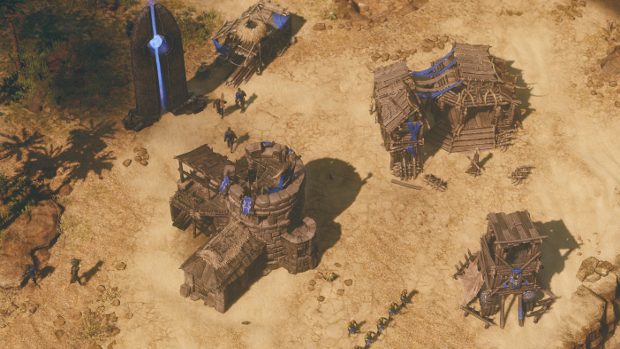 Troops recruited in the barracks just have the one attack, and no special abilities beyond that. So while arsonists are good at demolishing buildings and scouts can chase down fleeing enemies, when it comes to healing or magic, you’ll want to bring in members of your adventuring party. They end up adding a bit of colour to the otherwise traditional rock, paper, scissors dynamic of infantry, archers and cavalry. Companions have three talent trees, one of which is always unique, that let you to cobble together a custom class. Magical archers, geomancer tanks, healing warriors -- SpellForce loves its hybrids. Tahar also gets a fourth tree, Leadership, which applies to the strategy layer specifically.

Combat takes its cue from both RPGs and RTSs. Each character gets three abilities to slot into a loadout, and then three loadouts can be swapped in and out mid-battle -- which isn’t made completely clear, resulting in people thinking they could only use three abilities at any one time. Battles are in real-time, but there’s a whiff of tactics about them thanks to the ‘Click ‘n’ Fight’ system. Hold down Alt and click, and a radial menu pops up and time slows down, letting you select abilities from all of your party. So if you click on an enemy, you’ll be able to launch magic attacks, melee assaults and put an arrow in its eye all at once. For buffs and heals, you can just click on an ally. The radial menu also reveals extra information, like resistances, hinting at the enemy’s strengths and weaknesses. It's an extremely effective way of quickly displaying the most important information while giving you several tactical options. Because the most efficient way to play the game is fully zoomed out, it can be hard to parse a busy fight, but this makes it considerably easier to read and set priorities. 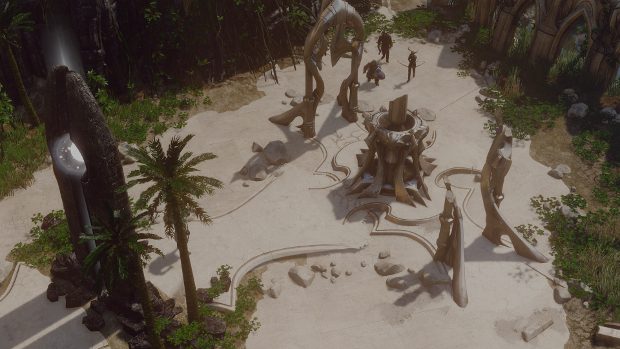 When soldiers are introduced in strategy battles, the same systems apply, but then positioning, terrain and formations also get thrown into the mix. But that’s also when things start to devolve into hectic brawl. Sure, picking the right unit combinations and hero abilities and micro-managing all of them with control groups helps, but throwing a blob of units at another blob of units is also super effective. Enemies just sort of charge in, looking for a fight, any fight, and typically try to win them by using superior numbers, so huge, messy confrontations are extremely common.

While I was still playing, I thought that the strategy layer most closely resembled Age of Empires, but I’ve since realised that there’s a far better, more recent, comparison: Northgard. Like both games, it’s a simple but addictive cycle of gathering resources and workers so you can construct buildings to let you gather more resources until you can eventually field a big army and send your opponent packing. Like Northgard specifically, however, SpellForce 3 is also a game of conquering territory. 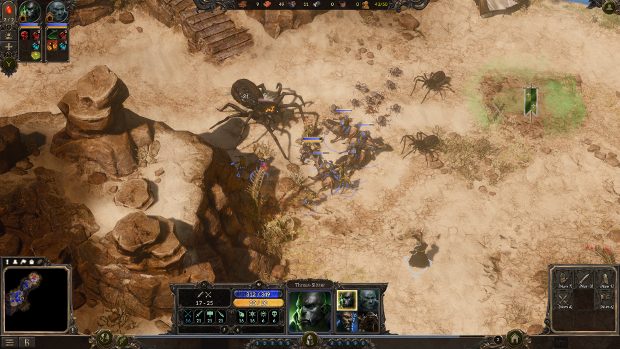 Every map is split up into different regions, each with a limited but varied number of resources. A forest region might have lots of wood and food, while a rocky area will probably have some stone and iron. When your town centre is activated, you get control of a single region, but expansion is immediately necessary. Capturing regions and erecting an outpost boosts the army cap, nets you more workers and unlocks resources required to start constructing more advanced structures and soldiers.

Limited and exhaustible resources and an opponent who will occasionally pinch regions you’ve not settled (and those you have) lend SpellForce 3’s strategy battles a surprisingly brisk pace. Surprising, because there’s never not a lot going on. There are military objectives, quests, bands of unaffiliated enemies, countless stashes of loot -- it’s hard holding down two jobs. The drive to expand and multitude of optional objectives means there’s rarely any lulls or time to realise that, actually, the enemy is far too slow to ever catch up to you. 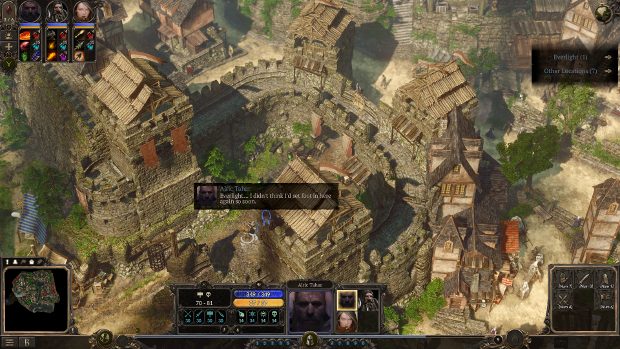 Three different armies can be played with, representing the Human, Orc and Elf factions, though the buildings and troops are largely the same no matter which you use, aside from cosmetic differences. You can recruit them in any order you like, so if you desperately want to start battering folk with your Orc pals, then by all means, start seducing them first. You only need to recruit one ally to progress the story, but you’ll miss a lot of stuff by ignoring the other two.

Each faction’s story is a vignette of the crises engulfing the world, emphasising how each race, despite their opposition to each other, suffers equally. Through quests and new companions, SpellForce gives more reasons to explore the factions than simply getting a cool new army to fling at enemies. Optional though they may be, they feel every bit as important to the narrative as the critical path. 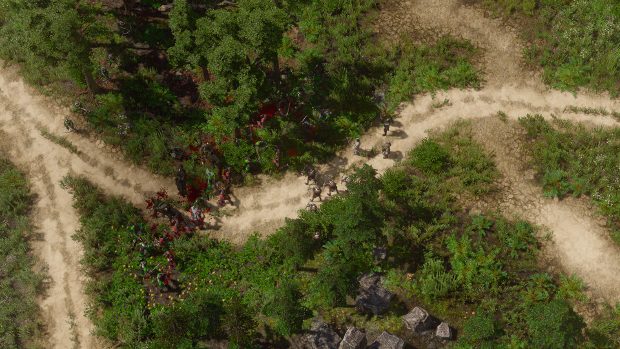 I just wish there were more surprises. There’s barely a story beat or piece of world building that doesn’t feel at least a little staid, though it’s all presented very earnestly. Grimlore absolutely wants you to know that Eo is an interesting place full of fascinating people, and that learning about its history -- strictly speaking, this is a prequel and thus all history -- and conflicts and nobles is pretty compelling. It isn’t. But all the lore and incidental detail is convincing, even if it definitely isn’t worth the amount of time I spent learning about it.

It is at least shuffled in a way that makes it interesting to muddle on, mind you, and the quest to cure the magical plague unravels in a way that rather elegantly links the precarious political and religious situation to a quest that could have easily become a simple ‘hunt for the maguffin’. 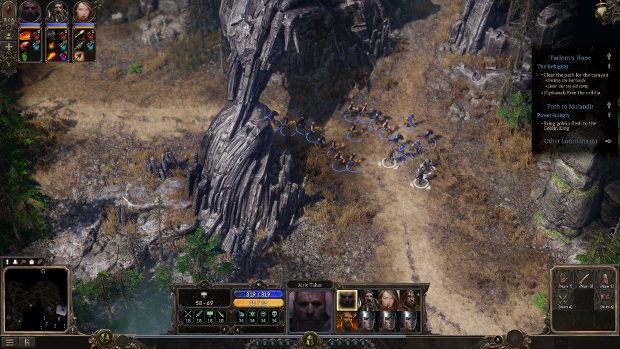 If it’s not already apparent from the screenshots, SpellForce 3 is beautiful, with more than a few hints of the Infinity engine RPGs. Unlike them, however, it’s fully 3D, with a rotating camera that only sometimes struggles with the game’s varied geography. It’s not just the isometric perspective that brings the likes of Baldur's Gate to mind, it’s the use of scale. Massive fortresses, huge monuments, rooms that exist solely to look very, very grand -- it’s constantly showing off and making the heroes look a terribly insignificant in comparison to the huge world they’re journeying through.

A lot of it is illusory, though. SpellForce 3 has all of this space, and nothing to fill it with. What seems like a large hub might only have three people for you to talk to, not including a couple of merchants. It slows down the game, too, forcing you to trek all the way across huge areas that are often devoid of things to do. 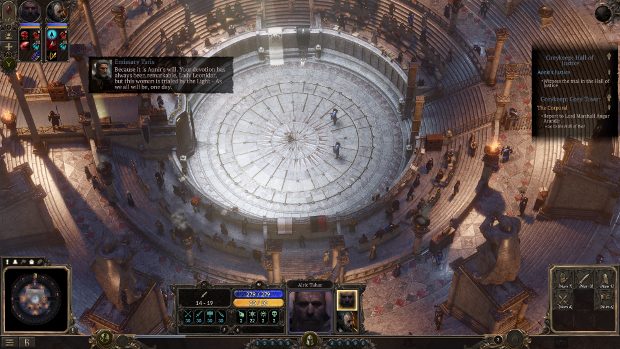 I’ve seen mention of quest bugs and events not triggering, and in my own game I did have to re-enter an area for one quest to actually progress, while certain notifications appeared at the wrong time -- but the game has been largely stable, and Grimlore has been quick to release patches. The more prominent niggles are design oversights. The quest log is constantly automatically expanding, taking up an unnecessary amount of the screen; characters are de-selected upon entering a new area, every damn time; and load screens are often accompanied by a bit a narrator’s introduction that has a tendency to repeat every time you see the screen. They’re all minor, but so frequent that they become proper nuisances.

It’s so bleeding long that I’ve barely had an opportunity to dabble in the multiplayer, aside from a few skirmishes, but so far they seem to work surprisingly well. I wondered if, without the greater context of the adventure and its myriad quests, these discrete battles would feel a little hollow, but with tactically interesting maps full of chokepoints and fortresses and the ability to summon pre-made heroes that differentiate the factions, they’re actually quite robust. 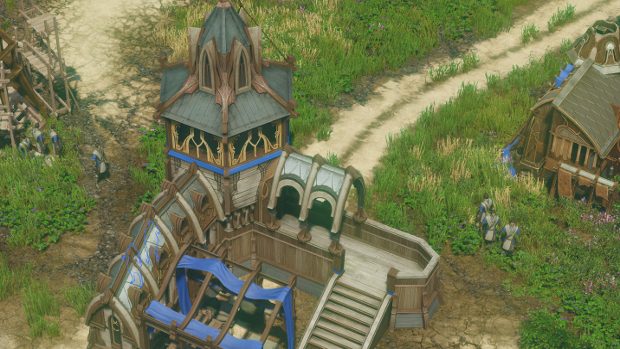 SpellForce 3 is a game that, when pulled apart, doesn’t always come out looking great, but that I’ve still really enjoyed. I get a sort of primal delight in seeing two of my favourite genres blended together competently, and that’s definitely SpellForce -- competent. It probably seems like I’m damning it with faint praise, but it’s a cautious recommendation. So many RPGs give you positions of power and authority but then just throw a few arbitrary choices your way; SpellForce lets you actually wield that authority, both as a sword and a hammer.